March 16, 2022 – At a March 16th hearing, the Court hearing the GVS Portfolio I B cases confirmed the Debtors' Fourth Amended Plan of Reorganization. A confirmation order was subsequently issued on March 21st [Docket No. 873, with blackline noting changes to the order (and modifying the Plan) as proposed on March 15th at Docket No. 867]; with that order reflecting the perhaps surprising developments of March 15th, ie the Stipulation and Agreed Order with World Class Holdings I, LLC (the “WCH Order”) [Docket No. 852] which could see the the once much maligned Natin Paul* "as the sole officer and director of the Debtors."

* Mr. Paul is the founder and ultimate equity owner of the Debtors’ corporate parent GVS Portfolio I C, LLC (“TopCo Debtor”), see the structure chart below.

That eventuality hinges on the outcome of an ongoing investigation of Mr. Paul (the "549 Investigation" which continues at the direction of the Court) relating to alleged post-petition improprieties that ultimately led to a November 2021 "Governance Order" that saw Mr. Paul removed entirely from any involvement with, or management of, the Debtors in favor of Robert Albergotti as sole director.

The fact of the Governance Order pretty much summed up the universally shared (and low) opinion of Mr. Paul and followed multiple calls for the Debtors' cases to be converted to Chapter 7. Perhaps, that opinion has not changed much, with the receiver in respect of several affiliated non-Debtors noting in a March 16th filing [Docket No. 853] as to any attempt to re-install Mr. Paul at the helm of the Debtors: "Putting Mr. Paul in charge would be akin to putting the fox in charge of the henhouse."

What has changed, however, and what may very well pave the way for Mr. Paul's return to the henhouse, is money; ie asset sale proceeds that are comfortable more than enough to pay off everyone and effectively make Mr. Paul's accumulated shade (at least as to these Debtors) go away. If Mr. Paul can overcome the 549 Investigation and behave himself for 120 days, in all likelihood he will soon be comfortably reinconced as the Debtors' sole officer (albeit minus his sold business). More importantly for him, he may also be in control of almost $100.0mn (even after accounting for reserves, see table below).

Looking at the two key recent documents (ie the WCH Order and the proposed confirmation order):

From the WCH Order:

"The 549 Investigation shall be completed within 120 days following the entry of the order approving this Stipulation so long as World Class and all their affiliated enities, managers, and members cooperate reasonably with the the 549 Investigation. The Debtors may seek Court approval to extend the 120-day deadline if cooperation is not coming.

Upon the conclusion of the Claim resolution process and the 549 Investigation, subject to final Bankruptcy Court order, Mr. Paul shall be reinstated as the sole officer of the Debtors."

From the revised (proposed) confirmation order:

On March 9th, after completion of an auction held on February 28th, the Debtors notified the Court that stalking horse CBRE WWG Storage Partners JV III, LLC (the "Stalking Horser" or "Purchaser," an acquisition entity created by CBRE Investment Management, "a leading global real assets investment management firm with $133.1 billion in assets under management as of September 30, 2021) had been designated as their successful bidder with a bid of $588.25mn ($580.0mn cash).

That result was a substantial improvement on the Stalking Horse's $450.0mn opening bid and dramatically changed things for the Debtors…and Mr. Paul.

The WCH Order notes as to the sales proceeds distribution/waterfall and "revised reserves": 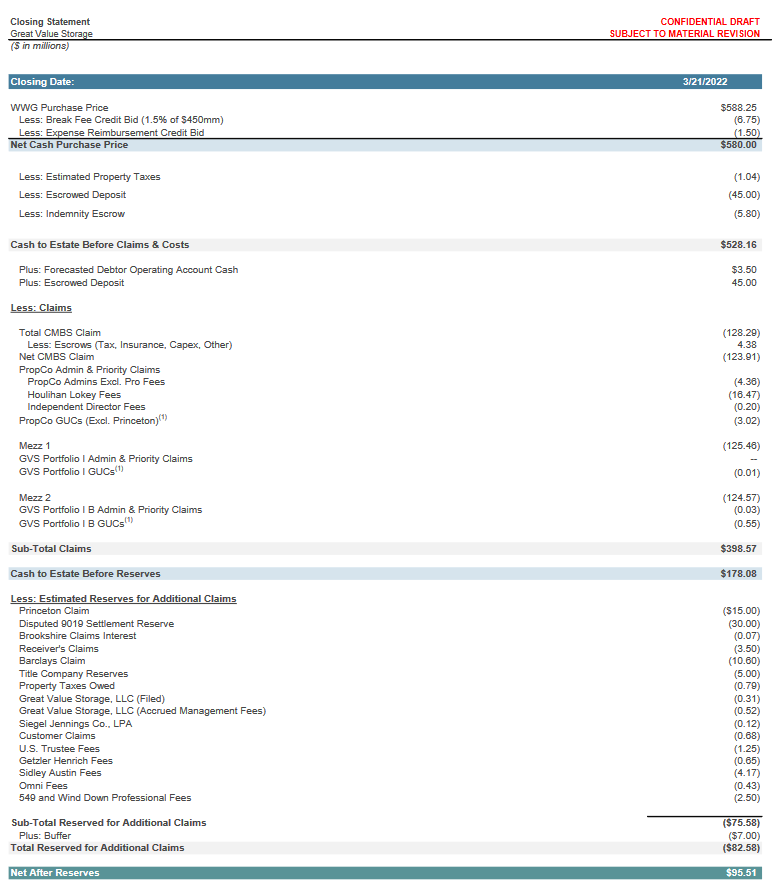 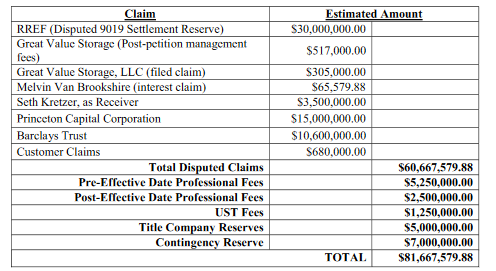 On March 9, 2022, further to a February 1st revised bidding procedures order and completion of an auction held on February 28th, the Debtors filed a notice naming stalking horse CBRE WWG Storage Partners JV III, LLC (the "Stalking Horser" or "Purchaser") as their successful bidder (purchase price $588.25mn*) in respect of the sale of substantially all of their assets [Docket No. 788 as revised by Docket No. 789 to correct a typo in FN3 as to purchase price]. Public Storage was named as the backup bidder.

* The total cash purchase price is $580.0mn, which is comprised of the $588.25mn successful bid less a $8.25mn credit in respect of the Stalking Horse bid protections.

On June 17, 2021, GVS Texas Holdings I, LLC and 13 affiliated Debtors (“GVS” or the “Debtors”) filed for Chapter 11 protection with the U.S. Bankruptcy Court in the Northern District of Texas, lead case number 21-31121 (Judge Jernigan). At filing, the Debtors, a holding company for a chain of storage unit businesses that spreads 10 states and over 60 locations, noted estimated assets between $100.0mn and $500.0mn; and estimated liabilities between $100.0mn and $500.0mn.

Key components of the Plan:

The following exhibits were attached to the Disclosure Statement:

The Debtors filed Plan Supplements at Docket Nos. 778, 796 and 797, attaching the following:

According to the Fourth Amended Disclosure Statement, "The TIAA State Court Action GVS Portfolio Holdings I B, LLC initiated an action against Teachers Insurance Annuity Association of America ('TIAA'), as Junior Mezz Lender, in the New York State Supreme Court (the 'NY Court') on August 27, 2020, styled as GVS Portfolio I B, LLC v. Teachers Ins. Annuity Assoc. of Am., No. 654095/2020 (N.Y. Sup. Ct. Oct. 5, 2020 (the 'TIAA State Court Action').

The TIAA State Court Action sought to enjoin TIAA from pursuing a UCC foreclosure sale. The NY Court initially granted the motion and enjoined TIAA from foreclosing. The NY Court ordered the parties to meet and confer as to the terms of the foreclosure auction, which resulted in the entry of a stipulation (the 'Stipulation') memorializing the terms of the sale. Approximately two days prior to the rescheduled foreclosure auction, TIAA sold the Junior Mezz Loan to RREF without prior notice to the Junior Mezz Debtor.

On April 26, 2021, RREF filed a motion seeking dismissal of the GVS Portfolio Case, arguing the GVS Portfolio Case was not filed in good faith, and was in reality a two-party dispute. Following a hearing on May 26, 2021, the Delaware Bankruptcy Court concluded that the Junior Mezz Debtor had failed to meet its burden to demonstrate that the bankruptcy petition served a valid bankruptcy purpose and, as a result, the case was not filed in good faith. On June 4, 2021, the case was dismissed."

The Debtor is an indirect subsidiary of World Class Holding Company, LLC (“World Class”) and is the indirect owner of 64 self-storage facilities — branded as Great Value Storage, or GVS — located throughout the United States.

World Class is based in Austin, Texas and describes itself as one of the largest private real estate owners in the United States. According to its website, World Class is in the business of acquiring undervalued businesses and assets located in 17 states for the purpose of owning, operating and developing properties. In addition to GVS, World Class purports to own (a) World Class Property Company, a real estate investment company that owns, operates and develops office, retail, multifamily, industrial, mixed-use, hospitality and self-storage assets; (b) NowSpace, a provider of co-working office space; (c) World Class Technologies, a software development company; (d) World Class Mortgage Capital, a private commercial real estate lender; and (e) Westlake Industries, a commercial construction, industrial and energy infrastructure and property services company.

Organizational Chart at Filing (See Exhibit B to Disclosure Statement) 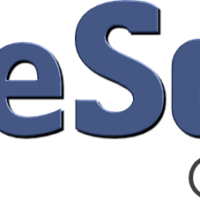