November 15, 2021 – The Debtors filed a motion to extend the periods during which they have an exclusive right to file a Plan, and solicit acceptances thereof, through and including February 12, 2022 [Docket No. 326]. Absent the requested relief, the solicitation period is scheduled to expire on December 14, 2021.

The Debtors argue that with their governance issues settled (further to a November 10th "Governance Order," the Debtors were placed "under the direction" of Alix Partners' Robert D. Albergotti and Natin Paul was comprehensively removed from the Debtors' management structure and any direct input on the management of the Debtors' cases) and a bidding procedures order in hand, their cases are finally poised to see some rapid movement. The bidding procedures order brings forward key auction/sale dates by about 3 weeks in a further sign of the sudden new traction occassioned by the Debtors' breakthrough agreement on governance issues.

The Debtors filed a Plan and related Disclosure Statement on October 4th, albeit with those documents reflecting a now largely dated status quo; those documents centered on a "toggle" Plan clearly leaning towards a stand-alone restructuring (and away from a sale path) to be led by Mr. Paul in the event that he could source financing.

The Debtors' motion explains, “First and foremost, as of November 5, 2021, the Debtors have resolved any control and management issues, have reached agreement on process with their lenders and have obtained this Court’s approval of a marketing process and bidding procedure order…After consultation with the creditors and their advisors, the Debtors believe this process to be value maximizing for the benefit of all parties and understand that each of the secured creditors support an efficient sale….The Debtors, now under the direction of Mr. Albergotti pursuant to the Governance Order, are proceeding with their chapter 11 cases in an orderly and expeditious fashion. A revised Plan and Disclosure Statement are on file and a hearing for the approval of the Disclosure Statement Motion has been set. All that remains is the solicitation process once court approval has occurred. Given the progress of these cases and considering the totality of the circumstances present, the Debtors’ reasonable request for a sixty (60) day extension of the Exclusive Solicitation Period is warranted.”

On November 11th, further to a November 5th hearing, the Court hearing the GVS Portfolio I B cases issued an order approving (i) bidding procedures for the sale of substantially all of Debtors’ assets and (ii) an auction/sale timetable culminating in an auction on February 28th and a sale hearing n March 2022 (exact date TBD) [Docket No. 318].

On November 5th, the Debtors filed heavily revised bidding procedures [Docket No. 306] which substantially bring forward key dates in the auction/sale process. As filed, the Debtors' bidding procedures motion (and its proposed lengthy auction/sale timetable) reflected a process that appeared designed to favor efforts of the Debtors' parent (World Class Holding Company, LLC, or "World Class") to come up with an "Equity Infusion," ie financing that would allow the parent to maintain control of the Debtors and obviate the need for a sale process.

On October 4th, the Debtors filed a "toggle" Plan which, while promising an "immediate" start to a marketing process, reflected a fairly relaxed approach to that marketing that served to give World Class more time to source financing and which left control of the chosen sale-or-stand alone restructuring path largely in the control of World Class and its controversial owner Natin Paul.

The now truncated timetable in the revised bidding procedures order is, however, only part of changes to Chapter 11 cases which now appear to be rapidly slipping out of Mr. Paul's control.

Also discussed at the November 5th hearing were governance proposals that are now memorialized in a November 10th "Governance Order" [Docket No. 319]. That order has Alix Partners' Robert D. Albergotti appointed as sole manager of the Debtors and Mr. Paul resign as officer and director and left with "no role whatsoever with respect to management or operation of the Debtors except a duty to cooperate with Albergotti in accordance herewith."

At his discretion, Mr. Albergotti is charged (with consent of the Senior Lender) with choosing "a new replacement management company from the property manager list provided by Senior Lender." He will also effectively be charged with managing the auction/sale process.

For the time being, the governance order will end calls (by the U.S. Trustee assigned to the Debtors cases and mezzanine lender RREF III Storage LLC (“RREF”)) for conversion of the Debtors' cases to cases under Chapter 7.

The Debtor is an indirect subsidiary of World Class Holding Company, LLC ("World Class") and is the indirect owner of 64 self-storage facilities — branded as Great Value Storage, or GVS — located throughout the United States.

World Class is based in Austin, Texas and describes itself as one of the largest private real estate owners in the United States. According to its website, World Class is in the business of acquiring undervalued businesses and assets located in 17 states for the purpose of owning, operating and developing properties. In addition to GVS, World Class purports to own (a) World Class Property Company, a real estate investment company that owns, operates and develops office, retail, multifamily, industrial, mixed-use, hospitality and self-storage assets; (b) NowSpace, a provider of co-working office space; (c) World Class Technologies, a software development company; (d) World Class Mortgage Capital, a private commercial real estate lender; and (e) Westlake Industries, a commercial construction, industrial and energy infrastructure and property services company. 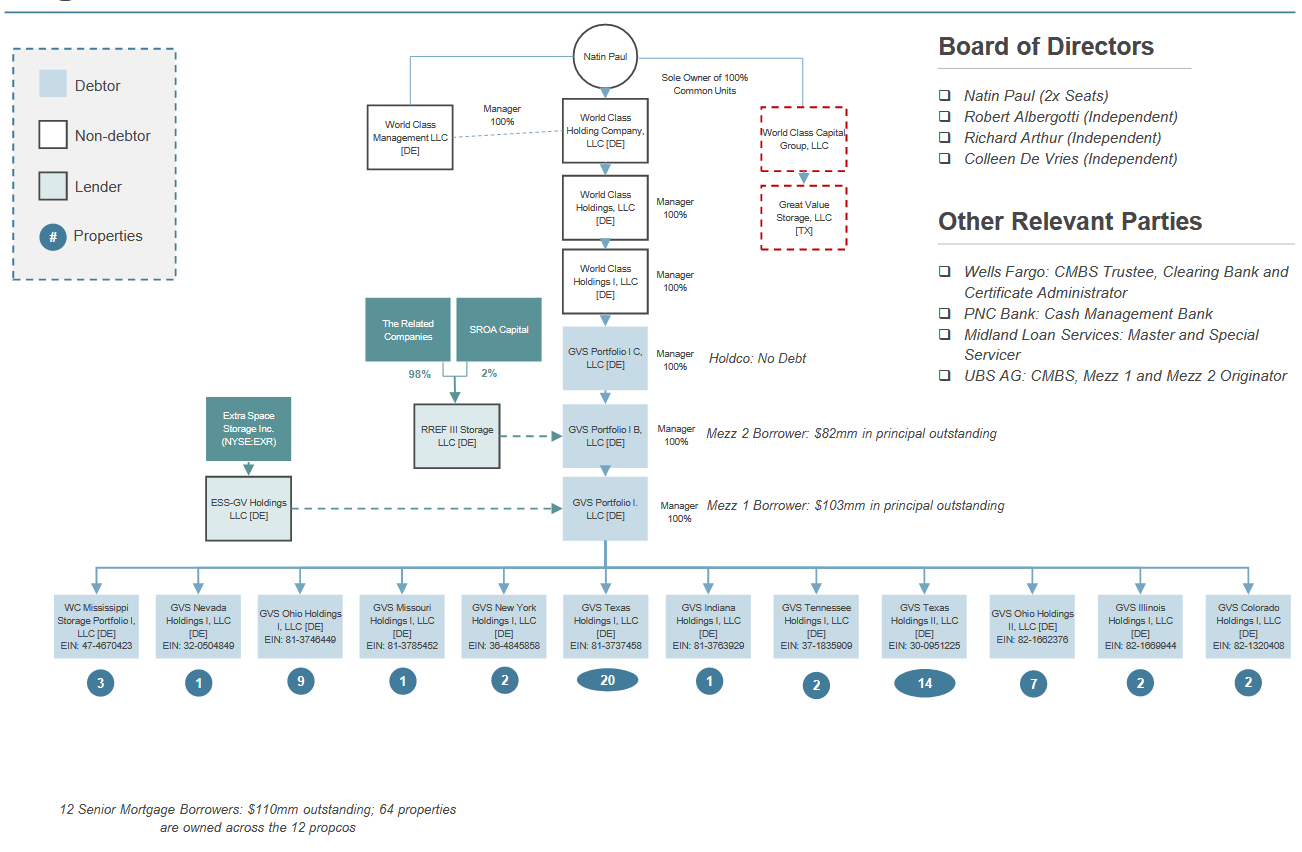