November 30, 2021 – In advance of its December 6th Plan confirmation hearing, the Debtor filed an Amended Combined Plan of Liquidation and Disclosure Statement (the “Combined Document”) which attaches a redline (changed pages only) showing changes to the version filed on October 28, 2021 [Docket No. 651, with redline at Exhibit 6]. The amendments are non-material modifications and do not impact classes or claims otherwise summarized unchanged below.

On October 28, 2020, the Debtor, a Dearborn, Michigan, operator of premier senior living communities, filed for bankruptcy protection noting estimated assets between $50.0mn and $100.0mn; and estimated liabilities between $100.0mn and $500.0mn.

At filing, the Debtor noted that it would use Chapter 11 to explore its restructuring and/or sale options; with the Debtor ultimately settling on a sale process which culminated in a $76.3mn going concern sale of substantially all of its assets to an affiliate of Sage Healthcare Partners.

As noted below, the proceeds of the sale were used to pay in full the Debtor's prepetition $52.33 bond debt (plus $5.0mn of interest) and the Debtor's DIP financing. Holders of general unsecured claims (including $44.2mn of resident claims) are to receive an estimated 24% recovery (not including an estimated $8.0mn of rights of action claims), but that comes with numerous provisos (to maintain a claim, a resident either has to move out or begin paying market rent) that are ultimately designed to push residents into a new contract which includes a sliding scale of refund payments beginning with 8% (see "Entrance Fee Claims" below).

The following is an unchanged summary of classes, claims, voting rights and expected recoveries (defined terms are as defined in the Combined Document; see also the Liquidation Analysis below):

(a) enter into a Base Lease accompanied with an Addendum, thereby foregoing a Claim in the Chapter 11 Case against the Debtor and instead receiving the Bankruptcy Commitments, along with accepting the Entrance Fee Refund Program which is applicable to Current Resident Entrance Fee Claimants only; or

(b) entering into a Base Lease at a market rate rental amount and thereby retaining an unsecured Claim in the Chapter 11 Case and foregoing any benefits  associated with the Bankruptcy Commitments and the Entrance Fee Refund Program; or

(c) voluntarily leaving the Facility in accordance with the terms of the Residency Agreement and retaining a Claim in the Chapter 11 Case against the Debtor’s assets."

with the Entrance Fee Refund Program providing for refunds based on the number of years that a resident stays alive and at the facility following the sale.

On May 25, 2021, the Court hearing the Henry Ford Village case issued an order approving the $76.3mn sale of substantially all of the Debtor’s assets to HFV OPCO, LLC (the “Successful Bidder,” an affiliate of Sage Healthcare Partners) [Docket No. 436]. The executed APA was attached to the order.

On May 6th, the Debtor notified the Court of auction results which included the selection of the stalking horse, an affiliate of MED Healthcare Partners ($69.0mn bid) as the back-up bidder. The back-up bidder (stalking horse APA filed at Docket No. 355) will be entitled to a $1.905mn break-up fee.

In a press release announcing the approval of the sale, the Debtor stated: “[the Court] has approved the sale of substantially all of HFV’s assets to HFV OPCO, LLC, an affiliate of Sage Healthcare Partners (‘Sage’), for $76.3 million, subject to entry of final agreed orders. The transaction remains subject to regulatory approvals and customary closing conditions, and HFV anticipates the sale will be completed in approximately 90 to 120 days.

The path forward for the community centers around its inclusion in Sage’s network of senior living communities, and includes plans to increase programmatic activities for residents and employees while investing to improve HFV’s campus more broadly. Sage has also pledged to uphold HFV’s current commitments to maintain the health, safety and lifestyle of its residents.”

Sale proceeds were to be used as follows: 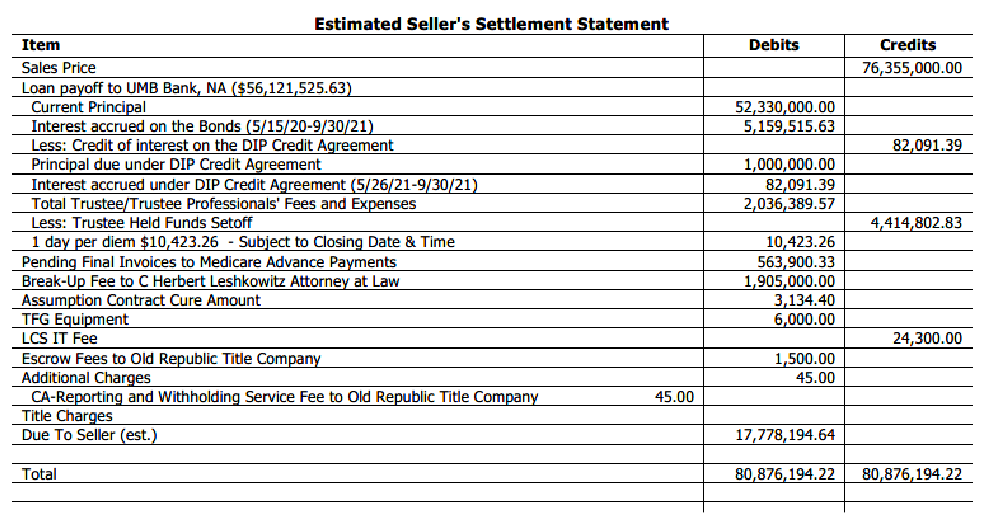 According to the Combined Document, "On June 10, 2020, the State of Michigan Department of Licensing and Regulatory Affairs ('LARA') issued the LARA Order requiring all entrance fee payments made in connection with execution of a HFV Residence and Care Agreement on or after June 10, 2020 to be placed in escrow with a third party escrow agent (the 'LARA Escrow Order'). After working closely with LARA to develop the LARA Escrow Agreement and process, an escrow account was established to hold entrance fee payments subject to the LARA Escrow Order."

Holders of LARA Escrow claims are covered by Class 1 of the Combined Document.

In addition, according to an April 22, 2020 Legal Notice, the Wayne County Circuit Court had preliminarily approved a Class Action Lawsuit settlement under which the Debtor and other defendants have agreed to pay $1.15mn to a Settlement Fund to be distributed over time to Class Members. The Settlement was approved on a final basis on August 21, 2020, according to court documents linked to a website providing information on the Lawsuit.

According to the notice, “The Lawsuit was filed on behalf of Henry Ford Village (‘HFV’) residents, former residents and the estates of former residents who signed a ‘Residence and Care Agreement’ prior to December 1, 2000. The Lawsuit alleges that HFV and certain of its property managers have not been refunding 100% of some of these residents’ entrance deposits when residents vacate their units at HFV. [Lead Plaintiff David] Plumley alleged that Defendants misled certain of the residents (or the representatives of their estates) into signing an amendment or addendum that reduces their refund from the amount promised in residents’ original Residence and Care Agreement to an amount less than the 100% entrance deposit refund. Mr. Plumley also alleged that certain other residents who did not sign an amendment or addendum have not received the refund to which they are entitled. Defendants HFV and its property managers denied all of these claims in the Lawsuit and asserted many defenses, including that all residents (or their representatives) have been or will be paid the full refunds to which they are contractually entitled.”

Board minutes included in the Petition provide: “Dykema provided a thorough and detailed presentation of legal issues relevant to the financial situation of the Corporation, including a report on a recent hearing regarding the Plumley litigation. The Board discussed the information presented by Dykema regarding legal options including the potential of filing a voluntary petition for relief for the Corporation under the bankruptcy provisions of chapter 11 of title 11 of the United States Code, the bankruptcy process and the interview process for investment bankers, marketing companies and other advisors to the Corporation with respect to a potential sale of the Corporation’s facility in conjunction with any bankruptcy proceedings.”

According to the Debtor: “The Debtor is a not for profit, non-stock corporation established to operate a continuing care retirement community located at 15101 Ford Road, Dearborn, Michigan 48126. Debtor provides senior living services comprised of 853 independent living units, 96 assisted living unites and 89 skilled nursing beds. (the ‘Facility’). Debtor is governed by an independent Board of Directors and is advised by a Resident council elected by the residents of Debtor.”