The Debtors are currently 46.45% owned by GFW Energy XI LP, an affiliate of energy-focused private equity house NGP. Significant shareholders of publicly traded Bonanza Creek (NYSE: BCEI, which has its own operation centered around the overlapping Niobrara Oil Shale play and with whom the Debtors will be merged upon emergence from bankrupcty) include BlackRock, Inc. (14.4%), FMR LLC (12.1%), Mangrove Partners (10.0%), Dimensional Fund Advisors LP (8.1% and the Vanguard Group (6.1%) (the 2020 Bonanza Creek Proxy Statement is here).

On March 12th, the Debtors and Bonanza Creek announced in a Prospectus supplement that they had not been able to meet the 97.5% "Minimum Participation Condition" required to complete the proposed restructuring and merger as part of an out-of-court exchange offer. They were close to this ambitious mark, but holders of the 2022 notes came up short (89.19%); requiring the Debtors to pivot to Chapter 11 and its more generous thresholds (a majority of holders and at least two-thirds of the aggregate principal of the aggregated 2022 and 2025 Senior Notes), which they comfortably have.

In a press release announcing the filing, the Debtors advised that they had filed for Chapter 11 “to effectuate the previously announced prepackaged plan of reorganization (the 'Prepackaged Plan') and consummate the transactions pursuant to the Agreement and Plan of Merger, dated as of November 9, 2020, by and among Bonanza Creek Energy, Inc. ('Bonanza Creek'), HighPoint and Boron Merger Sub, Inc. (the 'Merger Agreement'). The Prepackaged Plan implements the merger and restructuring transactions contemplated under the Merger Agreement and TSA (as defined below).

On March 12th, Bonanza Creek filed a press release announcing that its proposed merger with the Debtors had been approved by its own shareholders, the contents of that release are substantially identical to the Debtors' own.

As to the length of the Debtors' stay in Chapter 11, court filings indicate that the Debtors intend to request a combined hearing on confirmation of the Plan and the adequacy of the Disclosure Statement "on or about March 17, 2021." The Debtors have already filed their proposed Plan confirmation order and memorandum of law in support of Plan confirmation [Docket Nos. 26 and 23, respectively].

The TSA provides longstop dates of 45 days and 60 days after the Petition date for Plan confirmation and effectiveness, respectively.

The Disclosure Statement provides: “The Plan implements a comprehensive restructuring and certain recapitalization transactions, whereby, among other things, Boron Merger Sub Inc. (‘Merger Sub’), a wholly owned affiliate of Bonanza Creek Energy, Inc. (‘BCEI’), will merge with and into HighPoint Resources Corporation as contemplated under that certain Agreement and Plan of Merger, dated as of November 9, 2020 (such transaction, the ‘Merger’, and such agreement, the ‘Merger Agreement’), a copy of which is attached hereto as Exhibit B, and the Debtors will equitize more than $625 million of funded debt and undertake such other transactions contemplated under the Merger Agreement and that certain Transaction Support Agreement, dated as of November 9, 2020 (the ‘TSA’), a copy of which is attached hereto as Exhibit C. After giving effect to the Merger and such restructuring transactions,

Holders of approximately 86% of Notes Claims (the ‘Consenting Noteholders’), and Holders of approximately 46.5% of Existing HPR Interests (the ‘Consenting Shareholders’) are party to the TSA and support the Merger and the Plan. Holders of RBL Claims and general unsecured creditors are unimpaired. As set forth herein, the Restructuring Transactions may be implemented on either an out-of-court or in-court basis, depending on the level and timing of consents achieved in connection with the out-of-court process and the other conditions set forth in the Merger Agreement and the TSA. This Disclosure Statement relates to the in-court process. The proposed implementation process facilitates an efficient road to confirmation of the Plan, the subsequent consummation of the Merger, and the restructuring transactions contemplated by the Plan, the TSA, and the Merger Agreement, supported by appropriate due process, and timely emergence from chapter 11.”

The Disclosure Statement, which was drafted and distributed to stakeholders while an out-of-court restructuring was still being considered, continues: "The Plan implements the Merger and the restructuring transactions contemplated under the Merger Agreement and the TSA. The Plan includes the following key features:

If [as turned out to be the case] the Debtors are unable to obtain the necessary consents or satisfy the other conditions to consummate the transactions on an out-of-court basis and the other requisite conditions to filing the Plan as set forth in the Merger Agreement and the TSA have been satisfied, the Debtors anticipate commencing the Chapter 11 Cases on or about March 16, 2021, and requesting confirmation of the Plan as soon as reasonably practicable thereafter.

The TSA contains certain milestones, including securing confirmation of the Plan within 45 days after the Petition Date, and the occurrence of the Effective Date within 60 days after the Petition Date, and additional milestones as set forth herein. The timeline from the distribution of this Disclosure Statement to the anticipated confirmation hearing provides all parties in interest a full and fair opportunity to participate in the process."

A familiar story featuring a sustained period of commodity price pressures as compounded by the Saudi/Russia spat, COVID-19 and the storage shortage that resulted "the drastic decrease in demand and corresponding over-supply of oil, natural gas and NGLs." The result being that "[i]n the first ten months of 2020, 43 E&P companies have filed for chapter 11, with these Debtors following suit after a pair of borrowing base redeterminations reduced borrowing headroom from $500.0mn to $200.0mn.

The Disclosure Statement provides: “The difficulties initially faced in 2020 by the Debtors are consistent with those faced industry-wide. Volatile market conditions have challenged oil and gas companies and others for years. From January 1, 17 2014 until April 20, 2020, WTI crude oil prices ranged from a high of $107.26 per barrel to a low of -$37.63 per barrel; during that same period Henry Hub natural gas prices ranged from a high of $6.15 per mmbtu to a low of $1.55 per mmbtu. In early 2020, the initial spread of COVID-19 caused decreased factory output and transportation demand, resulting in a decline in energy prices. To address this, OPEC, led by the Kingdom of Saudi Arabia, called for additional cuts in oil production, subject to agreement by Russia. However, those initial efforts faltered, and the parties failed to reach an agreement as to production levels. Instead, both the Kingdom of Saudi Arabia and Russia announced that they would increase, rather than decrease, production, resulting in surplus supply amidst already decreasing demand for energy.

Meanwhile, the COVID-19 pandemic continued and continues to spread, causing governments across the world to institute strict public health and safety measures, including stay-at-home orders that have further decreased energy demand. On April 12, 2020, in an effort to relieve some of the negative impacts on the industry, 23 countries agreed to commit to withholding 9.7 million barrels of oil per day from the global markets. However, that agreement was not enough to counteract the combined effects of the initial price war and the decreased demand due to COVID-19. The corresponding effects on energy markets have been severe. In March 2020, oil prices plummeted to near $20 per barrel, which was the lowest in nearly twenty years until April 20, 2020, when the WTI crude oil price for May contracts settled at a negative price for the first time in history.

The effect of recent events on companies in the oil and gas industry (not just E&P companies) has been undeniable. However, independent oil and gas companies such as HPR have been especially hard hit, as their revenues are primarily generated from the sale of oil, natural gas, and NGLs. Making matters worse, the drastic decrease in demand and corresponding over-supply of oil, natural gas and NGLs led to an unprecedented storage shortage. Oil and gas companies were left with no option but to consider wellshut-ins and other production measures to address the impending storage issue.

The current volatility in commodity markets has made it especially difficult for some companies to execute on out-of-court restructuring alternatives. In the first ten months of 2020, 43 E&P companies have filed for chapter 11.

As of September 30, 2020, the Debtors had  approximately $765.0mn in aggregate outstanding principal of funded debt obligations, the details of which are set forth in more detail in the table below: 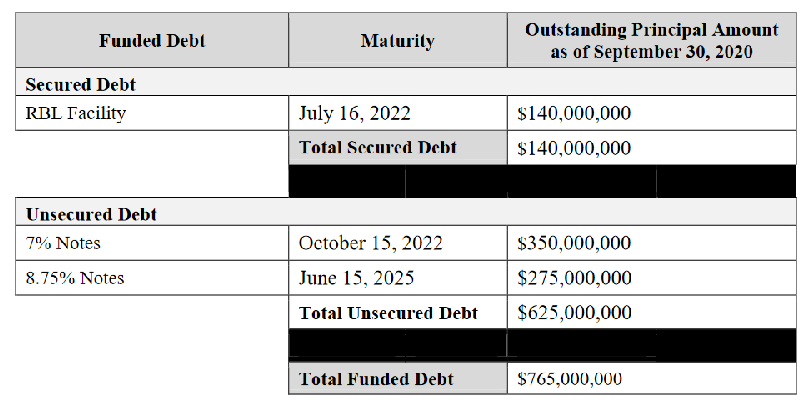 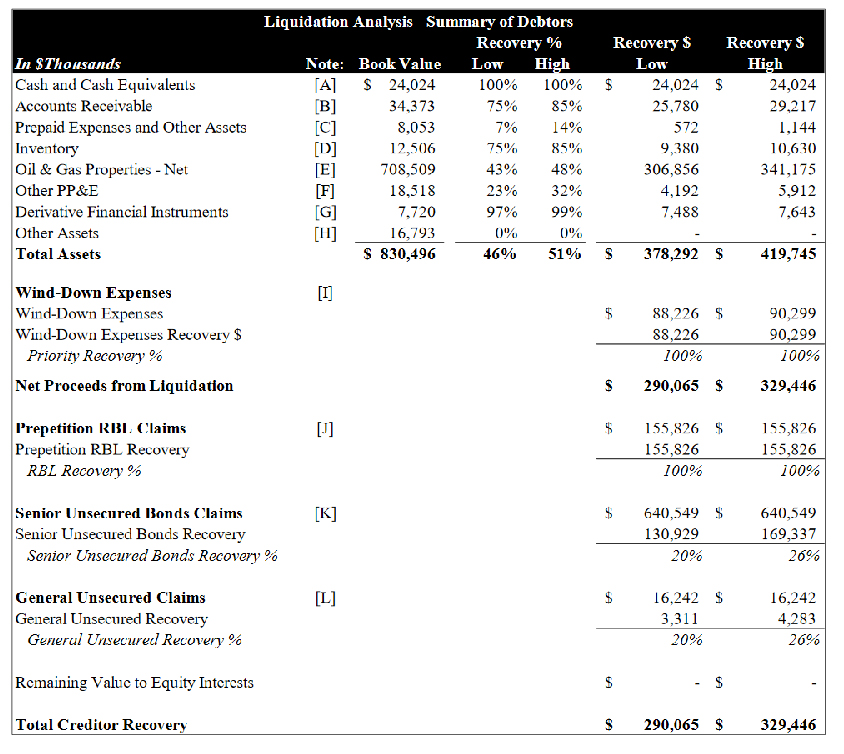 According to the Debtors: "Headquartered in Denver, Colorado, the Debtors are an oil and gas company engaged in the exploration, development and production of oil, natural gas, and natural gas liquids ('NGLs'). The Debtors’ primary production and development activities are located in the Denver-Julesburg ('DJ') Basin in Colorado’s eastern plains. As of December 31, 2019, the Debtors held (i) interests in approximately 568 gross wells, a substantial majority of which are Debtor-operated, (ii) approximately 142,600 net acres of developed and undeveloped leasehold, and (iii) estimated proved developed reserves of approximately 51 million barrels of oil equivalent, in the aggregate, of oil, natural gas and natural gas liquids based on Securities and Exchange Commission parameters"

According to Bonanza Creek: "Bonanza Creek Energy, Inc. is an independent oil and natural gas company engaged in the acquisition, exploration, development, and production of oil and associated liquids-rich natural gas in the Rocky Mountain region of the United States. The Company’s assets and operations are concentrated in rural, unincorporated Weld County, Colorado, within the Wattenberg Field, focused on the Niobrara and Codell formations. The Company’s common shares are listed for trading on the NYSE under the symbol: “BCEI.”