November 23, 2020 – The Debtors filed a First Amended Plan of Liquidation and a related Disclosure Statement [Docket Nos. 529 and 530, respectively]; and separately filed redlined versions of each showing changes to the version filed on November 9, 2020 [Docket No. 531]. The lightly amended Plan documents do not contain material changes to classes and claims, otherwise summarized below.

The Disclosure Statement notes, “The Plan is a plan of liquidation and will be funded by the ‘Liquidating Trust Assets’ consisting of, (a) the Cash held by the Estates after taking into account Distributions made on the Effective Date; (b) all Causes of Action; (c) all Privileged Documents and communications of the Debtors; (d) all other assets of the Debtors or of the Estates existing on the Effective Date after giving effect to all Distributions required to be made as of or prior to the Effective Date, including but not limited to all books, records and files of the Debtors and of the Estates, in all forms, including electronic and hard copy. The Plan also creates a Liquidating Trust, which will be the mechanism through which Claims will be adjudicated and distributions will be made as set forth in the Plan.”

The following is a summary of classes, claims, voting rights and expected recoveries (defined terms are as in the Plan and/or Disclosure Statement):

As of the Petition date, the Debtors had approximately $162.1mn of liabilities, of which approximately $39.8mn is secured debt owed in respect of a senior credit facility with Cortland Capital Market Services LLC, as Collateral Agent and Administrative agent, CB Agent Services LLC, as Origination Agent and the parties identified as lenders therein (collectively, the “Lenders”).

The Plan incorporates a settlement agreement (the "Settlement Agreement') amongst the Debtors, the Debtors' Official Committee of Unsecured Creditors (the "Committee'), prepetition lenders and DIP lenders. The Settlement Agreement, which was approved by the Court on November 2, 2020 in a "Lender Settlement Order" [Docket No. 504], requires the Prepetition Lenders to make a $400k initial cash payment no later than three days after the settlement order was entered and, only if the Plan containing the terms of the Lender Settlement is confirmed, a second $100k cash payment on the Plan Effective Date.

According to the Disclosure Statement, "The Committee’s notice of 'Initial Challenges' asserted the following against the Prepetition Secured Parties:

In a declaration in support of the Chapter 11 filing (the “Boone Declaration”), Rick Boone, the Debtors’ Chief Executive Officer, detailed the events leading to Rhino’s Chapter 11 filing. The Boone Declaration provides: “The North American coal industry is intensely competitive and over the past several years, market forces in the industry have affected a number of coal companies, many of which have filed for chapter 11.

While the metallurgical coal market has been favorable until approximately the third quarter of 2019, the market has declined substantially since the fourth quarter of 2019, resulting in a sustained low-price environment. In addition, coal mining requires a high level of capital expenditure to sustain production and to maintain safety requirements.

According to the Debtors: “Rhino Resource Partners LP is a diversified energy limited partnership that is focused on coal and energy related assets and activities, including energy infrastructure investments. Rhino produces metallurgical and steam coal in a variety of basins throughout the United States.” 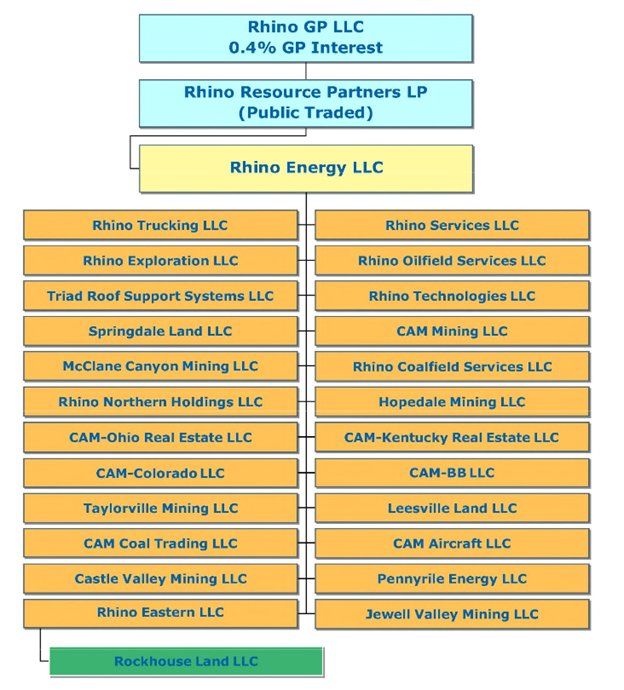