On May 6, 2019, Privately-held Hospital Acquisition LLC and 25 affiliated Debtors (trading as Lifecare Health Partners, "LifeCare" or the "Debtors") filed for Chapter 11 protection with the U.S. Bankruptcy Court in the District of Delaware, lead case number 19-10998. At filing, the Debtors, a leading operator of long-term acute care (“LTAC”) hospitals in the United States, noted between 25,000 and 50,000 creditors; estimated assets between $100.0mn and $500.0mn; and estimated liabilities between $100.0mn and $500.0mn. In the Schedule of Assets and Liabilities of affilate Debtor (and holding company) LifeCare Holdings LLC [Docket No. 312, see also Pre-Petition Organizational Chart, below], the Debtors refine their asset and liabilty positions, noting estimated assets of $155.1mn and estimated liabilities of $182.7mn. The Debtors, whose limited distributable proceeds come from asset sales (described below), blamed changes in Medicare coverage criteria for LTAC facilities and an unmanageable level of debt service obligations for their demise.

On August 19, 2019, the Court approved the sale of the bulk of the Debtors' hospital assets to stalking horse bidder PAM Squared, LLC [Docket No. 519] and the sale of the Debtor's LifeCare Hospitals of Pittsburgh (Alle-Kiski Campus) to Select Medical Corporation [Docket No. 520]. Each of the two orders attached the relevant asset purchase agreement.

The following assets were sold to stalking horse PAM Squared, LLC for consideration of $34.5mn:

On August 21, 2019, the Court issued a sale order approving the sale of certain hospital assets to LifeCare 2.0, LLC [Docket No. 528]. The sale order attached an asset purchase agreement memorializing the terms of the sale.

The following assets were sold to LifeCare 2.0, LLC for consideration of $1.3mn:

The following is a summary of classes, claims, voting rights, and expected recoveries (defined terms are as defined in the Combined Document):

In December 2012, the Debtors' predecessor LCI Holdings filed for Chapter 11 protection in the District of Delaware, lead Case No. 12-13319. Following a pre-petition marketing and sales process pre-petition, and having determined that no bid provided consideration equal to or in excess of their obligations under their pre-petition credit agreement, LCI Holdings effectuated a sale of substantially all of its assets to the current Debtors.

The Murray Declaration states, "While the Debtors have established a market leadership position in post-acute care, internal and external factors have lead the Debtors to an unmanageable level of debt service obligations and an untenable liquidity position.

In 2015, Medicare’s establishment of patient criteria to qualify as an LTAC-compliant patient facility led to significant reimbursement rate declines over the course of 2015 and 2016 as changes were implemented. Average reimbursement rates for site neutral patients, representing approximately 57% of 2016 cases, is estimated to drop from $23,000 to $9,000 across the portfolio. When rates declined sharply, the Debtors were unable to adjust.

Further, the number of patients that now qualify by Medicare to have services provided in an LTAC setting has declined substantially, resulting in a significant oversupply of LTAC beds in the market.

In an effort to address decreasing Medicare rates and declining eligible patient volumes, the Company focused on four primary areas.

In addition to developing these areas of focus, in August 2018, the Company raised additional liquidity and completed an amend and extend transaction described in paragraphs 14-21 to provide runway to execute on their business plan, including the continued acquisition and expansion of home health businesses (the 'August 2018 Transaction'). During the course of pursuing the August 2018 refinancing, the Company’s combined operations were generally performing in line with their business plan, although certain of the Company’s home health agency acquisitions were experiencing unfavorable results. Through September 2018, these unfavorable home health agency results were generally offset by favorable hospital results. In the fourth quarter of 2018, the Debtors’ hospitals also began to experience unfavorable operating results against plan. These unfavorable results coupled with the unfavorable home health operations against plan resulted in the Company being unable to perform in line with their 2018 business plan. Due to the anticipated 2018 business plan shortfall, the Debtors concluded that they would be unable to meet the debt level covenant levels required by the August 2018 Transaction during 2019." 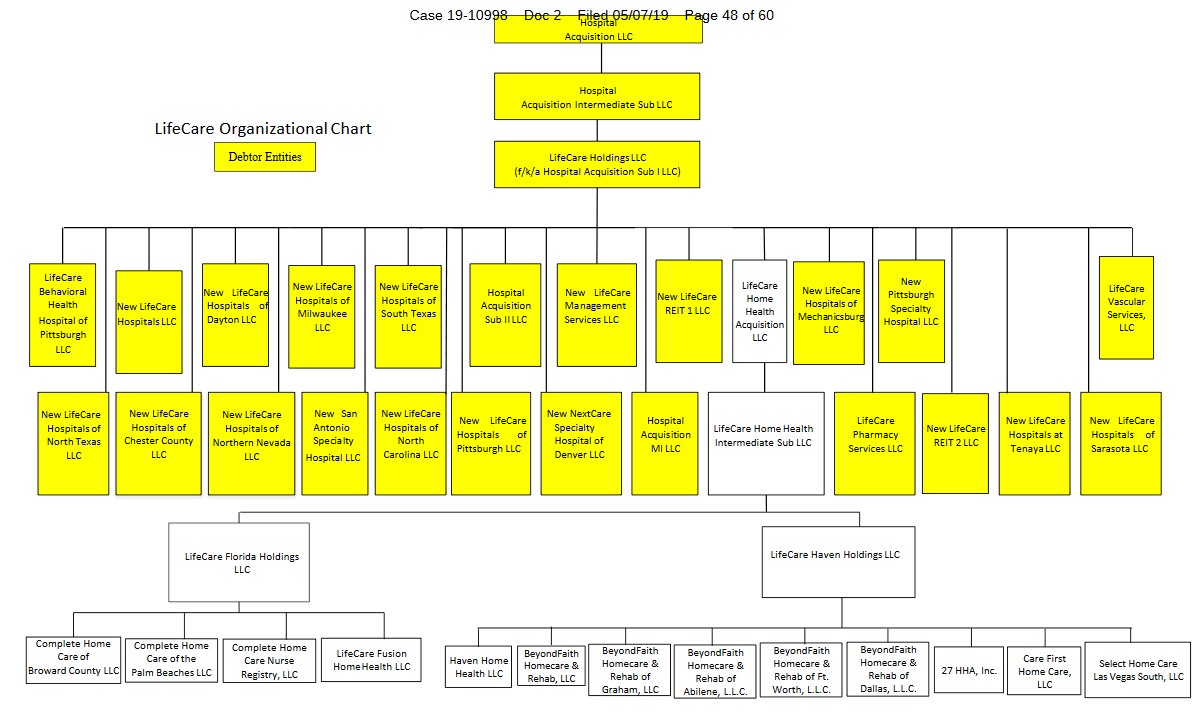 About the Pre-Petition Debtors

The Debtors described themselves as follows: "The Debtors are a leading operator of long-term acute care hospitals (“LTAC”) in the United States. In addition to the LTAC facilities, certain non-debtor affiliates own and operate home health care agencies (“Home Healthcare”) with locations in Texas, Florida and Nevada. The Home Healthcare agencies and the Debtors’ hospital facilities are operated completely independent of each other and the Debtors do not currently anticipate that the Home Healthcare facilities will seek chapter 11 protection. Through its operating subsidiaries, the Debtors provide a full range of clinical hospitalization. Substantially all of the Debtors’ revenue derives from the provision of patient services and is received through Medicare and Medicaid reimbursement and payments from private payors."