On December 18, 2019, High Ridge Brands Co. and eight affiliated debtors (“High Ridge Brands” or the “Debtors”) filed for Chapter 11 protection with the U.S. Bankruptcy Court in the District of Delaware, lead case number 19-12689. At filing, the Debtors, one of the largest independent branded personal care companies (holding rights, inter alia to Zest and Dr Fresh products), noted estimated assets between $100.0mn and $500.0mn and estimated liabilities between $500.0mn and $1.0bn. The Debtors’ subsequently filed Schedule A/B [Docket No. 183] and noted $unknown assets, and liabilities of $275.1mn.

The key element of the Debtors' Chapter 11 cases was an auction/sale process (see further below) that culminated at the end of February 2020 with a pair of assets sales generating $120.5mn of cash for the Debtors' estates.

The Memorandum in support of Plan confirmation [Docket No. 606] provides: “The combined Disclosure Statement and Plan provides for the Non-Liquidating Trust Debtor Assets to be liquidated by the Plan Administrator, and for the Liquidating Trust Debtor Assets to be transferred to the Liquidating Trust, and the proceeds of each set of assets to be distributed to Holders of Allowed Claims in accordance with the terms of the Plan and the treatment of Allowed Claims as described more fully therein. The Plan Administrator generally will be responsible for administering First Tier Claims, which are to be satisfied from Debtors’ Cash, for making distributions to Holders of Allowed Class 3 Claims and for distributing certain funds to the Liquidating Trust, and for the wind-down of the Debtors’ estates. The Liquidating Trustee generally will be responsible for administering Class 4 and Class 5 Claims, including making distributions to Holders of Allowed Class 4 and Class 5 Claims. The Debtors will be dissolved as soon as practicable after the Effective Date. The Combined Disclosure Statement and Plan divides the holders of Claims and Interests into seven (7) Classes, and sets forth the treatment to be provided to each Class. The Classes take into account the differing nature and priority under the Bankruptcy Code of the various Claims and Interests. In particular, the Combined Disclosure Statement and Plan segregates various Claims and Interests in the Debtors into the following groups: Class 1 (Priority Non-Tax Claims); Class 2 (Other Secured Claims); Class 3 (Prepetition First Lien Claims); Class 4 (General Unsecured Claims); Class 5 (Unsecured Notes Claims); Class 6 (Intercompany Claims); and Class 7 (Interests).”

On October 2, 2020, the Debtors’ claims agent notified the Court of the Plan voting results [Docket No. 613], which were as follows:

On March 2, 2020, the Court hearing the High Ridge Brands Co. cases issued a pair of orders authorizing the sale of (i) the Debtors' Oral Business Segment to an affiliate of Perrigo Company plc ($113.0mn cash consideration) and (ii) the Debtors' Hair and Skin Care Segment to an affiliate of Tengram Capital Partners, L.P. (aggregate consideration valued at $7.5mn) [Docket Nos. 291 and 294, respectively].

On February 24th, the Debtors notified the Court that they had designated successful bidders in respect of each segment [Docket No. 247].

In a February 24th press release, the Debtors stated that: "following a comprehensive sales process and a competitive auction (conducted under Section 363 of the U.S. Bankruptcy Code), an affiliate of Perrigo Company plc (‘Perrigo’) will acquire the Company’s oral care business and an affiliate of Tengram Capital Partners (‘Tengram Capital’) will acquire the Company’s hair care and skin cleansing business. The consideration includes a cash payment to High Ridge Brands of $120.5 million, and the assumption by the buyers of working capital and substantially all go-forward liabilities of the businesses, as well as certain cure costs associated with the Company’s existing business arrangements.

The Committee has negotiated two Committee Settlements with the Debtors, the DIP Agent and the Prepetition First Lien Agent, each of which provides value for the benefit of general unsecured creditors under the Plan.

First, the Critical Vendor Carve-Out Agreement provides $700,000 in cash set aside for the benefit of general unsecured creditors and carved out from the collateral securing the Prepetition First Lien Claims, pursuant to the terms of the final order approving the Critical Vendor Motion [D.I. 139] (the “GUC Carve-Out”).

Second, the Committee Settlement Annex Agreement provides, among other things, that nonpriority general unsecured creditors of the Debtors (not including any deficiency claims of the Prepetition First Lien Lenders) shall receive the benefit of (i) a guaranteed amount of $3,000,000 in cash (the “Guaranteed Amount”), (ii) 3.25% of the net proceeds10from the sale of the Debtors’ assets (the “Additional Percentage”), and (iii) the right to net proceeds of Retained Estate Causes of Action.

In a declaration in support of the Chapter 11 filing (the “Jones Declaration”) [Docket No. 2], M. Benjamin Jones, the Debtors’ Chief Restructuring Officer, detailed the events leading to Debtors’ Chapter 11 filing. In brief, the Debtors have been caught out by a liquidity crisis as they attempted to pivot from their historical “low-cost, volume-based”  strategy, which was proving unsustainable as to their hair and skin products given “momentous shifts” in consumer demographics (those shifts apparently not hitting teeth products) to a  more “accretive” strategy based on an “innovative,” “diversified” portfolio of products. That shift, however, required a higher marketing spend during a period of lower revenues; a liquidity gap exacerbated by a significant lag time between that marketing spend/efforts and getting their products onto retail shelves. All of this apparently a surprise to the Debtors who ultimately blame their slip into bankruptcy on a bar of soap; a longtime supplier of bar soap hiking prices and otherwise failing to deliver required stock and leaving the Debtors sliding into bankruptcy without the arm of lenders, whose forbearance agreements expired on December 18th (i.e. the Petition date), to steady them.

The Jones Declaration states: “The personal care industry is highly competitive and, like many other retail industries, undergoing momentous shifts as a result of changing demographics and consumer tastes. The Debtors’ oral business remains stable, but the portfolio of legacy brands of hair and skin…are concentrated in market segments and price points that have been declining.

In addition, they are concentrated in opening price points, i.e., the least costly line of a particular item, and a large portion of the Debtors’ distribution of their legacy hair and skin products comes from Dollar Stores, both of which make it difficult to pass along inflationary input costs to consumers. Because the Debtors’ strategy had originally been a low-cost, volume-based structure with similarly low, and now shrinking, margins, this market shift forced the Debtors to pivot.

In 2018, the Debtors accordingly chose to diversify their portfolio through innovation launches in growing segments within the hair and skin categories at significantly accretive gross margins…the work the Debtors did to pivot to this strategy in 2018… would not bear fruit until 2019 when these products replace others on retailers’ shelves.

The Debtors’ new strategy shifted the company’s mission to ‘creating extraordinary experiences for savvy consumers’ fuelled by transformative, on-trend innovation that creates value for both consumers and customers.

While the Debtors were working to pivot their strategy to drive profitable growth through innovation in 2018, the risks of the previous strategy, which included exclusive contracts with key manufacturers to lock in low costs, became a negative reality. In particular, the Debtors’ exclusive bar soap manufacturer, which had not been able to produce sufficient capacity to fulfil orders for some months, increased the Debtors’ price by 60% at the end of its contract term. Since the relationship was exclusive, the Debtors did not have a readily available alternate supply and were forced to pay the higher costs while they sourced and qualified new suppliers, which took 9 months…The Debtors’ ability to deliver bar soap orders to its customers on time and in full fell from 96% in April 2018, to 69% by December 2018, to 54% by March 2019.Further, this liquidity constraint came at a time when the Debtors needed that liquidity to support their innovation products with marketing investments.

The result of this has ultimately been that the Debtors’ efforts to pivot to a more diversified portfolio with an innovation focus has continued to be hindered by the Debtors’ liquidity profile.

From the fourth quarter of 2018 to the first quarter of 2019, the Debtors’ liquidity declined by approximately $20 million. This decline resulted from more than $16 million of cash interest and amortization on account of the Debtors’ secured and unsecured debt and working capital outflow of close to $6 million, which resulted primarily from the Debtors carrying higher inventory balances.”

The Jones Declaration then details a series of waivers and forbearance periods beginning in the Spring of 2019 negotiated with senior lenders and bondholders who otherwise had the ability to declare the Debtors in default of their bank and bond debt. Negotiations with these stakeholders also included plans to have these groups lead an out-of-court restructuring effort, but ultimately these discussions failed to win the necessary support of those key stakeholders. Although the Jones Declaration does not state as much, the patience of senior lenders and bondholders seems to have worn thin, with forbearance agreements agreed in respect of bank and bond debt expiring on December 18th, the date of their filing.

On September 22, 2020, the Debtors filed a Plan Supplement [Docket No. 583] wich attached the following document:

The Combined Document [Docket No. 536] attached the following: 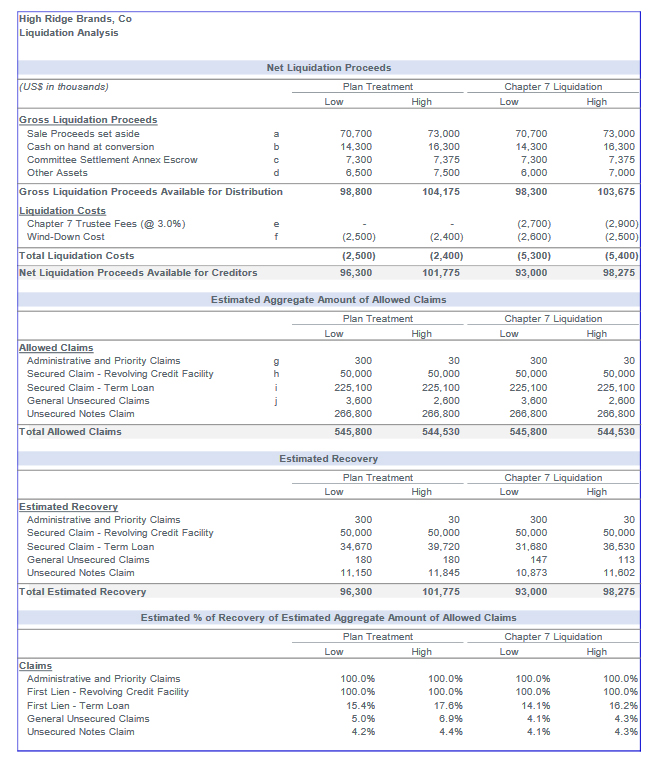 High Ridge Brands, headquartered in Stamford, Connecticut, is one of the largest independent branded personal care companies in the United States by unit volume, with a mission to craft extraordinary experiences for savvy consumers. Today, High Ridge Brands has a portfolio of over thirteen trusted brands, serving primarily North American skin cleansing, hair care and oral care markets, including Zest®, Alberto VO5®, REACH®, Firefly®, Dr. Fresh®, Coast®, White Rain®, LA Looks®, Zero Frizz®, Rave®, Salon Grafix®, Binaca® and Thicker Fuller Hair®. In addition, the Company has relationships with leading entertainment properties through which it has a portfolio of licenses such as Star Wars, Batman, Spiderman, Hello Kitty, and Transformers. The Company operates an asset-light model, outsourcing its manufacturing needs, and has approximately 140 employees. 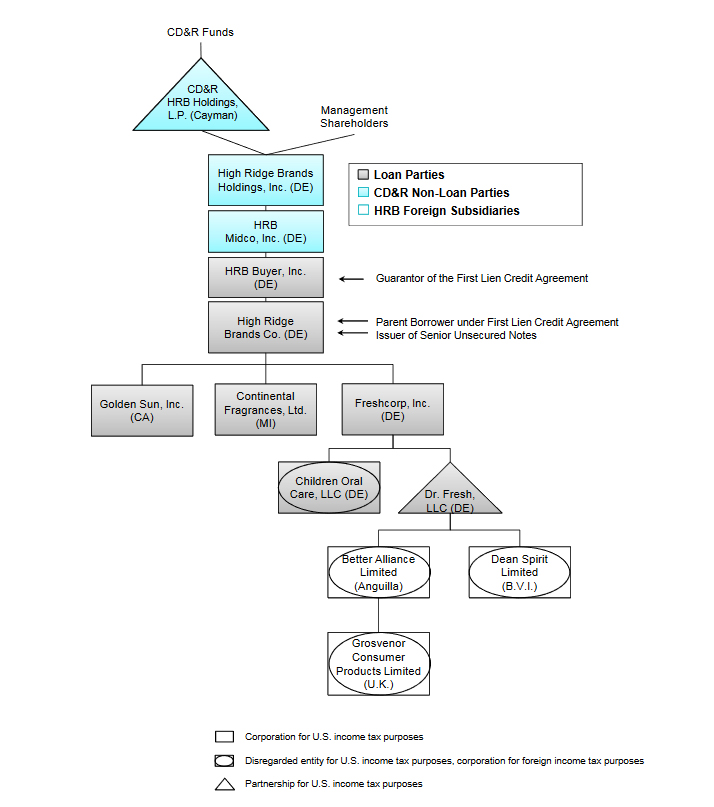