September 24, 2020 – Impresa Holdings Acquisition Corporation and three affiliated Debtors (“Impresa” or the “Debtors”) filed for Chapter 11 protection with the U.S. Bankruptcy Court in the District of Delaware, lead case number 20-12399. The Debtors, a Gardena, California-based producer of machined parts and fabricated components for the aerospace industry, are represented by Matthew B. Harvey of Morris, Nichols, Arsht & Tunnel LLP. Further board-authorized engagements include (i) Duff & Phelps Securities, LLC  as investment banker and (ii) Stretto as claims agent.

The Loye Declaration (defined below) provides: "…the Debtors have determined that pursuing a going concern section 363 sale in chapter 11 represents the best path forward to preserve and maximize value for the benefit of their stakeholders.

The Debtors have entered into a stalking horse asset purchase agreement with Twin Haven further to which Twin Haven will credit bid $10.0mn of senior debt. The Debtors and Twin Haven have agreed to forego bidder protections and anticipate concluding the sale process by year's end.

The Loye Declaration continues: …. the Debtors and the Debtors’ investment banker, Duff & Phelps, have prepared a teaser and confidential information memorandum, and will be immediately launching a fulsome postpetition marketing process. The Debtors have concurrently filed a motion seeking the approval of sale and bid procedures to facilitate the Debtors’ sale efforts (the 'Bid Procedures Motion').

Additionally, through arm’s-length negotiations conducted by their independent restructuring committee and advisors, the Debtors have negotiated with Twin Haven to serve as stalking horse bidder with a credit bid of $10 million. Importantly, the terms of Twin Haven’s stalking horse bid do not require the Debtors to pay any break-up fee, expense reimbursement, or other forms of bid protections. The Debtors believe that this important concession from Twin Haven will help foster increased interest in the Debtors’ business and aid the Debtors in maximizing value.

In addition to securing a favorable stalking horse bid, the Debtors also have secured funding for these cases through the consensual use of Twin Haven’s cash collateral, the terms of which were negotiated at arm’s length by the independent restructuring committee and the Debtors’ advisors opposite Twin Haven and its advisors. The Debtors believe that access to cash collateral pursuant to an agreed upon budget is sufficient to fund these cases through a sale process…the Debtors anticipate closing a going concern sale by December 18, 2020."

In a declaration in support of the Chapter 11 filing (the “Loye Declaration”), Steven F. Loye, the Debtors’ Chief Executive Officer, detailed the events leading to Impresa’s Chapter 11 filing. The Loye Declaration provides: “Though the Debtors believe they have a fundamentally sound business and a strong, established customer base, two significant recent events have created a 'perfect storm' for the Debtors’ business and necessitated filing these cases: (1) the grounding and suspension of production of the Boeing 737 MAX; and (2) the COVID-19 pandemic and its effect on the commercial aerospace industry.

According to the Debtors: "For more than 50 years, Impresa has provided end-to-end solutions for the Aerospace Industry. Capabilities range from traditional machine shop services like Sheet Metal Fabrication, Precision Machining, and Extrusions to advanced fabrication methods such as Hydroform and Titanium Hot Brake form. Innovative 'Lean Cellular' manufacturing gives Impresa the flexibility to support everything from one-off prototypes to large volume production."

The Loye Declaration adds: "The Debtors are a premier supplier in the commercial and military aerospace industries. The Debtors began their existence in Southern California in 1973, under the name Venture Aircraft. In April 2012, Venture Aircraft acquired the assets of Swift-Cor Aerospace, which served the same industry for over 50 years. In connection with that acquisition, Venture Aircraft changed its name to Impresa Aerospace.

Since 2012, the Debtors have continuously evolved their production capacity to provide end-to-end solutions for their customers. Operating out of their facility in Gardena, California, the Debtors manufacture a wide variety of metallic products, including machined parts, fabricated components, assembled parts and tooling for the commercial aerospace and defense markets. In conjunction with producing parts, the Debtors offer a variety of manufacturing services from sheet metal fabrication, precision machining, and aluminum extrusion to more-advanced services such as hydroforming and titanium hot brake forming. The scope of the Debtors’ services allows the Debtors the flexibility to support a broad range of customers and customer applications, and tailor the parts to each customers’ request, including production of parts for a Low Rate Initial Production (LRIP) or a full production volume.

The Debtors service virtually all the key companies within the aerospace industry, including Boeing, Spirit AeroSystems, Collins Aerospace (a unit of Raytheon), Northrup Grumman, Cessna, Lockheed Martin, and Gulfstream. Notable commercial programs include the Boeing 787, 777, 747 and 737, Airbus A380, and Gulfstream G550 and G650. The Debtors’ largest customer is Boeing. Impresa maintains strong contractual positions with Boeing and provides essential product for Boeing’s full range of commercial airliners. Impresa also contracts with several other blue-chip aerospace companies including those mentioned above. The Debtors’ strong contractual relationships with these key companies enabled the Debtors to profitably grow revenue from $32 million in 2016 to $43 million in 2019." 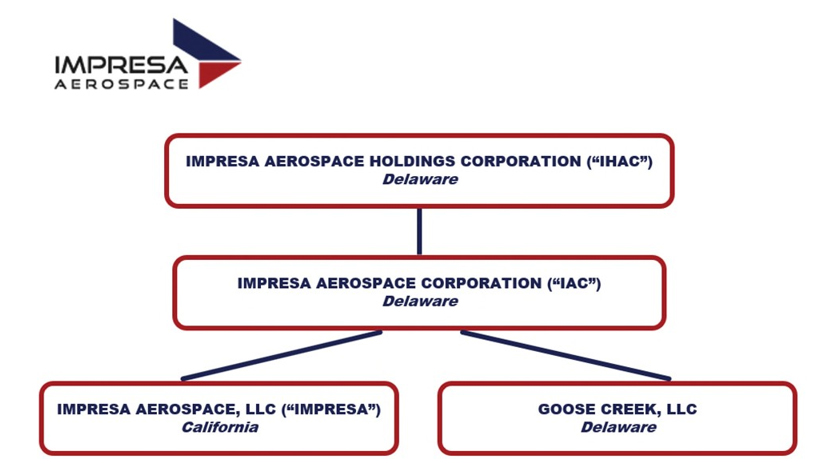