August 30, 2021 – Further to their August 24th announcement that they had reached agreement with key stakeholders as to a comprehensive restructuring (and entered into an amended Plan Support Agreement), the Debtors have now requested Court authority to (i) enter into a $1.5bn replacement debtor-in-possession (“DIP”) financing facility (the "Replacement DIP Facility"); the proceeds of which will be used to repay in full their existing (and now fully drawn) $1.0bn DIP facility (the "Existing DIP Facility") and leave them with $500.0mn in additional liquidity "to continue clearing the C-band spectrum in accordance with the timeline set forth in the FCC Order" [Docket No. 2761]. The Replacement DIP Facility is comprised of (a) a $1.25.0bn senior secured superpriority term loan facility which will be available upon issuance of the Court's DIP order and (b) a $250.0mn superpriority delayed draw term loan which the Debtors can access with three days' notice any time after the DIP order is issued.

As compared to the Existing DIP Facility, the Replacement DIP Facility contains a few material differences:

The motion explains, “As of the filing of this Motion, the DIP Debtors have drawn the entire $1 billion available under their Existing DIP Facility. The DIP Debtors seek authorization to borrow up to $1.5 billion under the DIP Credit Agreement, consisting of (a) a senior secured superpriority term loan facility in an aggregate principal amount of $1.25 billion (the “Closing Date Term Loan Commitment”), and (b) a superpriority delayed draw term loan in an aggregate principal amount of up to $250 million (the “Delayed Draw Term Loan Commitment” and, together with the Closing Date Term Loan Commitment, the “DIP Commitments”). The Closing Date Term Loan Commitment will be available to the Debtors upon closing in a single draw (such date of the initial funding, the “Closing Date”) concurrently with entry of the Order and the Delayed Draw Term Loan Commitment will be available in a subsequent draw at the election of the Debtors after entry of the Order upon 3 business days’ prior notice. The refinancing of the Existing DIP Facility and access to the incremental capital will ensure that the Debtors remain adequately capitalized during these chapter 11 cases as they begin the solicitation on the Amended Plan. These funds will also allow the Debtors to continue their critical work toward clearing the C-band spectrum by the accelerated deadlines set by the FCC Order in light of the delay in the FCC’s reimbursement of the reasonable costs and expenses of clearing the C-band spectrum

Following months of extensive negotiations and mediation, the Debtors have executed the Amended PSA that is supported by holders of approximately $11 billion in claims, representing nearly 75% of the Debtors’ outstanding prepetition indebtedness across their capital structure, and filed the Amended Plan. The execution of the Amended PSA and filing of the Plan with the support of the vast majority of the Debtors’ key creditor constituents is a pivotal moment in these cases and lays the groundwork for a comprehensive restructuring that would reduce the Debtor’s funded debt obligations by approximately $8 billion and position the Company for long term success. Simultaneously, the Debtors have completed much of the work required to clear the C-band spectrum and receive the first of the two accelerated relocation payments provided for under the FCC Order, amounting to approximately $1.2 billion. In spite of these significant achievements, however, the FCC-directed reimbursement process for the costs and expenses of clearing the C-band spectrum has not proceeded on the expected timeline. The Debtors therefore require incremental liquidity in the lead up to confirmation.

To capitalize on the momentum generated by the Amended PSA and Amended Plan, and to adjust for these changed circumstances, the Debtors engaged with their existing DIP lenders to access additional capital to provide the Debtors with liquidity and flexibility to continue clearing the C-band spectrum in accordance with the timeline set forth in the FCC Order and for the benefit of the Debtors’ stakeholders. The Debtors’ continued operational achievements in clearing the C-band spectrum ahead of the aggressive deadlines in the FCC Order led to a swift capital raise and another endorsement by the Debtors’ creditors of the Company’s long-term value. The Debtors used the consensus reached on the Amended PSA to engage in discussions with the ad hoc group of certain creditors represented by Akin Gump Strauss Hauer & Feld LLP and advised by Centerview Partners LLC (the ‘Jackson Ad Hoc Group’), and the ad hoc group of certain creditors represented by Jones Day and advised by Houlihan Lokey Capital, Inc. (the ‘Jackson Crossover Ad Hoc Group,’ and together with the Jackson Ad Hoc Group, the ‘DIP Lenders’) regarding the terms of an incremental debtor-in-possession financing facility.

… The refinancing of the Existing DIP Facility and access to the incremental capital will ensure that the Debtors remain adequately capitalized during these chapter 11 cases as they begin the solicitation on the Amended Plan. These funds will also allow the Debtors to continue their critical work toward clearing the C-band spectrum by the accelerated deadlines set by the FCC Order in light of the delay in the FCC’s reimbursement of the reasonable costs and expenses of clearing the C-band spectrum.”

On August 24th, the Debtors filed an Amended Chapter 11 Plan and a related Disclosure Statement, with each attaching redlines showing changes from the version filed on February 12, 2021 [Docket Nos. 2692 and 2693, respectively].

In a press release (see also also 8-K on PSA and which attaches cleansing materials) announcing the filing of the Plan, the Debtors stated, “Intelsat S.A…today announced that it has obtained the support of key creditor constituencies on the terms of a comprehensive financial restructuring that would reduce the Company’s debt by more than half – from nearly $15 billion to $7 billion – and position the Company for long-term success….

The Plan, which has been the subject of extensive negotiations with the Company’s creditors and resolves a multitude of complex issues among them, has the support of holders of approximately $3.8 billion of the Company’s funded debt. These supporting creditors have executed a Plan Support Agreement that binds their support for the Company’s Plan.

The Company is seeking Court approval of the Disclosure Statement and to establish procedures to solicit votes on the Amended Plan at a hearing scheduled for September 1, 2021.

Today’s filings and the widespread consensus in support of the Amended Plan help to achieve completion of the financial restructuring process and the Company’s emergence from Chapter 11 by the end of 2021. The Amended Plan provides that Intelsat will emerge as a private company, with the support of new equity owners, to best advance its strategic objectives and accelerate its growth trajectory, with a path to becoming publicly traded again at some point in the next five years.”

The PSA commits the Debtors to have obtained Plan confirmation and then Plan effectiveness within 120 and 180 days of August 24, 2021, respectively.

The Amended Disclosure Statement [Docket No. 2693] providess, “The Amended Plan provides for the reorganization of the Debtors as a going concern with a deleveraged capital structure and sufficient liquidity to fund the Debtors’ post-emergence Business Plan and continue clearing activities to enable the Debtors to be eligible for the Accelerated Relocation Payments.

Specifically, the Amended Plan provides the Debtors with a New Capital Structure consisting of $7.125 billion in New Debt, which may include New Term Loans and New Notes that may be fully backstopped by the Backstop Parties.

The Amended Plan Support Agreement attached hereto as Exhibit G also includes agreement on a standstill on the prosecution of such Guarantee Claims by and among each of the Parent Guarantors (as defined herein), the Jackson Crossover Ad Hoc Group, and the HoldCo Creditor Ad Hoc Group.

The Tolley Declaration provides: “The Debtors have commenced these cases to efficiently access capital and engage with stakeholders through a chapter 11 process. The Debtors require this capital to meet two unexpected, external challenges that have recently arisen. Specifically, the Debtors require sufficient capital to (a) comply with the FCC’s February 28, 2020 order to “clear” operations from the 3700–4000 MHz radio frequency spectrum and obtain up to $4.87 billion in Accelerated Relocation Payments, and (b) address the significant reduction in revenue and cash flow associated with the ongoing COVID-19 pandemic. 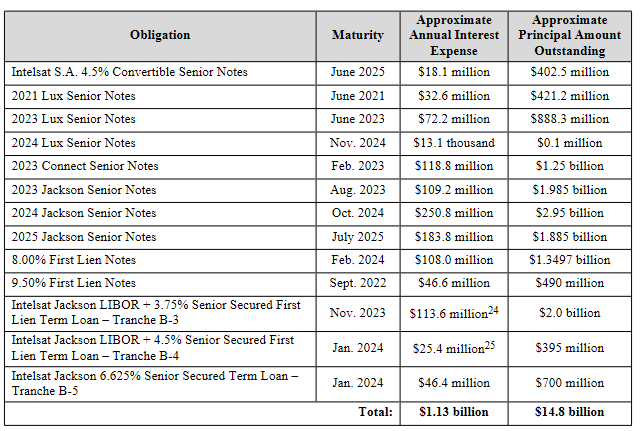 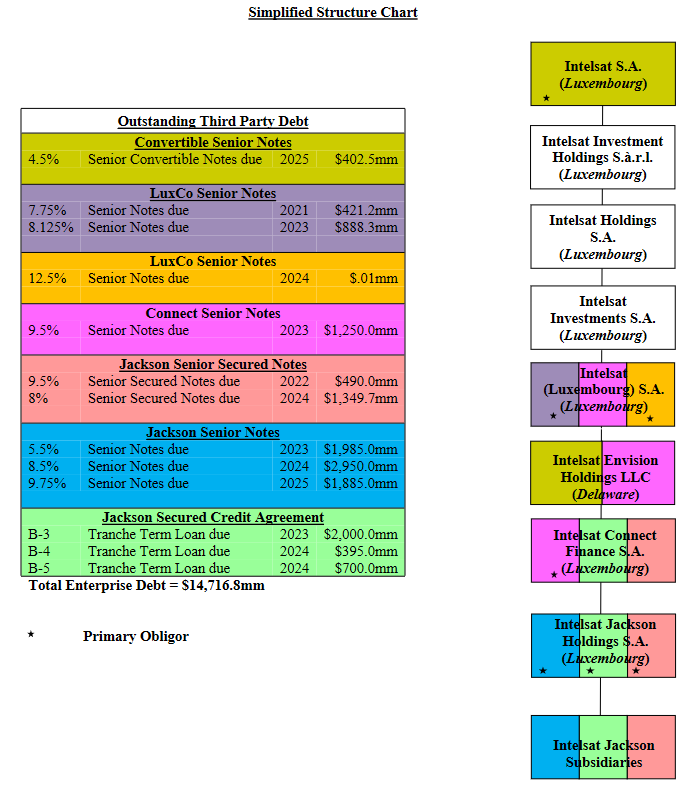