During the COVID-19 pandemic, the Debtors originated @$7.0bn in PPP loans "making it the second largest PPP lender in the nation by application volume."  In August 2020, much of the Company's business was sold to American Express Travel Related Services Company, Inc. (price: $750.0mn) and thereafter the Debtors operated in a limited capacity as (i) a servicer and subservicer of PPP Loans ($1.3bn still being serviced by Debtors as at Petition date), (ii) a software services provider for lenders of PPP Loans, and (iii) a servicer of a minor portfolio of non-PPP small business loans.

In a press release announcing the filing, the Debtors provide: "KServicing has determined that a Chapter 11 restructuring proceeding provides the Company with beneficial flexibility and protections to consummate the winding down of its operations in an efficient and effective manner and will also provide a framework for resolution with key stakeholders and a possible global settlement of outstanding disputes."

The Debtors’ CEO Laquisha Milner commented further: “The actions we take today are in line with KServicing's mission to support PPP borrowers through their loan forgiveness process, provide loan processing services to partner banks, and wind down the Company's existing loan portfolio…"

UPDATE: On October 31, 2022, the Debtors requested Court approval of: (i) the adequacy of the Disclosure Statement, (ii) plan solicitation and voting procedures and (iii) a proposed timetable culminating in a January 5, 2023 Plan confirmation hearing [Docket No. 176].

A hearing to consider the Disclosure Statement is scheduled for November 21, 2022, with objections due by November 14, 2022.

The Disclosure Statement [Docket No. 63] attached the following exhibits.

In a declaration in support of first day filings (the “Rieger-Paganis Declaration"), Deborah Rieger-Paganis of AlixPartners details the "operational hurdles in processing the balance of its Loan Portfolio," before addressing an avalanche of "hindsight" investigations as to the Debtors' management of their PPP program. The Debtors vigorously dispute allegations of mismanagement now being raised in those investigations and squarely point the finger at the SBA for what is now a complicated post-crisis clean-up of a hastily rolled out PPP program characterized by "a distinct lack of clarity and guidance from the SBA" and which had a strong focus on speed and which was willing to see review standards loosened ("participating lenders were directed to forego the typical underwriting process, in favor of 'minimal review'.")

Ms. Rieger-Paganis goes pretty far out on a limb in defense of her client, positing that: "Despite adherence to express SBA guidance, the Company is embroiled in government investigations, litigations, and stakeholder disputes related to the PPP program. The hindsight investigations and misdirected scrutiny severely hamper the Company’s ability to accomplish its mission of servicing the balance of the PPP Loans in its Loan Portfolio and have caused significant additional costs to winding down its business."

The Rieger-Paganis Declaration provides: "In addition to the operational hurdles in processing the balance of its Loan Portfolio, the Company is currently embroiled in a number of discussions and disputes related to its participation in the PPP—nearly all of which are vigorously disputed by the Company—including, but not limited to: (a) investigations by the Department of Justice offices in the District of Massachusetts (the ‘MA DOJ’) and the Eastern District of Texas (the ‘Texas DOJ’ and together with the MA DOJ, the ‘DOJ’), the United States House of Representatives Select Subcommittee on the Coronavirus Crisis (the ‘Congressional Subcommittee’), and the Federal Trade Commission (the ‘FTC’) into the Company’s PPP Loan program; (b) allegations by the SBA that the Company should be held liable for any loan amounts paid to borrowers that were in excess of what they were statutorily entitled to receive and that the SBA’s Guaranty Purchase obligation would not apply to certain PPP Loans and/or excess loan amounts;6 (c) a dispute between the Company and Customers Bank (‘CUBI’), one of the two lenders the Company services PPP Loans on behalf of, in connection with the Company’s demand for CUBI to remit approximately $65 million in loan referral and servicing fees contractually owed to the Company before the Company commenced providing services and which remains unpaid, and CUBI’s allegations that the Company – despite not being paid the funds to perform its service obligations – failed to service CUBI’s PPP Loans in adherence to certain PPP guidelines; (d) allegations by Cross River Bank (‘CRB’ and, together with CUBI the ‘Partner Banks’), the other lender the Company services PPP Loans on behalf of, that the Company did not adhere to certain PPP guidelines; (e) allegations by the Partner Banks that loan numbers the SBA produced but later deleted or re-assigned without knowledge of the Company are liabilities of the Company; (f) a class action lawsuit filed by certain PPP borrowers alleging that the Company did not properly process Loan Forgiveness applications; and (g) AmEx’s refusal to honor its obligations under a Transition Services Agreement (the ‘AmEx TSA’) between the Company and AmEx entered into in connection with the AmEx Transaction, which has affected the Company’s ability to perform a number operational functions (collectively, the ‘Disputes).

Despite adherence to express SBA guidance, the Company is embroiled in government investigations, litigations, and stakeholder disputes related to the PPP program. The hindsight investigations and misdirected scrutiny severely hamper the Company’s ability to accomplish its mission of servicing the balance of the PPP Loans in its Loan Portfolio and have caused significant additional costs to winding down its business. The overall impact of the Disputes on the Company’s operations is compounded by the Company’s limited go-forward cash flows, inability to originate any new loans due to non-compete covenants contained in documentation associated with the AmEx Transaction, inability to obtain certain accommodations needed to address the expiration of applicable Loan Forgiveness and Guaranty Purchase application deadlines that can only be granted by the SBA,  and a substantially new workforce in place following the AmEx Transaction that has limited firsthand knowledge of the Company’s legacy operations."

Continuing as to the SBA, Ms  Rieger-Paganis adds: "Speed was the watchword of the PPP. Delays in processing and funding loans would undermine the efficacy of the 'stay at home' posture that public health authorities believed was the most effective means of slowing the spread of a disease that threatened millions
of lives. To induce lenders to make hundreds of billions of dollars in unsecured loans to small and mid-size businesses (many of which had ceased operating due to government mandates), the CARES Act provided that all PPP Loans would be backed by a 100% SBA guaranty of repayment, and participating lenders were directed to forego the typical underwriting process, in favor of 'minimal review' of PPP Borrower calculations in which lenders (per published SBA guidance)
were permitted to rely on PPP Borrower representations, including specific representations as to 'amounts required to be excluded' from PPP Borrower calculations of qualifying payroll costs.

However, there was a distinct lack of clarity and guidance from the SBA during the PPP’s initial rollout. New rules and guidance were issued on a near daily basis during the first few months of the PPP Loan Program. In the first month of the PPP Loan Program, the government published six interim final rules and 42 FAQs. In the first two months of the program, those numbers increased to 14 interim final rules and 48 FAQs. Despite this lack of clarity, government officials publicly expressed to participating lenders that time was of the essence with regards to administering loans, at times even asking lenders to process loans to eligible PPP Borrowers on the same day that they applied. There was no other way to objectively view those facts and circumstances—it was a national emergency. Under the most difficult of circumstances, the Company processed loan applications in good faith, in accordance with the framework established by the CARES Act, SBA’s PPP implementing regulations, and the SBA’s written guidance concerning lender obligations under the PPP."

According to the Debtors: “Founded in 2010 and headquartered in Atlanta, Georgia, Legacy Kabbage (a predecessor of KServicing) was one of the leading fintech providers of working capital to small businesses for over a decade.  Legacy Kabbage began as a proprietary online lending platform for small businesses, providing loan services to over 250,000 American small businesses, many of which were businesses that struggled to receive adequate funding through traditional banking institutions.  Legacy Kabbage offered a variety of services to small business owners, including providing small business loans, access to flexible lines of credit, business checking accounts, online bill payment methods, cash flow visualization tools, and e-gift certificates through its website and software application.  From 2020-2021, the Company provided and facilitated necessary funding to small business owners through PPP loans during the COVID-19 pandemic.  The Company's existing technology infrastructure spearheaded its PPP work, which led to a total of $7 billion in loans being originated by the Company.

The origination and servicing of PPP Loans and small business loans to eligible borrowers was critical during a time of unprecedented health and economic uncertainty brought about by the COVID-19 pandemic.  On August 16, 2020, much of the Company's business was sold to American Express Travel Related Services Company, Inc. pursuant to an executed Agreement and Plan of Merger.  As a result of the merger, KServicing now operates in a limited capacity as (i) a servicer and subservicer of PPP Loans, (ii) a software services provider for lenders of PPP Loans, and (iii) a servicer of a minor portfolio of non-PPP small business loans." 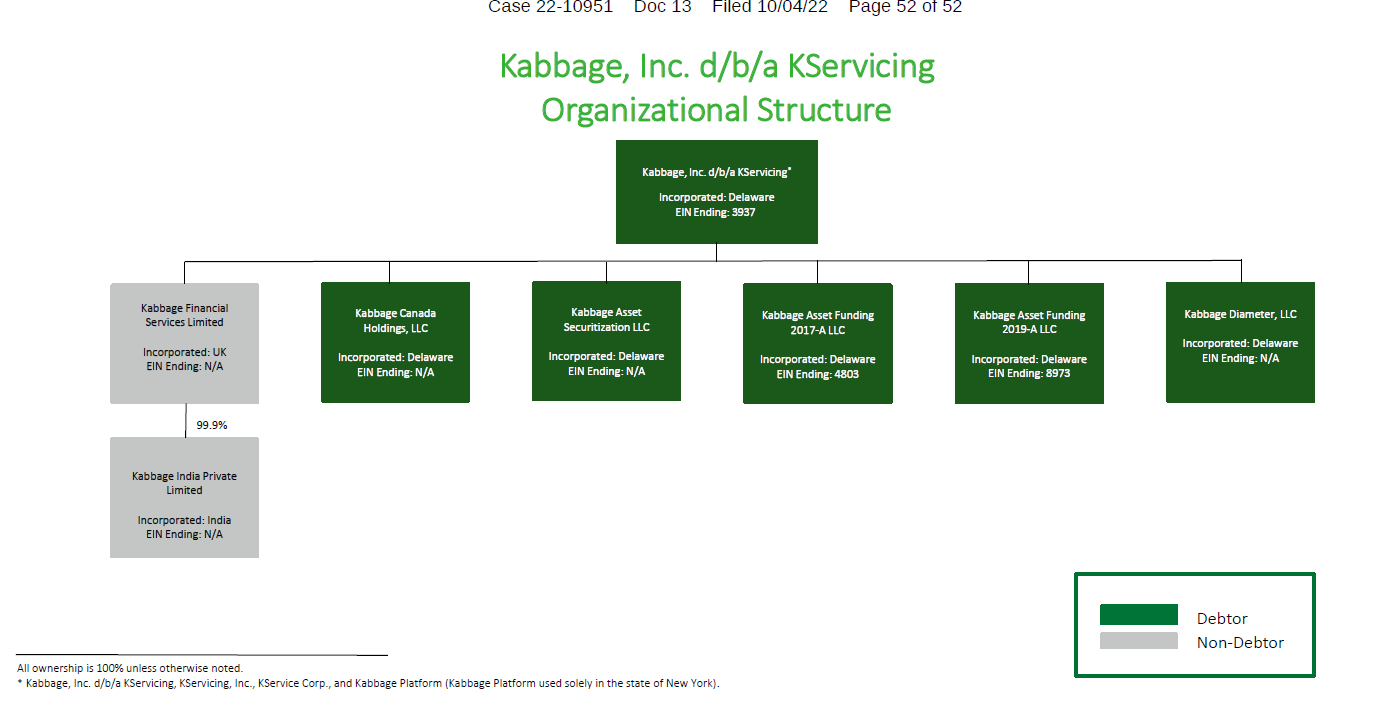 Fresh Acquisitions, LLC (Buffets) – Famous Dave and Tahoe Joe Brought Together by BBQ after Anything But Serene Culmination of Sale Process