July 11, 2021 – The Debtors have filed a motion requesting authority to amend their Senior Secured Super-Priority Debtor-in-Possession Promissory Note (the “DIP Agreement”) pursuant to the terms of an Amendment No. 1 to that agreement (the “DIP Amendment,” a copy of which is attached as Exhibit 1 to a proposed order, itself attached to the motion) [Docket No. 520]. The motion also attached a blackline of "the conformed note," ie the note as amended to reflect agreed changes.

Principal amongst changes are some considerably extended Plan milestones (eg Plan effectivess deadline extended by 45 days) and some tighter restrictions as to DIP facility drawdowns going forward (eg maximum further drawdowns, not to occur until after a final DIP order, now capped at $5.0mn and occurring at least 4 days apart). The Debtors have filed a revised budget to reflect the DIP Amendment.

On July 7, 2021, the Debtors’ Official Committee of Unsecured Creditors (“the Committee”) filed a motion seeking a one-week continuance of a scheduled July 12th final DIP hearing and a one-week extension of the Committee’s deadline to object to entry of the Final DIP Order [Docket No. 385]. The recently appointed Committee argues that it needs more time to understand the Debtors' DIP financing needs and to examine the relationship between the Debtors and their prepetition-turned-DIP lenders, Softbank. The Committee notes: "As a significant component of the DIP loan, Softbank is seeking broad general releases for any claims which may have arisen pre-petition against Softbank and affiliated officers and directors….The Committee has been allowed to participate in certain interviews, but is still gathering information and conducting its own investigation into potential claims against Softbank."

Following discussions amongst the Committee, the Debtors and the DIP lender, the parties have agreed to delay the final DIP hearing until July 19th, with the Committee also getting an extension of the period during which it can file an objection to the DIP financing until July 15th.

The Debtors' motion provides: "The DIP Amendment amends the DIP Agreement, among other things, to provide relief to the Debtors with respect to a condition subsequent to obtain certain foreign equity pledges, to modify the borrowing structure of the DIP Facility to allow for multiple draws in smaller increments, and to include additional covenants designed to maximize the sale proceeds to be realized by the Debtors’ estates and facilitate the repayment of the DIP Facility.

Second, the DIP Amendment extends the deadline for the Debtors to deliver agreed-upon pledges of equity in certain foreign subsidiaries to the DIP Lender. Absent amendment of this provision, the Debtors are not in compliance with a condition subsequent to the effectiveness of the DIP Agreement.

Third, the DIP Amendment amends the borrowing structure under the DIP Agreement by (i) reducing the maximum amount of each borrowing request from $10 million to $5 million (with greater amounts to be considered in the DIP Lender’s discretion), (ii) providing that the Debtors may borrow once within each four (4) Business Day period (or more frequently in the DIP Lender’s discretion), and (iii) including an anti-cash hoarding provision.

Fourth, the DIP Amendment adds certain covenants to the DIP Agreement (i) limiting certain non-ordinary course payments without the DIP Lender’s consent, (ii) limiting the funding of certain amounts into the account designated for professional fees while the DIP Agreement is outstanding, (iii) requiring the Debtors to deliver reporting on amounts set aside for the payment of funds the Debtors consider to be held in constructive trust for certain third parties, and (iv) requiring the Debtors to use reasonable best efforts to remove or otherwise resolve liens, claims, encumbrances and interests with respect to assets being sold in the Debtors’ sale process.

On June 9, 2021, the Court authorized the Debtors to (i) access $25.0mn (now reduced) of DIP financing on an interim basis and (ii) use cash collateral. The interim tranche of DIP financing, part of what was in total $35.0mn of requested financing, is being provided by SB Investment Advisers, an affiliate of SoftBank Vision Fund I (‘SVF’) [Docket No. 111]. The $10.0mn balance was to be made available upon issuance of final order, with that order to be considered at a July 12th hearing.

As of the petition date, prepetition lenders and equity holders (just shy of 100%) SVF and its affiliates have invested approximately $2.15bn in Katerra

The DIP motion [Docket No. 41] provides, “The Debtors filed these chapter 11 cases in the wake of a severe liquidity crisis with the goal of pursuing a value-maximizing marketing and sale process and orderly wind down of their business. Close to negative liquidity, the Debtors will suffer immediate and irreparable harm absent immediate access to capital. The postpetition financing sought herein is essential to the Debtors’ continued operations during these chapter 11 cases.

Houlihan Lokey Capital, Inc. (‘Houlihan Lokey’), the Debtors’ investment banker, embarked on a process to raise liquidity on an exigent basis, approaching several parties, including SB Investment Advisers (UK) Limited—an affiliate of SoftBank Vision Fund I (‘SVF’) and other parties familiar with the Debtors’ businesses. Houlihan Lokey solicited both in-court and out-of-court financing proposals from SVF, third party lenders, and parties who had expressed an interest in acquiring certain assets of the Debtors. Ultimately, the only party both willing and able to provide the liquidity the Debtors required on an expedited basis was SB Investment Advisors (UK) Limited, an affiliate of SVF.

To help aid the Debtors’ orderly and smooth transition into chapter 11 and help maximize recoveries for all creditors, SVF committed to provide $35 million of postpetition financing in the form of a senior secured superpriority debtor in possession promissory note (the ‘DIP Promissory Note’ and the holder of such promissory note, the ‘DIP Lender’).

The DIP Promissory Note provides the Debtors with immediate access to liquidity on favorable economic terms under the circumstances, including no up-front fees, no exit fees, no ticking fees, no premiums, no repayment or prepayment fees, no cash interest is required and, if the loan is repaid within the first sixty (60) days, all accrued interest is waived, and payment of all DIP Lenders’ advisors fees and expenses are deferred until the maturity of the DIP Promissory Note. These concessions from SVF are designed to provide the Debtors as much near-term liquidity as possible under the circumstances to avoid a chapter 7 filing and bridge the Debtors to an orderly and expeditious sale process and wind-down intended to maximize value available for creditors.”

A declaration in support of the DIP financing filed by Houlihan Lokey adds: "Upon re-engaging Houlihan Lokey in May 2021, it was determined that the Debtors were operating at a perilous level of liquidity. The impact of the Greensill insolvency and the press coverage in conjunction therewith, along with other rumors and concerns throughout the marketplace, caused a run on Katerra’s liquidity, all as more fully set forth in the First Day Declaration.

Houlihan Lokey embarked on a process to raise liquidity on an exigent basis, approaching several parties, including SVF and other parties familiar with the Debtors’ businesses. Given the very short time frame (approximately two weeks) along with the complexities of the Debtors’ businesses and underlying assets, it was impractical to approach a broad range of traditional financing sources. As a result, Houlihan Lokey embarked on a very targeted approach to solicit financing. Given its initial engagement on behalf of the Company in September 2020, Houlihan Lokey was able to immediately engage in discussions with parties who had a familiarity with the business and could potentially provide capital in a matter of weeks. Houlihan Lokey solicited both out-of-court and in-court financing proposals from SVF, third party lenders, and parties who had expressed an interest in acquiring certain assets of Katerra. Ultimately, the only party willing to provide the liquidity the Company required on an expedited basis was SVF.

Accordingly, the $35.0 million DIP Promissory Note is not only the best financing available, but also the only financing that was available as of the Petition Date."

As of the Petition date, the Debtors and certain of their non-debtor subsidiaries have an aggregate principal amount of approximately $1.29bn to $1.55bn in estimated obligations, consisting primarily of (i) prepetition funded debt of certain of the Debtors’ foreign non-Debtor subsidiaries, (ii) surety bond obligations, (iii) letters of credit, and (iv) corporate guarantees. The aggregate outstanding amount of each debt obligation is as follows: 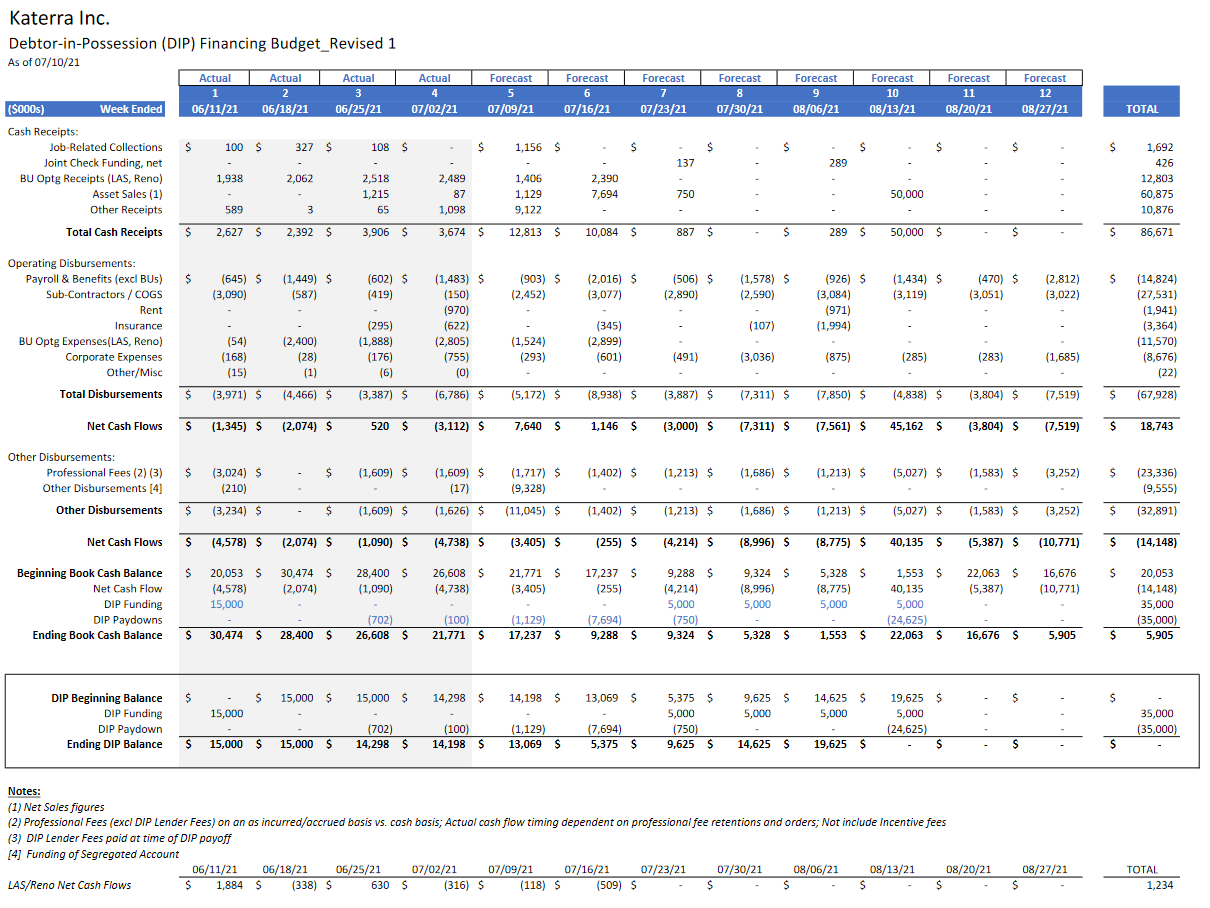 On June 6, 2021, Katerra, Inc. and 32 affiliated Debtors (“Katerra” or the “Debtors,” “a technology-driven construction company that develops, manufactures, and markets products and services in the commercial and residential construction spaces”) filed for Chapter 11 protection noting estimated assets between $500.0mn and $1.0bn; and estimated liabilities between $1.0bn and $10.0bn. In the year ending 2020, Katerra’s operations generated revenue of approximately $1.75bn. At filing, the Debtors noted that the “rapid deterioration of the company’s financial position is the result of the macroeconomic effects of the COVID-19 pandemic on the construction industry” and their intention “to conduct a marketing and sale process to maximize value for its stakeholders.”

As of the petition date, prepetition lenders and equity holders (just shy of 100%) SVF and its affiliates have invested approximately $2.15bn in Katerra

Petition date filings note: “Katerra is a technology-driven construction company that develops, manufactures, and markets products and services in the commercial and residential construction spaces. Katerra delivers a comprehensive suite of products and services for its clients through a distinct model that combines end-to-end integration with significant investment in technological and design innovation. Katerra offers services to its clients through three distinct offerings: (a) end-to-end new build; (b) construction services; and (c) renovations. Katerra has approximately 6,400 employees who are primarily located in nine countries. In the year ending 2020, Katerra’s operations generated revenue of approximately $1.75 billion.”