March 10, 2022 ­­– The Court hearing the Klausner Lumber Two case issued an order confirming the First Amended Plan of Liquidation filed by the Debtor and its Official Committee of Unsecured Creditors (the “Committee,” and together with the Debtor, the “Plan Proponents”) [Docket No. 1285].

The confirmation order comes after a two day hearing at which the Plan's last obstacle, an objection filed by Carolina Sawmills, L.P., ("Carolina Sawmills") was withdrawn further to a "CSLP Confirmation Settlement" that will see an existing adversary proceeding amongst the parties carried through to its conclusion; with a final court ruling in that proceeding then incorporated into the Plan. That proceeding will determine whether Carolina Sawmills has a lien on substantially all of the Debtor's sale proceeds, as it claims, or not; with the trustee handling the Debtor's liquidation trust then distributing the proceeds as appropriate.

Until then, Carolina Sawmills has agreed to vote its $75.0mn claim in favor of the Plan with the partied agreeing that Plan effectiveness will not come for at least 60 days after issuance of this confirmation order. The CSLP Confirmation Settlement is incorporated into the confirmation order (to which it is attached).

On June 10, 2020, Klausner Lumber Two LLC (“KL2” or the “Debtor”) filed for Chapter 11 protection with the U.S. Bankruptcy Court in the District of Delaware, lead case number 20-11518 (Judge Owens). At filing, the Debtor, a North Carolina lumber mill owned by Klausner Trading USA (ultimate parent, the German-Austrian Klausner Group), noted estimated assets between $10.0mn and $50.0mn; and estimated liabilities between $100.0mn and $500.0mn.

On December 17, 2020, the Court hearing the Klausner Lumber Two cases issued an order approving a $83.4mn cash sale of the Debtor’s assets to an affiliate of Austria’s Binderholz Group (“Binderholz”). Binderholz was also the successful bidder in respect of the Klausner Group's other U.S. sawmill, Klausner Lumber One LLC ("KL1," in Florida) which, not facing a delay like the one occassioned by the Carolina Sawmills adversary proceeding, had its own Chapter 11 Plan of Liquidation confirmed back in July of 2021.

The Debtor's memorandum of law in support of Plan confirmation (the "Memorandum," which precedes the courthouse steps CSLP Confirmation Settlement) [Docket No. 1261] provides, “The Debtor commenced this Chapter 11 Case to implement a sale process that would maximize recoveries for its creditors, preserve the opportunity for the productive use of its assets and provide a pathway for the employment of dozens of people.

During the course of the Chapter 11 Case, the Debtor engaged in extensive good-faith and arm’s-length negotiations with its key stakeholders, including the Creditors’ Committee, to exit bankruptcy as quickly and efficiently as possible after concluding an incredibly successful sale of substantially all of the Debtor’s assets. These efforts were productive and resulted in a chapter 11 plan that will provide for, among other things, (a) the deposit of the remaining Sale Proceeds into the Segregated Account, with such funds to be held by the Liquidating Trustee and distributed to Holders of Allowed Claims and Allowed Interests as provided under the Plan and the Liquidating Trust Agreement, (b) the reconciliation of claims, (c) the monetizing of any remaining assets and (d) the pursuit of certain Causes of Action, including the CS Adversary Proceeding. Utilizing the Liquidating Trust structure is the most efficient and cost-effective way to wind down the Debtor’s Estate and bring certainty and finality to the Debtor, its creditors, and the Chapter 11 Case.

As described in detail in the Court-approved Disclosure Statement, in addition to the Segregated Account, the Plan also provides for (a) the transfer of the Debtor’s remaining assets to the Liquidating Trust, including any funds in the Segregated Account available for distribution under the Liquidating Trust Agreement, (b) satisfaction of all Administrative Expense Claims, Priority Tax Claims, Professional Fee Claims, Priority Claims and the WARN Act Class Settlement Claim, (c) distributions to Holders of Allowed Claims and Allowed Interests, (d) certain release, exculpation and injunction provisions and (e) an orderly wind-down of the Estate.

The Disclosure Statement [Docket No. 1164] reads:

“The following provisions shall govern the effectuation of the Plan:

The following is a summary of classes, claims, voting rights and expected recoveries (defined terms are as defined in the Plan and/or Disclosure Statement; see liquidation analysis below):

3 The maximum amount shown assumes Carolina Sawmills is fully successful in their arguments and reflects the total estimated proceeds available for distribution after payment of the CS Carved Out Amounts; however, such amount may be lower depending on the outcome of the CS Adversary Proceeding or the ultimate value of the collateral securing any Allowed CS Secured Claims.

4 Class 2 (Priority Claims) and Class 3 (WARN Claims) are assumed to be paid out prior to any Secured or other Claims of Carolina Sawmills pursuant to the CS County Stipulation and Order.

5 The amounts shown here are based on the WARN Act Settlement, which has been approved by the Court pursuant to the Order (I) Certifying a Class for Settlement Purposes, (II) Appointing Plaintiff Cornelius Turner as Class Representative and Plaintiffs’ Counsel as Class Counsel, (III) Preliminarily Approving Settlement, (IV) Approving Class Notice, and (V) Scheduling Fairness Hearing [Docket No. 944] and Order Granting (I) Final Approval of Settlement Agreement, (II) Approving Class Counsel’s Fees and Expenses and (III) Granting Related Relief [Docket No. 986], and reflect the distribution of the Net WARN Act Class Settlement Amount.

6 This range reflects the potential outcomes that could result from the CS Adversary Proceeding and the reconciliation of the certain additional asserted Claims, including those asserted by the Klausner Group.

On February 24, 2022, the Debtor's claims agent notified the Court of the Plan voting results [Docket No. 1246], which were as follows:

The Debtor filed Plan Supplements at Docket Nos. 1221 and 1237, which attached the following:

On December 17, 2020, the Court hearing the Klausner Lumber Two cases issued an order approving (i) an asset purchase agreement (the “APA”) entered into with Binderholz Enfield LLC (the “Purchaser” or the “Successful Bidder”) in respect of an $83.4mn cash sale of the Debtor’s assets (the “Sale”) and (ii) the Sale itself [Docket No. 507]. The APA is attached to the order as Exhibit 1.

The Successful Bidder is an affiliate of Austria’s Binderholz Group (“Binderholz”).

Stalking horse MM-H, which will now receive a $600k break-up fee and up to $300k of its expenses reimbursed, had paced bidding with a $30.0mn cash offer memorialized in an early November asset purchase agreement, with that bid ultimately replaced by a $32.0mn baseline bid from Binderholz which was notified to the Court on December 7th.

This was the second time in recent months that the two Austrian timber companies had faced off over a Klausner Trading USA asset. On September 1st, further to an August 21st auction and an August 31st sale hearing, the Court hearing the Klausner Lumber One cases issued an order approving the $61.0mn sale of those assets to Binderholz with MM-H (which describes itself as “the leading supplier of glued laminated timber in Europe”) again designated as the back-up bidder.

The North Carolina site is located in one of the best growing areas for the ‘Southern Yellow Pine’ species, which is in high demand in the USA. Log availability from the local area is sufficient and sustainable. In addition, the southeast of America is one of the most populous states, so that sales in this region are correspondingly high.”

According to the Prusak Declaration, "Over the last several weeks, KL2 and its new professionals have negotiated a settlement with the County (which KL2 intends to finalize and seek Court approval of very soon). Under this settlement, the County will be repaid the amounts it is owed under the EDA upon the closing of a sale of KL2, and in return will convey, in fee, all rights to the land to a buyer. In addition, as will be set forth in the settlement agreement, the County will subordinate its interests in the former KL2 land to a post-petition lender, allowing KL2 to obtain post-petition financing.

Although, at first, we thought that these issues might be part of an adversary proceeding before this Court, which would take substantial time and funds (none of which KL2 has, or can obtain in any material amount other than through post-petition financing through consensual subordination of the County’s interests). Instead, this comprehensive settlement (which the Debtor intends to finalize and seek Court approval of very soon) allows a path forward to a sale or reorganization in this case. In addition, pending approval and funding of the Debtor’s post-petition financing, the County will continue to cover certain utilities, insurance and security expenses for the subject property and plant, post-petition (which will be reimbursed under the settlement).

The arrangements with the County are beneficial, since in between the time from when the Debtor shuttered the property and the County began to provide security, the plant was broken into twice and a number of hand tools appear to have been stolen. The agreement with the County to continue to provide security, as well as power and insurance until the anticipated settlement motion is approved by this Court and funding from a DIP lender is obtained, approved and funded, further benefits the Debtor’s estate while the parties work towards an amicable resolution of their disputes….

[I]n order to generate funds prepetition to file this case, Asgaard contacted over thirty potential purchasers of certain unencumbered equipment owned by KL2, and obtained competitive bids. As a result, KL2 sold some individual pieces of equipment prior to the Petition Date. I note that one piece of equipment was sold, pre-petition, to Capital Recovery Group, LLC… The equipment sale proceeds were used to pay some pre-petition fees and expenses, including the amounts set forth above for Asgaard (the balance being written off), a $10,000 retainer for Donlin Recano (KL2’s proposed claims agent), a $10,000 retainer to new Delaware counsel to Carolina Sawmills, as pre-petition lender, $29,500 paid to Hilco for an appraisal of the property, plant and equipment to support the KL2 post-petition financing process and $1,717 to the Morris Nichols law firm for the Chapter 11 filing fee of KL2. The balance will be used as the initial funding of the estate until DIP financing can be obtained."

Liquidation Analysis (See Exhibit B to Disclosure Statement [Docket No. 1164]) 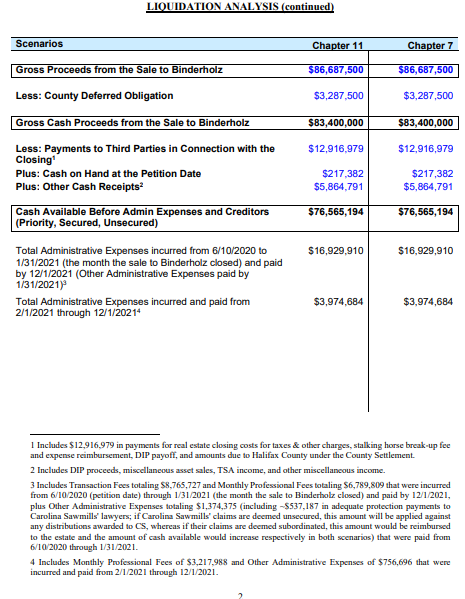 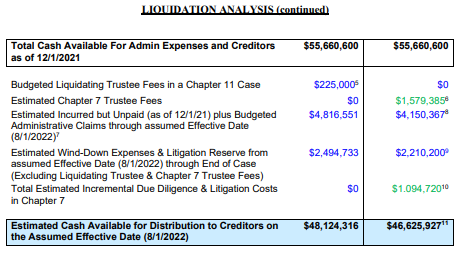 The Debtor is a subsidiary of Klausner Trading USA, Inc. (KTU) which was established in 2006 and operates as distribution company with headquarters located in Myrtle Beach, SC. The company is the sole distributor of products from Klausner US worldwide and Europe sold in North America.

The Klausner Group was founded in 1991, when Austrian Fritz Klausner built his mill in former East Germany as a green field investment. The company and sales management office, Klausner Trading International, is headquartered in Oberndorf, Austria, in close vicinity to the Klausner family’s first sawmill founded in 1918 (closed in 1996). 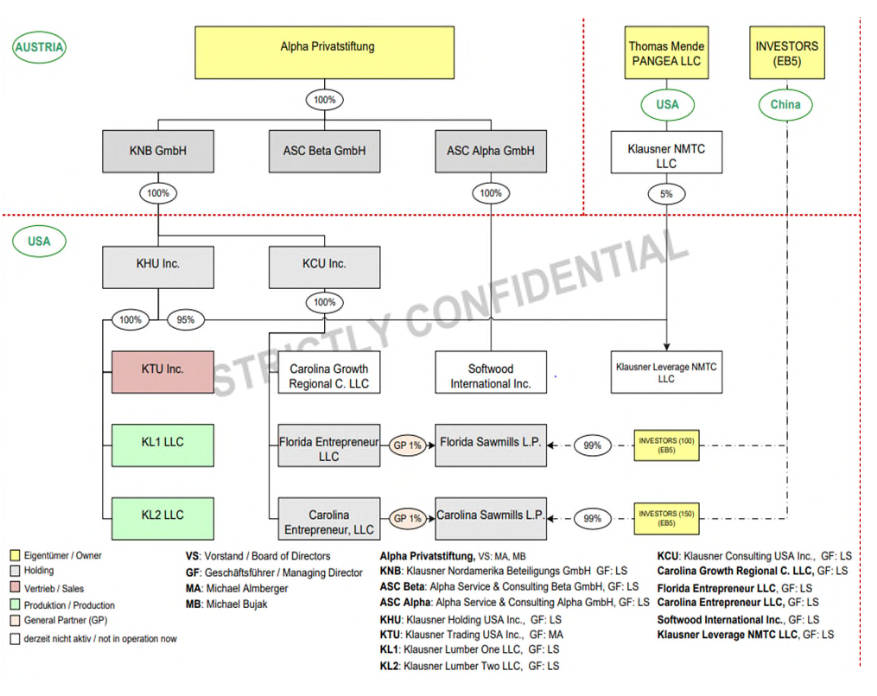 Mercy Hospital and Medical Center – South Side Hospital Files for Chapter 11 After Request to Move to Outpatient Business Model is Denied; Bleeding $7mn a Month and Hospital Staff, Debtors to Seek Sale, Reorganization or Liquidation