May 31, 2021 – Kumtor Gold Company CSJC and one affiliated Debtor (“KGC” or the “Debtors”) filed for Chapter 11 protection with the U.S. Bankruptcy Court in the Southern District of New York, lead case number 21-11051 (Judge TBD). The Debtors, an affiliate of Canadian gold mining company Centerra Gold Inc ("Centerra," NYSE" GCAU) and the operators of the Kumtor Mine in the Kyrgyz Republic, are represented by James L Bromley of Sullivan & Cromwell LLP. The Kumtor Mine is the largest private sector employer and taxpayer in the Kyrgyz Republic and the largest foreign investment in that country.

The Debtors’ lead petition notes between 1,000 and 5,000 creditors; estimated assets between $1.0bn and $10.0bn and estimated liabilities between $100.0mn and $500.0mn (see table below). Documents filed with the Court list the Debtors’ three largest unsecured creditors as (i) Machinery Intertrade Limited ($undetermined trade debt claim), (ii) Central Treasury of the Ministry of Finance of the Kyrygz Republic ($undetermined tax debt claim) and (iii) IP Consult (International) Ltd  ($undetermined trade debt claim). The Debtors have not provided amounts for any of the claims on their top 30 unsecured creditors list.

In a press release announcing the filings, the Debtors advised that: “The actions are designed to preserve the value of Centerra’s wholly owned subsidiaries that own and operate the Kumtor Mine, Kumtor Gold Company (‘KGC’) and Kumtor Operating Company (‘KOC’), and prevent any further efforts by the Kyrgyz Government to strip KGC of its assets or otherwise improperly dispose of the Kumtor Mine in violation of its investment agreements with the Company….The court-supervised process provides, among other things, for a worldwide automatic stay of all claims against KGC and KOC. Centerra hopes that this internationally recognized, orderly restructuring process will facilitate potential negotiations with the Kyrgyz Government.

The Company also announced that it is conducting a strategic review related to its ownership of KGC and KOC that will consider alternatives available to enhance value to Centerra’s stakeholders in light of recent events involving the Kumtor Mine.

Scott Perry, President and Chief Executive Officer of Centerra, noted: “We have repeatedly asked the Kyrgyz Government to discuss its concerns with us, yet it has refused to engage with us in any way. While we remain willing and available to hold a constructive dialogue with the Kyrgyz authorities, we will continue to use all available legal and financial means to protect the interests of Centerra and its stakeholders from the Government’s concerted and premeditated effort to take control of the Kumtor Mine. In particular, we will continue to pursue arbitration proceedings to enforce the longstanding agreements with the Kyrgyz Republic that give Centerra, KGC and KOC the right to own and operate  the Kumtor Mine. Those agreements are governed by New York law, and we expect the U.S. court proceedings will serve to further protect Centerra’s interests under their terms pending a restructuring or other resolution of the dispute.”

The press release continues: "Centerra has retained external advisors to assist with its strategic review, which is proceeding under the direction of a Special Committee of independent directors of the Board. As part of this review, Centerra is evaluating all possible alternatives to preserve and enhance value for its stakeholders while ensuring that the Kyrgyz Government does not directly or indirectly profit from its unlawful expropriation of the Kumtor Mine. There can be no assurance that the strategic review, or the U.S. restructuring proceeding, will lead to the successful implementation of any particular transaction or other outcome. The Company therefore continues to pursue all alternative avenues of recourse, including arbitration and Canadian legal proceedings.

The Debtors provide: "the Kyrgyz Republic seized the Kumtor Mine and the Government installed a temporary 'external manager' on May 17, 2021 in violation of its obligations to Centerra, KGC and KOC. Public statements by Government officials and actions taken by the 'external manager of the mine indicate that the Government and others, including the state-owned entity Kyrgyzaltyn JSC, intend to use spurious environmental and tax claims being asserted against KGC to place KGC into some form of insolvency proceeding in the Kyrgyz Republic and potentially strip KGC of its assets. Due to the 'external manager' taking control of the Kumtor Mine and KGC’s operations in the Republic, KGC is no longer able to defend effectively against these claims in the Kyrgyz Republic courts.

The Debtors had earlier summarized steps taken by the Kyrgyz Government as follows:

"The wrongful and illegal actions of the Kyrgyz Republic include:

Centerra has issued a series of press releases and 6-Ks that detail the actions of the Kyrgyz Government and Centerra' responses since Centerra first became aware that the Kyrgyz Government was taking steps that might jeapordize its ability to operate the Kumtor mine. See also a filed copy of a presentation made by the Debtors at their first day hearing [Docket No. 15]

In addition, Centerra has learned that on May 12, 2021, prior to the seizure of the mine, Kyrgyzaltyn JSC attempted to divert approximately US$29 million to an unauthorized bank account using a forged payment instruction sent to a third party. The account was purportedly opened in the name of KGC. This attempted fraud was identified by the third party and was not successful."

Summary of Assets and Liabilities

Assets: As of April 30, 2021, the Debtors held assets totaling approximately $1.14 billion in book value and held approximately $79.0 million in cash. However, following the Expropriation Event and the Debtors’ loss of control of the Kumtor Mine and its related facilities, the Debtors do not currently control any of their physical assets or a majority of their cash. 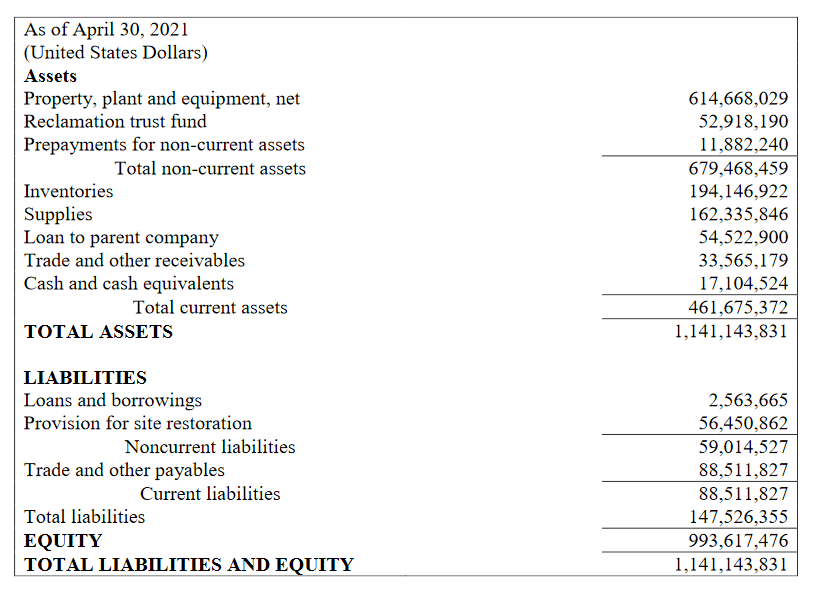 The Kumtor Mine is the largest private sector employer and taxpayer in the Kyrgyz Republic and the largest foreign investment in the country. Mine operations at Kumtor contributed 12.5% of Kyrgyz Gross Domestic Product in 2020, and some 99% of KGC’s 2,750 employees are Kyrgyz citizens. Earlier this year, Centerra announced a new life of mine plan that would extend the life of the Kumtor Mine by five years to 2031 and add more than three million ounces (85 tonnes) of contained gold at an estimated capital investment of US$2.0bn.

The Desjardins Declaration [Docket No. 9] adds: "Each of the Debtors is a Closed Joint Stock Company founded in accordance with the laws of the Republic, with their headquarters located in Bishkek, the Kyrgyz Republic.The principal business of the Debtors is to operate and develop the Kumtor gold mine (the “Kumtor Mine”), a high-altitude open pit mine located almost 4000 meters (or 13,000 feet) above sea level.  Open pit mining has been conducted at the Kumtor Mine since 1996.

Kumtor is one of the largest gold mines operated in Central Asia by a Western-based company, having produced more than 13.2 million ounces of gold between 1997 and the end of 2020.

According to Centerra: "Centerra Gold Inc. is a Canadian-based gold mining company focused on operating, developing, exploring and acquiring gold properties in North America, Asia and other markets worldwide and is one of the largest Western-based gold producers in Central Asia. Centerra owns three mines, the Kumtor Mine in the Kyrgyz Republic, the Mount Milligan Mine in British Columbia, Canada and the Öksüt Mine in Turkey. Centerra’s shares trade on the Toronto Stock Exchange (TSX) under the symbol CG and on the New York Stock Exchange (NYSE) under the symbol CGAU. The Company is based in Toronto, Ontario, Canada."

The Hertz Corporation – Files Another Amended Plan and Disclosure Statement to Reflect Flurry of Sponsor Proposals that Will See Equity Receiving Warrants and General Unsecureds Made Whole; More Plan/Plot Twists to Come?