The DIP financing package also includes a dollar-for-dollar roll-up of prepetition debt (ie $23.5mn with the interim DIP order and $9.5mn with this final DIP order).

At the July 13th hearing to consider the second Draw, Debtor's counsel Matthew Cavenaugh noted that he had "very positive update" as to the DIP financing, but more importantly as to the Debtor's previously untethered rig. On the financing, Cavenaugh noted that support amongst prepetition lenders providing the DIP financing had grown to 78% and that the Debtor had been able to certify its expectations as to case milestones (as of the Petition date, those milestones "no given whatsoever"). He also note that for the moment the Debtor had no immediate liquidity issues.

Tbe operational update was of particular interest to Judge Jones who queried (without getting a clear answer) how one does not know if a rig the size of the La Muralla IV still has an anchor. It turns out that there is in fact an anchor, with that anchor now actually deployed as are a new captain (with former experience on the Rig) and additional crew. The Debtor, which had very much wanted to repair the Rig at a US port has instead settled on Freeport, Bahamas where it will shortly be towed (at 5 knots per hour for 12 days). The size of the rig apparently made U.S. ports an unworkable option without about $2.5mn of expenses to prepare the Rig for slips available at those ports. Judge Jones was also interested in Cavanaugh's commentary that the U.S. ports did not really want a headache like the Rig at a time when they were otherwise extremenly busy, including handling higher LNG traffic.

Previously on June 17, 2022, the Court hearing the LaForta – Gestao e Investimentos case authorized the Debtor to access the first $23.5mn of the $33.0mn DIP financing package on an interim basis [Docket No. 26].

The proceeds of the DIP financing will be used to preserve and stabilize the Rig (defined below) before the upcoming hurricane season, obtain needed insurance, fund this case, and to conduct a marketing process for the Debtor’s sole asset—the Rig.

On June 16th, the Debtor filed for Chapter 11 protection noting estimated assets between $50.0mn and $100.0mn; and estimated liabilities between $1.0bn and $10.0bn. At filing, the Debtor, owner of a a ten-year old, sixth-generation, ultra-deepwater semisubmersible drilling rig (the "La Muralla" or the "Rig") currently lying idle in the Gulf of Mexico, detailed its desperate circumstances ("La Muralla is not currently chartered. It is running low on fuel and has no liquidity with which to acquire more fuel. It does not have a functioning anchor (perhaps no anchor at all). It is under-crewed. It is currently prevented from moving by the harbormaster until a 'no dispatch' order is resolved. It is uninsured…" see "Events," below) and its aspirations as to an asset sale process. firs, howver, the Debtor needs the financing to get the Rig "moved from its current position to a port in the Bahamas where it can safely be more fully repaired and can remain while a sale process is conducted."

The DIP motion [Docket No. 12] explains, “The Debtor has determined it is in the best interest of the estate to sell its lone asset, the La Muralla IV (the ‘Rig’). The Rig is a ten-year old sixth-generation, semi-submersible drilling rig. The Debtor intends to sell the Rig through a section 363 sale. Currently, the Rig is ‘parked’ in the Gulf of Mexico. The Rig has not operated under a charter for approximately eleven (11) months and during this time the Debtor has been unable to obtain a new charter agreement or otherwise monetize the Rig. However, the Rig is not stacked (i.e., it remains in an operational state) and approximately seventeen (17) workers are on board.

The Debtor simply does not have funding (absent the DIP Facility) to maintain safe operation of the Rig. Despite recent fuel purchases using the Prepetition Advances the Rig has only a few days of fuel remaining (assuming good weather) and the Debtor does not have the resources to purchase any more fuel to keep the Rig and the workers on board safe. This is especially important as the Rig does not currently have a working anchor, so it is reliant on its own propulsion system to maintain a safe position (this is not just a theoretical risk as a similar rig, owned by a sister company to the Debtor, recently ran aground). Additionally, the Debtor’s hull, machinery, liability, and D&O insurance have lapsed and while the Debtor is binding new or renewed coverage, it needs the proceeds of the DIP Facility to pay for these policies and ensure coverage can begin as of the Petition Date. The fact that hurricane season has just begun makes the Rig’s current situation all the more precarious and highlights the need to properly secure the Rig—which can only occur if the Debtor obtains access to the DIP Financing

In addition to fuel and insurance, the Debtor intends to immediately begin to use the DIP Financing to make necessary repairs to the Rig so that it can be moved from its current position to a port in the Bahamas where it can safely be more fully repaired and can remain while a sale process is conducted. The DIP Financing will provide the Debtor the liquidity needed to preserve and stabilize the Rig, move it to an appropriate location, and conduct a value-maximizing sale process. Absent access to the DIP Financing, the Debtor will have absolutely no liquidity and no ability to protect the Rig, the workers on the Rig, or vessels, property, and natural resources near the Rig.

Any Noteholder that is not a Backstop Lender shall have the right (solely during the fourteen (14) calendar days following entry of the Interim DIP Order) to elect to participate in the DIP Facility for its ratable portion of the DIP Facility. Elections must be made by contacting the Backstop Lenders’ counsel at mtehrani@milbank.com on or before 11:59 p.m. eastern time on the 14th day following entry of the Interim DIP Order. Any Noteholder that timely elects to participate and timely funds its portion of the DIP Facility shall be an “Electing Lender”

As of the Petition Date, the Debtor has the following indebtedness:

Events Leading to Filing of Chapter 11

In a declaration in support of the Chapter 11 filing (the “Weinhoffer Declaration”), David Weinhoffer, the Debtor's chief restructuring officer, detailed the events leading to LaForta’s Chapter 11 filing. The Weinhoffer Declaration provides: “The Debtor filed its chapter 11 case because it has no money, no revenue stream, likely over $1 billion in secured debt and an uncertain path to realizing value from a sole asset. The asset requires material investment and attention to maintain and return to an active operating state. The asset is La Muralla IV [which currently sits about four miles off the coast of Tampico, Mexico], a ten-year old, sixth-generation, ultra-deepwater semisubmersible drilling rig (the 'La Muralla').

La Muralla is not currently chartered. It is running low on fuel and has no liquidity with which to acquire more fuel. It does not have a functioning anchor (perhaps no anchor at all). It is under-crewed. It is currently prevented from moving by the harbormaster until a 'no dispatch' order is resolved. It is uninsured. The Debtor, its parent, and certain of its noteholders have been working to find a solution for quite some time. At this point, there is no alternative to chapter 11." 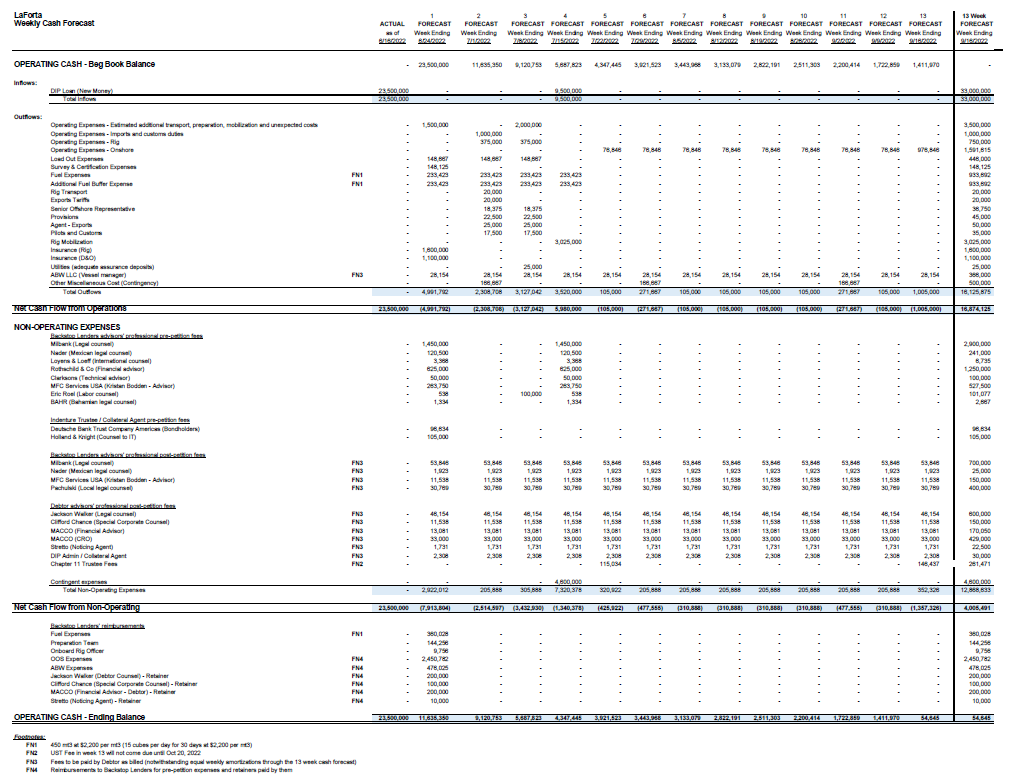