In a press release announcing the filing, the Debtors advised that they had “initiated a voluntary reorganization and restructuring of their debt under Chapter 11 protection in the United States with the support of the Cueto and Amaro families and Qatar Airways, two of the largest shareholders of LATAM. In light of the effects of COVID-19 on the worldwide aviation industry, this reorganization process provides LATAM with an opportunity to work with the group's creditors and other stakeholders to reduce its debt, access new sources of financing and continue operating, while enabling the group to transform its business to this new reality.

The group has secured the financial support of shareholders, including the Cueto and Amaro families, which have lasting ties to LATAM, and Qatar Airways, to provide up to $900 million in debtor-in-possession (DIP) financing. These partners have a profound understanding of the industry, the group and its operational challenges. Their support demonstrates a belief in LATAM and its affiliates and their long-term sustainability. To the extent permitted by law, the group would welcome other shareholders interested in participating in this process to provide additional financing. In addition, as of the filing, the group had approximately USD $1.3 billion in cash on hand.

LATAM and its affiliates are also in discussions with their respective governments of Chile, Brazil, Colombia and Peru to assist in sourcing additional financing, protect jobs where possible and minimize disruption to its operations."

In a declaration in support of the Chapter 11 filing (the “Alfonsin Declaration”), Ramiro Alfonsín, the Debtors' Chief Financial Officer, detailed the events leading to LATAM’s Chapter 11 filing. The Alfonsin Declaration  states: "Over the past years, LATAM has made key strategic decisions that have enabled it to experience meaningful growth and increased balance sheet strength. Specifically, LATAM has reduced its operating costs while also expanding and improving its operations, while deleveraging and strengthening its balance sheet. Ultimately, the company has achieved four consecutive years of net profits and, in last three years, generated over $1 billion of operating cash flow after investments every year.

Despite this recent track record of success…the Debtors’ Chapter 11 filings are precipitated by the unprecedented impact caused by the COVID-19 pandemic. The effects of the pandemic have led to a dramatic reduction in worldwide air travel, including an approximate 95% reduction in LATAM’s passenger service, which comprises the vast majority of LATAM’s operating revenue. Although the Debtors believe the fundamentals of their business remain strong, and that LATAM is poised to continue its success as South America’s leading airline once air travel returns to historical norms, these Chapter 11 Cases are necessary to protect the Debtors’ assets and to administer and manage the Debtors’ existing obligations.

LATAM has significant obligations coming due in the following day and weeks, including a minimum shareholder dividend equal to 30% of its 2019 profits, which would be required to be paid by applicable Chilean corporate law, amounting to $57,129,110.64 to be paid on May 28, 2020, as well as over $130 million in debt servicing obligations due from May 28, 2020 through the first week of June alone.  If LATAM did not file these Chapter 11 Cases, payment of these obligations, or the risk of anticipated litigation or collection actions associated therewith, would substantially erode LATAM’s cash position even further and deplete resources needed to maintain operations."

As of the Petition date, the Debtors had a total of $7.570bn in financial debt obligations, $457.0mn million of which is contracted by LATAM Airlines Brazil, a non-Debtor affiliate.

The fleet consists of passenger aircraft as well as twelve dedicated B767 cargo freight aircraft (eleven of which are operated by the Debtors). On average, LATAM’s fleet is approximately nine years old. 38.The Debtors’ fleet consists of thirty-five owned aircraft18 as well as 187 aircraft financed under finance leases and ninety-eight aircraft leased under operating leases. In addition, there are twenty aircraft leased or financed directly by Brazilian Non-Debtor Affiliates. The finance leases are with entities located in the Cayman Islands and Delaware (the “SPVs”), some of which are owned by LATAM Parent. The SPVs typically lease the planes to LATAM Parent, which then subleases the aircraft to the other operating entities, including certain of the Debtors.

Given the current economic climate, the Debtors are likely to have a surplus of aircraft in their fleet.  Because fleet obligations comprise a significant portion of the Debtors’ obligations, the Debtors are likely to seek to reject, renegotiate and/or assume and assign certain aircraft leases in order to revitalize the size and makeup of their fleet. Similarly, the Debtors intend to use the substantive and procedural tools available in bankruptcy to maximize the efficiency of their ongoing operations, including with respect to prepetition debt and lease obligations, and to take advantage of current market conditions in order to renegotiate certain key contractual relationships."

LATAM Airlines Group is a Chilean-based airline holding company formed through the business combination of LAN Airlines S.A. of Chile and TAM of Brazil in 2012. Following the combination, LAN Airlines S.A. became “LATAM Airlines Group S.A.” and TAM S.A. continues to exist as a subsidiary of LATAM. The Company is primarily involved in the transportation of passengers and cargo and operates as one unified business enterprise. During 2016, we began the transition of unifying LAN and TAM into a single brand: LATAM.

LATAM’s airline holdings include LATAM and its affiliates in Chile, Peru, Argentina, Colombia and Ecuador, and LATAM Cargo and its affiliate LANCO (in Colombia), as well as TAM S.A. and its affiliates TAM Linhas Aereas S.A (LATAM Airlines Brazil), TAM Transportes Aereos del Mercosur S.A., (LATAM Airlines Paraguay) and LATAM Cargo. LATAM is a publicly traded corporation listed on the Santiago Stock Exchange (“SSE”), the Chilean Electronic Exchange and the New York Stock Exchange (“NYSE”) with a market capitalization of US$4.12 billion as of February 29, 2020.

The Alfonsin Declaration adds: "LATAM is Latin America’s leading airline group, with a history extending back ninety years, and boasting one of the largest route networks in the world.  LATAM is the fourteenth-largest airline group in the world, measured by passengers carried, and the most important carrier in Latin America.  We carry more passengers in the region than any other carrier.  In fact, 40% of passengers traveling within the region traveled with LATAM in 2019. 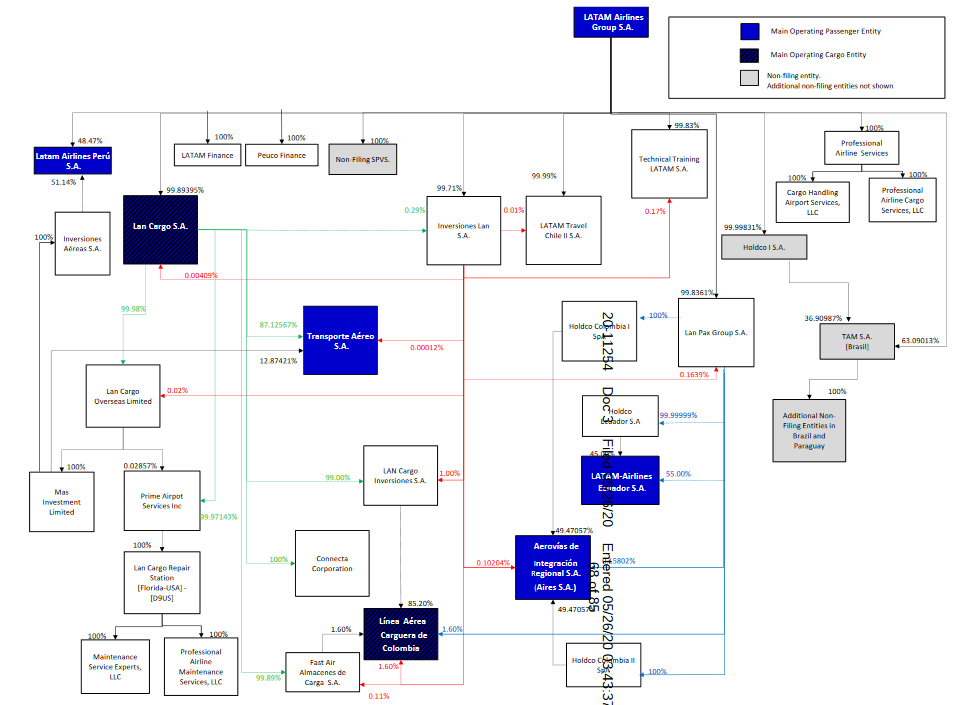