December 3, 2020 – Privately held Lighthouse Resources Inc. and 13 affiliated Debtors (“Lighthouse” or the “Debtors”) filed for Chapter 11 protection with the U.S. Bankruptcy Court in the District of Delaware, lead case number 20-13056. The Debtors, who own and operate thermal coal mines in and around the Powder River Basin, are represented by L. Katherine Good of Potter Anderson & Corroon LLP. Further board-authorized engagements include (i) Jackson Kelly PLLC as general bankruptcy counsel, (ii) BDO USA LLP as restructuring advisors and (iii) Stretto as claims agent.

In December 2014, Australia's Ambre Energy sold all of its North American assets to Denver-based private equity firm Resource Capital Funds for a reported $18.0mn and the Debtors changed their name from Ambre Energy North America to Lighthouse Resources Inc.

On December 2, 2020, the Debtors, their prepetition secured lenders (the “Prepetition Secured Lenders”) and the "Sureties" (ie, Zurich American Insurance Company, Atlantic Specialty Insurance Company and Westchester Fire Insurance) entered into a restructuring support agreement (the “RSA,” attached to the Adlard Declaration as Exhibit 3).

The Adlard Declaration provides: "In principal, the RSA provides that after the filing of these chapter 11 cases the Debtors will work toward a chapter 11 plan, which upon confirmation and its effective date, only LHR Coal and its subsidiaries (the 'LHR Coal Entities') will survive, and the LHR Coal Entities’ membership interests and assets will vest in a reclamation trust (the 'Trust') to satisfy the reclamation and environmental obligations at the Decker Mine.

The Sinking Fund will be funded by any remaining collateral held by the Sureties ('Surety Collateral'), portions of distributions KCP receives from Black Butte, and certain proceeds from the sale of the LHR Coal Entities’ assets following plan confirmation, as set forth in the RSA.

Any funds remaining in the Sinking Fund will be reserved to pay KCP’s share of the Black Butte reclamation costs when it ceases operation, in accordance with the RSA.

The Debtors, through their broker, Jones Lang LaSalle Americas, Inc. ('JLL'), have received a term sheet for the Millennium Facility and the Debtors intend to file a sale motion on or soon after the Petition Date to establish and begin the sale process."

In a declaration in support of the Chapter 11 filings (the “Adlard Declaration”), Darrin T Adlard, the Debtors’ Vice President of Finance and Accounting and Treasurer, detailed the events leading to Lighthouse’s Chapter 11 filing. The Adlard Declaration provides: “The Company has focused on sales to the Indo-Pacific Region where demand for thermal coal in Asia has been increasing and port access for coal from the West Coast of the United States has been limited.

Lack of port capacity from the West Coast of the United States has restricted access from the Decker Mine and other producers in the West to growing demand in Asia.

Lighthouse has been working for over eight years to permit the CET [the coal export terminal, aka the “Millennium Facility,” which has struggled to obtain required regulatory permits]. It was hoped that the CET would provide improved access for Debtors to ship their coal to Asian markets and lead to an increase in production.

In the years leading up to the Petition Date, the price for thermal coal in the United States has been impacted by decreased demand in the United States and Europe. Recent prices in Asia have been impacted by the COVID-19 global pandemic with the associated decrease in industrial and business activity due to government-imposed restrictions. Due to decreased prices in Asia connected to the COVID-19 global pandemic, Decker Coal has experienced a drastic reduction in export sales this year due to an oversupplied market.

Coal production in the United States for Q2 2020 was the lowest it has been in almost 50 years.

All of the economic and regulatory issues in the thermal coal space, combined with those specific to the Debtors, have caused a liquidity crisis and the need for the relief sought in these Chapter 11 Cases.

According to the Debtors: “Lighthouse Resources Inc. is an infrastructure and resource management company, integrating resource assets, export channels and marketing expertise to serve domestic customers and Asian trade allies. The company owns and operates thermal coal mines in and around the Powder River Basin and is developing port export infrastructure in the US Pacific Northwest.

The company is privately held and headquartered in Salt Lake City, Utah."

The Declaration adds: "…the coal-side Debtors, LHR Coal and its subsidiaries, operate the Decker Mine in Montana, and LHR Coal subsidiary, KCP, is a fifty percent (50%) owner of the Black Butte joint venture that mines coal in Wyoming. The Debtors produce subbituminous thermal coal with low sulfur content, which they sell to domestic and foreign markets, with a foreign focus on Asia. Thermal coal is primarily consumed by electric utilities and industrial companies as fuel for electricity generation.

The non-coal Debtors, LHR Infrastructure and its subsidiaries, also operate the Millennium Facility in Washington State." 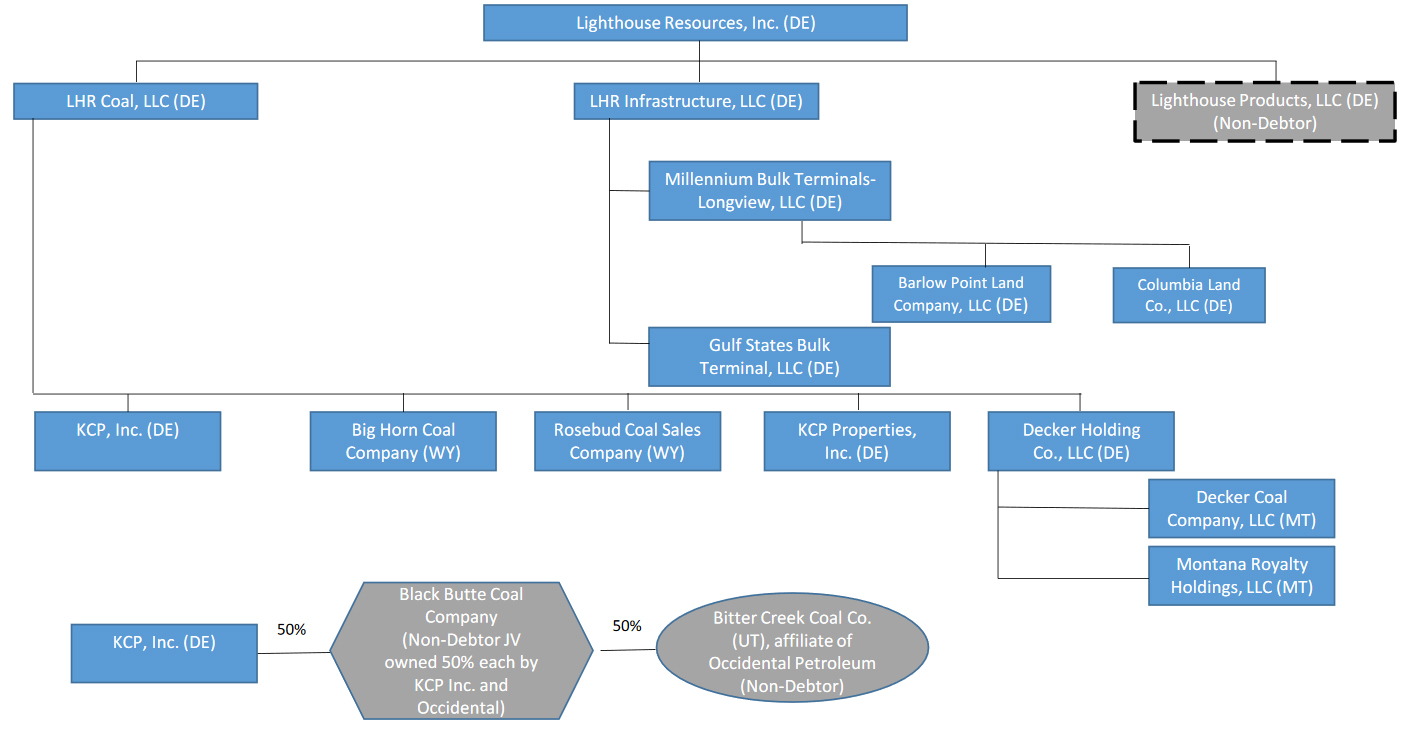