August 25, 2021 – The Court hearing the L’Occitane case issued an order confirming the Second Amended Plan of Reorganization filed by the Debtor in conjunction with its official committee of unsecured creditors (the “Creditors’ Committee” and, together with the Debtor, the “Plan Proponents”) [Docket No. 521].

On January 25, 2021, L'Occitane, Inc. (“L'Occitaine or the “Debtor”) filed for Chapter 11 protection with the U.S. Bankruptcy Court in the District of New Jersey, case number 21-10632 (Judge Kaplan). At filing, the Debtor, a leading U.S. retailer of Provence-inspired beauty and well-being products, noted assets of $161.1mn and liabilities of $161.7mn.

In a press release heralding completition of lease renegotiation/rejection efforts and Plan confirmation, the Debtors noted that they had: "successfully completed the restructuring of its U.S. lease portfolio, creating a sustainable store platform for the long term. The optimized footprint includes 133 L'OCCITANE en Provence boutiques, providing the Company with a robust, go-forward brick-and-mortar presence to best serve customers across multiple channels…positioning L'Occitane to emerge at month's end from the Chapter 11 process commenced in January to implement the store footprint optimization."

The Debtor's memorandum memorandum of law in support of Plan confirmation [Docket No. 502] notes: “Almost seven (7) months after seeking bankruptcy protection, the Debtor has developed a go-forward strategy to be effectuated via the Plan that largely preserves the Debtor’s existing retail operations and leaves Holders of Claims and Interests fully unimpaired. The primary concessions achieved through this chapter 11 case have been attained through a coordinated effort between the Debtor and its landlord constituents (in consultation with the Committee) to negotiate fully consensual lease amendments. This process has led to the modification and assumption of 133 leases, the need for which drove the Debtor to initiate this restructuring process in the first instance.

With these revised economic terms in hand, the Debtor is well-positioned for continued going concern operations and future success, which inures to the benefit of all constituents, including the Debtor’s landlord counterparties. Notably, only 40 leases have been rejected in this Chapter 11 Case, and the Plan provides the landlord counterparties to these rejected leases (as well as the Debtor’s other unsecured creditors) with a 100% recovery on account of their claims.

The Plan is the product of extensive good faith negotiations by and among the principal economic interests in this Chapter 11 Case: (1) the Debtor; (2) the Committee; and (3) L’Occitane International, S.A. (‘International’), the Debtor’s corporate parent and sole equity owner. The incredible results represented by the Plan, which were achieved in the face of challenging and uncertain circumstances, particularly in light of ongoing unpredictability with respect to the global COVID-19 pandemic, could only be realized because of the significant contributions by International, who has agreed to fund distributions under the Plan with an unsecured Exit Loan Facility and provide a guaranty to the Debtor for Disputed Claims (the ‘Disputed Claim Guaranty’) and disputed Cure Amounts (the ‘Cure Disputed Guaranty’) and the diligent efforts by the Debtor, the Committee, and other estate fiduciaries.”

The Memorandum further states, "The lone unresolved objection to the Plan [D.I. 491] (the 'UST Objection') was asserted by the Office of the United States Trustee (the 'U.S. Trustee'). The UST Objection argues that the Plan’s release, exculpation and injunction provisions are inappropriate and should not be approved.

However…these provisions are (1) a fair and necessary component of the Debtor’s overall Plan structure and the resolutions reached therein, (2) supported by more than adequate consideration and (3) in the best interests of the Debtor’s estate and its creditors. Because the Plan satisfies all of the disclosure and confirmation requirements of the Bankruptcy Code, including sections 1122, 1123, 1125, 1126 and 1129, the Plan Proponents respectfully submit that the Disclosure Statement should be approved on a final basis, and the Plan should be confirmed."

The Disclosure Statement [Docket No. 411] adds, “After having right-sized its brick and mortar footprint across the United States…the consummation of a chapter 11 plan of reorganization is the principal final objective of this Chapter 11 Case.

The Debtor and the Creditors’ Committee are the proponents of the Plan within the meaning of section 1129 of the Bankruptcy Code. Generally speaking, the Plan provides that each of the Holders of Allowed Claims will be paid in full and Holders of Interests in the Debtor shall retain their Interests.

The Plan classifies Holders of Claims and Interests according to the type of the Holder’s Claim or Interest, as more fully described below. Because each of the Holders of Allowed Claims in Class 1 through Class 5 are paid in full and the Class 6 equity interests will remain, they are not entitled to vote to accept or reject the Plan.

The Disclosure Statement [Docket No. 411] attached the following:

On August 3, 2021, the Plan Proponents filed a Plan Supplement [Docket No. 469], which attached the following:

In a declaration in support of the Chapter 11 filing (the “Tanini Declaration”), Yann Tanini, the Regional Managing Director of L’Occitane, Inc., detailed the events leading to Debtors' Chapter 11 filing. The Tanini Declaration provides: “Like most retailers in the United States, the Debtor has been impacted by the COVID-19 pandemic, which has significantly limited retail operations throughout the country and suppressed consumer willingness to shop in person. Indeed, the Debtor’s retail revenue between April and December 2020 decreased by 56.5% compared to the same period during the prior year. These changes in consumer shopping habits may endure even after the pandemic subsides, continuing to impact brick-and-mortar retail into the future.

Even prior to the pandemic, the Debtor was experiencing a decline in sales revenue from its brick-and-mortar boutiques, while its e-commerce revenue has dramatically increased. Consequently, the Debtor’s lease obligations were becoming increasingly untenable and prompted the Debtor to assess and gradually reduce its lease portfolio. The profound and sustained impact of the pandemic, however, has forced the Debtor to more aggressively address the rapidly widening gulf between its brick-and-mortar retail revenue and its substantial lease obligations, which no longer reflect the market. To this end, the Debtor diligently attempted to negotiate new lease terms with its landlords in the hope of achieving an out-of-court restructuring. Landlords, however, have been reluctant to negotiate the type of long-term adjustments to leases that are necessary to ensure the Debtor’s continued viability.”

The Debtor’s chief financing source is International, which has provided capital assistance to the Debtor over the years in the form of periodic unsecured loans intended to assist the Debtor fund operating shortfalls pursuant to a certain Group Cash Management Agreement between the Debtor and International, dated April 1, 2018.

As of the Petition Date, International is by far the Debtor’s largest unsecured creditor, as it is owed approximately $26,000,000 related to loans under the Group Cash Management Agreement, plus approximately $4,500,000 for inventory, for a total liability of approximately $30,500,000. Additionally, the Debtor has executed letters of credit backed by Crédit Industriel et Commercial (“CIC”) in favor of certain landlords in the aggregate amount of approximately $1.77 million. 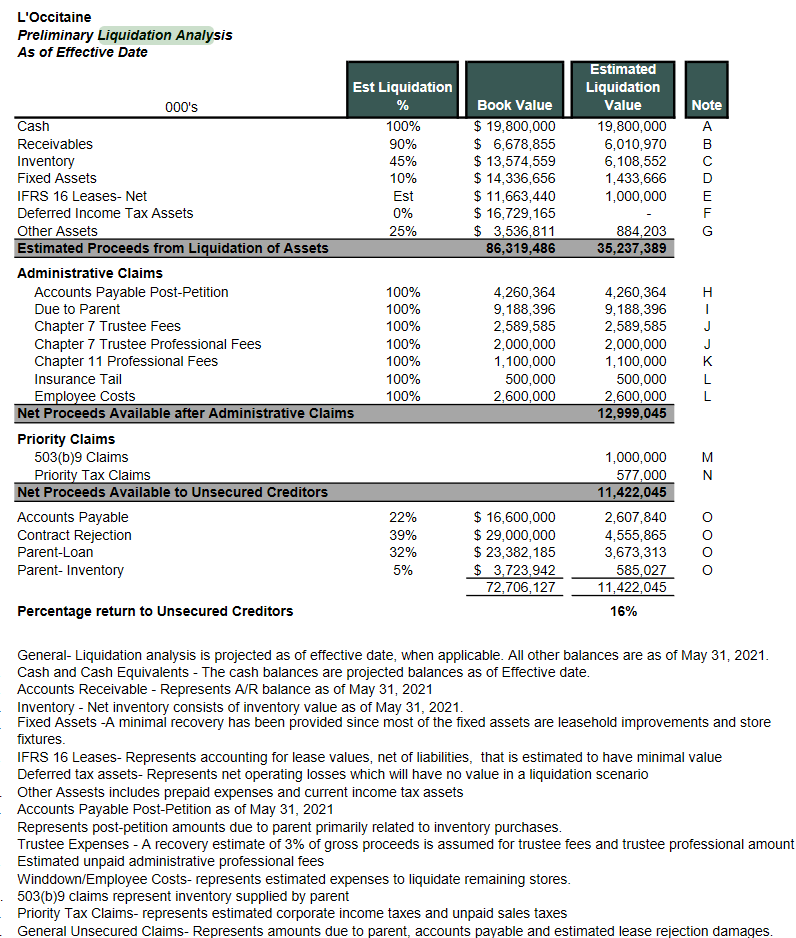 According to the Debtors: “Founded by Olivier Baussan more than 40 years ago, L’OCCITANE captures the true art de vivre of Provence, offering a sensorial immersion in the natural beauty and lifestyle of the South of France. From the texture of L’OCCITANE products to the scent, each skincare, body care, and fragrance formula promises pleasure through beauty and well-being – a moment rich in enjoyment and discovery that goes beyond tangible benefits to create a different experience of Provence. L’OCCITANE products are available at usa.loccitane.com and in boutiques throughout the U.S.”

The Tanini Declaration adds: “The Debtor is the wholly-owned United States subsidiary of L’Occitane International, S.A. (the “Parent” or “International”), which is organized under the laws of Luxembourg and headquartered in Plan-Les-Ouates, Switzerland. The L’Occitane brand was originally founded in 1976 in Manosque, France by Olivier Baussan, who used a steam distillation process to produce essential oil from wild rosemary and lavender, as well as manufactured vegetable-based soaps, which he sold in the open air markets of the Provence region of France. The name ‘L’Occitane’ hails from the women of Occitania, the area spanning southern France, northeastern Spain, and northern Italy during the Middle Ages. The first L’Occitane factory and boutique opened in 1981 in Volx, France.

The Debtor was formed on July 10, 1995 as a means to expand the L’Occitane brand in the United States. The Debtor is incorporated in the state of New York, and maintains its headquarters at 111 West 33rd Street, 20th FL, New York, New York 10120.

The Debtor opened its first boutique in the United States in 1996. The Debtor presently operates 166 boutiques in 36 states and Puerto Rico, at which the Debtor sells L’Occitane and affiliate-branded cosmetic and well-being products. The majority of the boutiques are located in regional malls, but there are also several street-front locations, airport locations, and outlets. The Debtor also sells products directly to customers through its website,

As of the fiscal year that ended on March 31, 2020, the Debtor comprised 9.1% of the Parent’s consolidated sales.”