In August 2013, the Debtors, plagued by construction delays and operational shortfalls at the Longview Plant and unable to repay $1.0bn borrowed to fund construction of that plant, filed an earlier Chapter 11 (DE: 13-12211). In April 2015, the Debtors exited this first Chapter 11 with a new money $325.0mn exit facility provided by new third party lenders and 100% owned by their prepetition lenders. The Disclosure Statement notes that “The lenders and equity owners have remained similar to this day…”

According to the Keffer Declaration (defined below): "The Debtors commenced these chapter 11 cases to implement this restructuring through a prepackaged plan of reorganization (the “Plan”), a copy of which has been filed contemporaneously herewith. Approximately 90 percent of the Debtors’ prepetition secured lenders have documented their support for the Plan and the Debtors’ chapter 11 cases through a restructuring support agreement (the “RSA”). The RSA is attached to the Keffer Declaration as Exhibit A.

According to the Disclosure Statement: "The Plan provides for a comprehensive restructuring of Longview’s obligations, preserves the going-concern value of its business, and protects the jobs of more than140 employees. More specifically, the Plan provides, among other things, that:

The following is summary of classes, claims, voting rights, and expected recoveries (defined terms are as defined in the Plan and/or Disclosure Statement)

FN: The projected Plan recovery for Class 3 is a blended average assuming 100% participation based on the low to high range of recovery, which is 3.4% to 40.9%, respectively.

In a declaration in support of the Chapter 11 filing (the “Keffer Declaration”) [Docket No. 4], Jeffery L. Keffer, the Debtors' Chief Executive Officer, detailed the events leading to Longview's Chapter 11 filing. The Keffer Declaration states: "The Longview Plant was designed with a vision for future expansion. In addition to the investment in the first clean coal facility, among other things, the initial investors in the Longview Plant built in significant infrastructure to allow for future development of a second clean coal facility. Longview has been developing plans to capitalize on these early investments, which now offer Longview the opportunity to construct a state-of-the-art 1,210 megawatt natural-gas-fired combined cycle plant at a cost lower than its competitors and the space to construct approximately 188,000 solar panels that will generate 70 megawatts (direct current). Realization of these development plans would provide operational and fuel diversity to help shelter Longview from the volatility of energy industry trends in the long-term. Further, projections reflect that, upon construction, these additional facilities would increase revenue potential at lower fixed costs per kilowatt of energy.

But Longview has not been able to execute on these plans due to liquidity concerns. More specifically, a combination of the rapid expansion of natural gas production, the use of natural gas in electric power generation in recent years, and lower energy prices due to a series of unseasonably warm winters has decreased energy prices. Year-to-date, the average price per megawatt for electricity sold into the PJM on a day-ahead basis was approximately $17.65 per megawatt-hour less than the average price in 2018 and 2019. This has greatly reduced Longview’s short-term revenues. At the same time, Longview’s debt service obligations have limited its ability to fully pursue hedging activities that would protect its margins and development projects to help it lower its overall costs.

Approximately $25 million of obligations under the Revolving Facility will mature on April 13, 2020, necessitating the chapter 11 filing." 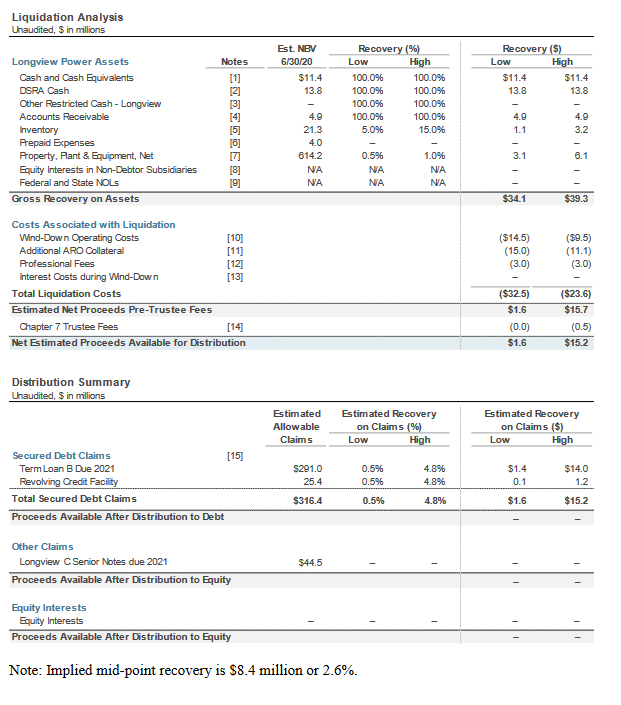 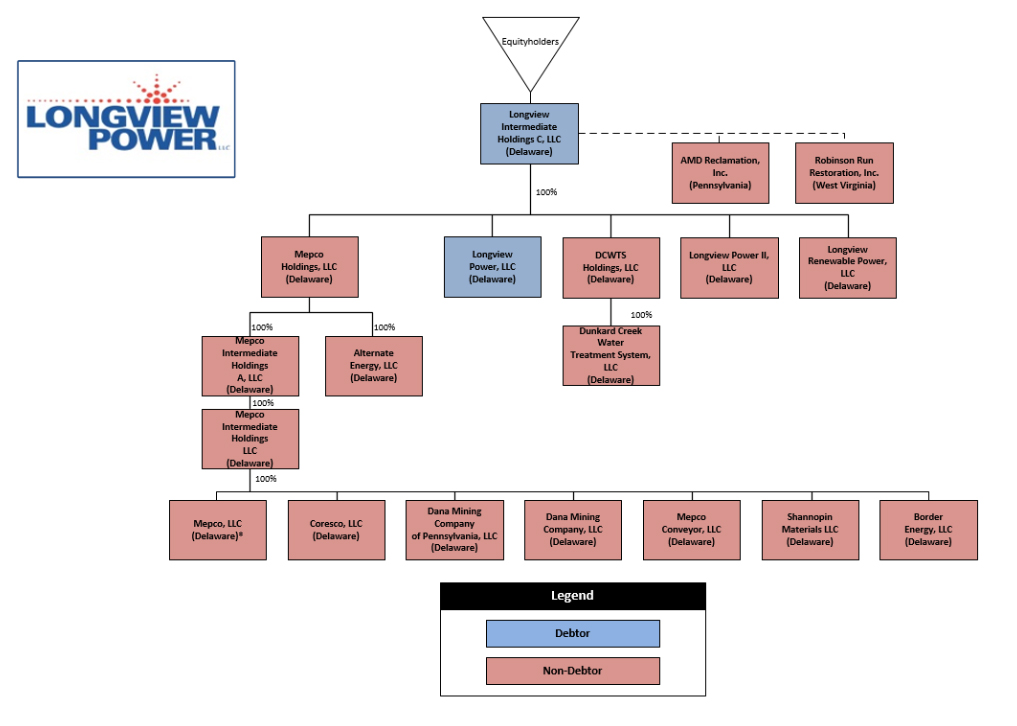 Longview owns and operates a 710 net megawatt supercritical coal-fired power generation facility located in Maidsville, West Virginia (the “Longview Plant”) that uses equipment, processes, designs, and technology developed specifically for use at the Maidsville site. The Longview Plant is the most efficient coal-fired power plant in the Pennsylvania-Jersey-Maryland Regional Transmission Organization (“PJM”)2 and one of the most environmentally compliant and cleanest coal plants globally. Longview’s operations generated approximately $28.1 million of adjusted EBITDA in 2019. Longview has approximately $355 million in funded debt as of the Petition Date.