On the same day, the Court hearing the LSC Communications cases issued an order approving the (i) adequacy of the Debtors' Disclosure Statement, (ii) Plan solicitation and voting procedures and (iii) a timetable culminating in a February 4th confirmation hearing [Docket No. 1057].

On October 7, 2020, the Court issued an order approving the sale of substantially all of the Debtors’ assets to an affiliate of Atlas Holdings LLC (“Atlas”), with that sale closing on December 4th and the majority of the sale’s cash proceeds being used to pay off in full the Debtors’ prepetition revolving credit obligations ($253.0mn) and fund the Debtors’ wind-down ($88.7mn) (see further below).

According to the Revised Disclosure Statement [Docket No. 1050], "The Plan provides for the distribution of the proceeds (i) of the Sale and (ii) from the liquidation of the Debtors’ assets that remain after consummation of the Sale. The structure of the Plan is informed by the Debtors’ expectation that the substantial majority of Claims asserted against the Debtors will be classified into one of three categories: (a) Other Secured Claims, comprised of Secured Claims that are not Junior Remaining Claims; (b) Junior Remaining Claims, comprised of all remaining indebtedness under the Term Loan Facility and the Senior Secured Notes minus the Credit Bid Amount; and (c) General Unsecured Claims, comprised of pension, trade and other unsecured claims. Additionally, because Buyer will assume the Debtors’ postpetition trade payables pursuant to the Acquisition Agreement, the Plan does not address treatment of postpetition Claims of trade creditors, which Claims will be assumed and paid in full by Buyer.

On the Effective Date, in partial satisfaction of Allowed General Unsecured Claims, the Litigation Trust will be established and funded with $1,000,000 from the Final Cash Consideration and will be vested with the claims (and the Net Recoveries thereof) of the Debtors related to the Spin-Off against (a) RRD, (b) Donnelley Financial Solutions, Inc. and (c) with respect to the entities set forth in clauses (a) and (b), each of such entities’ current and former directors, officers, advisors, professionals and agents (the 'Preserved Potential Claims'). The Preserved Potential Claims shall not include any Claim or Cause of Action (i) under section 547 of the Bankruptcy Code or any similar state law, (ii) that would result in a liability to or obligation of Buyer or (iii) against directors and/or officers to the extent such Claim or Cause of Action is not fully covered by and payable exclusively from policy limits of the insurance maintained by RRD or Donnelley Financial Solutions, Inc. (or their affiliates) for the benefit of any such director or officer. The Litigation Trustee has not conducted a thorough investigation of the Preserved Potential Claims and, accordingly, there can be no guarantee of any recovery from the Litigation Trust Assets."

The following is an updated summary of classes, claims, voting rights and expected recoveries (defined terms are as defined in the Plan and/or Disclosure Statement; see also the Amended Liquidation Analysis below):

The Disclosure Statement attached the following documents [Docket No. 1050]:

On October 7, 2020, the Court hearing the LSC Communications cases issued an order approving the sale of substantially all of the Debtors’ assets to ACR III Libra Holdings (“Buyer”) [Docket No. 876].

The Buyer is an affiliate of Atlas Holdings LLC (“Atlas”) and the asset purchase agreement (the “APA”) memorializing the terms of the purchase is attached to the order at Exhibit A. The purchase price was subject to a number of adjustments, but was based on an initial credit bid of $63,437,000 and cash that is capped at “Enterprise Value” ($440.0mn, less a number of adjustments reflecting cure costs, expenses, working capital, taxes, etc.). The cash element includes a $37.0mn deposit and an anticipated $274.4mn closing payment, with that cash used, inter alia, to pay off in full the Debtors’ prepetition revolving credit obligations ($253.0mn) and fund the debtors wind-down ($88.7mn).

In their press release announcing the Court’s approval of the sale, the Debtors stated that: “an affiliate of Atlas Holdings LLC (‘Atlas’) with the support of certain of LSC’s secured creditors (the ‘Creditor Group’), will acquire substantially all of the Company’s assets. The transaction remains subject to customary closing conditions, including regulatory approvals.”

The Debtors describe themselves as follows: “With a rich history of industry experience, innovative solutions and service reliability, LSC Communications is a global leader in print and digital media solutions. Our traditional and digital print-related services and office products serve the needs of publishers, merchandisers and retailers around the world. With advanced technology and a consultative approach, our supply chain solutions meet the needs of each business by getting their content into the right hands as efficiently as possible.”

LSC was formed on October 1, 2016 when it was spun-off from RRD, as part of a separation of RRD into three separate and independent publicly-traded companies. Prior to its suspension from trading in December 2019, LSC traded on the New York Stock Exchange under the ticker “LKSD.” It now trades on the OTCQX Best Market under the same ticker. The Company has offices, plants and other facilities in 28 states, as well as operations in Mexico, Canada and the United Kingdom. The Company currently has approximately 19,500 total employees worldwide, of which approximately 15,809 employees are located in the United States. 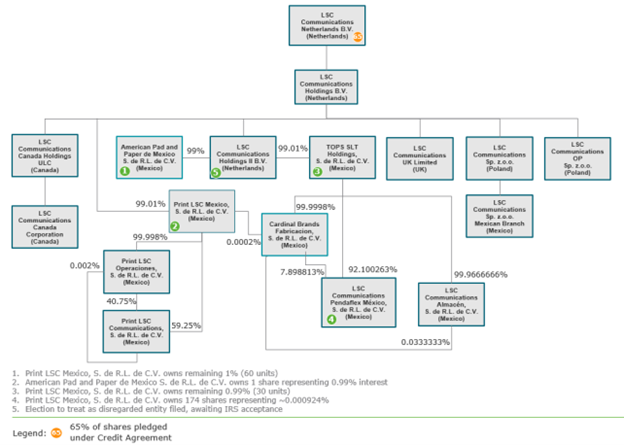