LSC was formed on October 1, 2016 when it was spun-off from R.R. Donnelley & Sons ("RRD") as part of a separation of RRD into three separate and independent publicly-traded companies. In June 2019, after a seven month investigation during which the Debtors' business efforts were largely put on hold, the Department of Justice ("DOJ") filed a civil antitrust lawsuit seeking to block the Debtors' proposed merger with Quad/Graphics, Inc. ("Quad"). A month later, the two parties (combined revenues of $8.0bn in 2018) called off their merger with Assistant Attorney General Makan Delrahim, an early and vocal supporter of President Trump's 2016 campaign efforts and a former Deputy White House Counsel, declaring: “This result is a victory for American consumers and publishers, and a testament to the Division’s resolve to enforce the antitrust laws.”

In a press release announcing the filing, the Debtors advised that: “The Company’s decision follows a comprehensive evaluation of opportunities to reduce its debt and better position LSC to compete and deliver exceptional products and services to its clients. LSC has sufficient liquidity to continue operating its business safely and efficiently … LSC’s subsidiaries in Mexico and Canada are not included in the court proceedings and will continue to operate in the normal course.

In its reorganization, LSC is continuing constructive discussions with its lenders regarding strategic alternatives and the terms of a potential financial restructuring plan. LSC has received commitments for $100 million in debtor-in-possession ('DIP') financing from certain of its revolving lenders, subject to the satisfaction of certain closing conditions.

Thomas J. Quinlan III, the Debtors’ Chairman, President and Chief Executive Officer, commented” “Since the termination of our merger with Quad Graphics last year, and given the fundamental changes in the industry, the LSC Board and management team have taken proactive and aggressive steps to improve our overall cost structure and streamline our manufacturing platform while continuing to pursue new business opportunities….During that time, we have closed, or are in the process of closing, eight facilities, won new contracts and delivered on our commitments to our clients and vendors. At the same time, we continued to evaluate the best path to creating a more sustainable capital structure for LSC with the support of our senior lenders through the Waiver and Forbearance Agreement."

In a declaration in support of the Chapter 11 filing (the “Coxhead Declaration”), Andrew Coxhead, the Debtors' Chief Financial Officer, detailed the events leading to LSC’s Chapter 11 filing. The Coxhead Declaration states: "Although the Company is a market leader in the printing and printing-related services industries, the Company’s product and service offerings have been adversely impacted by a number of long-term economic trends. Digital migration has substantially impacted print production volume, in particular with respect to printed magazines as advertising spending continues to move away from print to electronic media. Catalogs have experienced volume reductions as retailers and direct marketers allocate more of their spending to online advertising and marketing campaigns and some traditional retailers and director marketers go out of business in the face of increased competition from online retailers. The Company saw an unprecedented drop in demand for magazines and catalogs in 2019, with the faster pace of decline in demand primarily due to the accelerating movement from printed platforms to digital Demand for printed educational textbooks within the college market has been adversely impacted by electronic substitution and other trends such as textbook rental programs and free open source e-textbooks. The K-12 educational sector has seen an increased focus on e-textbooks and e-learning programs, but there has been inconsistent adoption of these new technologies across school systems. Consumer demand for e-books in trade and mass market has impacted overall print book volume, although e-book adoption rates have stabilized and industry-wide print book volume has been growing in recent years. Electronic communication and transaction technology has also continued to drive electronic substitution in directory printing, in part driven by cost pressures at key customers and a migration of advertising spend away from print.

On October 30, 2018, the Company entered into an Agreement and Plan of Merger (the 'Merger Agreement'), by and among Quad/Graphics, Inc. ('Quad'), QLC Merger Sub, Inc. and LSC, pursuant to which, subject to the satisfaction or waiver of certain conditions, LSC would be merged with QLC Merger Sub, Inc., and become a wholly-owned subsidiary of Quad.

During the pendency of the merger transaction, LSC was prohibited under the Merger Agreement from implementing certain plant consolidation and footprint optimization steps identified in a comprehensive review of the business….Additionally, customer uncertainty during the pendency of the merger made it difficult to attract new business, and certain customers chose not to renew contracts in part due to the expected merger with Quad. Finally, the Company faced challenges in attracting and retaining employees, who were concerned about how the merger would affect their future employment.

On June 20, 2019, the U.S. Department of Justice ('DOJ') , after a seven month exhaustive review of the merger, filed a civil antitrust lawsuit in Chicago under Section 7 of the Clayton Act seeking to block the proposed merger. The lawsuit was filed after the parties were unable to alleviate the DOJ’s concerns about the competitive effects of the merger, following completion of an expensive and time-consuming Second Request review process, and after intensive efforts to reach a negotiated settlement with the DOJ failed.

On July 22, 2019, after the DOJ sued to block the merger, Quad and LSC entered into a letter agreement, pursuant to which the parties agreed to terminate the Merger Agreement.

Following the termination of the Quad merger and exacerbating ongoing declines in the Magazine and Catalogs segment, the Company experienced a significant decline in book sales in the second half of 2019, with revenues falling by over 20% year-over-year in the fourth quarter of 2019 alone. This decline was largely attributable to higher inventory levels for existing education customers, driven by orders placed late 2018 and early 2019 in anticipation of capacity constraints, as well shifting consumer preferences for higher education course materials and declines in sales of religious volumes. The Book segment, as well as the Magazine and Catalogs segment, was further impacted by a declining market price for paper by-products, which the Company normally sells for resale to Chinese purchasers but has seen a significant decrease in market demand due to the ongoing trade conflict between the United States and China."

The Debtors describe themselves as follows: "With a rich history of industry experience, innovative solutions and service reliability, LSC Communications is a global leader in print and digital media solutions. Our traditional and digital print-related services and office products serve the needs of publishers, merchandisers and retailers around the world. With advanced technology and a consultative approach, our supply chain solutions meet the needs of each business by getting their content into the right hands as efficiently as possible."

LSC was formed on October 1, 2016 when it was spun-off from RRD, as part of a separation of RRD into three separate and independent publicly-traded companies. Prior to its suspension from trading in December 2019, LSC traded on the New York Stock Exchange under the ticker “LKSD.” It now trades on the OTCQX Best Market under the same ticker. 8.The Company has offices, plants and other facilities in 28 states, as well as operations in Mexico, Canada and the United Kingdom. The Company currently has approximately 19,500 total employees worldwide, of which approximately 15,809 employees are located in the United States. 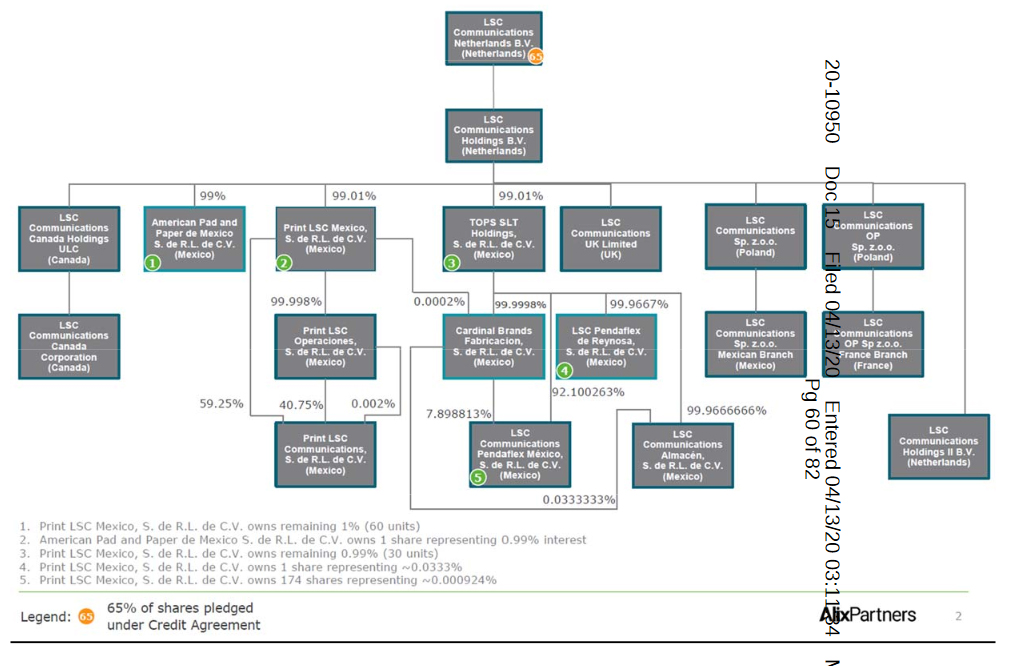