November 17, 2020 – The Court hearing the Lucky Brand Dungarees case confirmed the Debtors' Second Amended Plan of Liquidation [Docket No. 572]. The Plan is attached to the order as Exhibit A.

In addition to filing the Second Amended Plan on November 11, 2020 [Docket No. 540], on the same day the Debtors also filed (i) a memorandum of law in support of Plan confirmation (the "Memorandum") and (ii) a proposed Plan confirmation order [Docket Nos. 541 and 543, respectively].

The Amended Disclosure Statement [Docket No. 452] provides: “On August 14, 2020, the Debtors consummated a sale of substantially all of their assets, pursuant to an Asset Purchase Agreement and Sale Transaction approved by the Bankruptcy Court on August 12, 2020. The credit bid approved as part of the Sale Transaction extinguished the Debtors’ debtor-in-possession financing, as well as a portion of their Second Lien Term Loan Claims. Certain proceeds from the Sale Transaction were used at the closing to pay off the Debtors’ First Lien Lenders. The remaining Net Sale Proceeds of the Sale Transaction were used to fund certain accounts established and maintained by the Debtors, Epiq and Young Conaway Stargatt & Taylor, as well as to fund the payment to the Second Lien Lenders, all in accordance with and to the extent required under the Sale Order. Such accounts included: (i) an account required by the Sale Order for Claims held by certain Texas taxing authorities, (ii) the Professional Fee Escrow Account and (iii) an account to hold estimated stub rent claims and estimated claims entitled to priority under 11 U.S.C. 503(b)(9). The Plan described in this Disclosure Statement provides for the distribution of Net Sale Proceeds remaining as of the Effective Date of the Plan.

On the Effective Date of the Plan, the Debtors shall fund from their Cash on hand, including any remaining Net Sale Proceeds (i) the initial distribution to Class 3 provided under the Plan and, to the extent not already funded, (ii) the Wind Down Reserve in accordance with the Wind Down Budget, attached as Exhibit C hereto, and the Plan Administration Agreement, a form of which will be Filed with the Plan Supplement. The Wind Down Reserve shall vest in the Debtors and their Estates pursuant to Article V.C of the Plan.”

On August 12th, the Court hearing the Lucky Brand Dungarees cases issued an order approving the $198.6mn sale of substantially all the Debtors’ assets to SPARC Group LLC ("SPARC" or the “Buyer”) [Docket No. 349]. An execution version of the July 3, 2020 asset purchase agreement (the “APA”) governing the terms of the sale is attached to the order as Exhibit A.

On August 7th, the Debtors notified the Court that, absent any further qualified bids beyond that of stalking horse SPARC, an auction scheduled for August 10th had been canceled and SPARC designated as the Successful Bidder [Docket No. 302].

The Memorandum notes, “…the Debtors received five (5) formal and seven (7) informal objections to confirmation of the Plan….the Debtors have formally resolved all but three (3) of those objections, and are in negotiations to resolve the balance. The Debtors are cautiously optimistic that the remaining objections [two tax-related and one lease-related] will be resolved by agreement prior to the Confirmation Hearing. In particular, the Debtors have worked with the Office of the United States Trustee for the District of Delaware (the 'U.S. Trustee'), to address certain concerns and…all of the U.S. Trustee’s concerns have been consensually resolved through incorporation into the Plan of certain agreed-upon language. Furthermore, the Plan has the full support of the Committee (as defined below) and the Debtors’ secured lenders.”

On November 4, 2020, the Debtors’ claims agent filed Plain voting results [Docket No. 532], which were as follows:

The Amended Disclosure Statement [Docket No. 452] attached the following documents:

The Debtors filed a Plan Supplement on October 19, 2020 [Docket No. 499], which attached the following documents:

In a declaration in support of the Chapter 11 filing (the “Renzi Declaration”), Mark A Renzi, the Debtors’ Chief Restructuring Officer, detailed the events leading to Lucky Brand's Chapter 11 filing. The Renzi Declaration provides: “Notwithstanding its core operating strengths, the Company has been burdened by its substantial debt load and has faced many of the same pressures affecting U.S. retailers more generally, especially in light of the COVID-19 pandemic. As of the Petition Date, the Debtors’ capital structure includes approximately $181.97 million in funded debt. Prior to the COVID-19 pandemic, the Company had been focused on operational and strategic alternatives aimed at restructuring its retail operations and store profile and extending the Company’s maturity runway while allowing it to service interest payments on its funded debt.

Despite the Company’s best efforts and support of its economic stakeholders, the Company’s restructuring efforts were derailed by a combination of the economic impact of the global COVID-19 pandemic, which resulted in extended closures of its retail stores, and limited liquidity, which diminished access to new inventory from its vendors. The temporary closure of all of the Company’s retail stores in the months of March, April and May, and the disruption to the Debtors’ customer base and supply chain have only exacerbated the Company’s issues related to its substantial funded debt obligations, significant lease obligations, and trade indebtedness. As a result, the Company was forced to explore restructuring alternatives to maximize the value of its business and restructure its debt."

The Renzi Declaration continues: "The Debtors’ operations have generally been profitable during the past thirty years; however, a confluence of factors contributed to the Debtors’ need to commence these Chapter 11 Cases. These factors include the general shift away from brick-and-mortar stores to online channels and the accompanying departure of anchor mall tenants, a highly promotional and competitive retail environment and a shift in customer demand away from apparel to technology and personal experiences. In addition, the COVID-19 pandemic, which has resulted in unprecedented challenges for the retail industry, caused a month-over-month decline in revenues of approximately 50%.

Taken together, these factors have tightened the Debtors’ liquidity, with year-to- date comparable store sales declining over 50% percent and a negative year-end EBITDA of $28 million, and have complicated the Debtors’ relationship with their vendors and suppliers. And, ultimately, the COVID-19 pandemic lead to diminished liquidity as the Debtors faced dwindling cash flows, inaccessible inventory, tightening trade credit, and the inability to access incremental liquidity.”

In addition, as of the Petition date, the Debtors estimate that approximately $79.0mn of merchandise trade debt is due and outstanding.

The Debtors operate exclusively in leased facilities and maintain over 219 real property leases. The Debtors estimate that they will accrue approximately $52.0mn in lease and occupancy related expenses in fiscal year 2020 (approximately $4.3mn). 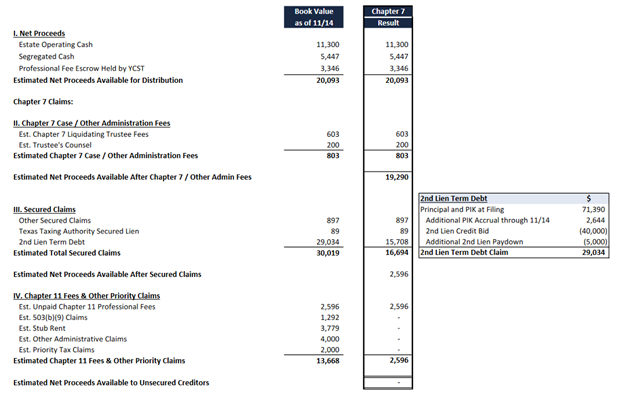 Founded in Los Angeles, California in 1990, Lucky Brand is an apparel lifestyle brand that designs, markets, sells, distributes, and licenses a collection of contemporary premium fashion apparel under the “Lucky Brand” name. The Company’s products, designed for women, men, and children, include denim jeans, pants, woven and knit tops, outerwear, and accessories.

The Renzi Declaration adds: “Lucky Brand is globally recognized for innovative, trendsetting denim jeans and apparel. Lucky Brand sells directly to consumers in the United States in Company-owned Lucky Brand stores, to a network of wholesale accounts that include department stores, selected specialty retailers and boutiques, and through the Company’s e-commerce site, www.luckybrand.com. As of May 2020, the Company operated 112 specialty retail stores and 98 outlet stores in North America. In addition, Lucky Brand selectively provides licenses to third parties to use the Company’s various trademarks in connection with the manufacture and sale of designated products in specified geographical areas for specified periods.”