The Melamed Declaration (defined below) states: "The Company is hopeful that this situation [COVID-19] is temporary, however, and that these bankruptcy proceedings will provide the liquidity to reopen most of our locations and pave the way to a successful sale of the Company’s assets to a buyer consisting of lenders in our current secured lending group, or another strategic or financial buyer that our proposed investment banker will assist us in securing through this process….The Company is hopeful that the post-petition loan we are seeking will provide us with sufficient liquidity to execute the reopening plan, right size the footprint to the more profitable locations, and allow for a ‘free and clear’ bankruptcy sale of the business to a buyer with sufficient funding to operate it post-bankruptcy."

In a declaration in support of the Chapter 11 filing (the “Melamed Declaration”), Lisa Melamed,  the Debtors' interim Chief Executive Officer and President, detailed the events leading to LVI’s Chapter 11 filing. Melamed's candid assessment leaves one wondering what did NOT go wrong and how/why prior management (which ultimately largely jumped ship) could be so strategically shortsighted, time and time again. One fundamental element of the Debtors business model, the acquisition and integration of general ophthalmology practices to leverage synergies and branding, never worked as envisaged. The decision to launch a national cataract surgey brand was not only operationally suspect, it also ran into unforeseen regulatory hurdles. Efforts to divest assets and attract funding all seem to have fizzled in blurry circumstances. A Groupon program failed disastrously, with every single Groupon patient (20-25% of the Debtors' patients) being a money loser. We won't mention the suicide. Of course everything was just turning the corner when COVID-19 hit, depriving these Debtors of "a very strong year" at least based on $2.9mn of PF EBITDA through February. Perhaps that is seeing things through slightly rose tinted glasses in respect of Debtors who are more than $1.6mn behind on sales and use taxes, owe $22.0mn as to leased laser equipment (and to other trade creditors) and can't service their $160.0mn of senior debt. Still, always useful to look on the bright side (and bashing the blindness of old management) when embarking on an asset sale process.

During the 2015-2017 timeframe, the Company invested in piloting a national cataract surgery brand ‘Cataract Vision Institute’ and simultaneously began an expansion of its LVI footprint into numerous smaller markets. The new cataract brand brought unanticipated regulatory and operational challenges, and the proof of concept was not realized. As a result, the new brand ceased operations in 2018. Meanwhile, the LVI expansion strategy proved problematic as the centers struggled to perform in the smaller markets, and the Company subsequently began closing some of these locations in 2018 and 2019.

In 2018, the Company amended its credit agreement with LBC, and experienced departure of many of its senior executive team members, including a longstanding CEO, and CFO, CMO and several other senior executives. Beginning in June of 2018, extensive due diligence began for the proposed sale of Audax’s interest in the Company to their minority Canadian investors.

The change in ownership dragged on for several months, and the parties did not close the transaction until March of 2019. At that time, due to prior liquidity issues, and a downward turn of the industry, substantial capital was needed, however the promised capital was never delivered post the March 2019 investment by 959 Canada.

Moreover, one of the key marketing strategies utilized for years prior to 2020 by the LVI brand was the implementation of Groupon as a primary lead channel. Prior management believed the more eyes, irrespective of discount, would sustain overhead. Unfortunately, Groupon cost the Debtors significantly as they lost money on each Groupon patient, which comprised of a significant percentage of the LVI patient population (~20-25%).

At the very end of 2018, a well-known meteorologist committed suicide post a SMILE procedure. Although SMILE is not a procedure offered by the Company, the nationally run story negatively impacted the entire refractive market and sparked an industry-wide downturn of approx. 8% that impacted all of 2019. As the Company is the leader in the refractive space, the industry downward turn had a deeper impact on the Company resulting in 15% fewer procedures and 14% lower revenues in 2019 vs. 2018. In addition, the Groupon percentage of LVI procedures grew to nearly 35%, causing a detrimental impact on profitability.

While 2019 was a devastating year for the refractive industry generally, and specifically for the Debtors, 2020 was off to a good start pre-COVID. Among other marketing and operating initiatives, the Groupon program was modified to keep profit levels on those eyes consistent with the other lead channels. Even though February’s total volumes were down 3%, the Company’s management team drove several improved pricing initiatives resulting in increased revenues by 7% YOY. We are confident that, had the Company not shut down from the COVID pandemic, it would have had a very strong year as evidenced by the $2.9M of PF EBITDA through February.

Of course, COVID-19 changed all of that, which brings us to the need for Chapter 11."

According to the Debtors: “Vision Group Holdings, based in West Palm Beach, Florida oversees and manages two of the leading LASIK surgery providers in the world: The LASIK Vision Institute and TLC Laser Eye Centers. Between our brands, the company has performed over 3.2 million LASIK eye procedures. We serve multiple markets in the United States and Canada, making it extremely convenient for our patients to find a location that is both nearby and well suited to their specific needs.”

The Melamed Declaration adds: "LVI Intermediate serves as the corporate level management company for the entire enterprise. As such, LVI Intermediate employs the Company’s administrative and corporate employees, including, executive roles, accounting and finance, human resources, IT support, legal and risk, warehouse personnel, and customer call center personnel. LVI Intermediate’s operating subsidiaries also have their own personnel, who are primarily in customer facing or operational roles associated with their respective businesses. The Debtors’ business model is, generally, to provide turn-key management and administrative support services to physicians and/or their medical practices. Neither LVI Intermediate nor any of its Debtor subsidiaries practice medicine or otherwise provide any medical services to patients."

The Debtors current corporate structure is the result of a March 2019 transaction (the “March 2019 Ownership Transaction”) in which 9597930 Canada, Inc. (“959Canada”), a Canadian corporation indirectly owned and controlled by Mark Cohen, M.D. and Avi Wallerstein, M.D., purchased a majority ownership position in LVI Super Intermediate Holdings, Inc. (“LVI Super”) from Audax Private Equity Fund IV, L.P (“Audax”), the Company’s then majority owner. As part of that transaction, Falcon Strategic Partners IV, LP (“Falcon”) and Macquarie Sierra Investment Holdings, Inc. (“Macquarie”) obtained minority equity positions in LVI Super. Through a series of interrelated transactions, LVI Super, a non-Debtor, became the ultimate parent holdings company of the Debtors and their affiliates. As of the Petition date, 959 Canada owns 84% and Falcon and Macquarie each own 8% of LVI Super. LVI Super owns 100% of LVI Hold Co., LLC (“LVI Holdco”), a non-Debtor intermediate holdings company, which owns 100% of Debtor LVI Intermediate. LVI Intermediate either directly or indirectly owns 100% of the equity interests of all the Debtors and 100% or a majority interest in non-Debtor affiliates. 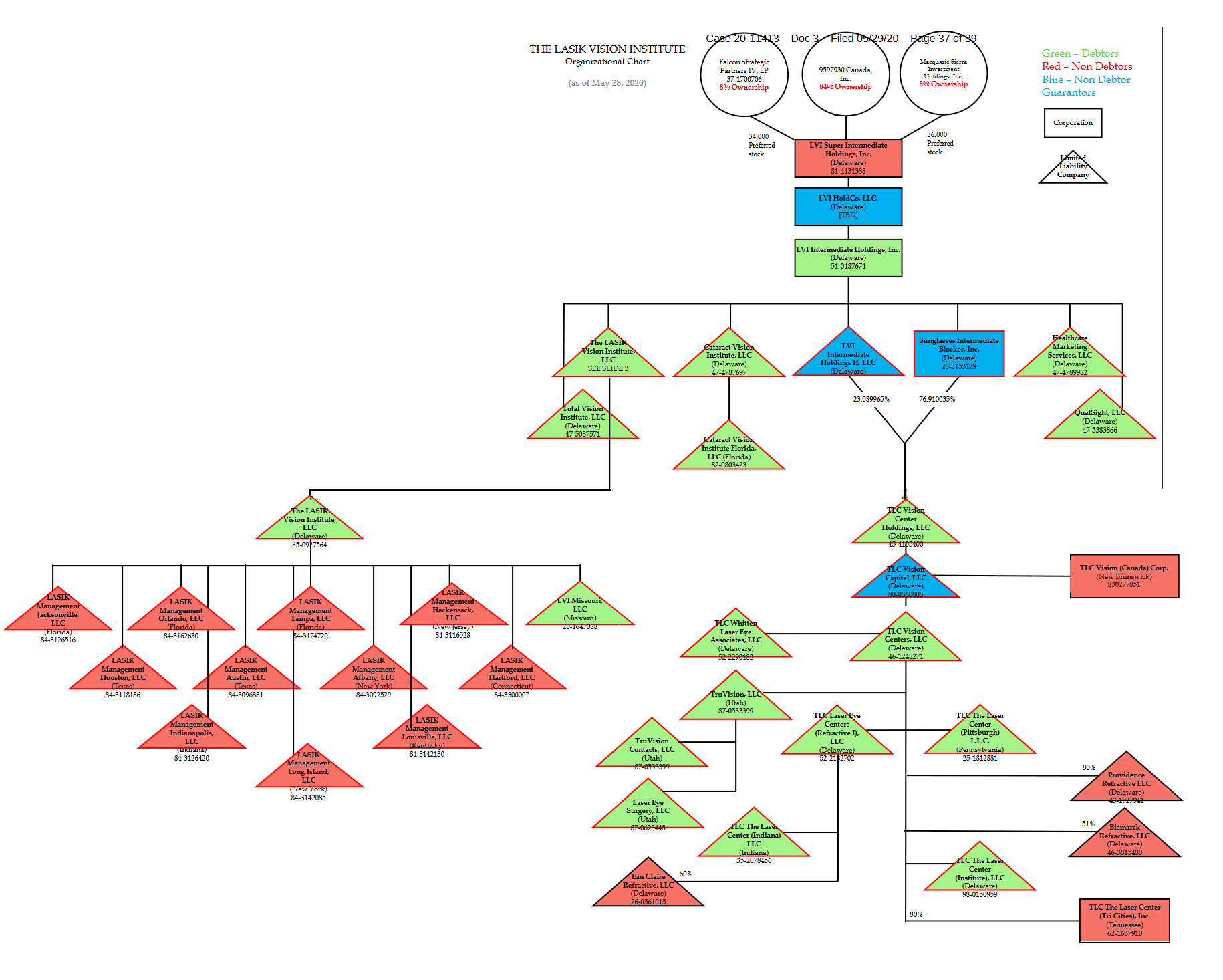