November 10, 2022 – The Court hearing the Madison Square Boys & Girls Club case issued an order authorizing the Debtor to access $11.0mn in alternative debtor-in-possession (“DIP”) financing being provided by Carver Federal Savings Bank ("Carver" or the “DIP Lender”) [Docket No. 283], with the proceeds to be used in the first instance to repay outstandings under the Debtor's initial DIP financing arrangements with SummitBridge National Investments VIII LLC ("Summit") and to pay Summit a $50k reak-up fee and up to $150k "Expense Reimbursement." The DIP credit agreement is attached as Exhibit A to this order.

In requesting the replacement financing from Carver (as noted below, the Debtor's first choice from the outset, but set aside in favor of Summit due to "unacceptable execution risk"), the Debtor notes that the Carver DIP is "on terms materially more favorable than the Summit DIP Facility…including an option to convert the Carver DIP Facility into an exit financing term loan facility, and with limited closing conditions," with those terms compared in the below table: 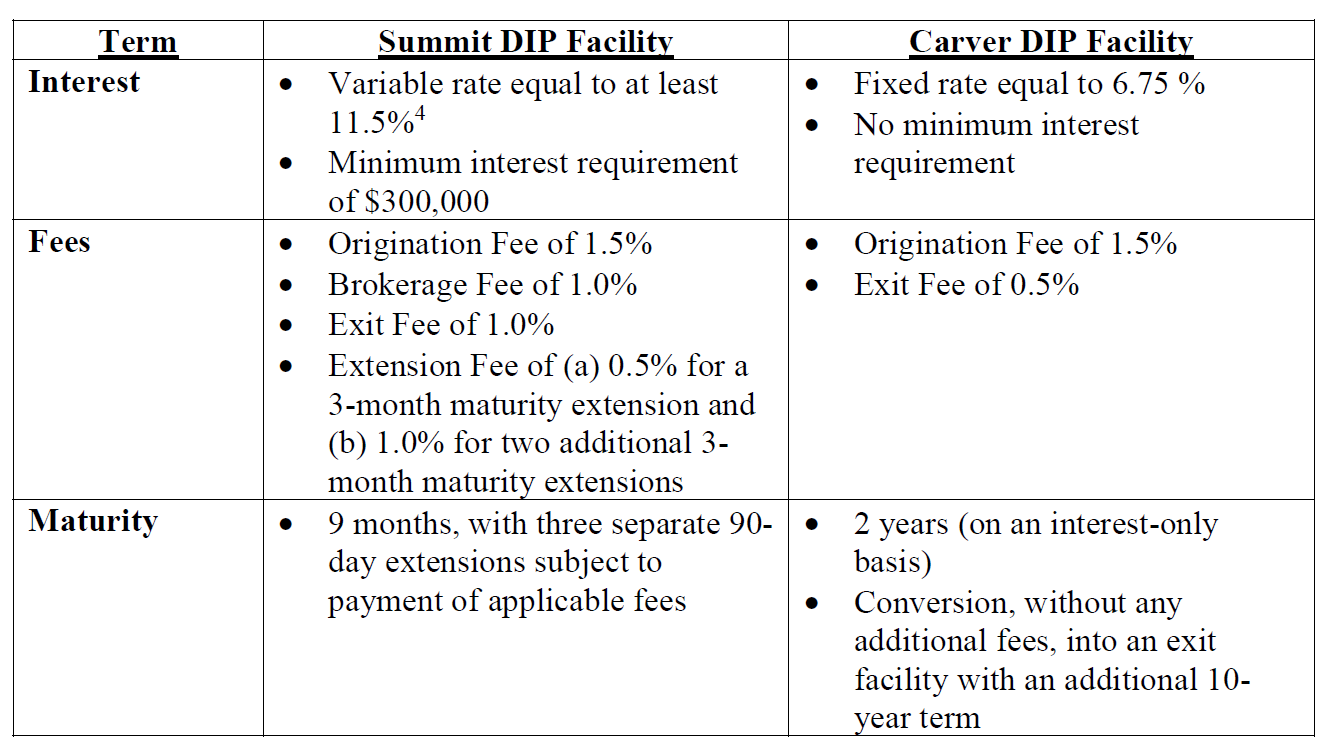 In a declaration filed by the Debtor's investment banker [Docket No. 269], the Debtor provides: "On September 15, 2022, the Debtor filed the Motion seeking authority to enter into a senior secured debtor-in-possession credit facility (the 'Summit DIP Facility') in an aggregate principal amount equal to $11 million with SummitBridge National Investments VIII LLC, as lender ('Summit'). At the time the Motion was filed, the Debtor had been in negotiations with Carver Federal Savings Bank (referred to in the Motion as the 'Alternative Lender' and hereinafter referred to as 'Carve'”) with respect to debtor-in-possession financing on more favorable economic terms, but the Debtor believed the various due diligence and other conditions in the Carver commitment letter posed unacceptable execution risk. Consequently, the Debtor determined that proceeding with the Summit DIP Facility was the best available option under the circumstances, because Summit’s commitment provided the Debtor with certainty that it had the financing necessary to continue its Chapter 11 case.

Summit agreed that the Debtor could subsequently pivot to an alternative financing arrangement if one should emerge but conditioned that right on payment of a $50,000 break-up fee (the 'Break-Up Fee') and the reimbursement of Summit’s fees and expenses (the 'Expense Reimbursement') [$150k], less the Deposit….Subsequent to filing the DIP Motion, the Debtor was able to reach an agreement with Carver and obtain a commitment for a debtor-in-possession facility (the 'Carver DIP Facility') for the same principal amount as the Summit DIP Facility, but on terms materially more favorable to the Debtor, including an option to convert the Carver DIP Facility into an exit financing term loan facility, and with limited closing conditions."

On September 15, 2022, the Debtor requested Court authority to access $11.0mn in debtor-in-possession (“DIP”) Financing from SummitBridge National Investments VIII LLC (the “DIP Lender”) [Docket No. 200]. The DIP term sheet is attached to the motion as Exhibit B.

The motion [Docket No. 200] states, “Prior to commencing this Chapter 11 Case, the Debtor engaged in extensive, good-faith negotiations with certain key stakeholders with the objective of achieving consensus on a resolution of the Abuse Claims. When it became clear that the Debtor’s liquidity was insufficient to enable it to continue its efforts out of court, the Debtor sought chapter 11 relief to reach consensus through an orderly in-court mediation process that would bring key parties to the table to facilitate a fair, equitable, and efficient resolution of the Abuse Claims, and enable the Debtor to continue its charitable mission.

The Debtor has made progress in a short amount of time, most of which was accomplished on a consensual basis with several of the key stakeholders; however, as previewed at the outset of the Chapter 11 Case, the Debtor’s limited unrestricted assets have continued to dwindle and are nearly exhausted. The Debtor therefore requires access to additional liquidity to continue the mediation and restructuring process." 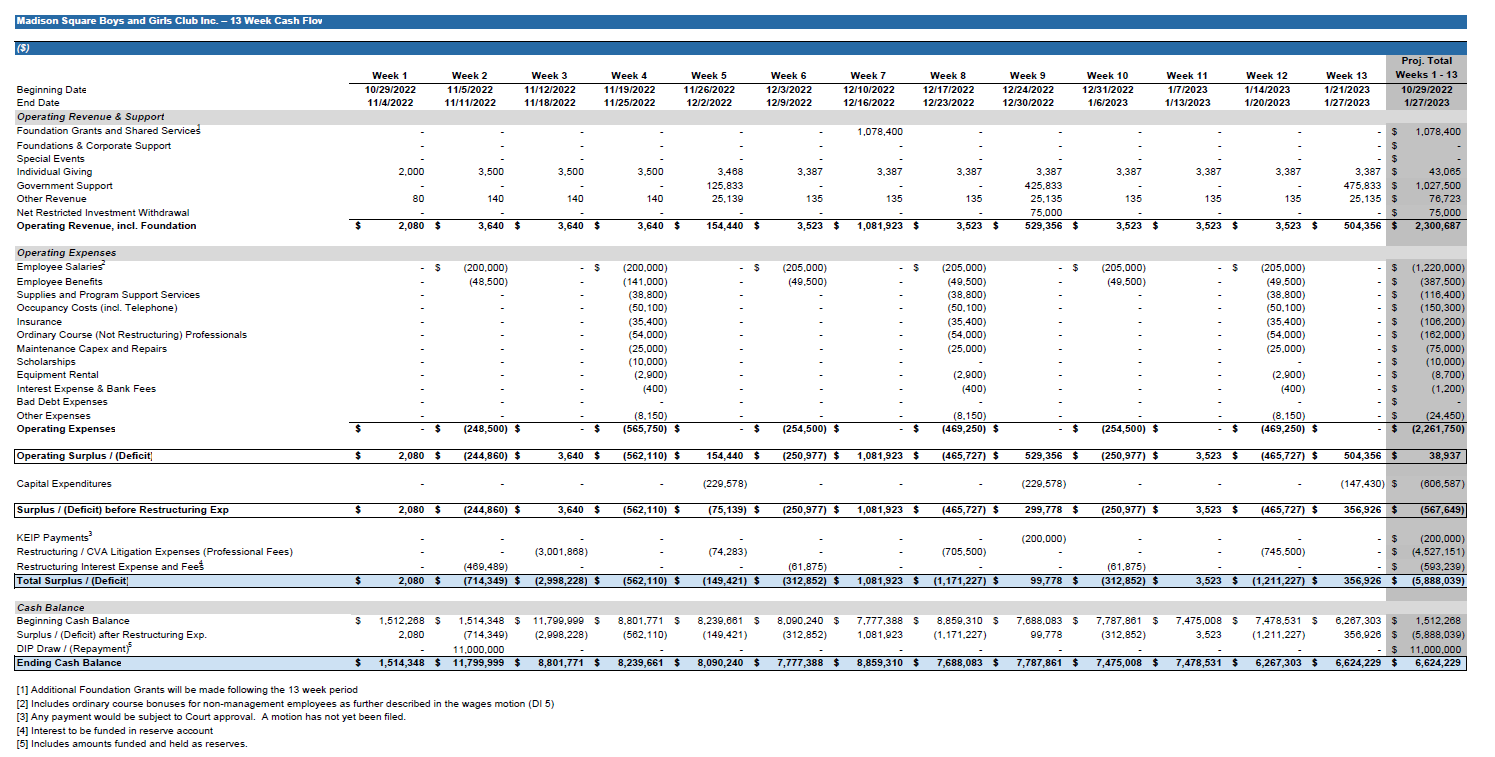 According to the Debtor: “Since 1884, Madison Square Boys & Girls Club has provided a safe, stable, supportive environment for youth in some of New York City’s most under-served neighborhoods."

Crestlloyd, LLC – Developer of Los Angeles Mega-Mansion “The One” Seeks $12mn of DIP Financing to See it Through Sale Process

Voyager Digital Holdings, Inc. – Crypto-Currency Brokerage Files Chapter 11 with Over 100,000 Creditors, Cites “Prolonged Volatility and Contagion in Crypto Markets” and Collapse of Three Arrows Capital (in Respect of Which its Alleges $650mn in Claims)