September 23, 2022 – The Court hearing the Makeup Liquidating Holdings cases issued an order dismissing the Debtors’ Chapter 11 cases [Docket No. 415]. this final order follows a July 5th interim dismissal order [Docket No. 367] which effectively put the dismissal process on rails pending the Court's receeipt of a certification of counsel stating that requisite clean-up procedures (mostly payment of fees) had been completed.

On January 15, 2022, BHCosmetics Holdings, LLC and three affiliated debtors (dba BH Cosmetics and together “BHCosmetics” or the “Debtors”) filed for Chapter 11 protection with the U.S. Bankruptcy Court in the District of Delaware, lead case number 22-10050 (Judge J. Kate Stickles). At filing, the Debtors, a direct-to-consumer color cosmetics brand focused on the Millennial/Generation Z consumer (NB: BH stands for “badass with heart”) noted estimated assets between $50.0mn and $100.0mn; and estimated liabilities between $50.0mn and $100.0mn. As discussed further below, the Debtors ascribed their descent into bankruptcy on the impact of COVID-19 pandemic (consumers using less of make-up while at home) and underwhelming results in respect of product lines pushed by celebrity influencers, Doja Cat and Iggy Azalea.

The dismissal motion [Docket No. 326] states, “The Debtors filed these Chapter 11 Cases to effectuate a sale of substantially all of their assets, including their inventory and intellectual property, thereby maximizing recoveries for the Debtors’ estates. On February 24, 2022, the Debtors successfully consummated the sale of their intellectual property, related tangible assets and contracts, and certain inventory to the Purchaser (the ‘Sale’) in exchange for approximately $3.9 million. Now that the Sale has closed, the Debtors’ Prepetition Loan Lenders have consented to the use of their cash collateral to fund a reserve to pay costs and expenses of an orderly wind-down process (the ‘Wind-Down Reserve’), as well as the use of cash collateral to satisfy certain administrative expenses, all as set forth in, in accordance with, and as limited by the Final Cash Collateral Budget.

As a result of the Purchaser’s payment and assumption of certain liabilities, along with the Prepetition Loan Lenders’ consent to the funding and use of the WindDown Reserve and use of cash collateral as provided for in that certain Final Order (I) Authorizing Use of Cash Collateral and Affording Adequate Protection; (II) Modifying Automatic Stay; and (III) Scheduling a Final Hearing [Docket No. 217], as may be amended, to satisfy ongoing administrative liabilities in accordance with the Final Cash Collateral Budget, the Debtors believe that, as of the dismissal of these Chapter 11 Cases, all known, valid administrative expense claims (other than professional fee claims) will have been paid. The estates do not and will not have funds available to make a distribution to holders of general unsecured claims, however.

Although the Debtors have explored alternative options to bring these Chapter 11 Cases to a conclusion, the Debtors believe that dismissal is the most expeditious and cost-effective mechanism to wind down these Chapter 11 Cases. In reaching this conclusion, the Debtors consulted with counsel to the Prepetition Loan Lenders and the Committee, and, because all of the Debtors’ cash constitutes encumbered ‘cash collateral,’ determined that dismissal would not negatively impact creditors (vis-à-vis conversion to chapter 7) because there are no remaining assets of any value available for distribution to unsecured creditors or to support the administrative costs of pursuing anything other than the prompt exit from bankruptcy. Moreover, a conversion to chapter 7 would not serve a purpose if there is no unencumbered cash to administer the chapter 7 cases.”

On February 18, 2022, further to a January 28th bidding procedures order [Docket No. 90] and a February 18th sale hearing, the Court hearing the BH Cosmetics cases issued an order approving the $4.3mn sale of a majority of the Debtors’ intellectual property and inventory to RBI Acquisition Holdings, LLC (the “Purchaser,” an affiliate of the UK's Revolution Beauty Group, press release here) [Docket No. 182]. The sale closed on February 24, 2022 and the Purchaser’s January 14, 2022 APA is attached to the sale order at Exhibit A.

In February 2022, when speculating (as it turned out, correctly) as to te identity of the purchaser, we wrote "The Debtors' embarked on a section 363 sale process of IP assets after prepetition efforts failed to generate interest in a more comprehensive, going concern, sale (as described further below). RBI appears to be an acquisition vehicle created by the UK's Zeus Capital (or more likely, on behalf of a Zeus client). The RBI APA (see Docket No. 15) lists Zeus' Jordan Warburton as the contact person for RBI at Zeus' Manchester, UK address.

In July 2021 Zeus acted as Nominated Adviser and Sole Broker to Revolution Beauty Group plc's ("Revolution") £300.0mn AIM IPO and in November 2021 Zeus acted as Financial Adviser to Revolution in connection with Revolution's £23.0 million acquisition of Medichem Manufacturing Ltd (“Medichem”), a British manufacturer of hair and beauty products (with Warburton acting on that transaction for Zeus). Revolution's cosmetic products competes in  the same "vegan free," "cruelty free," millennial market as the Debtors; and Medichem was Revolution's "first acquisition and provides the Group with its own, fully-owned and vertically integrated manufacturing business." Clearly a decent chance that the Debtors will constitute Revolution's second acquisition."

On April 28, 2022, the Court hearing the BH Cosmetics cases issued an order amending the Debtors’ case captions [Docket No. 289].

Consistent with the obligations under the APA, the Debtors have changed their names as follows:

The Ware Declaration [Docket No. provides: "After considering all viable restructuring options and taking the steps identified herein to address operational and liquidity challenges prior to the Petition Date, [the Debtors] believe that the Sale Process represents the best means through which to maximize value for the estates and all interested parties."

The Ware Declaration provides: "The Debtors operate in an extremely competitive retail environment, facing competition from other specialty-retail cosmetic companies [eg Revolution]. Due to increased competition, the Debtors have faced significant pressure to maintain market share, which has directly and negatively  affected their profitability. The Debtors have also struggled to obtain profitability after pursuing an ultimately unsuccessful launch of various product lines, and following a significant capital investment in infrastructure and other overhead.

During 2020… as a consequence of the COVID-19 pandemic, sales in the cosmetics industry declined as consumers’ daily routines, and the reasons for wearing cosmetics, changed, which impacted the sub-sector of color cosmetics within which the Company primarily operates even more than many other segments of the cosmetics industry. In 2020, the Company’s revenue dropped from $55.8 million in 2019 to $33.6 million. Throughout 2021, the Company continued to see an extremely competitive cosmetics market, which resulted in lower than expected sales compounded by high acquisition costs. As a result of liquidity constraints, the Company delayed the launch of Itsa [a new line of natural skincare products] to conserve cash for the launch of products developed in association with the newly signed celebrity influencers, Doja Cat and Iggy Azalea (the “Celebrity Influencer Product Lines”)….After the first launch of the Celebrity Influencer Product Lines fell below expectations, the Debtors’ Board directed the New Management Team to retain Riveron Consulting, LLC (“Riveron”) as turnaround advisors to assist the Debtors in managing their cash, explore all viable restructuring alternatives, and structure the Debtors’ go-forward strategy. 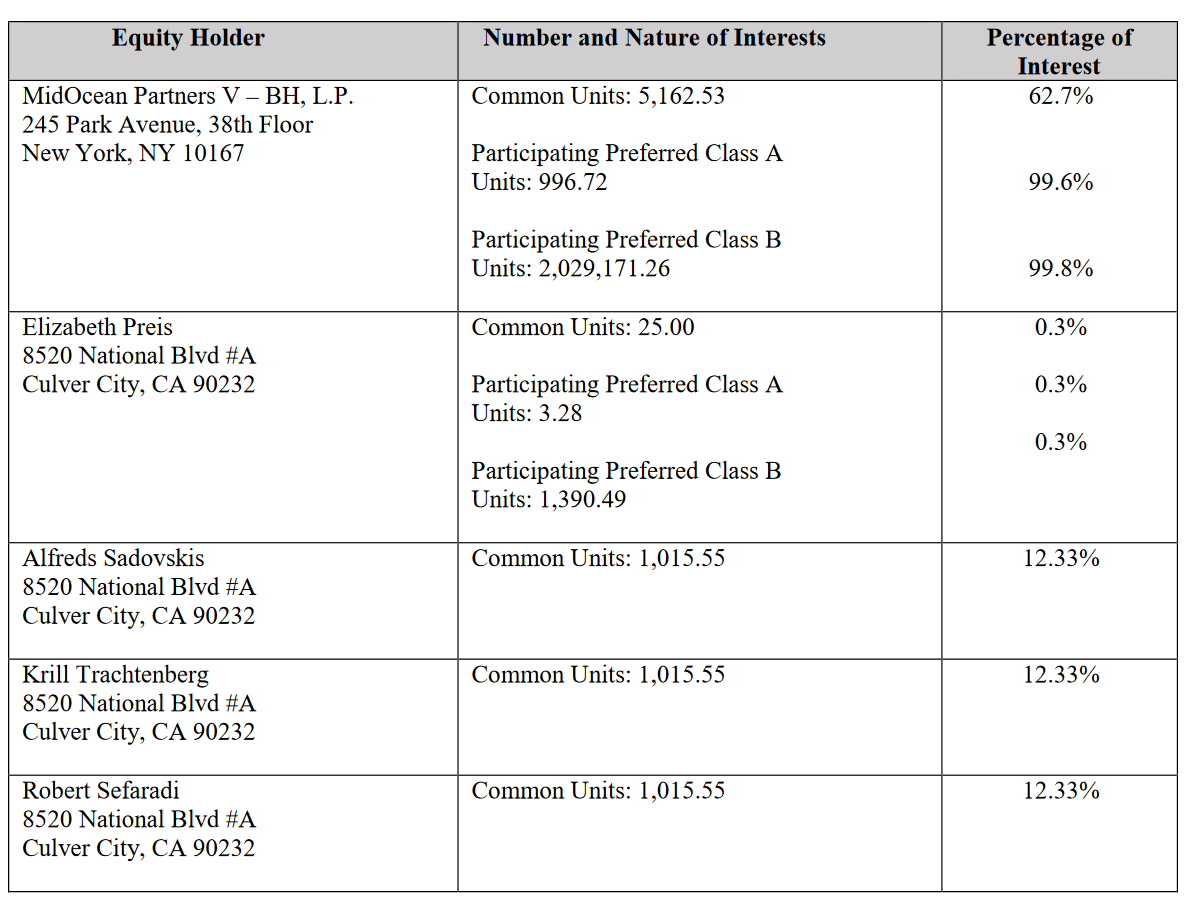 At filing, the Debtors were majority owned by mid-market private equity house MidOcean Partners ("MidOcean") which acquired its interest in January 2018 from BH Bonfire (terms were not made public).

In 2021, the Debtors continued to struggle in a highly competitive, COVID-stricken market with matters made worse as liquidity issues piled up.

In detailing their descent into bankruptcy, the Debtors cited expensive and under-performing product lines in a highly competitive sector, the dramatic impact of COVID on cosmetic use (impacting the entire cosmetics sector [who needs lipstick under a mask while working from home?], but particularly impacting the Debtors who compete in the "color cosmetics" sub-sector), and the inability of celebrity influencers Doja Cat and Iggy Azalea to help the Debtors pull out of their revenue nosedive with new "Celebrity Influencer Product Lines." The emphasis on those two celebrity lines, given tightening liquidity, had the additional knock-on effect of delaying the launch of the Debtors' earlier planned "Itsa" product line.

According to the Debtors: “BH: Badass with Heart. We bring the best in cruelty free cosmetics that always break convention. We believe makeup shouldn’t be that complicated – experiment, enjoy and be kind to your wallet and planet while doing it. Our products are colorful and FUN – with no shortcuts.We are genuine, raw and stand fiercely for our core values. Show off your unique self, make an impact and stand out from the crowd – one look at a time."

The Ware Declaration adds: "Originally launched in 2009, the Debtors are a leading beauty brand specializing in high quality, clean, vegan, and cruelty-free cosmetics and other beauty products, with a specialty in color cosmetics, brushes for the application of cosmetics, and eyelashes. The Debtors sell their products on their e-commerce platform directly to consumers utilizing, among others, Shopify and Netsuite ERP, and wholesale to various retailers.

The Company’s operations are based in the Los Angeles, California area. Since early 2020, the Company’s headquarters has been located in Culver City, California.

As of the Petition Date, the Debtors employed, in the aggregate, approximately 28 employees, all of whom work on a full-time basis. This reflects the reduction in
force conducted by the Debtors prior to the commencement of these Chapter 11 Cases. The Debtors’ employees are not covered by a collective bargaining agreement. 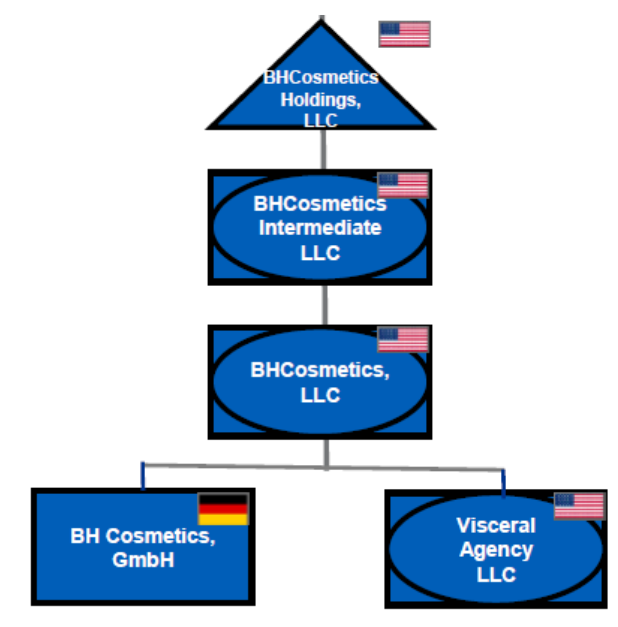