Simon Appell of AlixPartners UK LLP and John C. McKeffia of Finance & Risk Services Ltd. have been appointed as Joint Provisional Liquidators (the "JPLs") in the Provisional Liquidation Proceedings currently pending before the Supreme Court of Bermuda.

Goals of the Chapter 15 Filing

Importantly, the appointment of the JPLs will provide protection for each Debtor and its assets from the claims of unsecured creditors, including litigation claimants, by imposing an automatic stay on all actions in Bermuda during the pendency of the Provisional Liquidation Proceedings in order to facilitate implementation of the Restructuring."

Events Leading to the Chapter 15 Filing

"Losses in 2017 and 2018. In 2017 and 2018, the catastrophic risk reinsurance business of the CATCo Group was hit by historically large losses due to a number of large windstorms and forest fires. Consequently, investors in the Markel CATCo business suffered material losses on their investments.

Run-Off. Following a second year of losses in 2018, the Manager [Debtor Markel CATCo Investment Management Ltd.] extended a special redemption option to investors of the Public Fund and the Private Fund and, in view of the majority uptake, decided to cease offering new investment in the Funds. Accordingly, at the end of the 2019 policy year, all remaining capital in the Funds, other than that trapped as collateral for insurance policies, was returned to investors.

Subsequently, on March 26, 2019, investors in the Public Fund voted to approve the orderly run-off of its investments in the Master Fund operated by the Private Fund. On July 25, 2019, the Manager announced that the Private Fund would cease accepting new investments and would not write any new business going forward through the Reinsurer. Following the Manager’s announcement in July 2019, the Manager commenced the orderly run-off of the Reinsurer’s existing portfolio.

The Manager has since continued to manage the retro and reinsurance portfolios, in order to run-off the policies in an orderly manner and, subject to approval from the BMA, return capital to investors as it is released from the Trust Accounts to the Reinsurer. The run-off has progressed smoothly since the Funds stopped accepting new subscriptions, with a total of approximately $2.3 billion released and returned to investors as of August 2021. The Manager expects the run-off to be completed by January 2023.

In another relatively recent and highly significant development, prior to the public announcement of the Buy-Out Transaction (as defined below), two small investors in sub-funds operated by the Private Fund asserted and threatened claims, respectively, seeking to recover losses incurred on their investments in 2017 and 2018 (as described further below). A third investor has also recently threatened similar claims. Namely, in October 2020, one of these investors filed a claim in the United States against the former chief executive officer of the Manager, Anthony Belisle. In June 2021, a settlement was reached with respect to this claim.

Although the Manager was ultimately not named in this litigation, due to the indemnification obligations asserted by Mr. Belisle against the Manager as a former employee, the Manager facilitated the settlement from available insurance coverage after it and the Private Fund determined that it would be in the best interests of all investors to avoid what might become significant litigation defense costs that could exceed the claimed damages and have a detrimental impact on investor returns. The other investors have threatened, although not formally commenced, similar claims, and while the Manager and the Private Fund think these claims are unfounded, they remain unresolved.

As publicly disclosed, late in the fourth quarter of 2018, Markel Corporation received inquiries from the U.S. Department of Justice (the 'DOJ'), the U.S. Securities and Exchange Commission (the 'SEC') and the BMA into loss reserves recorded in late 2017 and early 2018 at the Reinsurer. Notably, in response to these requests, Markel Corporation engaged Skadden, Arps, Slate, Meagher & Flom LLP ('Skadden') to undertake a thorough review of the loss reserving process for catastrophic events that occurred in 2017 and reserve-related disclosures that the CATCo Group made.

Without waiving any privilege attaching to the internal review, the Debtors note that such review was completed in April 2019 and Skadden found no evidence that CATCo Group personnel acted in bad faith in exercising their business judgment in the setting of reserves and making related disclosures during late 2017 and early 2018. This supports the Debtors’ conclusion that any potential investor claims, brought on the basis of the CATCo Group’s loss reserving process, would not be meritorious.

While the Manager strenuously denies any liability with respect to these claims, and the Debtors do not believe that such claims would ultimately be meritorious, there is a risk that other investors could seek to assert 'copycat' claims against the Manager or persons who are entitled to indemnification from the Manager (such as its officers, directors or employees). In the event such further investor claims were to be asserted, the Manager would incur significant defense costs, along with any costs of settlements or payments of adverse judgments, resulting from such claims against the Manager or its officers, directors or employees, and the Manager would be entitled to indemnification from the Public Fund, the Private Fund and the Reinsurer of such costs and payments.

Importantly, under Bermuda law, such investor claims (if successful) may, and associated indemnification obligations will, legally rank ahead of, and have priority of payment over, the interests of investors due to the investors holding equity interests. This could result in an inequitable distribution of fund assets, as investors who have asserted claims could be paid ahead of all other investors. Any claim and indemnification payments in excess of the limited available insurance coverage will directly decrease assets of all funds that would otherwise be available for distribution to all investors.

Furthermore, the costs associated with such claims (if they were to be asserted), whether or not they are ultimately meritorious, would materially impair the ability of the Debtors to continue to return capital to investors as it becomes available for distribution. Consequently, any further distributions to investors are unlikely to be made until the risk of future investor claims being asserted against the CATCo Group is resolved.

The Buy-Out Transaction and the Bermuda Proceedings

The Buy-Out Transaction. In order to: (a) resolve the uncertainty around further investor litigation; (b) ensure that all investors are treated alike and none gain an unfair advantage through litigation; and (c) facilitate the expeditious return of funds to investors, Markel Corporation has decided to make a buy-out transaction available to the Private Fund and the Public Fund (the 'Buy-Out Transaction' and the implementation of such Buy-Out Transaction, the 'Restructuring').

Markel Corporation will provide funding to facilitate the Buy-Out Transaction and bear substantially all the down-side risk from any future reserve strengthening at the Reinsurer.

On September 27, 2021, the Debtors filed the Provisional Liquidation Proceedings and the Manager publicly announced the Buy-Out Transaction to be proposed under the two Schemes. Following the public announcement of the Buy-Out Transaction, investors in both the Private Fund and the Public Fund are being given several weeks in which to provide an undertaking to support the Buy-Out Transaction and relevant Scheme, and in doing so become eligible to receive an early consent fee. During this period, the Debtors will engage with investors in the Public Fund and the Private Fund to obtain their support. The Debtors will also consult with the JPLs in relation to the Schemes, before proceeding to launch them.

Based on preliminary discussions held with investors to date, the Debtors expect that investors in the Public Fund and the Private Fund are likely to support the Buy-Out Transaction and agree to approve the Schemes. However, if sufficient investors do not agree to support the Schemes, the Private Fund and the Public Fund will need to determine the appropriate course of action, which could include proceeding to enter into full liquidation….

The following entities own, directly or indirectly, 10% or more of the equity interests in Markel CATCo Reinsurance Fund Ltd. as of April 1, 2021:

The following entities own, directly or indirectly, 10% or more of the equity interests in CATCo Reinsurance Opportunities Fund Ltd. as of June 30, 2021:

The following entities own, directly or indirectly, 10% or more of the equity interests in Markel CATCo Investment Management Ltd:

The following entities own, directly or indirectly, 10% or more of the equity interests in Markel CATCo Re Ltd.:

According to the Debtors: “Markel CATCo creates and manages a series of innovative insurance-linked investment funds which provide its investors the opportunity to participate in a selected mix of catastrophe reinsurance risks accessed through its reinsurance company, MCRe. The funds are diversified across a number of risk categories to limit the capital exposed to a single event, and are uncorrelated to traditional asset classes. The structure of the funds provides its reinsurance purchasers significant underwriting capacity and claims paying capabilities.

Markel CATCo is headquartered in Hamilton, Bermuda and is authorized and regulated by the Bermuda Monetary Authority." 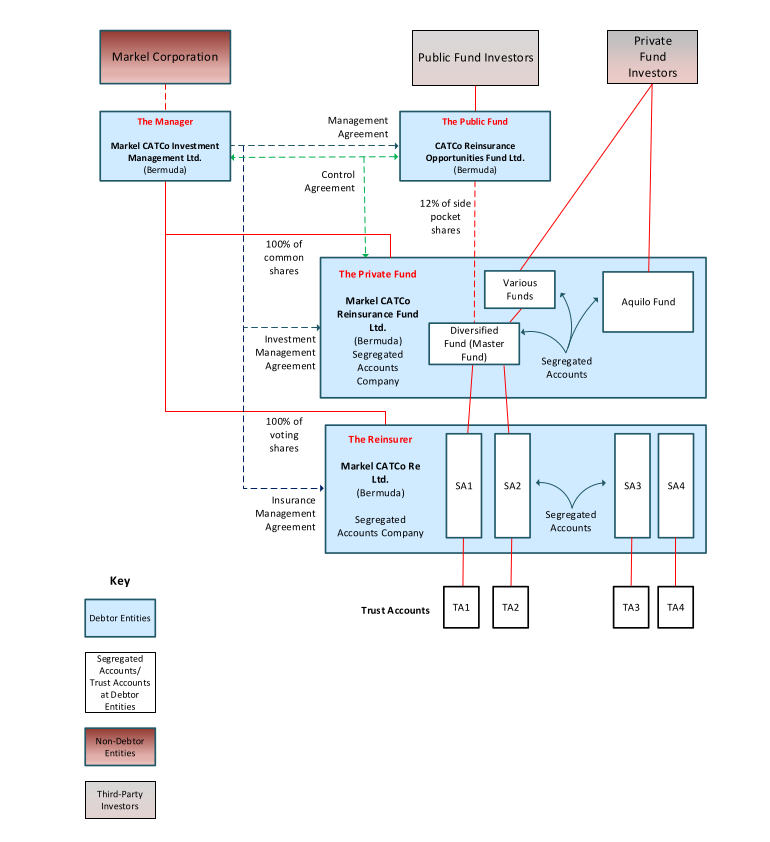