On October 12, 2020, MD America Energy, LLC and five affiliated Debtors (“MD America” or the “Debtors”) filed for Chapter 11 protection with the U.S. Bankruptcy Court in the Southern District of Texas, lead case number 20-34966. At filing, the Debtors, a Texas-based oil and gas operating company operating principally in the Woodbine formation, noted estimated assets between $50.0mn and $100.0mn; and estimated liabilities between $100.0mn and $500.0mn. In a subsequently filed Schedule A/B, the lead Debtor noted $529.0mn of assets and $134.9mn of liabilities [Docket No. 101].

In a press release announcing the emergence, the Debtors stated: “Under the Plan, the Company’s pre-petition secured lenders have converted a significant portion of their debt into new equity in the Company, allowing MD America to emerge from the Chapter 11 process with a robust balance sheet and with a solid foundation for future growth and success.”

Deadlines of February 5, 2021 and January 25, 2021 have been set for administrative claims and professional fee claims, respectively.

The Debtors' memorandum of law in support of the Plan confirmation [Docket No. 232] notes, “The Debtors commenced the chapter 11 cases (the ‘Chapter 11 Cases’) to implement a restructuring through their prepackaged Plan. The Plan reduces the Debtors’ prepetition debt by approximately $58 million, deleverages their balance sheet and allows the Debtors to emerge from the Chapter 11 Cases as a going concern. The Plan has the support of 100% of the Debtors’ secured debt holders (the ‘Consenting Term Loan Lenders’), who are overwhelmingly the largest creditor group. Prior to filing bankruptcy, the Consenting Term Loan Lenders and the Debtors entered into a restructuring support agreement with respect to these Chapter 11 Cases (the ‘Restructuring Support Agreement’).

Pursuant to the Plan negotiated with the Consenting Term Loan Lenders, the claims of the Consenting Term Loan Lenders are impaired under the Plan and will be exchanged for a pro rata share of (i) the New First Lien Term Loan in the amount of $60 million and (ii) 100% of the equity in the Acquired Entity. The Plan leaves all known unsecured creditors unimpaired. In addition, the Debtors have an outstanding loan under the Paycheck Protection Program in the principal amount of $1,163,893, which will be unimpaired by the Plan, but for which the Debtors have applied for forgiveness and their lender has indicated it will recommend to the Small Business Administration that the entire amount of the loan should be forgiven. All of the Holders of Class 4 (Prepetition Term Loan Claims), the only class entitled to vote on the Plan, voted to accept the Plan.

The only significant opposition in these Chapter 11 cases has come from: MeiDu America, Inc., the parent company of the Debtors (‘MeiDu’), C. Eric Waller, the former Chief Executive Officer of MD America (‘Waller’), and Waller Family Heirs, LLC (‘WFH’), an entity wholly-owned by Waller…MeiDu’s Complaint seeking to dismiss the Chapter 11 Cases was dismissed with prejudice in the MeiDu Adversary Proceeding, and MeiDu did not object to confirmation. In addition, the Debtors, Waller and WFH have reached a global settlement of all claims and objections raised by Waller and WFH in these Chapter 11 Cases” (see more on MeiDu Adversary Proceeding and Waller objection below).

The following is an amended summary of classes, claims, voting rights and expected recoveries (defined terms are as defined in the Plan and/or Disclosure Statement, see also the Liquidation Analysis and Waterfall below):

On December 12, 2020, the Debtors' claims agent notified the Court of the Plan voting result [Docket No. 23], which was as follows:

Exhibits attached to the Disclosure Statement [Docket No. 21]:

On December 11th, the Debtors filed a modified Prepackaged Plan and a related redline [Docket Nos. 230 and 231, respectively] which reflect a settlement reached with C. Eric Waller, the former Chief Executive Officer of MD America (“Waller”) and Waller Family Heirs, LLC (“WFH”) that resolves claims and objections to confirmation of the Prepackaged Plan. Under the modified Plan, Waller will have a $225k Class 6 claim against the Debtors, which will be paid in full in cash under the Plan.

With respect to the settlement, the modified Plan provides, "Pursuant to Bankruptcy Rule 9019 and in full and final settlement of Waller’s and WFH’s Claims against the Debtors and all objections Filed by Waller and/or WFH to confirmation of the Plan or any other relief requested by the Debtors in these Chapter 11 Cases, the Debtors, Waller and WFH agreed to the following:

Regarding the MeiDu Adversary Proceeding, the memorandum states, "On November 3, 2020, MeiDu commenced an adversary proceeding against the Debtors and the Consenting Term Loan Lenders, alleging, among other things, that the Debtors had filed the Chapter 11 Cases in bad faith and that the Chapter 11 Cases should be dismissed 'for cause' pursuant to section 1112(b) of the Bankruptcy Code. See MeiDu America, Inc. v. MD America Energy Holdings, Inc. et al. (In re MD America Energy, LLC, et al.), Adv. No. 20-03456 (Bankr. S.D. Tex. Nov. 3, 2020) (the 'MeiDu Adversary Proceeding'), Docket No. 1 (the 'Complaint') at 20. The Court conducted an emergency trial on November 19, 2020. Upon an oral motion for directed verdict by the Consenting Term Loan Lenders and the Debtors, the Court dismissed the MeiDu Adversary Proceeding with prejudice. On December 8, 2020, the Court entered findings of fact and conclusions of law, including (i) that Messrs. Warshauer and Ritter were lawfully appointed as directors and/or managers of the Debtors; (ii) that Messrs. Warshauer and Ritter, acting as the Debtors’ directors and/or managers, had the requisite organizational and legal authority to authorize these Chapter 11 Cases; and (iii) that these Chapter 11 Cases were filed in good faith. Findings of Fact and Conclusions of Law [MeiDu Adversary Proceeding, Docket No. 79]."

In his objection to confirmation of the Debtors' Plan, Waller stated [Docket No. 205], "After first asking him to rejoin the board of MD America and keeping him employed as the CEO, the newly appointed board members (either on their own or suggested by the Term Lenders) terminated Waller, based on, among other things, allegations made in an anonymous letter submitted to Don Ritter. The Debtors’ board asserts that terminated Waller for 'Cause,' as defined in the Agreement. Although he has asked repeatedly, the Debtors have never made available to Waller an investigation of Waller that supposedly justified termination for Cause. Waller has vigorously denied that Cause existed to terminate him and filed pleadings to arbitrate the termination. Had MD America prevailed in the arbitration, it would have paid out $0 to Waller. Had MD America lost the arbitration because it could not prove Cause, Waller would be entitled to $2,992,400.

Waller submits that the Term Loan Lenders’ board filed the MD America bankruptcy for an improper purpose: to gain litigation leverage against Waller and the Chinese equity owners, MeiDu…After having him act as, among other things, the go between the new board/Term Loan Lenders and MeiDu, Waller was terminated for purported Cause. Waller submits that an excuse for Cause was manufactured to gain a litigation advantage against Waller. Waller further submits that the Term Loan Lenders’ board undertook the termination and fabricated Cause to minimize the amount Term Loan Lenders would have to pay out to Waller outside of bankruptcy and is now using these allegations to (potentially) improperly subordinate Waller’s claim in the bankruptcy. Waller has filed a proof of claim and has asserted an unsecured claim in the amount of $7,611,575.34. This amount reflects that Waller was not terminated for Cause and includes amounts for the Transaction Bonus Plan."

Additionally, Waller's objection provides, "The Debtors filed the bankruptcy and the Plan in bad faith. The dispute between the Lenders and the Debtors did not require the filing of chapter 11. The new board and the Term Loan Lenders could have easily agreed to restructure the allowed secured claim of $117,849,544.40 into a new secured claim of $60,000,000 and forgiven the unsecured deficiency claim. But outside of bankruptcy, such a resolution would have left company and the Term Loan Lenders to lawsuits and demand for arbitration by the three (3) disaffected parties. 12. The primary purpose for filing bankruptcy was to create a litigation advantage for the Debtors against Waller and the Term Loan Lenders against the MeiDu."

In a declaration in support of the Chapter 11 filing (the “Avila Declaration” [Docket No. 28]), Scott Avila, the Debtors’ Chief Restructuring Officer, detailed the events leading to MD America Energy’s Chapter 11 filing. The Avila Declaration provides: “The failure of MD America to pay the Term Loan Prepayment as required by the First Amendment triggered an immediate event of default under the Prepetition Term Loan Agreement. On April 1, 2020, the Term Loan Lenders issued a Notice of Default and the Term Loan Lenders exercised their rights under the Prepetition Term Loan Agreement and Pledge Agreements, including the Parent Pledge Agreement, to remove the MeiDu-appointed board at MD America and appointed the Current Board. Since then, the Current Board has worked to reduce costs and streamline the Debtors’ operations.

On June 24, 2020, more than ten weeks after the Term Loan Lenders exercised their remedies and the Current Board was appointed, MeiDu, as Plaintiffs, sued the Term Loan Lenders and the Current Board, as Defendants, and the Debtors, as nominal defendants in the Supreme Court of the State of New York, County of New York (the “New York Litigation”) seeking equitable remedies, including Declaratory Relief, Injunctive Relief, Discharge of Debt and Set-Off of Debt and damages for conversion and breach of fiduciary duty. My understanding is that MeiDu’s core assertion in the suit is that the Term Loan Lenders were not entitled to exercise their rights under the Pledge Agreements to vote the pledged shares of the Debtors, including the appointment of the Current Board, and, in so doing, acted improperly…On July 9, 2020, the court denied MeiDu’s request for a temporary restraining order and preliminary injunction which had sought to restrict the Current Board from taking any actions and to remove the Current Board and reinstitute the previous board. It is my understanding that, in denying MeiDu’s request, the New York court (Justice Peter Sherwood) found that Plaintiffs had failed to demonstrate the existence of any legal basis for preventing the Term Loan Lenders from exercising their rights to vote the pledged shares. MeiDu filed a notice of appeal of that ruling to the New York Appellate Division, First Department on July 22, 2020. On July 20, 2020, the Term Loan Lenders moved to dismiss the New York Litigation in its entirety. This motion to dismiss is now fully briefed, and as of the date hereof, remains pending.

[T]he Debtors commenced these Chapter 11 Cases following proactive liability management against the backdrop of consistently declining oil and gas prices. The Debtors have undertaken significant efforts to address their leverage and profitability – including (a) an aggregate 41% savings in compensation, office lease, information technology and other general and administrative expenses; and (b) aggregate lease operating expenses savings of 51%. Despite these efforts, the recent, dramatic drop in commodity prices and resulting tightening of the credit markets have frustrated the Debtors’ ability to further deleverage absent a chapter 11 proceeding.” 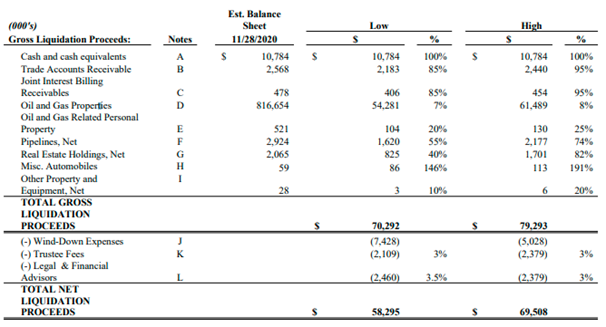 According to the Debtors: “MD America is a Texas based oil and gas operating company engaged in the acquisition, development, exploitation and production of crude oil and natural gas properties in East Texas. Assets currently consist of approximately 71,000 net acres with over 300 drilled and operated wells. 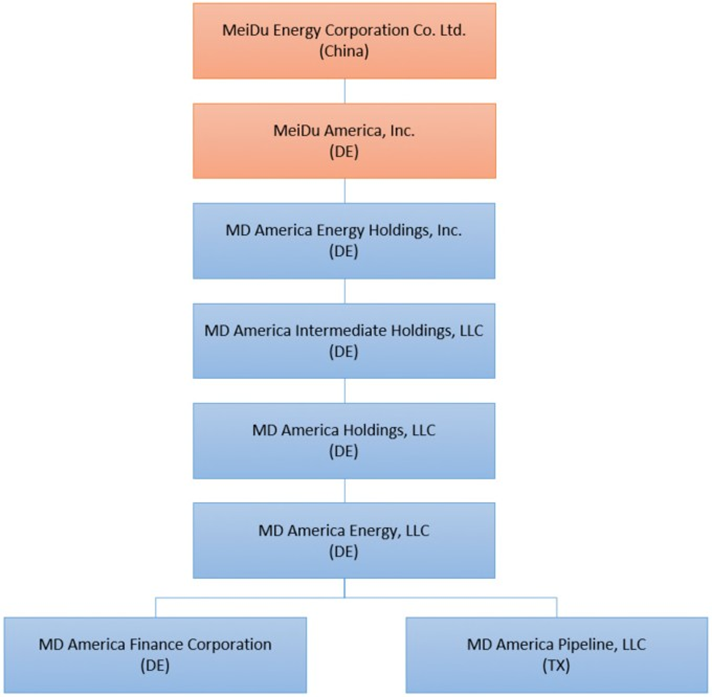