April 30, 2021 – The Court hearing the Meade Instruments cases confirmed the First Amended Plan of Reorganization filed by the Debtors' Official Committee of Unsecured Creditors (the “Committee” or “Plan Proponent”) [Docket No. 392].

The confirmed Plan includes significant amendments which reflect a partial settlement with Plan objectors Sheppard, Mullin, Richter & Hampton LLP ("SMRH"). SMRH had served as counsel to the Debtors in a long-running antitrust litigation with Optronic Technologies, Inc. (dba Orion Telescopes & Binoculars or "Orion"). In the course of that litigation, won by Orion (the stakeholder now at the center of the Debtors' Plan), the Debtors incurred $2.7mn of fees that are still owed to SMRH and which sit in the Plan's Class 2 ("General Unsecured Claims"). SMRH's scathing, multi-pronged objection reminds that hell has no fury like a counsel scorned and its first few paragraphs [Docket No. 376] are certainly worth the time invested.

Changes now incorporated into the plan by the Court's Plan confirmation order include:

On December 4, 2019, Meade Instruments Corp. and one affiliated Debtor, Sunny Optics Inc. (together, “Meade” or the “Debtors”), filed for Chapter 11 protection with the U.S. Bankruptcy Court in the Central District of California, lead case number 19-14714. At filing, the Irvine, California-based Debtors, which manufacture, import and distribute optical instruments for the consumer market, noted estimated assets between $10.0mn and $50.0mn; and estimated liabilities between $10.0mn and $50.0mn.

For the Debtors, bought by Ningbo Sunny Electronic Co. Ltd. (“Ningbo”) in 2013, the filings came a week after a California federal jury found that Ningbo, through Meade, was guilty of price fixing in the U.S. consumer telescope market. That jury also awarded Orion $16.8mn, which may be subject to trebling under the Clayton Antitrust Act.

On April 7, 2021, the Committee filed a memorandum of law in support of the Plan confirmation [Docket No. 379], stating, “The Plan is the product of negotiations between and among the Debtor, the Committee, and Optronic Technologies, Inc. dba Orion Telescopes (‘Orion’). Aside from the SMRH Objection and SMRH’s vote against the Plan, the Plan received unanimous support from the estate’s general unsecured creditors, with every vote cast (except that of SMRH) accepting the Plan. However, because SMRH’s vote against the Plan resulted in Class 2 rejecting the Plan, and because Class 3 and 4 are deemed to have rejected the Plan, the Committee seeks confirmation under the ‘cram down’ rules set forth in section 1129(b). As set forth below, the Plan satisfies all applicable requirements of section 1129 of the Code, and notwithstanding SMRH’s ‘no’ vote, the Court can and should confirm the Plan.” (See detailed voting results below)….

Only one creditor in Class 2 voted to reject the Plan – SMRH with a Disputed Claim of $2.68 million.  As discussed in the Committee Reply, in the event that SMRH is ultimately determined to have an Allowed Claim, the GUC Fund Amount will be increased such that the Creditors in Class 2 will be projected to receive 15% of their Allowed Claims. If SMRH’s claim is Disallowed, the remaining Class 2 Creditors are projected to receive 30% of their Allowed Claims. On the other hand, in chapter 7, after liquidation of the Debtor’s assets, payment of allowed priority and administrative claims, including the increased costs of winding down the Debtor’s operations, general unsecured creditors are projected to receive 10.8%, if the SMRH Claim is Allowed."

The Disclosure Statement [Docket No. 364] notes, “The exclusive period for the Debtor to file a plan has expired, and as such the Committee, in consultation with the Debtor, has filed its Plan. A plan of reorganization may provide for a debtor to reorganize by continuing to operate while it restructures its financial affairs, to obtain post-petition financing or capital infusions or to liquidate by selling assets of the estate or a combination thereof. The Committee is the party proposing the Plan, with the support and financial contributions of the Debtor’s largest creditor, Optronic Technologies, Inc. dba Orion Telescopes & Binoculars (‘Orion’). The Disclosure Statement and Plan were prepared in coordination and consultation with the Debtor. Based on discussions between the Debtor and the Committee, the Committee believes, and anticipates, that the Debtor will have no objections to, and will support, approval of the Disclosure Statement and confirmation of the Plan.”

The following is a summary of classes, claims, voting rights and expected recoveries (defined terms are as defined in the Plan and/or Disclosure Statement; also see Liquidation Analysis):

NB: The below precedes the Court ordered Plan amendments and should be read in light of those amendments listed above.

On April 7, 2021, the Debtors' claims agent notified the Court of the Plan voting results [Docket No. 380], which were as follows.

FN: Class 4 consists of Equity Interests in the Debtor. No member of either Class 3 or Class 4 cast a vote.

The objection filed by Class 2 creditor Sheppard, Mullin, Richter & Hampton LLP [Docket No. 376] states, "As demonstrated by the undisputed facts discussed below, the Unsecured Creditors Committee’s Plan contains several unlawful or unsupportable provisions in violation of the confirmation requirements of 11 U.S.C. 1129 and other Code sections. More specifically, the Plan cannot be confirmed because:

The Disclosure Statement [Docket No. 364] attached the following exhibits: 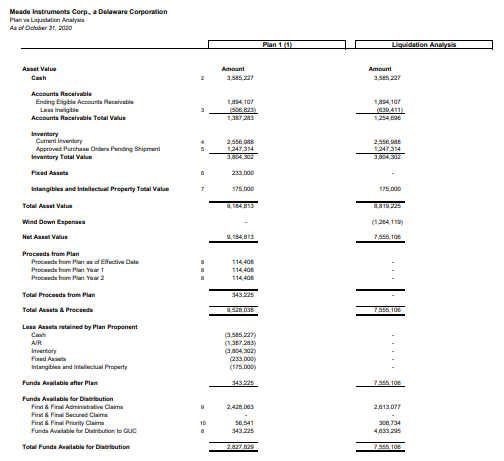 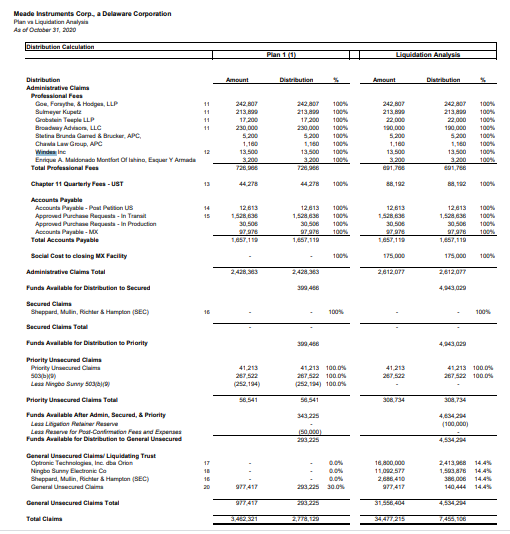 The Debtors state: “Meade Instruments is acknowledged as one of the most innovative and dynamic companies in the telescope market. Known for its groundbreaking telescopic designs, Meade has introduced dozens of improvements over the years that have made amateur astronomy easier and more enjoyable than ever.

Meade Instruments was founded in 1972 by John Diebel. It was started as a one man mail order business, supplying small refracting telescopes. In the decades after, Meade introduced countless innovations and firsts in the world of amateur astronomy. In 2004, Meade Instruments acquired the Coronado brand of solar telescopes. These highly specialized hydrogen alpha telescopes produces detailed images of solar prominences and flares, and continues to be unmatched in the marketplace.

Meade Instruments has built its reputation and its products through ground-breaking, industry-leading innovation and precision optics, the hallmark of Meade superiority. You’ll find that on every product we make. Meade Instruments is adding technology to all of our products to make them easier and more fun to use. At Meade, we believe in providing a remarkable experience, using technology to make astronomy accessible and enjoyable to everyone, regardless of your experience level.”

Revlon Warns of Bankruptcy Filing Ahead of Desperate Exchange Offer