On March 11, 2020, Modell’s Sporting Goods, Inc. and 13 affiliated Debtors (“Modells” or the “Debtors”) filed for Chapter 11 protection with the U.S. Bankruptcy Court in the District of New Jersey, lead case number 20-14179. At filing, the Debtors, America's oldest, family-owned and operated retailer of sporting goods and athletic apparel, noted estimated assets between $1.0mn and $10.0mn; and estimated liabilities between $10.0mn and $50.0mn. The Duffy Declaration [Docket No.  24] adds that "as of the Petition Date, the Debtors’ balance sheet reflects approximately $220 million in assets and approximately $288 million in liabilities."

The Debtors' memorandum of law in support of Plan confirmation (the "Memorandum") [Docket No. 816] provided the following pre-confirmation hearing summation: “After exploring out-of-court strategic alternatives [see also "Mothballing," below], the Debtors concluded that they were unable to reorganize and that the best way to maximize value for the benefit of all stakeholders was through court-approved store-closing sales, the sale of certain of the Debtors’ remaining assets and an overall wind-down of their business operations . After nearly eight (8) months in Chapter 11 and completing the liquidation of the Debtors’ assets in the midst of the COVID-19 global pandemic, the Debtors now seek confirmation of the Plan.

If confirmed, the Plan will create a liquidation trust, which will pursue causes of action on behalf of the estates, which in turn will fairly and appropriately distribute the value of the Estates to the Debtors’ creditors and provide for the orderly wind-down of the Estates.

The Plan is the culmination of the Debtors’ substantial efforts, heavily negotiated with the Official Committee of Unsecured Creditors (the ‘Committee’), over the past several months to bring these Chapter 11 Cases to a value maximizing close. The Plan provides for the liquidation and conversion of all of the Debtors’ remaining assets to cash and the distribution of the net proceeds realized therefrom, along with existing cash, to creditors holding Allowed Claims in accordance with the relative priorities established in the Bankruptcy Code.

The Plan is supported by the Debtors’ key stakeholders, including the Committee. In addition, the holders of Claims in Class 5 (General Unsecured Claims), the only class entitled to vote, overwhelmingly voted to accept the Plan."

Pursuant to the Plan, the Debtors or the Liquidation Trustee will pay or provide for payments of Claims as follows:

The following is a summary of classes, claims, voting rights and expected recoveries (defined terms are in the Plan and/or Disclosure Statement, see also the Liquidation Analysis below):

On November 10, 2020, the Debtors' claims agent notified the Court of the Plan voting results [Docket No. 814], which was as follows:

The Modell's cases were the first to request a COVID-19 related mothballing of operations, a step that was later embraced in further cases (and courts), including The CraftWorks brewpub chain (Delaware) and Pier 1 Imports (Eastern District of Virginia). The Art Van Furniture cases (also Delaware), however, show that certain debtors cannot be saved by these extraordinary efforts to preserve corporate life. Coronavirus-afflicted Art Van suddenly finding itself without the resources necessary to see it through the crisis on a Chapter 11 ventilator; and without a "viable path" requesting a conversion of their cases to Chapter 7.

Please see our stories on Docket Nos. 142 and 294 for more on the mothballing strategy, which ultimately failed given the prolonged nature of the pandemic.

In a declaration in support of the Chapter 11 filing (the “Duffy Declaration”) [Docket No. 24], Robert J. Duffy, the Debtors' Chief Restructuring Officer, detailed the events leading to Modell's Chapter 11 filing. The Duffy Declaration sums up the the impact of what are now familiar macro-level challenges for brick and mortar retailers as leaving the Debtors "weighed down by a store footprint that is disproportionate to market demands." Amongst more Debtor-specific challenges, Mr. Duffy notes the impact of warmer-than-normal weather (climate change?) on winter apparel sales and a hit taken in respect of branded-apparel sales stemming from under-performing regional professional sports teams. Compounding matters, poor sales and rumors of financial fragility led vendors to demand more onerous trading terms; resulting in less attractive inventory and sales.

The Duffy Declaration states: "The Debtors, like many other retail companies, have faced a challenging commercial environment over the past several years. The Debtors’ challenges have been exacerbated by increased competition from big-box and specialty sporting goods retailers, declining participation in team sports among youth and teens and a shift in customer preferences away from physical retail stores and toward online-only stores. Given the Debtors’ substantial brick-and-mortar presence, their business has been heavily dependent on in-store traffic, which has declined in recent years. The Debtors’ financial condition is weighed down by a store footprint that is disproportionate to market demands.

Complicating matters further, the Northeastern states where the Debtors operate experienced warmer weather than expected in December 2019 and January 2020, which caused a decrease in cold-weather apparel and footwear sales.

The success of regional sports teams also significantly influences the Debtors’ sales. For example, the Philadelphia Eagles Super Bowl victory led to strong financial performance in the fourth quarter of 2017. For fiscal years 2018 and 2019, however, the Debtors’ sales declined given the lack of success of regional sports teams.

The lifeline of the Debtors’ business is their access to and relationships with their network of suppliers. The Debtors’ ability to generate income is wholly dependent on sales. If the quality of the Debtors’ inventory decreases, sales do as well. In early 2019, many of the Debtors’ key vendors reacted to rumors surrounding the Debtors’ financial stability and demanded modification of the terms on which they delivered goods to the Debtors, including reduced payment schedules or cash in advance and reduced customary trade credit to the Debtors."

The Debtors are parties to a June 2011 credit agreement (the “Credit Agreement”) by and among the Debtors, JPMorgan Chase Bank, N.A., as administrative agent and co-collateral agent and issuing bank, Wells Fargo Bank, National Association, as term agent and co-collateral agent and the lenders party thereto from time to time. As of the Petition Date, the Debtors owed in aggregate principal amount not less than (i) $29,560,711 to the prepetition administrative agent on account of revolving loans, (ii) $9,225,000 to the prepetition term agent on account a term loan, (iii) additional amounts arising from and relating to letters of credit in the aggregate undrawn face amount of $4,576,208.97 and (iv) all interest and fees on the above.

Additionally, as of the Petition date, the Debtors believe that unsecured claims against them are in excess of $100.0mn. These include (i) accrued and unpaid trade and other unsecured debt incurred in the ordinary course of the Debtors’ business, (ii) unpaid amounts owed to the Debtors’ vendors, (iii) claims for unpaid rent and other obligations under the Debtors’ leases (amounts here expected to rise as leases are rejected) and (iv) a $6.8mn loan from M and M Lending LLC, a prepetition subordinated creditor The Debtors are also jointly liable with non-debtor Henry Modell & Company, Inc. (“HMC”) to make quarterly contributions to a pension plan which is underfunded by approximately $25.8mn.

The Debtors' Disclosure Statement [Docket No. 759] attached the following documents:

The Debtors filed Plan Supplements at Docket Nos. 793 and 826 which attached the following documents:

Liquidation Analysis (see Exhibit B of Disclosure Statement [Docket No. 759] for notes) 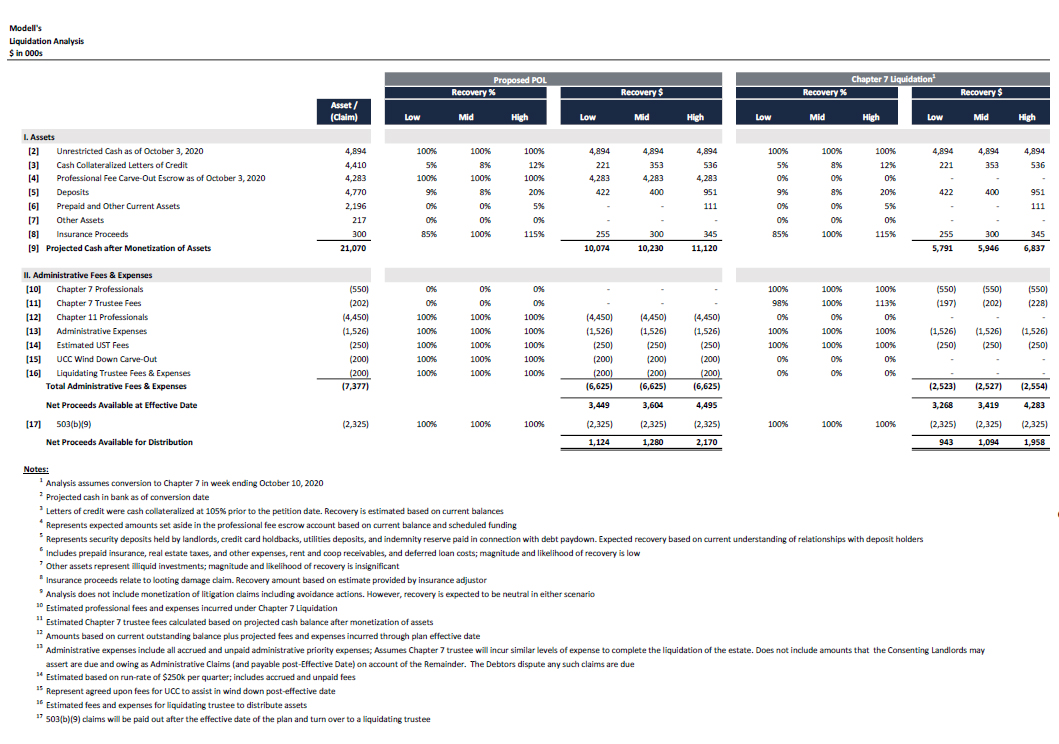 According to the Debtors: "Modell's Sporting Goods is America's oldest, family-owned and operated retailer of sporting goods, athletic footwear, active apparel and fan gear. We are committed to providing a convenient and compelling shopping experience for the athlete and fan in all of us.

Founded in 1889 by Morris A. Modell, the first Modell's store was located on Cortlandt Street in lower Manhattan, NYC. Four generations of the Modell family have developed the family business into a chain of over 150 stores throughout the Northeast.

Modell's Sporting Goods represents a tradition of shopping with one of the most trusted names in the business."

The Debtors do not own any real estate and lease their store locations, corporate offices, and distribution center under operating leases that expire on various dates through 2033. The Debtors’ rental expenses total approximately $95.0mn annually.