In 2011, the Debtors bought Muzak Holdings LLC for $345.0mn. In 2017, the Debtors, then trading on the Toronto Stock Exchange (TSX:MM) and having filed for bankruptcy protection in Canada (with a Chapter 15 filing in the US), were taken private by affiliates of Apollo Global Management, LLC and GSO Capital Partners LP (ie Blackstone) as part of that earlier court-sanctioned restructuring. See Significant Shareholders, below.

In a press release announcing the filing, Mood media advised that: “it has taken the next step to implement the 'prepackaged' financial restructuring plan that will reduce the Company’s debt by approximately $404 million.

As previously announced on June 26, 2020, the Company entered into a comprehensive restructuring support agreement (the 'RSA') with certain of its lenders, noteholders and equity sponsors on the terms of the 'prepackaged' financial restructuring plan. 100% of the Company’s first lien term loan lenders and 100% of its second lien PIK noteholders that timely submitted ballots voted to accept the prepackaged plan. The Company will seek confirmation of the prepackaged plan at a hearing scheduled for July 31, 2020."

David Hoodis, Chief Executive Officer of Mood Media, commented: “In the face of this unprecedented time, we are taking decisive actions to reimagine Mood Media and become an even better partner to our clients. The prepackaged financial restructuring plan we are now implementing is a key part of these efforts, as it provides a clear and expedited path to strengthening our financial position. With the unanimous support of our voting lenders and noteholders, we expect to move quickly through the court‑supervised process.”

The Disclosure Statement points the finger at COVID-19 before conceding that it had some pretty significant underlying conditions: namely that (i) constrained liquidity has left it unable to properly compete in a highly competitive market characterized by rapidly changing (and expensive) technology and (ii) that evolving consumer preferences has resulted in "higher supply-side costs" as clients scramble to adjust to those evolving preferences (and the Debtors in turn scrambling to find answers for their clients). The Disclosure Statement provides:

"Despite Mood’s global presence and leading market position as a recognized provider of media and marketing solutions, Mood currently faces a certain challenges formed by the convergence of several recent events.

Prior to COVID-19, Mood had a manageable liquidity cushion and was proactively taking steps to right-size its operations, deleverage its capital structure, and improve the long-term health of its balance sheet.

For Mood, as a business that primarily serves customers operating in some of the hardest hit sectors of the domestic and international economy, that meant abandoning its strategic plan in an effort to prioritize addressing urgent customer and employee needs and adapting in real time to an entirely new operating environment.

While COVID-19 is not the sole cause of Mood’s current liquidity crisis, the pandemic has undoubtedly been a catalyst for Mood’s declining liquidity position and its current inability to responsibly satisfy upcoming debt service obligations.

Mood’s product and service offerings compete in a market characterized by rapidly changing technologies, frequent innovations, and continuously evolving industry standards. Mood has historically been able to compete in the market by investing heavily in the development and delivery of new and efficient methods and technologies for its customers. Mood’s balance sheet has negatively impacted its ability to focus on efficiencies and innovations to lower costs and drive customer satisfaction, especially in an environment of robust price competition and pinched margins. Increases for inputs such as licensing rights combined with the downward pressures on pricing from competition have outpaced Mood’s ability to manage both its significant leverage and its need to invest in the innovation that the market demands.

Not only has Mood struggled to combat pressures from its competition but it has also experienced significant challenges in the form of (i) increased vendor costs and risks and (ii) new customer needs caused by the evolving preferences of their end-user consumers. Recent technological advancements have disrupted the music and media industry, and this disruption has, in turn, resulted in increased licensing and royalty fees, burdensome distribution logistics, more stringent copyright and branding requirements, and a host of other new and costly challenges. Higher supply-side costs have been compounded by the increased cost of servicing clients. Many of Mood’s customers have struggled to cater to constantly evolving consumer preferences and trends and, in response, Mood has invested in initiatives to meet new customer demands."

The below is a summary of classes, claims, voting rights and expected recoveries (defined terms are as defined in the Plan and/or Disclosure Statement, see also the Liquidation Analysis below)

As of July 1, 2020, the Debtors have approximately $627,660,315 in aggregate outstanding principal on their funded debt obligations, the details of which are set forth in more detail in the table below:

According to the Debtors: "Mood Media is the world’s leading on-premise and connected media solutions company dedicated to elevating the Customer Experience. We create greater emotional connections between brands and consumers through the right combination of sight, sound, scent, social and systems solutions. We reach more than 150 million consumers each day through more than 400,000 subscriber locations in 100+ countries around the globe. Mood’s clients include businesses of all sizes and market sectors, from the world’s most recognized retailers and hotels to quick-service restaurants, local banks and thousands of small businesses. 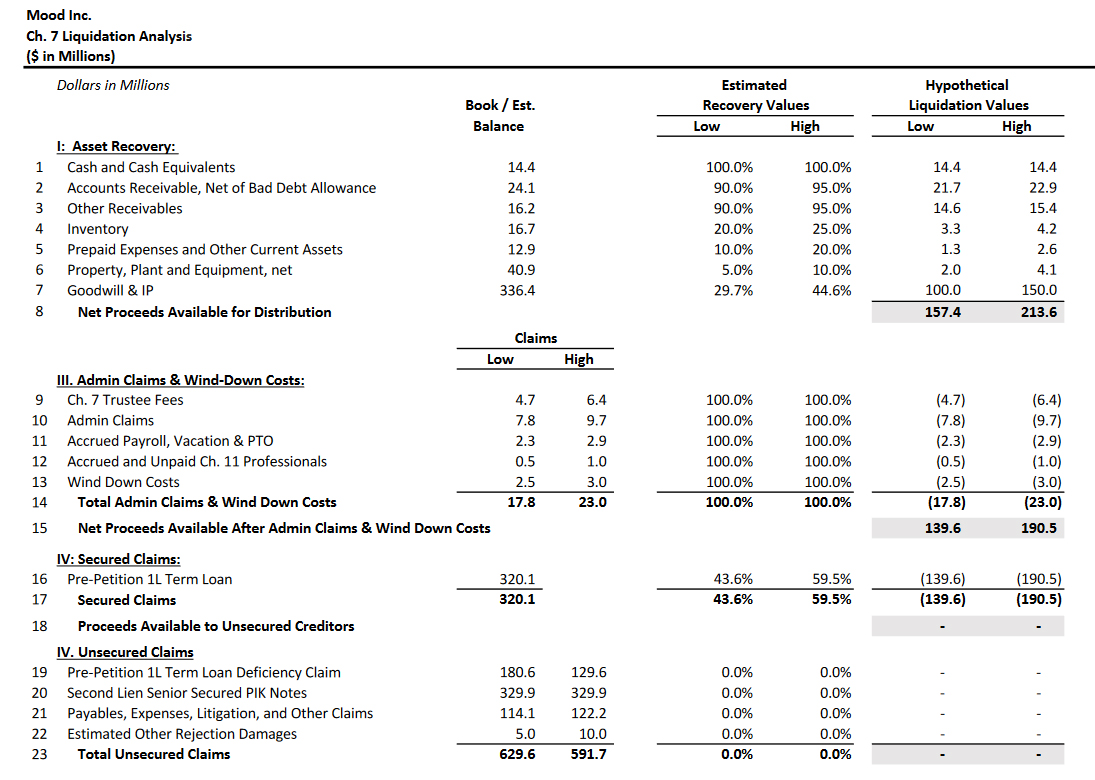 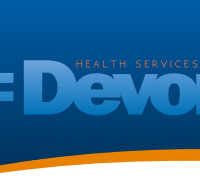