The Debtors’ lead petition notes between 1 and 50 creditors; estimated assets between $10.0bn and $50.0bn (presumably reflecting the Debtors estimated 164mn barrels of recoverable oil); and estimated liabilities between $100.0mn and $500.0mn.

In a declaration in support of the Chapter 11 filings (the “Siffin Declaration”) [Docket No. 50], Mark Siffin, the CEO of affiliate Debtor MDC Energy LLC, stated: "The Company commenced the Chapter 11 Cases to maximize its enterprise value for the benefit of its stakeholders.  At present, the Company intends to refinance its existing debt and raise additional capital to continue its drilling and development plan."

MDC’s initial borrowing under the RBL Agreement was $60 million, and it was permitted to borrow and the MDC Secured Lenders committed to provide additional amounts periodically, up to a maximum of $300 million, as MDC’s “Borrowing Base” was recalculated to account for its growth in its oil and gas assets. The Debtors note that “MDC significantly increased its Proved Reserves since September 2018; however, the RBL balance remained at $60 million.”

The Siffin Declaration details the events leading to the Debtors' Chapter 11 filing, specifically attributing the Debtors' need for Chapter 11 protection to the "failure to fund" and "material breach" of Riverstone and other Lenders; notwithstanding the funding obligation of those Lenders to do so under the credit arrangements discussed above. This alleged failure to fund occurs against the backdrop of a "precipitous" decline in oil and gas prices; a decline which impacted revenues and necessitated further borrowing; it also clearly made Lenders, who watched borrowing levels soar to $410.0mn, very nervous. In addition to claiming copious reserves (164 million barrels of oil equivalent), the Declaration goes to some lengths to detail the Debtors' recent success and a rapid tripling of annualized EBITDA to $120.0mn (see more beow)

Thus, to maintain the necessary drilling program, MTE and MDC continued to borrow the funds to which they were entitled under the respective agreements. By mid-April 2019, MTE had drawn down all of but $65 million of the available funds under the MTE Credit Facility for a total amount drawn down of $410 million. These funds were used to finance MDC’s operations.

At this time, MDC has drawn on the initial $60,000,000 under the RBL Agreement, but the MDC Secured Lenders did not fund any further amounts thereunder.

On April 18, 2019, in accordance with the terms of the MTE Credit Facility, MTE sent a borrowing notice (the ‘April 18 Borrowing Notice’) to Riverstone calling for the MTE Lenders to fund the remaining $65 million that was committed and available.

While Riverstone (and the MTE Lenders) knew that these funds were to be used to provide operating capital for MDC’s drilling operations, most notably, to pay MDC’s trade creditors, Riverstone failed to provide the requested funds within ten days as required by the MTE Credit Facility or at any time thereafter. This material breach of the MTE Credit Facility directly led to a cascade of harm to MTE and MDC by causing a significant liquidity shortfall and precluding MDC from being able to fund its operations and make orderly payments on its accounts payable, which largely consisted of its trade creditors." 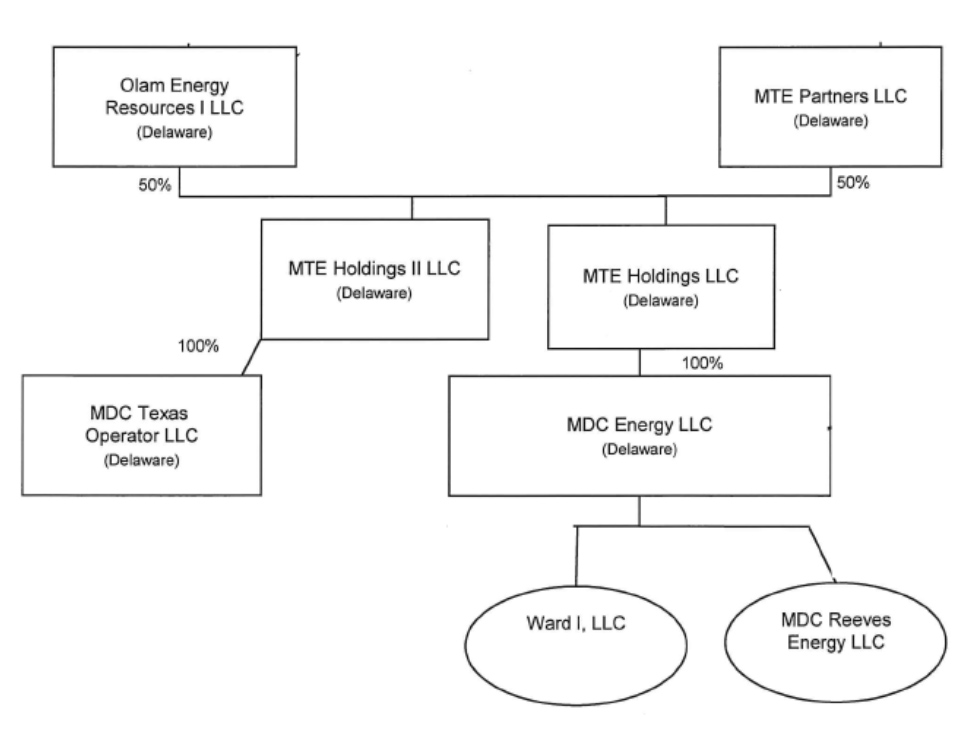 MTE was formed in June 2014 to hold membership interests in MDC and MDC Texas Operator LLC ("MDC Operator") and their subsidiaries. MDC conducts oil and gas exploration, drilling and development operations in the Permian Basin in Texas. MDC Operator acts as operator of the properties owned by MDC and its subsidiaries pursuant to an operating agreement.

The Company has no employees. Pursuant to management services agreements with MDC and MDC Operator, Maefield Development Corporation (“Manager”), a non-debtor affiliate of the Company, provides management and related services to the Company utilizing its own employees. This includes the services of 23 dedicated fulltime employees located at the offices of the Manager in Midland, Texas. The Company reimburses the Manager for the direct costs of providing these services without a mark-up. These employees are also eligible to participate in the healthcare plan provided by the Manager. Typical monthly payroll plus healthcare is approximately $305,000.

The Siffin Declaration adds: "In the past year, MDC significantly expanded its operations. Specifically, it has: