A deadline of February 1, 2021 has been set for filing administrative claims and professional fee claims.

The Debtor's memorandum of law in support of Plan confirmation [Docket No. 269] provided the following pre-Plan confirmation hearing summary: "The Plan, which has 100% support from the Voting Classes (as defined herein), is the result of significant compromise by and among the Estate’s most significant stakeholder, RKJ, to ensure that the Debtor’s business will continue and prosper. If confirmed, the Plan will (i) deleverage the Debtor’s balance sheet—with RKJ contributing approximately $63 million in outstanding obligations as capital in the Reorganized Debtor; (ii) allow for a leaner, more profitable retail business after emergence, with a right-sized footprint and the assumption of re-negotiated leases that will reduce future operating expenses; (iii) provide the Reorganized Debtor with access to additional liquidity in the form of a $22 million senior-secured credit facility that will, among other things, fund Plan distributions and future operations, including the Reorganized Debtor’s efforts to grow its online retail business; (iv) provide for cure payments to the Debtor’s creditors of over $860,000, and (v) provide a recovery to general unsecured creditors in the form of a $4 million guaranteed cash pool to be used exclusively for funding pro rata distributions to unsecured creditors in accordance with the Plan. Simply put, the Plan will allow the Debtor to achieve a fresh start and an opportunity to thrive as a going concern for years to come.

The Disclosure Statement [Docket No. 217] details a Plan which will, absent the application of cramdown provisions which the Debtor has effectively waived, require the support of general unsecured creditors in Class 3. That class is to split a cash pool of $4.0mn which will deliver an estimated recovery of 50% – 66.67%.

The Disclosure Statement provides : “The Plan contemplates a reorganization of the Debtor’s operations pursuant to which the Reorganized Debtor will operate a leaner and more profitable MUJI-branded store portfolio than prior to the bankruptcy Filing, all while continuing its growth of online sales. To that end, the Plan preserves the going-concern value of the Debtor’s business, maximizes recoveries to constituents, and protects jobs of the Debtor’s employees. More specifically, pursuant to the terms of the Plan:

On December 18, 2020, the Debtor's claims agent notified the Court of the Plan voting results [Docket No. 264], which were as follows.

On August 11, 2020, the Court hearing the MUJI U.S.A. Limited case issued a final order authorizing the Debtor to (i) access a further $15.4mn in new money, debtor-in-possession (“DIP”) financing and (ii) roll-up $4.0mn of prepetition debt (provided in June 2020 by Ryohin Keikaku Co., Ltd, “RKC”) to see the Debtor through the run up to its Chapter 11 filing) [Docket No. 105]. RKC is also the Debtor’s parent/sole shareholder.

The following documents were attached to the Disclosure Statement [Docket No. 217]:

The Debtor experienced operating losses for each year since 2017, which losses were funded by an increase in the managed cash overdraft (discussed above) and issuance of common stock to RKJ. A large portion of these losses are directly attributable to the Debtor having expanded its footprint quickly and entered into expensive, above-market leases for numerous store locations.

The Debtor experienced continued operating losses in January and February 2020, and was struggling financially even prior to the outbreak of COVID-19. However, such issues were exacerbated by the COVID-19 pandemic as all of the Debtor’s stores were forced to close due to orders by various state and local authorities.

The Debtor ultimately determined that a proceeding under chapter 11 of the Bankruptcy Code was in the best interests of the Debtor and its stakeholders, with the intent of restructuring its operations and right-sizing its footprint, while also continuing to grow its online presence.

In preparation for a bankruptcy Filing, the Debtor negotiated with RKJ (in such capacity, the ‘DIP Lender’) to extend it debtor-in-possession financing consisting of up to $22.0 million in secured, delayed-draw term loans. The DIP Facility provided MUJI with timely access to liquidity while it restarted operations.”

Liquidation Analysis (See Exhibit 1 at Docket No. 233 for notes) 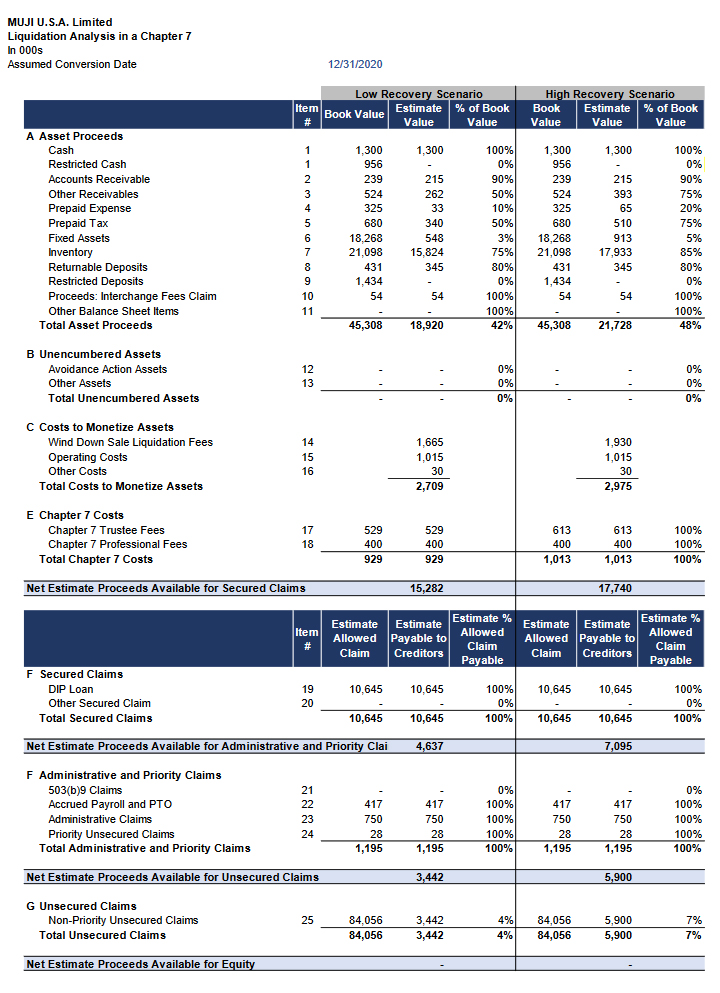 According to Ryohin: "MUJI, first launched in December 1980 as a proprietary brand of Seiyu Store (now Seiyu GK) with 40 items primarily on food, is celebrating its 40th anniversary this year. During the past years, the number of products has been increased to around 7,000, and MUJI stores are now available in 31 countries and regions including Japan. MUJI products, which are produced by constantly returning to the starting point of "manufacturing no-frills quality products" and always taking into consideration the producers as well as the environment, have been enjoying continuous support from our customers around the world.

Based on our overall strategy of "To Serve a Purpose" for the people and society, today we are expanding beyond the concept of retailing to provide design for self-driving buses, collaborate on specialty food sales with local people in and outside Japan – seeking in all these efforts to revitalize local communities.

In a situation where uncertainties are expected to continue due to the enormous impact of the COVID-19 pandemic worldwide, we have been, and will continue to contribute to society as a sustainable global company that provides products and services trusted by people worldwide. We would very much appreciate the continued support and understanding of our stakeholders.