On February 11, 2020, Murray Metallurgical Coal Holdings, LLC and five affiliated Debtors (“Met Holdings” or the “Debtors”) filed for Chapter 11 protection with the U.S. Bankruptcy Court in the Southern District of Ohio, lead case number 20-10390FN1. At filing, the Debtors, an entity formed in 2019 to acquire the metallurgical coal assets out of Mission Coal’s bankruptcy estate, noted estimated assets between $100.0mn and $500.0mn; and estimated liabilities between $100.0mn and $500.0mn. In a sibsequently filed Schedule A/J, the lead Debtor noted $8.37mn of assets and $203.8mn of liabilities [Docket No. 253].

The Debtors' memorandum in support of Plan confirmation provides: "The Plan…marks a victory for the Debtors, their estates, and the many families and vendors who depend upon the Debtors and will rely on the success of the Plan for their livelihoods. The Plan will sell the Debtors’ remaining mining operations as a going concern, ensuring that the Oak Grove Mining Complex will continue operating—providing employment to hundreds of employees and a critical trade partner for hundreds of vendors. The Plan also provides for the completion of environmentally critical reclamation activities at property owned by Murray Alabama Minerals and a winding up of all remaining business affairs including the recently discontinued affairs of Murray Maple Eagle Coal LLC.

The Plan provides value to classes of creditors that would have been otherwise unavailable, including recoveries to all secured creditors and payment in full of all administrative and priority claims….The going-concern sale of the Oak Grove mining complex upon which the Plan is premised avoids a fire-sale liquidation and fulfills the Congressional mandate favoring a fresh start over the piecemeal dismantling of a debtor’s business. The byproduct of painstaking deliberations and negotiations over many months with all of the Debtors’ key stakeholders, the Plan represents the result of two market tested asset sales and represents the best possible result for all parties in interest. These deliberations and negotiations have garnered critical support for the Plan from the Debtors’ senior secured lenders and the UCC, among others.

The Amended Disclosure Statement [Docket No. 516] notes, “The Plan is premised on the February 11, 2020 RSA, which is the product of extensive arm’s length negotiations between and among the Debtors and the Restructuring Support Parties (as defined in the Plan, the Restructuring Support Parties are the Prepetition Term Loan Lenders, Murray Energy Corporation (‘Murray Energy’), Murray Metallurgical Coal Properties, LLC, Javelin Investment Holdings, LLC (‘Javelin Investments’), and Javelin Global Commodities (UK) LTD (‘Javelin Global’)).

There are three fundamental elements of the Restructuring:

The Disclosure Statement continues: “As amended, the Plan proposes to fund creditor recoveries from (i) the Sale Proceeds (including the proceeds of the New First Lien Facility), (ii) the New Second Lien Facility, (iii) the New Third Lien Facility, (iv) the New Preferred Equity, (v) Cash proceeds from the sale of any of the Debtors’ assets that are not acquired by the Winning Bidder and (vi) the Wind-Down Amount. After the Effective Date, to the extent not held in the Professional Fee Escrow Account, the amounts held by the Wind-Down Trust will be held in the Wind-Down Trust Account.

[P]rior to confirmation, the Debtors agreed to conduct a marketing and Auction process for substantially all of Oak Grove’s assets in accordance with the Bidding Procedures to determine the Winning Bidder. The Debtors agreed to solicit a higher or otherwise better offer than the Stalking Horse APA. If the Debtors were unable to secure a higher or otherwise better offer than the proposal memorialized in the Stalking Horse APA, NewCo will be declared the Winning Bidder for purposes of the Plan, and the Debtors agreed to seek Confirmation of the Plan as contemplated in the Plan. As discussed more fully below, the Auction for the assets of Oak Grove concluded on May 5, 2020 and NewCo was declared the Winning Bidder. Accordingly, pursuant to the Oak Grove Bidding Procedures…the Sale Transaction will be consummated pursuant to the Plan.

On the Effective Date, the Debtors will consummate the Sale Transaction and, among other things, the Acquired Assets will be transferred to and vest in the Winning Bidder free and clear of all Liens, Claims, charges, interests or other encumbrances pursuant to sections 363(f) and 1141(c) of the Bankruptcy Code and in accordance with the terms of the Confirmation Order, the Plan, and the Sale Transaction Documentation, each as applicable. In exchange, the Winning Bidder will pay to the Debtors the Sale Proceeds or other non-Cash consideration in accordance with the Sale Transaction Documentation.”

The following is an updated summary of classes, claims, voting rights and expected recoveries (defined terms are in the Plan; please see also the liquidation analysis below):

On July 3, 2020, the Debtors’ claims agent notified the Court of the Plan voting results [Docket No. 637], which were as follows:

In a declaration in support of the Chapter 11 filing (the "Declaration”), Robert D. Moore, President, Chief Executive Officer, and Chief Financial Officer of Murray Energy Holdings, detailed the events leading to the Met Holdings Chapter 11 filings. The Declaration focuses on three principal contributing factors in its "tale of woe:" The continued impact of a "downward spiral in commodity prices" (even though prices appear to have recently stabilized); the heavy burden of federal and state regulation; and the difficulty in competing with other coal entities that have already been through Chapter 11 and emerged with lighter capital structures. The Declaration further points out that the experience of trade vendors with other distresses coal companies has made those wary vendors more difficult to bargain with. The Declaration states:

"The broader Murray enterprise had historically been able to navigate the challenges of the coal marketplace. However, facing rapidly deteriorating conditions across the coal industry, like many of its competitors, to preserve and maximize the value of its enterprise, Murray was compelled to seek bankruptcy protection, joining more than 40 other coal companies that have filed bankruptcy since 2008, with more than half a dozen major operators filing in the last year alone.

Indeed, on October 29, 2019, Murray and 98 of its affiliates (collectively, the ‘Murray Debtors’) (which do not include the six Debtors here), filed chapter 11 petitions in the United States Bankruptcy Court for the Southern District of Ohio.

These industry-wide coal bankruptcies affected multiple mines and thousands of workers across the United States. They have had a material impact on the coal industry in general and Murray in particular. Murray’s competitors have successfully used bankruptcy to reduce debt and lower their cost structures by, among other things, eliminating cash interest obligations and pension and other benefit obligations, leaving them in a better position to compete for volume and Case pricing in the current market, while Murray continued to satisfy significant financial obligations by the weight of its own capital structure.

Although the metallurgical coal market appears to have stabilized after several years of price declines, the coal industry has recently been in a state of turmoil. Coal mining businesses across the United States and around the world have experienced pressure from the downward spiral in commodity prices. Several factors contribute to the health of a coal mining business, including an inventory of suitable sites to mine, a consistent mining program, a relatively consistent outlook for commodity prices, and compliance with restrictive federal and state regulations on coal producers.

Federal and state regulatory authorities impose significant obligations on the coal mining industry with respect to employee health and safety, permitting and licensing requirements, environmental protection, the reclamation and restoration of mining properties after mining has been completed, and the effect of mining on surface and groundwater quality. The costs of compliance with such obligations has contributed to the Debtors’ financial difficulties. Other regulations, such as those governing mine safety and most notably those administered by the Mine Safety Health Administration, have imposed additional costs on the Debtors.

As noted above, the Debtors are not alone in feeling the pressure on the industry. Other similarly-situated companies have defaulted on their debt obligations, negotiated agreements with creditors to avoid defaulting, effectuated out-of-court restructurings, or gone through the bankruptcy process. Practically speaking, the fact that so many coal companies have gone through bankruptcy has diminished the Debtors’ ability to bargain with vendors and customers.

The following documents were attached to the Disclosure Statement [Docket No. 504]:

On June 23, 2020, the Debtors filed a Plan Supplement [Docket No. 573] which was subsequently amended at Docket Nos. 616 and 704, and which collectively attached the following documents:

Liquidation Analysis (see Exhibit B to Disclosure Statement [Docket No. 516] for notes) 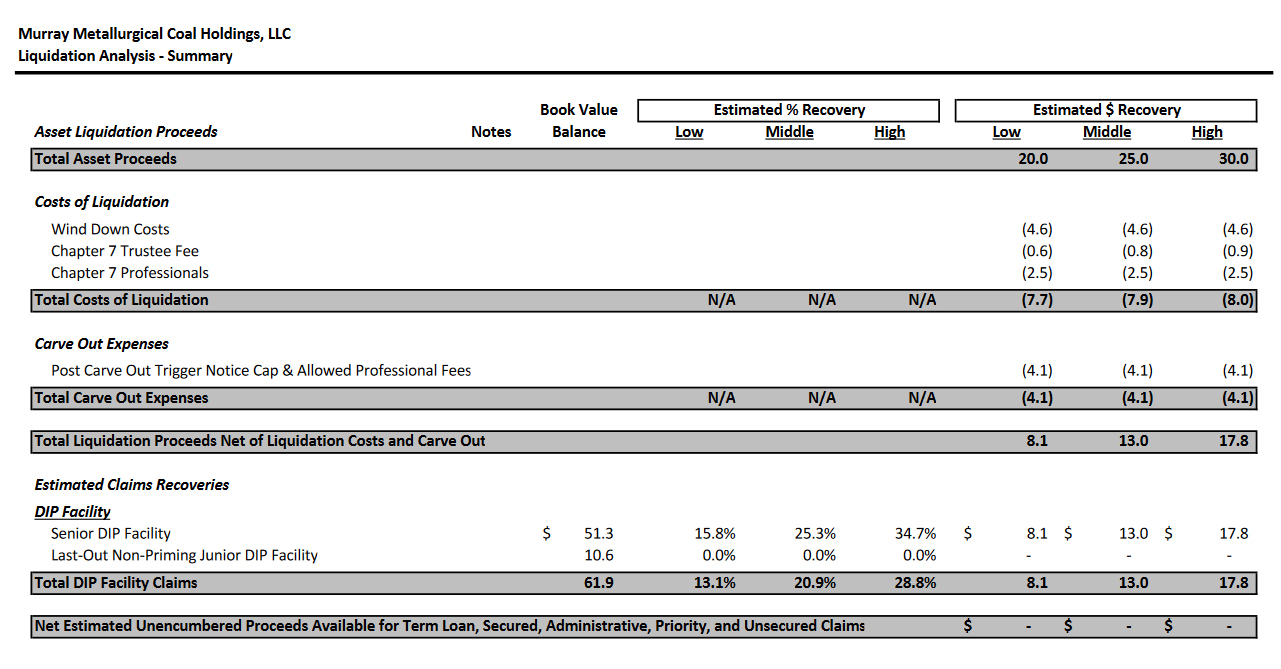 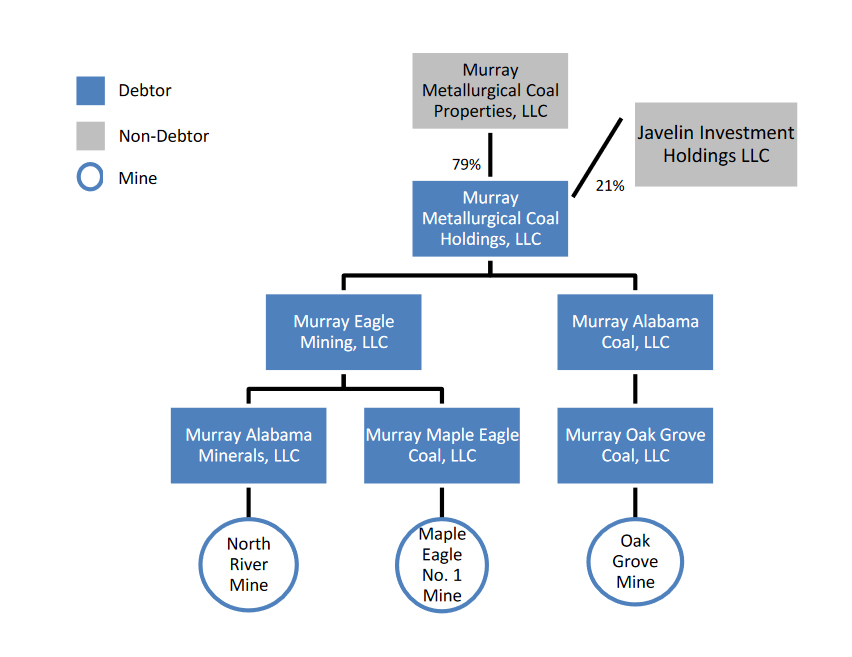 FN1 On October 29, 2019, Murray Energy Holdings Co. and 98 affiliated debtors (collectively, the "MEC" or Murray Energy" cases") filed for Chapter 11 protection with the U.S. Bankruptcy Court in the Southern District of Ohio, lead case number 19-56885. The present six MET Holdings cases are to be administered separately from the MEC cases, with the MET Holdings Debtors arguing that: "There are a number of differences between these chapter 11 cases and the MEC Chapter 11 Cases, which warrant keeping them separated from the MEC Chapter 11 Cases, including: (i) none of the Debtors are borrowers or guarantors on the debtor in possession financing obligations in the MEC Chapter 11 Cases; (ii) the Debtors are primarily engaged in mining, extraction, and processing of metallurgical coal, whereas the MEC Debtors are primarily engaged in the mining, extraction, and processing of thermal coal, and each of these commodities is subject to different market pressures; (iii) the lenders to the Debtors under the Take-Back Facility are different from the lenders to the MEC Debtors; and (iv) as a result of the Take-Back Facility and other claims against the assets of the Debtors (including obligations to Javelin Global Commodities (UK) LTD ('Javelin Global')), there was perceived to be little to no equity value in the Debtors that would flow up to the MEC Debtors, although there was a belief that the Debtors could survive as a going concern without the need for a chapter 11 filing."