December 6, 2022 – The Debtors and Bond Trustee UMB Bank, N.A. (“UMB” and together with the Debtors, the “Plan Sponsors”) filed a First Amended Plan of Reorganization and a related Disclosure Statement [Docket Nos. 869 and 870, respectively] and separately filed redline showing changes to the versions filed on November 2, 2022 [Docket No. 871].

As discussed further below, this Plan brings together key stakeholders who had otherwise filed competing Plans in early November, with the centerpiece of this now collective, post-settlement effort being the sale of the Debtors' Dallas Fort Worth retirement facility. Further to the going concern sale, the retirement facility will drop its entrance fee business model in favor of a rental business model.

On April 14, 2022, Northwest Senior Housing Corporation and one affiliated Debtor (dba Edgemere, “Northwest Senior Housing” or the “Debtors”) filed for Chapter 11 protection noteing estimated assets between $100.0mn and $500.0mn; and estimated liabilities between $100.0mn and $500.0mn. At filing, the Debtors, a "luxury" retirement community serving the Dallas Fort Worth area, cited "turnover at all levels of the Edgemere organization" and the fact that the "senior living industry has been hit especially hard" by the COVID-19 pandemic. Compounding those issues was a highly competitive business environment (10 CCRC's, including two luxury facilities, within 10 miles of the Debtors' community). Without providing too much clarity on their perspective, the Debtors' view (and that of their prospective purchaser, Lapis Advisers LP) is that an entrance fee model can no longer work at this facility (existing contracts will be rejected); although this presumably stems from their recent struggle to maintain occupancy rates in respect of both independent living (IL) and assisted living (AL) units and the need to have residents contribute more in the way of traditionally higher "pay as you go" rental fees (see more in "Events Leading…" below).

On June 23rd, the Court issued a final order authorizing the Debtors to access the $8.1mn balance of what is in total $10.1mn DIP financing being provided by UMB, with the Debtor having received access to a first $2.0mn tranche on April 20th.

The Debtors filed initial versions of their Chapter 11 Plan of Reorganization and Disclosure Statement on August 3rd [Docket Nos. 508 and 509, respectively].

On November 2, 2022, UMB filed a bidding procedures motion requesting (i) approval of bidding procedures in relation to the sale of substantially all of the Debtors’ assets, (ii) authority to enter into stalking horse arrangements with Lapis Advisers LP affilate Bay 9 Holdings LLC (the “Stalking Horse Bidder,” $48.5mn cash openeing bid) and (iii) approval of a proposed auction/sale timetable culminating in an auction on December 28, 2022 and a sale hearing on January 10, 2023 [Docket No. 755].

Thereafter, settlement discussions among the Initial Plan Sponsors, the Debtors, Lifespace and the Committee resulted in the filing of the Plan and this Disclosure Statement, as further described herein. The overarching goal of the Plan is to ensure the ongoing viability of the Community such that it can successfully operate for the remainder of the Ground Lease, all while meeting Resident expectations with respect to quality of service and care. To accomplish this goal, the Plan will implement the Sale Transaction, pursuant to which substantially all the Debtors’ assets will be sold to a Purchaser who will continue running the Community as a going concern….

Consultants have concluded that the Community cannot continue to operate solely as an entrance fee community. An entrance fee model, in the opinion of such consultants, is not feasible and will exacerbate the financial struggles of Edgemere. Accordingly, the Asset Purchase Agreement contemplates the conversion of the Community to a rental model. Pursuant to the Asset Purchase Agreement, all entrance-fee Residency Agreements will be rejected and, subject to regulatory approvals and/or requirements all Current Residents will be offered a new monthly rental agreement which shall provide similar services to Current Residents as provided prior to the Closing Date.

The Plan will also establish a Litigation Trust, into which all assets of the Debtors not purchased through the Sale Transaction, including the Landlord Litigation and other Retained Causes of Action, will be transferred. The Litigation Trustee will prosecute and liquidate the Litigation Trust Assets, with the proceeds from such liquidation distributed on a Pro Rata basis to Holders of Allowed General Unsecured Claims, pursuant to the terms and conditions of the Plan and the Litigation Trust Agreement, which will be included in the Plan Supplement.”

The Disclosure Statement further states, “The Plan contemplates the sale of substantially all of the property in the Estates to a Purchaser, free and clear of all Liens, Claims, charges, or other encumbrances, pursuant to the terms of an Asset Purchase Agreement. The proposed sale process will subject the initial Purchaser’s bid of $48.5 million, subject to certain adjustments set forth in the Asset Purchase Agreement, to higher and better bids, with an Auction to be conducted if a competing qualified bid is received. The Asset Purchase Agreement contemplates the rejection of all Residency Agreements, provided that any Purchaser shall offer to all Current Residents a monthly rental agreement which, subject to regulatory approvals and/or requirements, shall provide similar services to Current Residents as provided prior to the Closing Date.

Upon the Closing of the Sale Transaction, all Net Sale Proceeds therefrom, after payments required under the Plan to pay any unpaid Allowed Administrative Claims, Priority Tax Claims, Professional Claims, DIP Facility Claims, the Dallas County Claim the Diminution Claim and the U.S. Trustee Fees, shall be paid to the Trustee for Distribution to holders of the Original Bonds, pursuant to the terms of the Original Bond Documents.”

The following is an amended/updated summary of classes, claims, voting rights and expected recoveries showing highlighted changes (defined terms are as defined in the Plan and/or Disclosure Statement, also see Liquidation Analysis below):

The Amended Disclosure Statement [Docket No. 870] attaches the below exhibits:

In a declaration in support of the Chapter 11 filing (the “Harshfield Declaration”), Nick Harshfield, the Debtors’ Director, Vice Chair and Treasurer, detailed the events leading to Northwest Senior Housing’s Chapter 11 filing. The Harshfield Declaration provides: “Turnover at all levels of the Edgemere organization has taken place over the last five years. Edgemere has had three different managers, five different executive directors, three reorganizations of its sales and marketing team, new department heads for dining, nursing, plant operations and resident services, as well as turnover in dining and nursing staff. In addition, in 2017, Edgemere’s former Executive Director moved to a different CCRC as its plans to open were being developed and implemented and many employees followed him there as his new CCRC prepared to open; in July 2021, he returned to Edgemere in the Executive Director role.

The COVID-19 pandemic that began in the first quarter of 2020, severely disrupted most industries in our nation, and the senior living industry has been hit especially hard. The Residents that the Debtors care for are the population at the greatest risk of this virus, and the Debtors are committed to the health and safety of all their Residents and staff. The Debtors incurred significant costs as a direct result of the COVID-19 pandemic, including but not limited to those necessary to retain qualified staff. Expenses have increased due to dramatically higher labor costs and costs for additional personal protective equipment. Labor pressures not only persist but appear to be worsening.

Compared to its competitors, Edgemere offers a higher-end-experience with larger units and beautiful grounds, and, accordingly, is priced higher than its competitors. Edgemere’s entrance fees range between $345,000 for the smallest one-bedroom unit to $1,454,000 for the largest three-bedroom unit. The average CCRC entrance fee in the Dallas market was $435,254. Edgemere’s monthly service fees start at approximately $4,000 per month, where other CCRC’s service fees typically fall between $2,000 and $3,000 per month in the Dallas market.

The global COVID-19 Pandemic put substantial pressure on Edgemere, drove occupancy down, and drained cash, as revenues declined and refunds paid exceeded Entrance Fees collected. IL revenue is down 9.3% from 2020 driven by declining occupancy, despite increases in Monthly Service Fees of 1% of January 1, 2021, and 3% as of January 1, 2022. Edgemere’s IL occupancy rate dropped from 92% in 2018 to 73% in April 2021. Between 2017 and 2020, IL sales declined from fifty-five (55), to forty-one (41), to twenty-seven (27) to seventeen (17). IL sales rose to forty-eight (48) in 2021, but sales leads have plummeted due to negative publicity, and to date, there have only been three (3) IL sales in 2022. Further, many Residents are choosing to remain in their IL units instead of moving into AL units and are opting to hire home health aides instead of moving to The Plaza.

Negotiations with the Landlord

Edgemere is developed on land subject to the Ground Lease, which will expire in 2054. The pressures of the declining occupancy driven by the COVID-19 pandemic, caused Edgemere to breach certain covenants and, therefore, events of default were triggered under the Bonds and the Lease. The Landlord’s bad faith actions over the last year have substantially exacerbated those factors.

On December 28, 2021, counsel for the Trustee circulated a draft extension of the Forbearance through March 31, 2022 as the Parties had previously discussed. The Landlord did not respond. After several attempts to contact the Landlord through counsel, a conference call was held with Landlord’s counsel on January 7, 2022, where counsel for the Landlord stated that his client was considering whether or not they would extend the Forbearance. On January 12, 2022, counsel for Edgemere set forth the position that among other things, the Landlord had acted in bad faith.

On January 14, 2022, the new counsel for the Landlord informed Edgemere that its client would not consider a forbearance extension, would not sell the real property and would not negotiate the terms of the Ground Lease. At or about the same time an individual purporting to be a consultant for the Landlord reached out to at least one Resident of the Community, and subsequently began communicating with the press about Edgemere.

Liquidation Analysis (See Exhibit 2 of Docket No. 870 for notes) 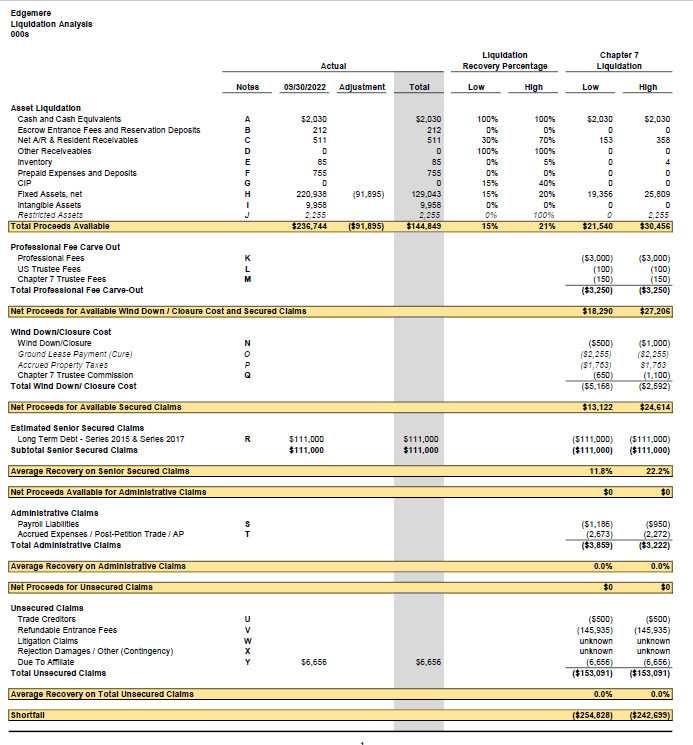 According to the Debtors: “Edgemere opened its doors in 2001, and immediately set a new standard for luxury senior living retirement communities in North Texas. It was the first Life Care community to land in Dallas and, for almost a generation now, it’s offered residents an unparalleled set of benefits.

Edgemere’s drive to deliver a top-tier experience is reflective of our vision for excellence in senior living. It’s a vision shared across all 15 members of the Lifespace Communities® family. Together, our missions remain focused on one thing — celebrating the lives of seniors in everything we do. This simple notion has led Lifespace and its multistate system of senior living communities to experience decades of success and financial stability and, even more importantly, earn the trust of thousands of team members, residents and their families.

Additionally, Edgemere’s status as a 501(c)(3) not-for-profit organization means all revenues are reinvested into the community. This not only fuels the development of better services, amenities and opportunities for our residents, but also ensures that in the event of a financial hardship that’s no fault of your own, you won’t be asked to leave the community." 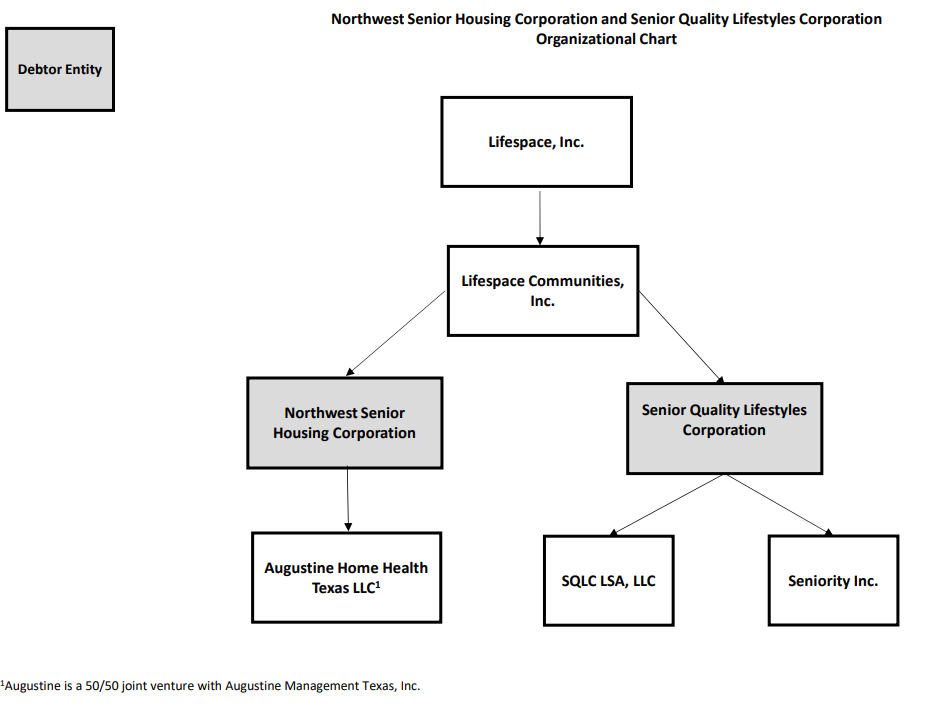