The Koza Declaration (defined below) provides: "Ultimately, the Company, unable to fully drive negotiations out-of-court, has commenced these chapter 11 cases to preserve its assets and utilize the protections and tools of chapter 11 to optimize its operations and its restaurant footprint."

The objectives of the RSA include: “(i) a substantially deleveraged capital structure, (ii) a potential substantial exit capital infusion to revitalize the Debtors’ Pizza Hut restaurants, (iii) the potential to realize a value-maximizing sale of some or all of the Debtors’ Wendy’s restaurants, and (iv) a smaller, more profitable footprint of restaurants, the RSA provides that the Consenting Creditors…must support confirmation of the Pre-Negotiated Plan.

The RSA provides for certain milestones that contemplate a sale process for the Company’s Wendy’s business as well as a potential sale of the Company’s Pizza Hut business, while also providing for the flexibility to effectuate a standalone restructuring around the two businesses. The Plan Term Sheet sets forth the terms of the Pre-Negotiated Plan, which contemplates a new money rights offering (the ‘Rights Offering’) and a new first lien term loan credit facility in the event that certain assets of the Wendy’s business are retained by the Reorganized Parent. Pursuant to the Rights Offering, the First Lien Lenders will be distributed subscription rights to purchase newly issued shares of convertible participating preferred stock issued by the Reorganized Parent. The Rights Offering will be fully backstopped by certain members of the Ad Hoc Priority/1L Group, which will be memorialized in a backstop commitment agreement.

The RSA commits the Debtors to immediately begin a marketing process in respect of their Wendy's restaurant assets, with the assets to be marketed "on a single, going-concern basis as well as individual, market-based transactions."

In a declaration in support of the Chapter 11 filing (the “Koza Declaration”), Eric Koza, the Debtors’ Chief Restructuring Officer, detailed the events leading to NPC’s Chapter 11 filing. Beyond the recent and across-the-board impact of the COVID-19 pandemic, the Koza Declaration focuses on two very different restaurant groups, with Pizza Hut operations suffering from the overall decline of the Pizza Hut brand and a difficult relationship with the "Pizza Hut Franchisor," an affiliate of Yum! Brands (the product of a 1997 spin-off of PepsiCo's KFC, Pizza Hut and Taco Bell restaurant groups); while the Wendy's restaurants, and the Debtors' relationship with the Wendy's Franchisor (Quality Is Our Recipe, LLC, an affiliate of The Wendy's Company) has been strong. The Debtors ascribe the difference in operational performances between the two groups to the overall health of the two brands: "the performance of the Company’s Pizza Hut and Wendy’s franchised restaurants is reflective of the respective brand performances—mirroring the respective brand performance."

The Koza Declaration provides: “In recent years, the Company has faced headwinds and unfavorable trends that continue to exert negative pressure on its businesses, including: political influences driving uncertainties on trade and commodities, drastic shifts in the labor market increasing pressure on hiring wages; a consistently downward trending performance of the Pizza Hut business; changes in the Pizza Hut brand strategies affecting not only the Company but also other franchisee businesses within the Pizza Hut restaurant system; and the recent and ongoing COVID-19 Pandemic and its impact on the QSR and fast food industry. This steady decline in Pizza Hut brand performance has resulted in a dramatic increase in the Company’s leverage over the past two years. As discussed further below, despite the Company’s various initiatives and efforts, the combination of these challenges impacted the Company’s liquidity and profitability and thus its ability to sufficiently overcome these challenges."

Drilling down on brand (and franchisor) weakness: "The Pizza Hut brand has in recent years faced a deteriorating brand image in light of the pervasiveness of pizza restaurants, the success of competing brands to carve out a particular market within the pizza industry, and the reluctance by the Pizza Hut Franchisor to invest in brand development. The Pizza Hut brand continues year after year to lose market share to its national competitors. With consumer behavior shifting towards more delivery than dine-in, Pizza Hut’s competitors such as Domino’s and Papa John’s have continued to evolve their respective Delco-like models with better technology or more compelling price and product offerings, whereas Pizza Hut’s lack of sales growth and related cash flow creation has prevented many franchisees, including the Company, from transitioning the balance of its dine-in estate from standalone assets that cost more to maintain and are less profitable.

Further, in rural and suburban areas, where a majority of the “red roof” dine-in restaurants are located, the lack of national advertising relevancy has eroded the recognition of the Pizza Hut brand.

Deteriorating brand recognition has been further exacerbated by decreased menu innovation and the lack of a clear, long-term strategy by the Pizza Hut Franchisor to address the brand issues to provide a clear and differentiated identity. Given the lack of product variability, the Pizza Hut brand has increasingly utilized and promoted, to the detriment of the franchisees, price discounts to increase sales, which somewhat helped mitigate further traffic loss but eroded profitability to franchisees due to the associated increased food and labor costs. However, recently, Yum! has implemented changes in the executive leadership at the Pizza Hut brand. The new leadership team has communicated their intent to move away from the EDLP Marketing Strategy…to improve store-level profitability. These changes are in their infancy but, nonetheless, are strategic shifts that are supported by the Company and the broader franchisee network."

The obviously difficult franchisee/franchisor relationship, and finger-pointing as to operational failures leading to a liquidity crunch, will have clearly impacted negotiations involving the Debtors, franchisors and RSA parties, with the Pizza Hut Franchisor declining to extend a forbearance agreement (again) past June 30th, a step that the Debtors characterize as dooming a possible out-of-court restructuring and pushing them into Chapter 11.

The Koza Declaration provides: “In January of 2020, due to its rapidly deteriorating liquidity position, the Company had no choice but to seek emergency financing from its First Lien Lenders…for an infusion of working capital. While the terms of the emergency financing contained certain milestones toward a broader balance sheet restructuring, it importantly provided the Company with $35 million of much needed liquidity runway to continue engaging with the Pizza Hut Franchisor on a global restructuring deal supported by the First Lien Lenders. To that end, contemporaneously with—and as a condition to—the financing, the Company negotiated a forbearance agreement with the Pizza Hut Franchisor to allow restructuring discussions to progress without any potential franchise agreement defaults hanging over the Company.

….the Company worked for months leading up to the commencement of these chapter 11 cases—in close communication with the Pizza Hut Franchisor—on detailed business plans, information sharing, diligence meetings, and a comprehensive list of “asks” to build a mutually beneficial partnership of profitability and growth. Yet, despite the Company’s efforts and the Ad Hoc Priority/1L Group’s support, the Company was ultimately unable to reach a deal with the Pizza Hut Franchisor in advance of the June 30th expiration of the PH Forbearance Agreement (defined below), but the Company expects to continue those discussions in these chapter 11 cases."

As of the Petition date, the Debtors’ prepetition capital structure consisted of approximately $903.0mn in total funded debt, made up of:

With their headquarters located in Leawood, Kansas, and a shared services center located in Pittsburg, Kansas, the Company has a total of approximately 7,500 full time employees and approximately 28,500 part-time employees, and operate in 30 states and District of Columbia. As franchisees of the Pizza Hut and Wendy’s brand, the Company’s performance is inextricably tied to the overall performance of each brand, and although the Company continually seeks to optimize its businesses as discussed more fully below, there are certain headwinds facing the broader Pizza Hut system that NPC cannot directly combat without brand support.

As of the Petition Date, the Debtors operate 1,227 Pizza Hut units in 27 states, with significant presence in the Midwest, South, and Southeast.

As of the Petition Date, the Debtors operate 393 Wendy’s restaurants in eight states and the District of Columbia. 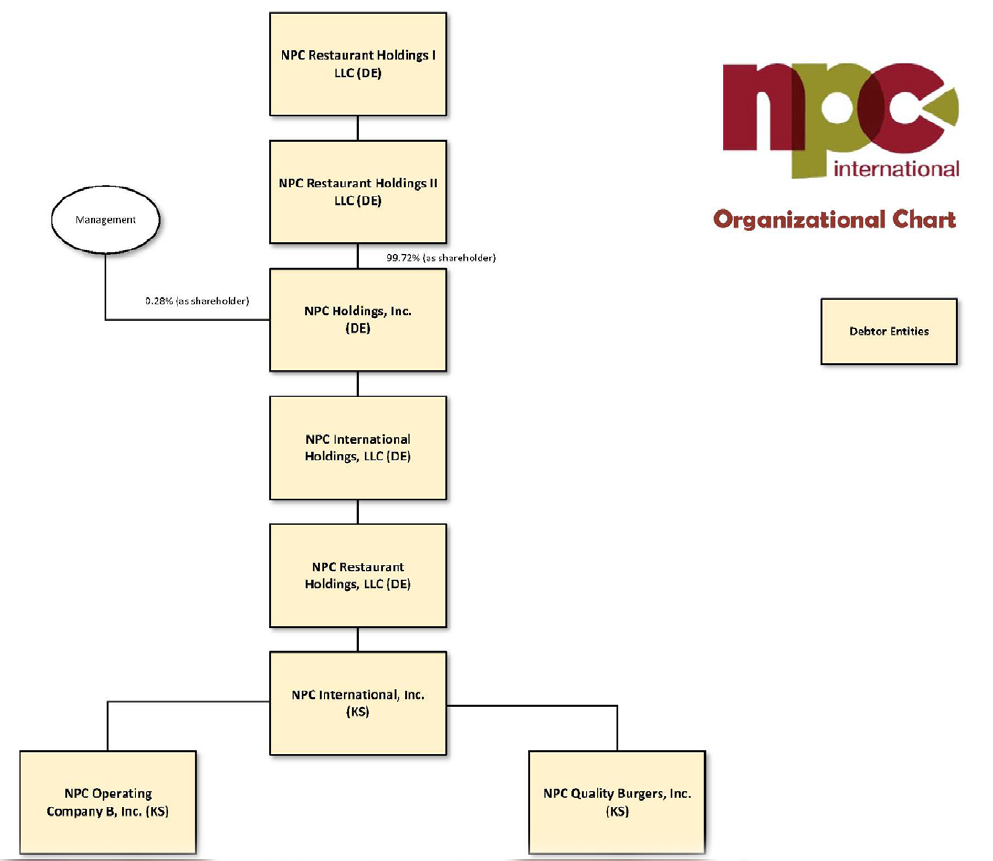