November 10, 2020 – The Court hearing the Oasis Petroleum cases issued an order confirming the Debtors' Prepackaged Chapter 11 Plan of Reorganization [Docket No. 317].  NB: A corrected Plan confirmation order was issued at Docket No. 335 and reflects changes submitted by the Debtors on November 10th [Docket No. 319, which attached a blackline]. The changes relate the Mirada claims and the final DIP financing order.

On September 30, 2020, Oasis Petroleum Inc. and eight affiliated Debtors (NASDAQ: OAS; “Oasis Petroleum” or the “Debtors”) filed for Chapter 11 protection with the U.S. Bankruptcy Court in the Southern District of Texas, lead case number 20-34771. At filing, the Debtors, an independent exploration and production company focused on assets in the Williston and Delaware Basins, noted estimated assets between $1.0bn and $10.0bn; and estimated liabilities between $1.0bn and $10.0bn (including $2.265bn of funded debt).

In a press release heralding the Plan's confirmation, the Debtors noted: “The Plan was approved by all three of the voting classes of holders of impaired claims and interests entitled to vote on the Plan. The Company expects to successfully complete its financial restructuring and emerge from Chapter 11 within 30 days.

The Debtors' memorandum of law in support of Plan confirmation (the "Memorandum") [Docket No. 290] provides the Debtors’ pre-confirmation hearing assessment of where they stand: “The Debtors are poised to emerge from chapter 11 before the end of November, less than two months after the Petition Date, and confirmation of the Plan represents the final step necessary for the Debtors to complete their reorganization. The Debtors will emerge with a healthier capital structure for the benefit of all stakeholders, including employees, customers, creditors, and equity holders.

After months of arm’s-length, multi-party negotiations, the Debtors reached an agreement on the terms of a comprehensive, value-maximizing restructuring, embodied in the Restructuring Support Agreement, with holders of 100 percent of RBL Claims and approximately 59 percent of the Notes Claims. Through the restructuring, the Debtors will eliminate approximately $1.8 billion in prepetition debt obligations, while maintaining access to ample liquidity to fund the Reorganized Debtors with a new, fully committed reserve-based revolving exit facility in an aggregate amount up to $1.5 billion (the 'Exit Facility') and an initial borrowing base of approximately $575 million, the proceeds of which will be used to refinance amounts outstanding under the DIP Facility and any remaining prepetition RBL Claims outstanding on the Effective Date.

The Plan also leaves administrative, priority, and general unsecured creditors, including trade creditors, unimpaired. The Plan also provides equity holders with an opportunity to realize a recovery if the market rebounds sufficiently. Moreover, the Plan implements the Mirada Settlement, which resolves years of litigation and claims for damages in excess of $100 million."

The Debtors' Disclosure Statement provides: "Key terms of the Debtors’ restructuring support agreement (the 'RSA') include:

On November 4, 2020, the Debtors' claims agent notified the Court of Plan voting results [Docket No. 269], which were as follows:

The Debtors’ Disclosure Statement details the events leading to the Chapter 11 filing. The story is of course a familiar one (ie, commodity prices, Saudi Arabia/Russia price war and COVID-19), with pain especially felt at independent O&Gs, but this variation adds an interesting wrinkle usually not discussed, the saturation of oil storage facilities and the need for well shut-ins.

The Disclosure Statement states: "The difficulties initially faced in 2020 by the Debtors are consistent with those faced industry-wide. Volatile market conditions have challenged oil and gas companies and others for years. From January 1, 2014 until April 20, 2020, WTI crude oil prices ranged from a high of $107.26 per barrel to a low of -$37.63 per barrel; during that same period Henry Hub natural gas prices ranged from a high of $6.15 per mmbtu to a low of $1.55 per mmbtu. As of the Petition Date, and due in part to the combined impact of the COVID- 19 pandemic and the oil price war between the Kingdom of Saudi Arabia and Russia, WTI was priced at $40.37 per barrel and natural gas was priced at $2.76 per mmbtu.

In early 2020, the initial spread of COVID-19 caused decreased factory output and transportation demand, resulting in a decline in energy prices. To address this, OPEC, led by the Kingdom of Saudi Arabia, called for additional cuts in oil production, subject to agreement by Russia. However, those initial efforts faltered, and the parties failed to reach an agreement as to production levels. Instead, both the Kingdom of Saudi Arabia and Russia announced that they would increase, rather than decrease, production, resulting in surplus supply amidst already decreasing demand for energy. Meanwhile, the COVID-19 pandemic continued and continues to spread, causing governments across the world to institute strict public health and safety measures, including stay-at-home orders that have further decreased energy demand.

The corresponding effects on energy markets have been severe. In March 2020, oil prices plummeted to near $20 per barrel, which was the lowest in nearly twenty years until April 20, 2020, when the WTI crude oil price for May contracts settled at a negative price for the first time in history.

The effect of recent events on companies in the oil and gas industry (not just E&P companies) has been undeniable. However, independent oil and gas companies such as Oasis have been especially hard- hit, as their revenues are primarily generated from the sale of oil, natural gas, and NGLs. Making matters worse, the drastic decrease in demand and corresponding over-supply of oil, natural gas and NGLs has led to an unprecedented storage shortage. Oil and gas companies are left with no option but to consider well shut-ins and other production measures to address the impending storage issue."

The Disclosure Statement [Docket No. 25] attached the following exhibits:

The Debtors filed Plan Supplements at Docket Nos. 263, 291 and 300 which attached the following documents:

According to the Debtors: “Oasis is an independent exploration and production company focused on the acquisition and development of onshore, unconventional crude oil and natural gas resources in the United States." 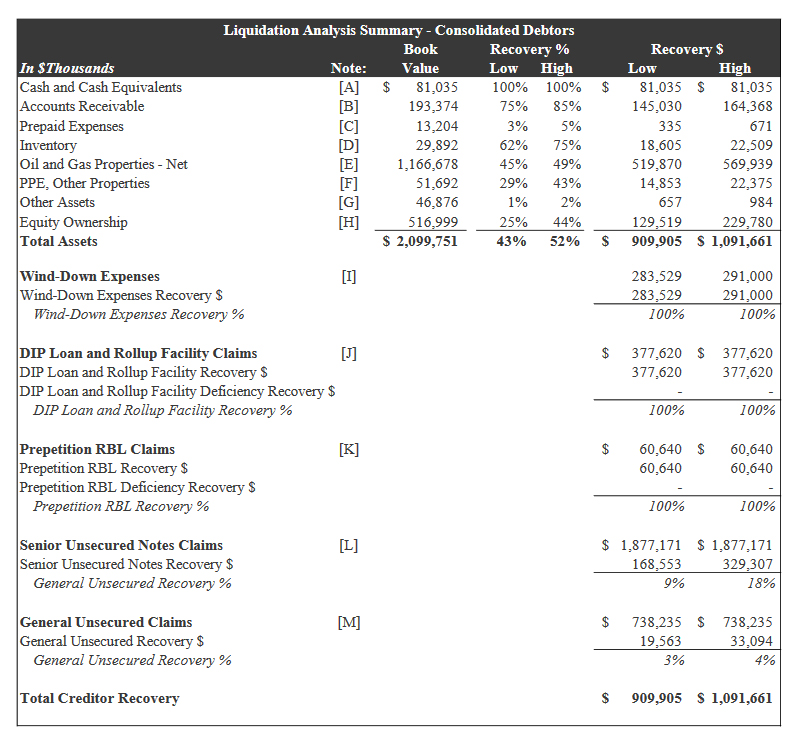