In a press release announcing the filing, the Debtors advised that they had “reached an agreement with its senior secured lenders on the terms of a comprehensive financial restructuring plan, which will deleverage the Company's balance sheet. This agreement has support from 100% of the holders of its senior secured notes as well as its revolving credit facility lenders.

Upon implementation, this agreement will give the Company the financial foundation necessary to resume normal-course operations following the COVID-19 outbreak, realize the full benefit of its cost-savings initiatives and strategic investments recently executed, and continue to serve its customers as a leading fully-integrated provider of die cast aluminum, magnesium and zinc components.

As a result of its noteholder and lender support, the Company expects to complete the process in the second quarter of 2020 – emerging as a financially stronger company that is well-positioned to succeed in the post-COVID-19 environment."

Under the terms of the proposed prepackaged plan, the Company will convert its existing senior secured notes into 100% of the equity in the reorganized Company."

The Prepackaged Plan provides that:

(b) the Prepetition Noteholders will each receive their pro rata share of (i) 100% of the equity issued by a new limited liability company created to own all of the outstanding equity interests of reorganized Pace Industries, LLC as of the Effective Date, subject to dilution by new warrants to be issued to the Debtors’ postpetition lenders and equity that may be issued in connection with a management incentive plan following the Effective Date and (ii) a new junior term loan facility. The Prepackaged Plan also contemplates that the Debtors’ postpetition term loan financing facility will be refinanced and paid in full through the proceeds of a new term loan exit facility and the issuance of new warrants to purchase, in the aggregate, 51% of the equity interests of reorganized Pace Industries, LLC.

The press release states: "The Company's senior secured noteholders, along with its existing revolving credit lenders, will provide commitments for up to $175 million in debtor-in-possession financing to help ensure that the Company can meet its commitments during the process." The DIP financing, which we cover separately is comprised of (i) a $125.0mn senior secured super-priority asset-based revolving credit facility and (ii) a $50.0mn senior secured, super-priority multi-draw term loan facility, of which $21.0mn shall be available upon entry of an interim DIP order and $29.0mn shall be available upon entry of a final DIP order.

As of the Petition date, the Debtors’ capital structure includes over $324.2mn in outstanding debt, consisting of (a) approximately $92.1mnn outstanding under their prepetition ABL facility and  (b) approximately $232.1mn in aggregate principal amount of their senior secured notes due 2020. The senior notes mature on July 10, 2020 and bear a base interest rate of LIBOR plus 8.25%, plus additional PIK interest of 2.5%.

The following is a summary of classes, claims, voting rights, and expected recoveries (defined terms are as defined in the Plan and/or Disclosure Statement):

The Potter Declaration states: "In the summer of 2018, Pace engaged an investment banking firm to raise new equity. The Company sought additional liquidity primarily to meet its commitments to launch its new automotive programs and fund associated working capital needs. By the spring of 2019, efforts to complete an equity raise had failed, and Pace began considering options to address its increased debtload and upcoming maturities under its Prepetition ABL Facility and Prepetition Term Loan Agreement. The Company ultimately determined that a sale or complete recapitalization presented the best path to maximize value for all of its creditors and other stakeholders. Accordingly, the Company engaged an investment banking firm to commence a marketing process. The investment banking firm reached out to 37 potential buyers and provided confidential evaluation materials to 20 of those parties. Based on those evaluation materials, four potential buyers submitted indications of interest to acquire the Company.

In January 2020, however, following disappointing sales in the last quarter 2019, the Company postponed its sale process. The decrease in sales was driven by softened demand in the lighting, barbecue grill and appliance markets and lower automotive industry sales due to in part to a 40-day strike by 48,000 General Motors employees. Additionally, the Companies profitability was negatively impacted by production inefficiencies incurred in the launch of clutch housings and other automotive parts on the timeline anticipated under its new contracts….Following months of hard-fought, arm’s length negotiations between the Debtors and their core lender constituencies, the parties reached agreement on the framework for the Proposed Restructuring Transaction, which the Debtors have determined is the most value-maximizing transaction available to the Company. In March 2020, the parties were negotiating the terms of the Proposed Restructuring Transaction, the Company’s liquidity situation became dire due to the spread of the COVID-19 pandemic in the United States, which resulted in, among other things, the issuance of stay-at-home orders by the governments of certain states in which the Company operates. The Company has had to temporarily close down its Harrison, PCG, Airo and Grafton Divisions after determining that these divisions constitute non-essential businesses under the applicable government orders. Given the negative effects of the Company’s temporary partial shutdown on its revenues, implementing a transaction that will allow the Company to maximize its value for the benefit of its creditors and other stakeholders is now more urgent than ever."

Liquidation Analysis (see Exhibit B to the Disclosure Statement for notes) 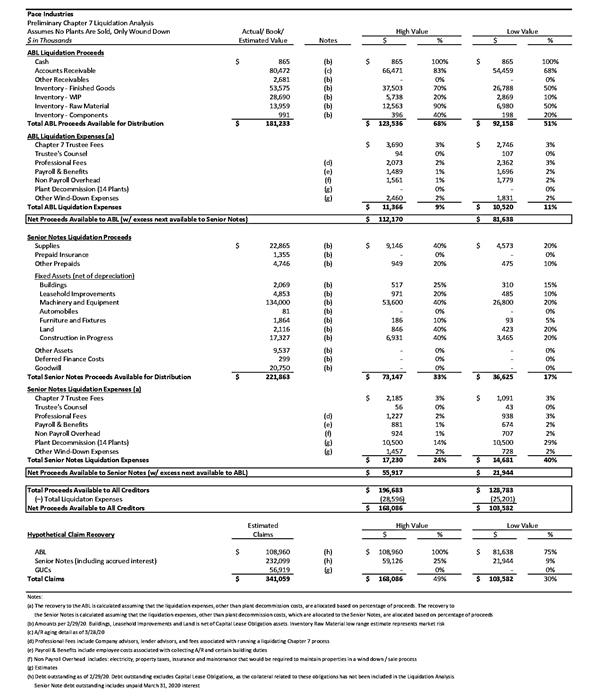 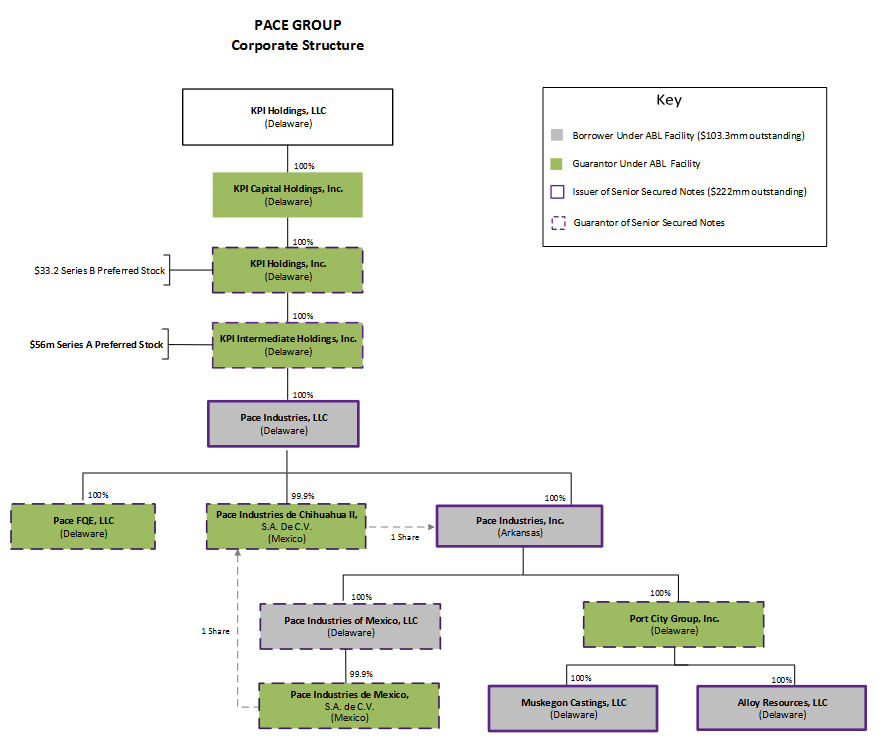 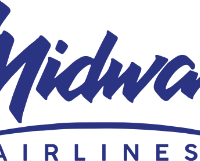