Prior to filing for bankruptcy protection, the Debtors received a bridge loan from an affiliate of Sortis Holdings, Inc. ("Sortis") which has also agreed to provide the Debtors with debtor-in-possession ("DIP") financing. sortis had been contacted by the Debtors' investment banker in connection with a possible out-of-court sale transaction, but declined to pursue an acquisition in that out-of-court context.

Sortis recently formed "The Sortis Rescue Fund…to capitalize on the dislocation and market stress caused by the COVID-19 pandemic and subsequent economic fallout. The current recession is proving to be deep and intense enough to create situational distressed opportunities, particularly in hospitality, retail, office, and select operating businesses. The SRF does not make broad market acquisitions but rather rescues and acquires specifically targeted distressed assets in situations with strong value enhancement."

The Galligan Declaration (defined below) [Docket No. 15] states that the debtors have sought bankruptcy protection to "…maintain the value of their businesses by averting foreclosure [see more on the Crowd Out foreclosure below] to enable the Debtors to reorganize and restructure their liabilities as a going concern….

The December 10 Loan Agreement was entered into with the expectation (but not the requirement) that the Debtors would enter into a postpetition loan with the Prepetition Lender or one of its affiliates to be approved by the Bankruptcy Court on interim and final bases, with the goal of a filing and confirming a combined plan by April 30, 2021 that will allow the Company to strengthen its balance sheets, and put it into a position to move forward successfully once the restrictions on operating its venues have been lifted."

In a declaration in support of the Chapter 11 filing (the “Galligan Declaration”), Stacy J. Galligan, the Debtors’ Director of Operations and Finance, detailed the events leading to PBS’s Chapter 11 filing. The Galligan Declaration provides: “ On or about May 31, 2018, Brandco and CrowdOut Capital LLC ('Crowd Out') entered into a loan agreement (as subsequently amended, the 'Crowd Out Promissory Note') by and through which Crowd Out loaned $20,000,000 to Brandco, The obligations due under the Crowd Out Promissory Note were guaranteed by certain of the Operating Companies and secured by the PBS, Inc.’s interest in Brandco’s shares or membership interests pursuant to a certain Security Agreement Pledge dated May 31, 2018 (the 'Crowd Out Pledge Agreement').

In a now too-familiar tale, the Debtors’ businesses were immediately and significantly adversely affected by COVID-19. On March 14, 2020, the country was realizing the extent which COVID-19 would affect the hospitality, restaurant and travel industries, those businesses were all focused on preserving their businesses. In that context, Cracker Barrel notified the Debtors and Crowd Out that it had not and would not execute a guaranty as required under the Foreclosure Agreement…On March 16, 2020, Crowd Out issued a Notice of Forbearance Termination Event, Notice of Acceleration and Reservation of Rights to the Debtors and Cracker Barrel, and on March 20, 2020, Crowd Out issued a notice of intent to sell the collateral. In its March 20, 2020 notice, Crowd Out stated that, unless it received payment in full by 5:00 p.m. CDT on March 24, 2020 for the entire unpaid principal balance of the indebtedness including all interest and other sums due by Brandco under the Crowd Out Promissory Note and related agreements, Crowd Out would the process to sell the membership interests of Brandco held by PBS, Inc., including by immediately providing notice of the sale to the public and those parties entitled to receive notice pursuant to the Uniform Commercial Code of New York and by contacting potential buyers.

On August 17, 2020, Crowd Out, putatively acting its capacity as a secured creditor with authority pursuant to the Pledge Agreement, executed a purported Joint Written Consent of the Member and Managers of Brandco (the 'August 17 Written Consent'). By the August 17 Written Consent, Crowd Out purported to appoint John W. Haywood as Chief Executive Officer of Brandco, effective August 14, 2020. Further, by the August 17 Written Consent, Crowd Out purported to authorize the retention of PJ Solomon Securities, LLC ('PJ Solomon') on an exclusive basis as the Company’s investment banker and/or placement agent. The Debtors understand that Solomon conducted a thorough search for interested purchasers. Sortis Holdings, Inc. ('Sortis'), an affiliate of Prepetition Lender and the DIP Lender (as defined below), was one of the parties contacted by PJ Solomon as part of the marketing process. Unfortunately, PJ Solomon could not find a path forward for the sale the assets of the Debtors and certain non-debtors to Sortis, or any other party through its marketing process.

On December 10, 2020, Crowd Out issued a Notice of Public Disposition Of Collateral Under Uniform Commercial Code by and through which it stated it intended to offer for sale the following collateral at public sale to be held on December 28, 2020…:

The Debtors’ currently owe approximately $20 million to Crowd Out. Such amounts continue to accrue interest at the default rate due under the applicable loan documents.”

In a Form 8-K filed on March 25, 2020, Cracker Barrel Old Country Store, Inc. announced that PBS Holdco, which owns and operates food, beverage and entertainment establishments under the name Punch Bowl Social, suspended all operations at each of its 19 locations and laid off substantially all restaurant and corporate employees due to COVID-19 pandemic. In July 2019, the Company purchased approximately 58.6% of the economic ownership interest in PBS Holdco. At January 31, 2020, Cracker Barrel valued its equity investment in PBS Holdco at approximately $79.5 million. Additionally, in connection with its equity investment, the Company agreed to assume certain unsecured indebtedness of PBS Holdco at closing and to fund additional capital to PBS Holdco thereafter in return for additional unsecured indebtedness. As of March 24, 2020, the Company held unsecured indebtedness of PBS Holdco with a total principal value of $50.4 million.

On March 20, 2020, the primary lender under PBS’ secured credit facility provided notice to PBS Holdco and to the Company declaring a default under its secured credit facility and stating the lender’s intention to foreclose on its collateral interest in the equity of PBS and substantially all of PBS’ assets unless Cracker Barrel would repay or unconditionally guarantee PBS indebtedness. In keeping with its strategy to concentrate its resources on its core business during the pandemic and in light of the substantial uncertainties surrounding the Punch Bowl Social business coming out of the pandemic, Cracker Barrel underscored that it has decided not to invest further resources to prevent the foreclosure or otherwise provide additional capital to PBS Holdco.

In a July 23, 2019 press release announcing entry into a strategic relationship with Cracker Barrel Old Country Store, Cracker Barrel and Bunch Bowl Social said Cracker Barrel would take a non-controlling position in the concept, explaining, "Under the terms of the agreement, Cracker Barrel will invest up to approximately $140 million to acquire its initial non-controlling stake and to provide growth capital for future development, although a portion of this amount is anticipated to be offset by third-party financing…The agreement includes provisions for the Company to potentially acquire a controlling or full ownership position in Punch Bowl Social in the future."

The Galligan Declaration further stated, "As recently as the week of December 8, 2020, the Company was operating just three venues at limited capacity. Unfortunately, because of restrictions limiting the number of patrons at each venue, as well as the public’s uneasiness of going out to eat or drink in public during a pandemic, each of those venues was losing money on a daily basis."

On or about December 10, 2020, PBS Lender, LLC (“Prepetition Lender”), an affiliate of the proposed postpetion lender, PBS DIP Lender, LLC (the “DIP Lender”) entered into a note and a loan and security agreement (collectively, the “December 10 Loan Agreement”) with PBS Inc., Brandco and each of the PBS Subsidiaries, by and through which Prepetition Lender loaned $261,500.00 to PBS Inc., Brandco, and each of the PBS Subsidiaries for the purposes of paying retainers fees, and expenses of restructuring counsel and a financial advisor; and for working capital and general corporate purposes, including the payment of rent and other lease expenses, to the extent reasonably necessary to preserve or enhance the value the Company’s assets….

The Debtors have at least one other creditor who may assert a construction lien for work done at one of the venues. The Debtors also owe approximately $465,000 of federal withholding taxes, but those are not due until December 31, 2021 and December 31, 2022, because the Debtors elected defer payment as allowed under the CARES Act. Also, the Debtors are responsible for certain sales taxes, for the three venues that were operating immediately prior to the Petition Date, but those are not due until January 19, 2021. Because there is no immediate need for payment of those obligations, the Debtors are not seeking authority to pay those taxes on the first day of these Chapter 11 Cases, but will likely seek authority to pay the sales taxes at the second day hearing.

In addition to secured obligations and priority taxes, the Debtors currently have unsecured debt that they estimate to total between $18,000,000 and $23,000,000, including more than $10,000,000 owed by Brandco to Chase Bank, N.A., owed in connection with the Paycheck Protection Program (PPP). Some portion of the amount owed to Chase Bank may be eligible for loan forgiveness as such amounts were used by the Debtors for eligible payroll costs and payments for certain eligible business expenses. The Debtors also owe more than $2,900,000 to landlords for rent, including common area maintenance charges, plus as much as $6,800,000 of rent due by non-debtor Operating Companies for which Brandco is liable. Brandco is also responsible for payment of obligations to certain suppliers and other trade vendors that the Debtors estimate to be approximately $3,500,000. The Debtors also estimate that they have obligations to their employees for wages and benefits and related costs in an aggregate amount of less than $500,000 that they are seeking to pay on an interim and final basis.

According to the Debtors: "Punch Bowl Social is the first experiential food and beverage brand to bring a made-from-scratch menu and craft beverages together with social gaming in one design-forward environment. Punch Bowl Social was named as one of Fast Company's 2019 Top 50  Most Innovative Companies in the World, a Nation's Restaurant News Hot Concept  in 2018, among more than a dozen other national and regional awards. Punch Bowl Social serves weekend brunch, lunch, dinner and late-night snacks alongside a variety of creative punches, local microbrews and craft non-alcoholic beverages." 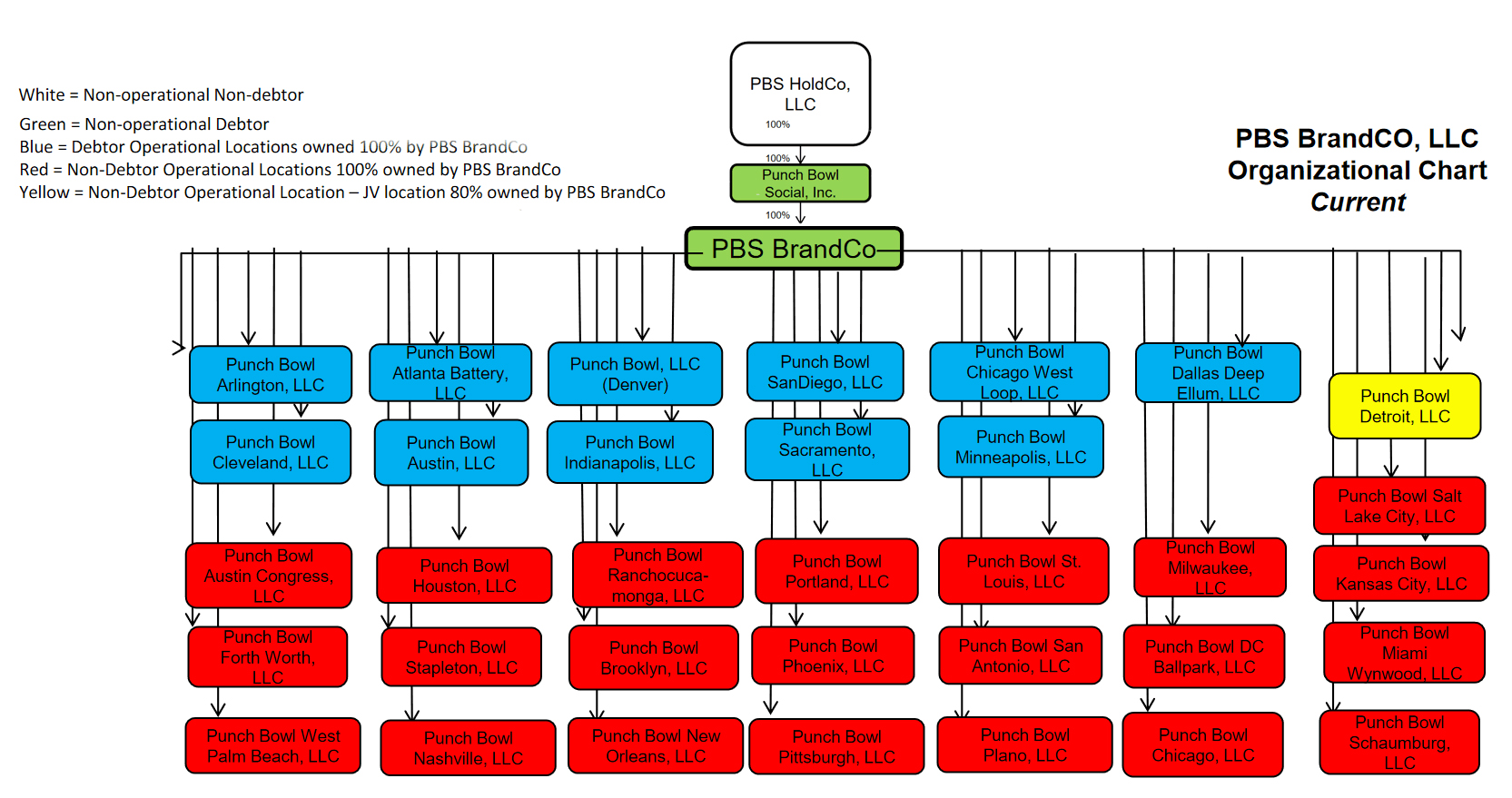