September 28, 2022 – Judge Mary Walrath said she would approve the Debtors' access to a re-worked debtor-in-possession facility on an interim basis, but joined the Office of the U.S. Trustee at Wednesday's first-day hearing in raising concerns over the $150.0mn roll-up portion of the $200.0mn credit agreement.

Under the revised proposal, which was still being negotiated and drafted while the hearing progressed, the Debtors will have interim access to $25.0mn of the $50.0mn new money portion of the DIP facility and $75.0mn of the roll-up. Instead of seeking access to the entire $150.0mn roll-up under the interim order, which was originally proposed by the Debtors' motion [Docket No. 14], the remaining $75.0mn will now be placed in escrow.

Debtors' counsel Garrett Fail told the Court at Wednesday's hearing: “The roll-up of the second $75.0mn will occur only if and when the court approves the second-round of funding” and that cash is needed by the Debtors.

Fail also said adjustments will be made to applicability of interest under the revised credit agreement, with the SOFR rate applying only on amounts available under the interim order and on all new-money draws, and an unused line fee will be applied to the $25.0mn of new money approved for access under the interim order of SOFR plus 2.0%, payable in cash.

Following an objection from Linda Casey on behalf of the U.S. Trustee that the $75.0mn roll-up, and in turn, the total roll-up amount was too high, Judge Walrath said she would allow the roll-up on an interim basis, adding that it’s reasonable for the DIP lenders to be seeking additional protection when being asked to make payments to subordinate parties from the DIP funds. However, Walrath did express concerns about the 3:1 new money to roll-up ratio that would apply under the interim order (Casey pointed out that it would have been 6:1 if the full $150.0mn would have been approved on an interim basis.

Walrath said she believes the $25.0mn of interim new-money financing was supposed to go toward the kinds of expenses the Debtors plan to use the roll-up to fund. Debtors' counsel, stressing the urgent need for financing, argued that more than just the new money would be necessary to cover continue payroll and other expenses.

“To get us past today, I will approve it [the $75.0mn interim roll-up], but I am very skeptical of approving any further roll-up," Walrath said, adding that the parties will need to negotiate further before final approval will be granted.

Scott Greenberg, counsel for the ad hoc first-lien lenders and proposed DIP lender, acknowledged that his clients were "not super happy" about committing to provide funding without a restructuring support agreement being put in place that outlines their recovery under an eventual Chapter 11 Plan, but conceded that the Debtors' cases will very much depend on how contract renegotiations play out. As a result, Greenberg said post-effective date liquidity and the chances of the Debtors' ability to continue as a going concern can't be determined until the success of contract renegotiations is better known.

“We all know what the alternative option looks like, and it’s not pretty," Greenberg said. "This DIP from our perspective is particularly risky.” However, he added that the DIP facility is "appropriately priced for the risk.”

On September 27, 2022, the Debtors requested Court authority to access up to $200 million in debtor-in-possession financing to be provided by certain of the Debtors’ prepetition secured lenders [Docket No. 14]. The DIP financing consists of (i) a new money term loan facility in an aggregate amount not to exceed $50.0 million (the “New Money Facility”), with $25.0mn available on an interim basis, and (ii) a term loan facility in an aggregate principal amount not to exceed $150.0 million (the “Roll-Up Facility"). The initial, to-be-revised DIP credit agreement is attached to the motion at Exhibit B.

The motion [Docket No. 14] states, “As of the Petition Date, the Debtors have approximately $6 million in cash on hand and require immediate access to the DIP Financing and authority to use Cash Collateral to ensure that they have sufficient liquidity to operate their business while in bankruptcy. To finance these chapter 11 cases, the DIP Lenders have committed to provide the Debtors with the $50 million New Money Facility.

John Singh, a partner in the Restructuring and Special Situations Group at investment banker PJT Partners LP noted in a declaration in support of the DIP Financing motion [Docket No. 15], "The DIP Facility also contemplates a roll-up (effective upon entry of the Interim Order) of up to $150 million of obligations outstanding under the First Lien Credit Agreement held by DIP Lenders and a proposed tag right (effective upon entry of the Final Order), whereby each DIP Lender can elect to convert its DIP loans to equity if a third party invests in the Debtors through equity or equity–linked securities on economically-similar terms."

On September 26, 2022, Phoenix Services Topco, LLC and eight affiliated debtors (together, "Phoenix Services," or the “Debtors”) filed for Chapter 11 protection with the U.S. Bankruptcy Court in the District of Delaware, lead case No. 22-10906 (Judge TBA). At filing, the Debtors, "a premier provider of outsourced slag handling, metal reclamation, and other complementary services to leading steel mill customers around the world," noted estimated assets between $500.0mn and $1.0bn; and estimated liabilities between $500.0mn and $1.0bn ($587.0mn of funded debt).

In December 2017, the Debtors were acquired by Apollo Natural Resources Partners II, L.P. (“ANRP II”), a fund managed by affiliates of Apollo Global Management, LLC (NYSE: APO, and together with its consolidated subsidiaries, “Apollo”), from existing shareholders, including then majority shareholder Olympus Partners. Terms of the transaction were not disclosed.

Initial Budget [Filed at Docket No. 39] 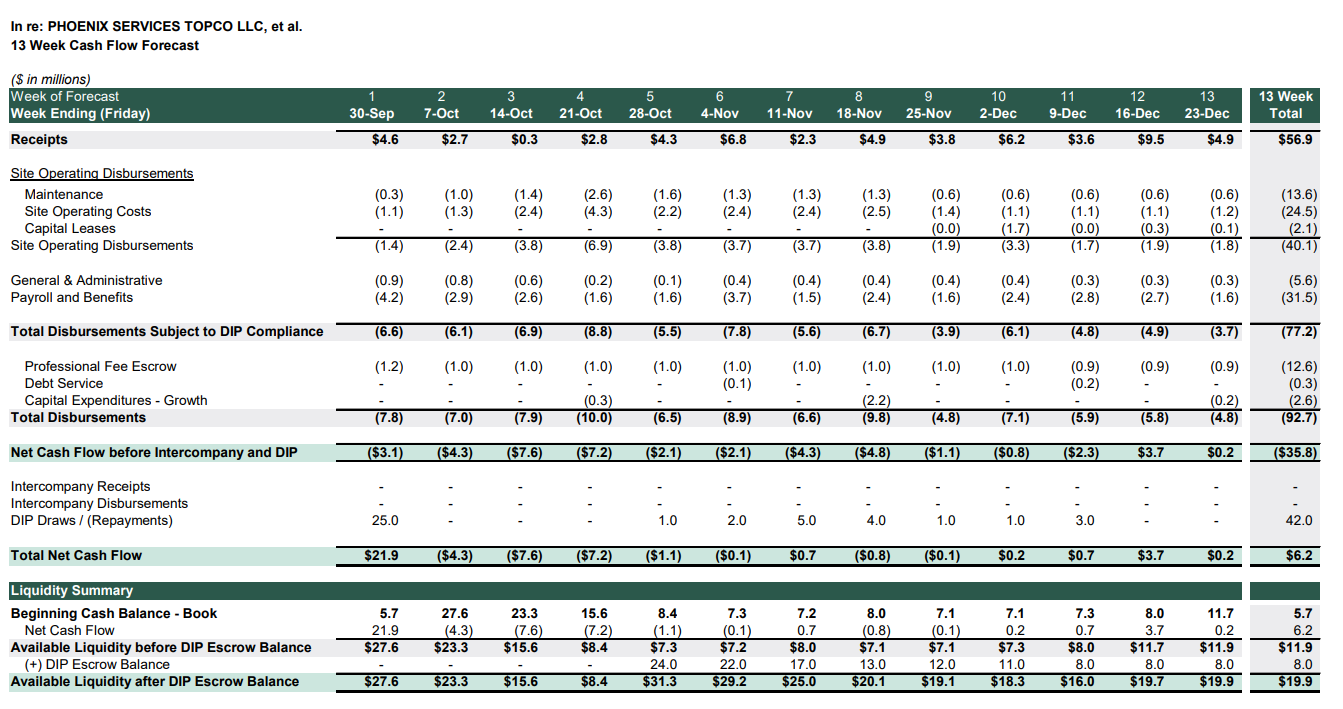 According to the Debtors: "Phoenix Services provides responsive world-class service to steel producers around the globe. Core services include slag handling utilizing slag pot carriers or the traditional slag pit digging with front-end loaders; the recovery and sizing of scrap metal to its customer’s specification; and processing slag for use by its steel mill customer or marketing processed slag material for aggregate use.

Founded in 2006, Phoenix Services was started by two industry titans dedicated to improving customer satisfaction by finding a better way.  Through careful investment in state of the art equipment, rapid innovation in metal recovery and operational processes, combined with a commitment to maintaining the highest quality, safety and productivity, Phoenix Services has risen to become the global leader in steel mill services.  Our continuing promise to never settle for the status quo drives our culture and permeates through every facility, team and individual who proudly represents the Phoenix name."

The Richard Declaration adds: "The Company provides mission-critical services to leading, global steelproducing companies. With approximately 2600 non-unionized and unionized employees, the Company is the second largest service provider to steel mills domestically and the third largest globally, based on market position. As set forth in more detail below, the Company provides a variety of services based on each customer’s unique needs across 39 customer sites. This suite of customer services primarily includes the removal, handling, and processing of molten slag at customer sites, as well as the preparation and transportation of metal scraps, raw materials, and finished products. Notably, the Debtors own and operate substantial fixed and movable machinery and equipment at each of their locations. Further, the Debtors own and operate steel mill servicing operations through non-debtor subsidiaries in Europe, South America, and Africa."

On Apollo role, the Debtors add: "With equity capital committed by certain funds managed by affiliates of Apollo Global Management, one of the world’s largest private equity firms, Phoenix Services LLC has the ability to implement sustainable solutions and maximize efficiency to leading steel mill customers around the world."