On April 7, 2020, Quorum Health Corporation and over 100 affiliated Debtors (NYSE: QHC, “Quorum Health” or the “Debtors”) filed for Chapter 11 protection with the U.S. Bankruptcy Court in the District of Delaware, lead case number 20-10766. At filling, the Debtors, an operator of general acute care hospitals and outpatient services in the United States, noted more than 100,000 creditors estimated assets of $373.1mn; and estimated liabilities of $1.262bn.

In a press release heralding the confirmation of their prepackaged Plan, the Debtors stated: "The decision paves the way for the Company to complete its financial reorganization and successfully emerge from Chapter 11. The Company expects the Court to enter the final order soon and expects to emerge from bankruptcy in early July.

Upon emergence, Quorum Health will reduce its debt by approximately $500 million."

Marty Smith, the Debtors' executive vice president and chief operating officer, added: "We are grateful for the confidence of our financial stakeholders and partners, as well as our dedicated employees and physicians, and look forward to building on the significant progress we have made in strengthening our operations in recent years.”

There has been one persistent objector throughout the Debtors' Chapter 11 process, equity holder Mudrick Capital Management, L.P. (“Mudrick”) which had (i) argued that the Debtors' Plan was not proposed in good faith and "wipes out existing equity interests while the Debtors have a total enterprise value that puts equity holders firmly ‘in the money'," and (ii) offered up a competing Plan. Mudrick specifically targeted the Debtors' valuation efforts arguing that “Debtors and Noteholders [are seeking] to rush to confirmation using a temporary pandemic-related earnings trough to drive an opportunistic false valuation.” See more on the Mudrick objection below; also note that the valuation analysis is found at Exhibit E to the Disclosure Statement.

The Debtors' push-back, with which Judge Karen B. Owens seems to have agreed, was that long before COVID-19 (and the date at which Mudrick purchased its equity) the Debtors and their advisors had recognized the "reality that there was no value for existing equity holders under any possible scenario" and that "[a]s a result of the absolute priority rule, equity holders of a hopelessly insolvent debtor will receive no distribution…which means that Mudrick is not entitled to any distribution in these Chapter 11 Cases."

As set forth in the Plan and the RSA, the Restructuring Transactions provide, among other things, that:

Restructuring Support Agreement (filed as part of an 8-K here)

The following is a summary of classes, claims, voting rights, and expected recoveries showing changes (defined terms are as defined in the Plan and/or Disclosure Statement):

On May 7, 2020, the Debtors’ claims agent notified the Court of the Plan voting results [Docket No. 294], which were as follows:

The Debtors' Disclosure Statement provides an overview of the events leading to the Chapter 11 filings which focuses on (i) heightened challenges faced by rural hospitals largely dependent on uninsured and under-insured patients and the Medicare and Medicaid programs that fill the resulting insurance gap as exacerbated by (ii) the Debtors over-levered capital structure: "Rural hospitals are limited in the number of patients they can expect to treat in a particular year, given the number of possible patients that live in a particular service area. The patients that are treated by rural hospitals often have no commercial insurance or are underinsured and use emergency room services in lieu of primary care providers. The Debtors provide care to treat these patients, but often receive no reimbursement for those services.

While these challenges do not by themselves necessarily prevent a rural healthcare company from operating profitably, when coupled with the Company’s capital structure and over-levered balance sheet, they have limited profitability and prevented growth. Continuing to operate in rural and mid-sized areas with the Debtors’ current capital structure would ultimately impair the Debtors’ ability to meet important working capital and operational needs, maintain ordinary-course business relationships, pursue strategic opportunities, recruit medical professionals, and otherwise reinvest in their operations and facilities. Following emergence from chapter 11 with a less leveraged capital structure, the Debtors anticipate that they will be able to operate profitably.

[As previously reported] April 29, 2020 – Mudrick Capital Management, L.P. (“Mudrick”), the beneficial owner of approximately 15% of the Debtors' equity, objected to the Debtors' prepackaged Plan and Disclosure Statement, arguing that the solvent Debtors are using an "indefensibly low total enterprise valuation," contrived to serve the interests of noteholders, and in doing do violating the absolute priority rule (twice) [Docket No. 205]. Not only were the Debtors solvent and the valuation suspect at filing, Mudrick argues, but the Debtors are more solvent and the valuation more suspect, today; potential sources of COVID-19 funding ($30.0mn already received by the Debtors and several times that likely to be received) completely changing the Debtors' circumstances and rendering the Plan as filed "stale."

The objection states, “The Debtors are solvent. They were solvent when they filed bankruptcy and they are much more solvent today. Rather than recognize this solvency and provide for a meaningful equity recovery, the Plan wipes out the equity holders and transfers the equity value – hundreds of millions of dollars – to the Noteholders. The Debtors attempt to accomplish this illegal diversion – a clear violation of the absolute priority rule – through an indefensibly low total enterprise valuation, negotiated with the very Noteholders taking 100% of the New Common Stock, 100% of the right to buy new equity, 100% of the 7.5% premium on such right, and 100% of the QHC Litigation Trust Interests. Remarkably, both in the Plan valuation and the liquidation analyses, the Debtors completely (and inexplicably) ignore the value of the QHC Litigation Trust Interests as well as the right to buy new equity and the premium on such right. It is quite clear that under the Plan the Noteholders are receiving more than payment in full while the equity holders are recovering zero – an amount substantially less than the value of their interests. These two stark violations of absolute priority in a cramdown plan require denial of confirmation.

The Debtors filed the Plan on April 8, 2020, as required by the Restructuring Support Agreement (‘RSA’), signed two days before. Even though Mudrick contends that the Debtors were solvent at that time, much has changed in the three weeks since then. Federal governmental action in just the last week has markedly and materially increased the Debtors’ value. The Debtors’ flawed valuation propping up the Plan is now factually and legally stale. The CARES Act Provider Relief Fund, increased by $75 billion last week in the Health Care Enhancement Act passed by Congress, now provides $175 billion in grants, not loans, for hospitals and other providers, including the Debtors. Prior to last week’s increase, HHS had already disbursed $30 billion on the basis of providers’ 2019 Medicare fee-for-service revenue. Of this, HHS granted the Debtors $19.2 million in cash, or 0.06% of the initial $30 billion distribution – a material cash asset that is not accounted for in the Debtors’ valuation.

While the exact distribution methodology for the remaining $145 billion of grants is not yet fully known, conservatively assuming the Debtors receive the same 0.06% distribution of this forthcoming $145 billion, the Debtor will receive an additional $112 million. Critically to the benefit of the Debtors, on April 22, 2020, HHS announced that $10 billion of the remaining $145 billion would be allocated to rural hospitals. Mudrick estimates that the Debtors stand to garner at least an additional $127 million to $146 million in grant money just from these earmarked funds – with significant additional funds forthcoming from the remaining $135 billion still to be granted. All in, depending on the Debtors’ requests and the final grant amounts, the Debtors may receive hundreds of millions of dollars that they had no expectation of getting when they negotiated the RSA and filed the Plan. Although the Debtors were unaware of the full amount of the cash infusion coming their way, to date, none of that value is in the Debtors’ valuation, none goes to equity, none of the underlying facts have been disclosed, and the Debtors have yet to exercise their much-touted ‘fiduciary out’ from the RSA to rebalance the Plan in recognition of the undeniable equity value. It is plain that the Debtors should terminate the RSA and withdraw the Plan. Mudrick has written to the Debtors’ Board and implored that it does so. Hopefully, QHC’s Board will exercise its fiduciary duties properly and the Court will not need to address these Preliminary Objections. However, if the Court does have to address confirmation, in addition to the fatal absolute priority flaws, the Court must deny confirmation for the independent reason that the Plan contains an impermissible ‘opt-out plus’ mechanism. The Debtors seek to force shareholders – who are receiving nothing under the Plan, are deemed to reject it, and barely received notice (without the Disclosure Statement) – to file a Plan objection if they wish not to be bound by third-party releases. This Court has recently denied confirmation of a plan that contained a much less offensive requirement of completing an opt-out form, holding that it cannot be a substitute for actual consent to be bound by third-party releases. Here it is worse; the Plan is the antithesis of due process.”

The Debtors filed Plan supplements at Docket Nos. 202, 471 and 483 which attached the following documents (location of latest version noted):

According to the Debtors: "Quorum Health Corporation is an operator of general acute care hospitals and outpatient services in the United States. Through its subsidiaries, the Company owns, leases or operates a diversified portfolio of 23 affiliated hospitals in rural and mid-sized markets located across 13 states with an aggregate of 1,950 licensed beds. The Company also operates Quorum Health Resources, LLC, a leading hospital management advisory and consulting services business. 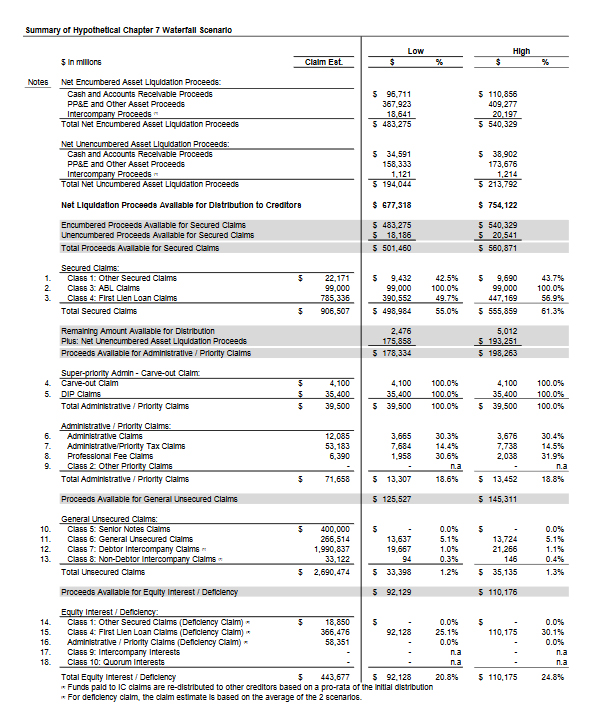