The Plan confirmation hearing, previously scheduled for July 9th, has been brought forward to June 25th which deals a blow to the Debtors' going concern sales hopes. The Court had shown a willingness (in a bench ruling) to extend the Plan confirmation timetable to dovetail with what appeared to be an energized going concern sales process, but once again DIP lender BNP Paribas has used its whip hand to push the Debtors closer to liquidation. Citing increased costs (a total of $4.0mn, including a $2.2mn receivable from the USPS), BNP Paribas has said that funding the the extra two weeks would render the Plan unconfirmable and breach the existing DIP facility [Docket No. 297].

In a response to that motion, the Debtors' Committee of Unsecured Creditors (the "Committee") [Docket No. 307] shot back: "The Debtors are making significant progress with their going concern sale efforts and conditional approval of the PSP grant under the CARES Act. Despite these developments, the DIP Lenders continue to press on with their liquidation Plan notwithstanding the Court’s ruling extending the confirmation hearing milestone to accommodate the ongoing process. While the bid deadline has been extended by a week to June 24, the DIP Lenders continue to insist that plan confirmation occur the very next day. This unnecessarily shortened timeline not only undermines the logistics of the sale process, but more importantly, allows the DIP Lenders to unilaterally stop the Debtors’ sale efforts, even if qualified bidders have emerged by June 24."

In an interesting turn of events, the Debtors are a step closer to CARES Act funding and a possible escape from the currently anticipated liquidation of their assets, albeit now with a shortened timetable. The revised Disclosure Statement now notes: "On May 14, 2020, the United States Department of Treasury informed the Debtors that it was prepared to move forward with their Payroll Support Program applications, subject to certain requirements, including that the funds from the PSP grants be used exclusively for the payment of wages, salaries, and benefits to employees, and that the Debtors maintain the level of scheduled air transportation service served by the Debtors before March 1, 2020. The Debtors are also required to provide a plan of reorganization that would demonstrates the Debtors’ ability to satisfy the requirements under the PSP agreement."

It is still the Debtors' hope that CARES Act funding will attract a potential buyer and that they will be able to present an acceptable sales-based transaction to their debtor-in-possession ("DIP") lenders who have otherwise driven a Plan premised on the accelerated liquidation of the Debtors' assets. The Disclosure Statement which continues to go through all the required motions as to a liquidation path, also notes: "The Plan also provides that the Debtors may seek approval of an Asset Sale at Confirmation in the event that the Debtors conclude that an Asset Sale at Confirmation will yield a higher or better return to the Estates than a sale by the Liquidation Trust; provided that no Asset Sale shall be considered at the Confirmation Hearing or at Confirmation absent the consent of the DIP Lenders."

The Debtors also filed a liquidation analysis (see below) which unsubtly reminds DIP lenders BNP Paribas that they do not emerge from a liquidation plan in one piece, anticipating a 37-61% recovery for BNP Paribas and also establishing a price to beat for any potential going concern purchaser.

The following is a summary of classes, claims, voting rights and expected recoveries with (defined terms are as defined in the Plan and/or Disclosure Statement):

Liquidation Analysis (see Exhibit B of the Revised Disclosure Statement [Docket No. 256] for notes)

As set forth in the current Liquidation Analysis: 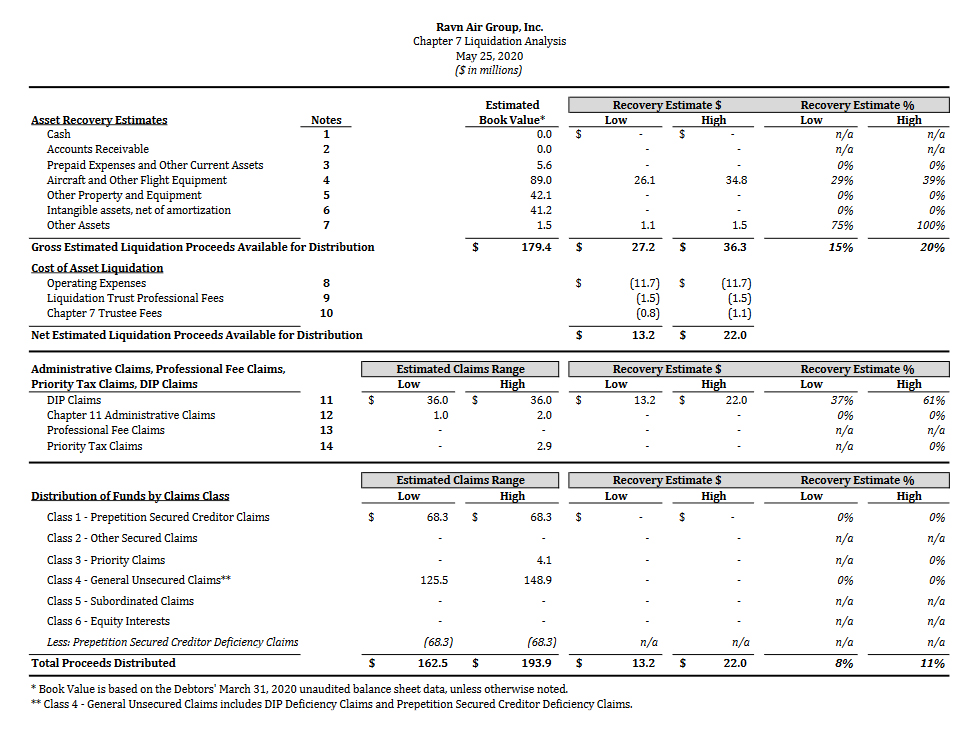