November 13, 2020 – The Debtors notified the Court that their Third Amended Chapter 11 Plan of Reorganization had become effective as of November 12, 2020 [Docket No.210]. The Court had previously confirmed the Debtors’ Plan on October 21, 2020 [Docket No. 194]. It appears that the surviving part of the Debtors' business, Remora Operating, LLC, the new equity of which will be held by the Debtors' prepetition first lien lenders, has been renamed "Riverbank Operating."

On August 12, 2020, privately-held Remora Petroleum, L.P. and four affiliated Debtors (“Remora” or the “Debtors”) filed for Chapter 11 protection with the U.S. Bankruptcy Court in the Southern District of Texas, lead case number 20-34037 (Judge Jones). At filing, the Debtors, Texas-based owners of operated and non-operated working interests across the Anadarko, Gulf Coast, Permian, D-J and Los Angeles Basins, noted estimated assets between $10.0mn and $50.0mn; and estimated liabilities between $50.0mn and $100.0mn.

The deadline for filing Administrative Expense Claims and Contract Rejection Claims is set no later than thirty (30) days after the Effective Date, i.e., by December 14, 2020.

The Debtors' memorandum of law in support of Plan confirmation sums up: "Less than two and a half months after commencing these chapter 11 cases (the ‘Chapter 11 Cases’), the Debtors seek confirmation of a plan of reorganization that would, among other things, provide (i) $600,000 for payment to the Second Lien Lenders in full satisfaction of their claims; (ii) $100,000 for payment of unsecured creditors pro rata in full satisfaction of their claims; (iii) transfer all assets of the Debtors to Remora Operating, LLC (‘Remora Operating’) and assignment of the equity interests in Remora Operating to the First Lien Lenders or their designee in satisfaction of amounts owed under the Prepetition First Lien Credit Agreement (as defined below) and the DIP Claim; and (iv) waiver of the any deficiency claim owed to the First Lien Lenders. Further, the Debtors other than Remora Operating will wind down their operations post confirmation. The transactions enumerated above will allow the Debtors to emerge from these Chapter 11 Cases as a reorganized entity better positioned to withstand the commodity price volatility of the oil and gas industry."

The Disclosure Statement [Docket No. 132] provides: “The Debtors are commencing this Solicitation after extensive discussions over the past several months with certain of their key creditor constituencies, including the holders of the Debtors’ first lien indebtedness. The Plan is the result of these extensive good faith discussions and encompasses a comprehensive restructuring of the Debtors’ existing debt obligations in these Chapter 11 Cases (the ‘Restructuring’).

The Restructuring proposed by the Debtors will provide substantial benefits to the Debtors and their stakeholders, including, without limitation, the following:

The following is a summary of classes, claims, voting rights and expected recoveries (defined terms are as defined in the Plan and/or Disclosure Statement; see also the Liquidation Analysis below)

On October 20, 2020, the Debtors' claims agent notified the Court of the Plan voting results [Docket No. 185], which were as follows:

The Disclosure Statement provides: "Beginning in November 2014, commodity prices, particularly for crude oil, began to decline sharply and continued to decline into 2016. Although commodity prices partially recovered in late 2016 and continued to slowly recover in 2017, commodity prices have not fully recovered from their previous highs and remain volatile. These issues were exacerbated in March and April 2020 by the sharp decline in commodity prices caused by (i) a demand shock as a result of ongoing efforts to contain the outbreak and spread of the COVID-19 virus; and (ii) a dispute between Russia and the Organization of the Petroleum Exporting Countries, led by Saudi Arabia, regarding reductions to crude oil productions levels.

The sustained decline and depressed commodity prices made it difficult for the Debtors to access additional liquidity to continue its growth strategy and maintain operations. Resulting from this prolonged decline in commodity prices, the Debtors were unable to comply with certain financial covenants in the First Lien Loan Agreement and Second Lien Loan Agreement for the fiscal quarters ending June 30, 2019 and September 30, 2019. Additionally, on December 12, 2019, the First Lien Agent informed Remora of the existence of a Borrowing Base Deficiency (as defined in the First Lien Loan Agreement) in the amount $3.25 million (the ‘Fall 2019 Borrowing Base Deficiency’).

The following documents were attached to the Disclosure Statement [Docket No. 132]

On October 9, 2020, the Debtors filed an Initial Plan Supplement to their Chapter 11 Plan of Reorganization [Docket No. 169] were as follows:

On October 16, 2020, the Debtors filed a Plan Supplement to their Chapter 11 Plan of Reorganization [Docket No.181] and attached: 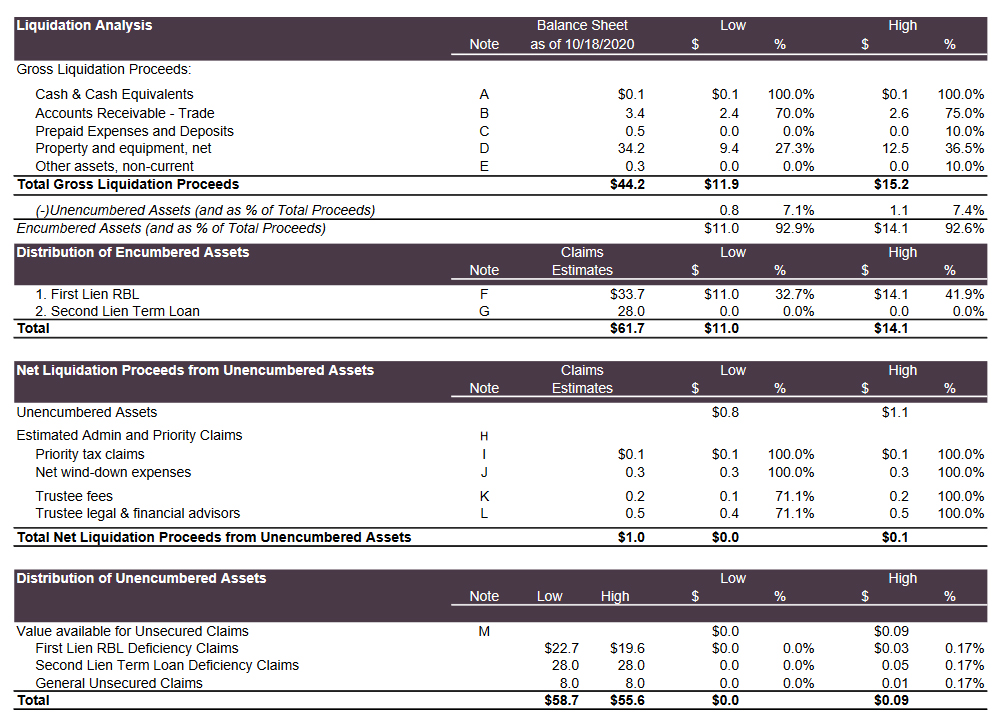 According to the Debtors: "Remora Petroleum is a private oil and gas company focused on the acquisition and development of mature, long-lived producing properties. The Company owns operated and non-operated working interests across the Anadarko, Gulf Coast, Permian, D-J and Los Angeles Basins."

As of the Petition date, the Debtors held non-operated working interests in (i) 298 wells in the Anadarko Basin centered in West Oklahoma and the Texas Panhandle; (ii) 56 wells in the Gulf Coast Basin of South and East Texas, Louisiana, and Alabama; (iii) 5 wells in the Denver-Julesburg Basin of Eastern Colorado and Southeastern Wyoming; (iv) 852 wells in the Arkoma Basin of Southeastern Oklahoma and Arkansas; (v) 1 well in the Delaware Basin of West Texas and Southern New Mexico; and (vi) 96 wells in the Texas-Louisiana Salt Basin. From their non-operated assets, for the three months ended June 30, 2020, the Debtors produced approximately 3,001 barrels of oil equivalent per day (net), made up of 7% oil, 13% NGLs and 80% natural gas. This production accounted for approximately $850,000 in monthly revenue over the same period of time.