March 25, 2022 – The U.S. Trustee assigned to the Debtors' cases has objected to the Debtors’ proposed debtor-in-possession ("DIP") financing [Docket No. 152] arguing that it would grant "a superpriority claim of pre-petition debt over post-petition debt, including certain unmortgaged Mississippi real estate and chapter 5 avoidance actions," with the promotion of that pre-petition debt to DIP status particularly inappropriate given that the Plan is a "pre-negotiated Plan by which general unsecured creditors are deemed to reject the plan because they have no anticipated recovery."

How can it be fair, the U.S Trustee wonders, to hand potentially valuable estate assets (the unencumbered Mississippi land and causes of action) to the very prepetition lenders who may be targets of those "colorable causes of action" AND release those lenders from potential liability in respect of a Plan that denies the rightful beneficiaries of that value (general unsecured creditors) any right to participate in the Plan at all?

Interestingly, although the U.S. Trustee notes that the ratio of roll-up to new money is 2:1 and that $10.0mn of the roll-up ocurred with the interim DIP order, neither of those provisions (often objected to as overly generous and given too early in the Chapter 11 process) draw a specific objection.

The $51.0mn of proposed DIP financing, being provided by Goldman Sachs Bank USA (the “DIP Lender,” and also the agent in respect of the Debtors’ @$100.0mn of prepetition Term Loans) is comprised of (i) $17.0mn of new money term loans ($5.0mn available with the interim DIP order issued on March 11th) and (ii) a $34.0mn roll-up of prepetition Term Loans ($10.0mn with the interim order).

At filing, the Debtors stated that “the tumultuous drop in commodity prices beginning in January 2020 stunted the Company’s ability to grow production and…[c]ommodity prices remained depressed on account of, among other things, the impact and uncertainties related to the novel coronavirus ('COVID-19'). The lack of liquidity during this period was a significant opportunity cost for the Company: Without sufficient liquidity to further develop its Northern Assets, the Company was unable to utilize the maturing midstream agreements and satisfy the volume requirements under the MVC….This series of events turned the midstream contracts on their heads. Although they may have been valuable to the Company if the Company had been able to pursue its planned Northern Asset capital expenditures and realize significant production increases, the midstream contracts became significant liabilities once the depressed commodity prices and impacts of COVID-19 derailed its growth strategy.

The U.S. Trustee’s objection states: “The Debtors seek entry of a final order providing both for 1) the use of cash collateral that is subject to liens held by Goldman Sachs and 2) approval of a $51 million Final Roll-Up DIP consisting of $17 million in new money and a roll up of $34 million in pre-petition debt. The United States Trustee objects for the following reasons:

….The Final Roll-Up DIP would automatically repay portions of the Secured Lenders’ prepetition debt, converting that into a post-petition claim with superpriority administrative expense status, secured with estate assets, including unencumbered real estate and avoidance actions.

The Final Roll-Up DIP inappropriately improves the position of Goldman and Shell by granting a superpriority claim of pre-petition debt over post-petition debt, including certain unmortgaged Mississippi real estate and chapter 5 avoidance actions. The Motion is silent as to how the $34 million roll-up of pre-petition debt benefits the estate. The Motion is also silent as to the potential value of the Debtors’ unencumbered Mississippi assets [ie: The "Pickens Field" which includes over 1,500 acres in central Mississippi which appear suited for developing sites for “carbon capture, utilization and storage”] or chapter 5 avoidance actions. Given that the case is proceeding as a pre-negotiated plan without the vote of general unsecured creditors, the Debtors and DIP Lenders should be required to produce evidence as to what value is provided to the estate by the Final Roll-Up DIP and why general unsecured creditors should be deprived of a recovery from potentially valuable causes of action.”

The objection continues, “The United States Trustee objects to any provisions providing the DIP Lenders liens against the proceeds of chapter 5 causes of action. These avoidance actions are a source of recovery for general unsecured creditors in chapter 11 cases. Here, Debtors are proceeding under a pre-negotiated Plan by which general unsecured creditors are deemed to reject the plan because they have no anticipated recovery. And as discussed supra, the Debtors have not presented any evidence as to the value of these causes of action and therefore the recoveries.

Chapter 5 causes of action, by their nature, are created in the Bankruptcy Code for the benefit of unsecured creditors. The distinction of a lien in the chapter 5 cause of action and a lien in the recovery is immaterial. A lien in the recovery disincentives pursuit of litigation since those who pursue it do not receive the recovery. And lenders are often the targets of avoidance litigation. Shortening the investigatory period from the two-year statutory limitations in § 108 to the deadlines set forth in the Challenge Period affords enough benefit to the Secured Lenders.

The facts of this case highlight the need to maintain the causes of action and recovery for the benefit of creditors because the Debtors suspect actions exist. The Debtors appointed William Transier as an independent director to investigate certain ‘colorable causes of action held by the [Debtors]…including those that are proposed to be released under the Plan against the Released Parties.’ The Debtors even authorized Mr. Transier to retain his own independent counsel to conduct these investigations.

According to the Debtors: “Rockall Energy is a privately held US focused company, focused on development of a profitable carbon storage business through the utilization of existing oil and gas assets to incubate the portfolio.

Our corporate office is located in Dallas, TX, however, we have field offices and production in Mississippi, Louisiana and North Dakota.” 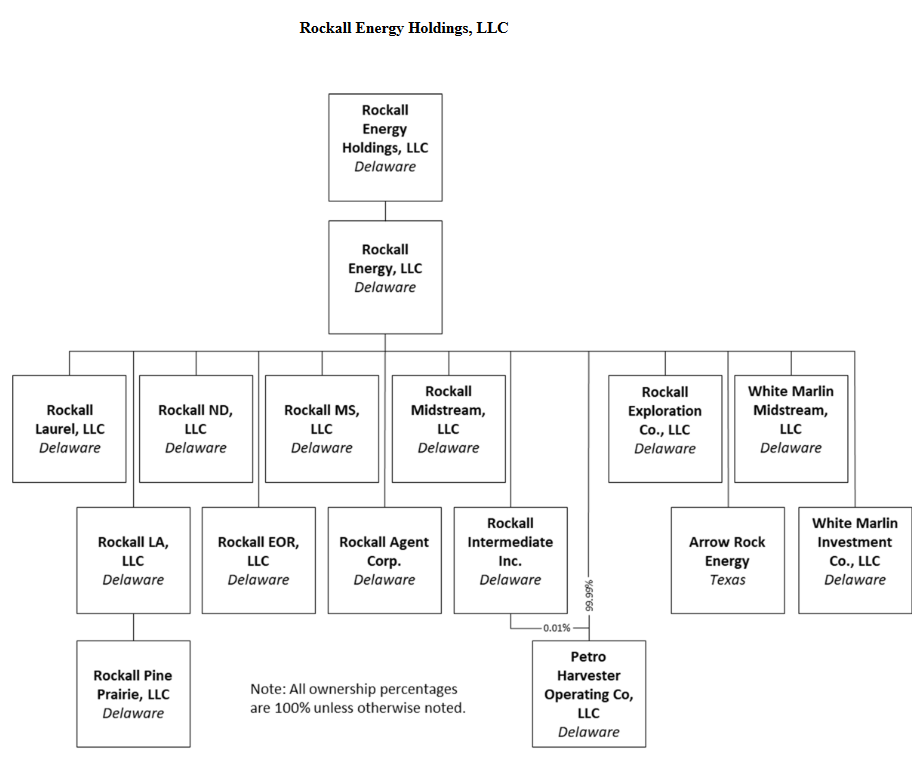