December 18, 2020 – The Debtors filed their First Amended Plan and Disclosure Statement, including blacklines of each showing changes to the versions filed on November 6, 2020 [Docket No. 749]

On the same day, the Debtors further filed a revised proposed Disclosure Statement Order, which shows changes from the original proposed order made to address certain comments received [Docket No. 750].

The Amended Plan [Docket No. 749] further adds a “Statement from the Official Committee of Unsecured Creditors” that states, "The Creditors' Committee does not support the Plan and recommends that Class 4 creditors vote no." (See more on Committee statement below).

The Plan reflects the agreement reached with the Prepetition Secured Creditors to reorganize the Debtors as a going-concern business, back-stopped by a parallel sale process. The Debtors and the Prepetition Secured Creditors believe that the financial restructurings, the operational restructuring (through, among other things, focused lease rejections) and the other transactions reflected in the Plan will position the Reorganized Debtors well to succeed post emergence from bankruptcy. With a sustainable business plan and adequate operating liquidity, the Reorganized Debtors will be positioned to compete more effectively in the evolving restaurant industry."

In respect of the Committee's statement that it does not support confirmation of the Plan, the Amended Disclosure Statement provides, "Since the Creditors’ Committee’s formation, it has been engaged in diligence concerning the Debtors’ assets as well as discussions with the Prepetition Secured Creditors and the DIP Lenders and the Debtors on a global resolution that would provide for what the Creditors’ Committee believes would be fair and equitable treatment for all general unsecured creditors under either a sale of assets or any proposed reorganization of the Debtors pursuant to the Plan. To date, those discussions have not resulted in any agreement.

The Disclosure Statement [Docket No. 749] attached the following documents:

As of the Petition date, the Debtors had outstanding funded debt obligations in the aggregate principal amount of approximately $37.91 million, and related interest and accruals. Additionally, as of the Petition Date, the Debtors had an estimated $20.5mn of outstanding accounts payable, on an unsecured basis, to vendors, customers, service providers, and landlords. The Debtors’ pro forma exit capital structure will consist of (a) the Exit L/C Facility (equal to up to $10,000,000 or such lesser amount agreed by the Reorganized Debtors), (b) the Exit Term Loan (equal to the lesser of (i) $30,000,000 less 90% of the Net Sale Proceeds, if any, in excess of $2,500,000 (excluding any proceeds from the sale of RT Lodge) and (ii) 1.2 times the agreed Broker’s Opinion of Value of the Debtors’ real property) and (c) New Common Shares in RT Asset Company: 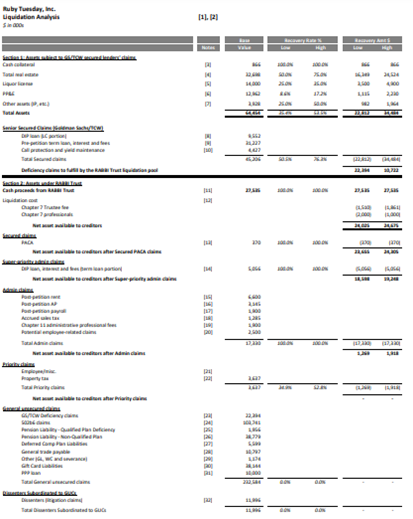 According to the Debtors: “Founded in 1972 in Knoxville, Tennessee, Ruby Tuesday, Inc., is dedicated to delighting guests with exceptional casual dining experiences that offer uncompromising quality paired with passionate service every time they visit. From signature handcrafted burgers to the farm-grown goodness of the Endless Garden Bar, Ruby Tuesday is proud of its long-standing history as an American classic and international favorite for nearly 50 years. The Company currently owns, operates and franchises casual dining restaurants in the United States, Guam, and five foreign countries under the Ruby Tuesday® brand.”