On October 7, 2020, privately-held RTI Holding Company, LLC and 50 affiliated Debtors (dba Ruby Tuesday; “RTI” or the “Debtors”) filed for Chapter 11 protection with the U.S. Bankruptcy Court in the District of Delaware, lead case number 20-12456. At filing, the Debtors, owners and franchisors of the Ruby Tuesday brand restaurants, noted estimated assets between $100.0mn and $500.0mn; and estimated liabilities between $100.0mn and $500.0mn. In a subsequently filed Schedule A/B, the lead Debtor noted Unknown of assets and $280,690,944.37 of liabilities [Docket No. 435].

In a press release announcing the emergence, the former Debtors stated: "The bankruptcy allowed Ruby Tuesday to shed liabilities, including leases from closed locations that were significantly impacted by COVID-19, and to strengthen its core business of 209 corporate-owned and operated locations. The successful emergence from Chapter 11 will allow Ruby Tuesday to reinforce the brand’s commitment to its existing guests, while continuing to develop virtual 'delivery-only' brands to capitalize on its core strengths and increased off-premise business as part of the company’s long-term growth plan."

Those 209 go-forward locations represent a dramatic downsizing over the last three years.  At the time of NRD Capital's acquisition of the Debtors in December 2017, the Debtors had 596 Ruby Tuesday restaurants (541 owned and 55 franchised); those number continued to fall prior to the Debtors' Chapter 11 filing, with reports suggesting that the Debtors had "quietly closed" 150 locations during 2020.

The Debtors' memorandum of law in support of Plan confirmation (the "Memorandum") [Docket No. 1109] provides the pre-confirmation hearing state-of-play including in respect of the Global Settlement: "The Debtors commenced their chapter 11 bankruptcy cases in the midst of a global pandemic that has resulted in tremendous loss of life and significant economic damage, including the evisceration of the restaurant industry. In an effort to restructure their business operations during this time of uncertainty, the Debtors and Prepetition Secured Creditors entered into a Restructuring Support Agreement ('RSA'), the terms of which were memorialized in the Plan. The Plan contemplated a dual path whereby the Debtors would either emerge from these chapter 11 proceedings under new ownership by the Prepetition Secured Creditors (the 'Restructuring’) or sell their assets as a going concern (the 'Sale'). No Topping Bids were received prior to the Bid Deadline established by the Bid Procedures Order, January 14, 2021 at 5:00 p.m. (Prevailing Eastern Time), and, therefore, the Debtors are proceeding with their Restructuring.

The Debtors, the Prepetition Agent, Prepetition Secured Creditors, the DIP Lenders, the Creditors’ Committee, and the Equity Parent have negotiated the terms of a Plan settlement term sheet (the 'Plan Settlement Term Sheet') that modifies the terms of the Debtors’ Restructuring for the benefit of general unsecured creditors. It memorializes a global settlement ('Global Settlement') among such parties. Under such Global Settlement, the Holders of Class 4 General Unsecured Claims shall receive their Pro Rata shares of (a) $5,000,000, consisting of (i) payment of $3,000,000 (consisting of an initial $2,000,000 payable within 60 days of the Effective Date, unless extended, plus a Deferred Cash Payment payable by March 31, 2022, unless extended, of $1,000,000, reduced by any Excess Cash Payments received) and (ii) a Note in the principal amount of $2,000,000, reduced by any Excess Cash Payments received; and (b) 33% of the proceeds from the Interchange Claim, which is a claim in a class action lawsuit captioned as In re Payment Card Interchange Fee and Merchant Discount Antitrust Litigation.

The Debtors and the Prepetition Secured Creditors believe that the financial restructuring, the operational restructuring (through, among other things, focused lease rejections) and the other transactions reflected in the Plan would position the Reorganized Debtors, Reorganized RTI and RT Lodge Company well to succeed post-emergence from bankruptcy. With a sustainable business plan and adequate operating liquidity, the Reorganized Debtors will be positioned to compete more effectively in the challenging casual dining industry.

Following extensive negotiations, the Debtors, Prepetition Secured Creditors, the Creditors’ Committee and NRD reached a settlement to provide for greater recoveries to Class 4, comprised of General Unsecured Claims.  Pursuant to the Plan, the operations of the Debtors will be bifurcated.  Specifically, all of RTI’s operating assets other than the RT Lodge (as such term is defined below) and interests in its subsidiaries (other than RTI) shall be transferred to RT Asset Company, which shall be owned after the Effective Date by Holders of Allowed Subclass 3B Claims, and, potentially, Allowed Subclass 3A Claims, subject to dilution.  Also, pursuant to ARTICLE III.C.3.c, the Debtors will transfer to each Holder of an Allowed Subclass 3A Claim its Pro Rata share of one hundred percent (100%) of the Equity Interests in RT Lodge Company, which shall retain the RT Lodge through its subsidiary Reorganized RTI.”

The following is an updated summary of classes, claims, voting rights and expected recoveries showing changes in bold (defined terms are as defined in the Plan and/or Disclosure Statement):

Notwithstanding the foregoing, GS and TCW may voluntarily reduce or defer their distributions under this Article III.C.3 or may otherwise modify the treatment of their Claims under this Article III.C.3 to roll obligations into the Exit Facility to provide for additional liquidity of the Debtors (the “Increased GS and TCW Impairment”) to satisfy, among other things, the Minimum GUC Reorg Payment; provided that nothing herein modifies (1) the requirement under the RSA and the Exit Facility that the Reorganized Debtors have at least $12.5 million in Cash on the balance sheet on the Effective Date or (2) the requirement that Holders of Class 4 General Unsecured Claims receive the Minimum GUC Reorg Payment. In the event there is insufficient Cash to make the payments on the DIP Facility Claims or the Prepetition Secured Debt Claims as contemplated herein and pay the Minimum GUC Reorg Payment, the Reorganized Debtors shall still pay the Minimum GUC Reorg Payment and provide the Note to Holders of Class 4 General Unsecured Claims; provided, however, that nothing herein shall require GS to accept Cash payment in an amount less than described in the RSA on account of its Prepetition Secured Debt Claim. To the extent GS and/or TCW elect Increased GS and TCW Impairment, none of the resulting liquidity shall be considered for purposes of calculating whether there is any Excess Cash or in calculating the amount of any Excess Cash Payments.

FN2 Dollar amounts are in millions and do not include accrued and unpaid interest, fees, expenses and other obligations.

FN3 Amount consists of Existing Letters of Credit in the approximate amount of $9.55 million and prepetition revolving loan advance of $2.0mn. 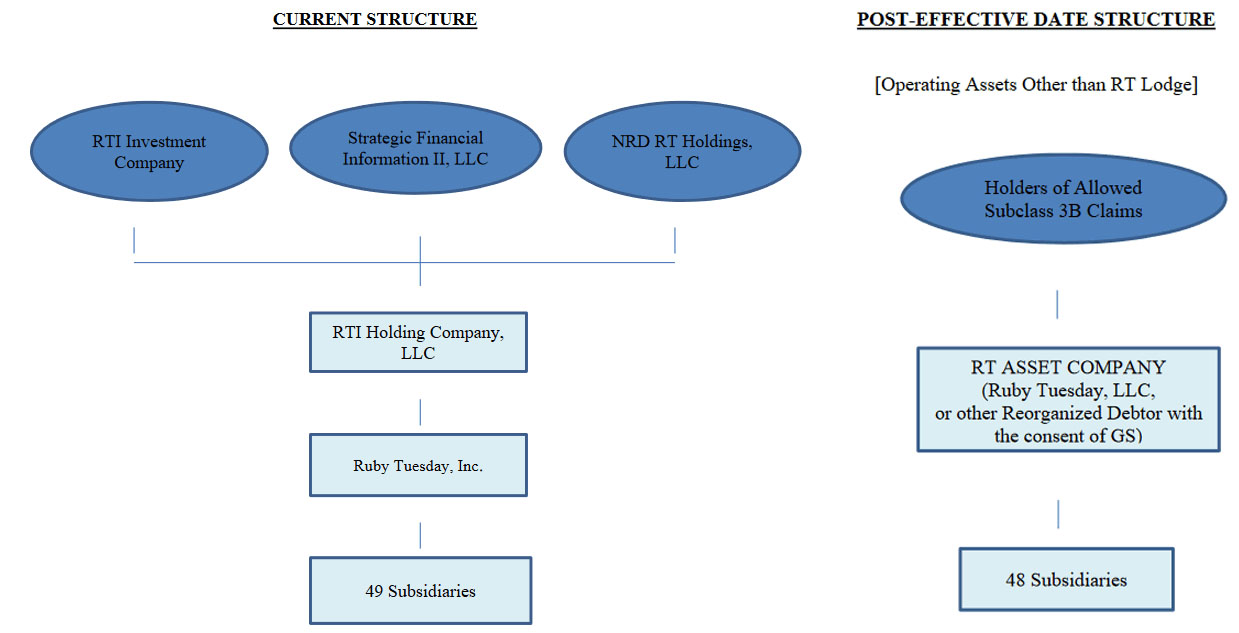 On February 9, 2021, the Debtors’ claims agent notified the Court of the voting results [Docket No. 1090], summarized below:

In December 2017, NRD Capital completed its acquisition of the then publicly traded Debtors (NYSE: RT) in a transaction valued at $335.0mn. In connection with the transaction, the Debtors (i) entered into a new credit facility for a secured term loan in the amount of $115.0mn and a new $12.5mn secured revolving credit facility; and (ii) provided notice of an optional redemption to the holders of its 7.625% Senior Notes due 2020 pursuant to which the Company had elected to redeem $212.5mn in principal amount of the outstanding Notes.

At the time of the acquisition, the Debtors had 596 Ruby Tuesday restaurants (541 owned and 55 franchised), but those number have apparently dropped considerably in recent months, with reports suggesting that the Debtors have "quietly closed" 150 locations during 2020.

In a press release announcing the filing, the Debtors advised that: “Prior to its filing, the Company reached an understanding with its secured lenders to support its restructuring through financing and an agreement regarding the terms of a plan that will provide a sustainable path forward for the restaurant chain. The casual dining favorite plans to use this filing to strengthen its business by reducing liabilities and emerge a stronger organization built for the future. The Company intends to move through the bankruptcy process as quickly as possible. Its restaurants will continue to operate 'business as usual' throughout the reorganization process.”

Shawn Lederman, Ruby Tuesday’s CEO, commented" “This announcement does not mean ‘Goodbye, Ruby Tuesday’. Today’s actions will allow us an opportunity to reposition the company for long-term stability as we recover from the unprecedented impact of COVID-19….Our restructuring demonstrates a commitment to Ruby Tuesday’s future viability as we work to preserve thousands of team member jobs."

Notwithstanding the "understanding" with secured lenders referred to in the press release, board minutes filed with the Debtors' lead Petition do not reference any immediately anticipated debtor-in-possession ("DIP") financing or any formalized stakeholder support.

The Disclosure Statement [Docket No. 762] attached the following documents:

According to the Debtors: “Founded in 1972 in Knoxville, Tennessee, Ruby Tuesday, Inc., is dedicated to delighting guests with exceptional casual dining experiences that offer uncompromising quality paired with passionate service every time they visit. From signature handcrafted burgers to the farm-grown goodness of the Endless Garden Bar, Ruby Tuesday is proud of its long-standing history as an American classic and international favorite for nearly 50 years. The Company currently owns, operates and franchises casual dining restaurants in the United States, Guam, and five foreign countries under the Ruby Tuesday® brand.