November 17, 2020 – The Debtors' Official Committee of Unsecured Creditors (the “Committee”) objected the Debtors’ debtor-in-possession ("DIP") financing motion [Docket No. 142], arguing that, having only been appointed a week ago, they need more time to evaluate a DIP that contains milestones that drive the entirety of the Debtors' cases and do so based on a manufactured need for urgency. In our brief time on the job, the Committee argues, we have already noted several "troubling transactions" and we should be afforded more time to properly evaluate Plan-driving DIP financing before it is too late.

The objection makes clear that the recently appointed Committee's gripe goes well beyond the DIP motion itself, extending to the Debtors' prepackaged Plan, the prepetition lenders' control over the Debtors' unencumbered assets and a senior management content to "strategically enrich itself" through its promotion of a Plan that "would leave general unsecured creditors holding the bag" (and a completely empty one at that).

In addition to its manifestly unfair terms, the Committee argues that (i) the Debtors are inventing a sense of urgency to hasten the adoption of those terms, "[positioning' this case as a melting ice cube, urging that their exit from bankruptcy by year end is both required under the DIP financing agreement and critical from a business perspective. But there is no real exigency here…" and (ii) that the Debtors are attempting to effectively block the Committee from conducting a proper investigation of, among other things, the Debtors’ September 2020 paydown of prepetition and DIP lender Golub’s prepetition secured debt.

A hearing on approval of the DIP motion is scheduled for November 20, 2020.

The objection explains, “The Committee does not object per se to the fundamental terms of the proposed DIP Financing. Rather, the Committee is focused on certain specific aspects of the proposed DIP Financing that go far beyond the line that marks a fair balance between secured lender protections, on the one hand, and protection of the Debtors’ estates and unsecured creditors, on the other. The Postpetition Lenders will, of course, argue it was difficult to provide the DIP Financing and that the objectionable aspects of the proposed DIP Financing are absolutely necessary to protect their investment. No amount of difficulty, however, can justify DIP financing terms that deprive unsecured creditors of basic rights protected by the Bankruptcy Code and of prepetition unencumbered value, particularly when, as here, the Debtors have already filed a plan of reorganization seeking to turnover control of their business to the Postpetition Lenders. This fact alone is sufficient to incentivize the Postpetition Lenders to protect their investment.

The timeline proposed in this case — driven largely by the Debtors’ proposed DIP financing — fails to provide the Committee with any such opportunity. Instead, the Debtors have artificially positioned this case as a melting ice cube, urging that their exit from bankruptcy by year end is both required under the DIP financing agreement and critical from a business perspective. But there is no real exigency here — at least none that is not of the Debtors’ and certain of their stakeholders’ own making.

As proposed, the Debtors’ plan would vest all equity in the newly reorganized Debtors in two of its existing stakeholders: Golub, the Debtors’ prepetition and DIP lender, and Mill Road, the Debtors’ largest prepetition equity holder. These stakeholders began exploring a consensual restructuring with the Debtors as early as June 2020 — more than five months ago. By August 24, 2020, the parties had apparently agreed that the Debtors would commence chapter 11 cases. Yet they waited two more months to file bankruptcy. They did not use this time to engage unsecured creditors. Rather, it would seem that they used the time to implement a strategy that would effectively loot the Debtors’ previously unencumbered assets, leaving nothing at all for unsecured creditors.

The Committee was appointed to protect the interests of these previously unrepresented stakeholders. And while the Committee was only just appointed last week, it has already identified some troubling transactions, the most significant of which is the Debtors’ September 2020 paydown of Golub’s prepetition secured debt. In response to Golub’s initiation of a $6.5 million sweep of the Debtors’ cash accounts, the Debtors agreed to pay down $4.6 million of debt, leaving themselves with just enough cash to last through an anticipated October filing. Critically, the paydown manufactured an immediate need for DIP financing upon commencement of these cases, forming the basis upon which the Debtors and Golub justified the imposition of a blanket lien on unencumbered assets at the first day hearing. Had the $4.6 million paydown not been made, the Debtors almost certainly would not have required $4.5 million in interim DIP funding—and may not have required any DIP financing at all.

But Golub was not the only party to strategically enrich itself during the lead up to these cases. Members of the Debtors’ senior management also received a significant windfall. To that end, not only did senior management receive nearly $700,000 in prepetition bonuses and loan forgiveness in August 2020, but some of them also stand to benefit uniquely from the September 2020 paydown. The Committee understands that until the interim DIP liens were imposed, the Debtors held approximately $1.6 million in unencumbered cash in a segregated account, intended to back approximately $1.9 million of unsecured deferred compensation obligations owing to certain executives. Had Golub not obtained interim DIP liens on the Debtors’ unencumbered assets – and had the Debtors not been forced to make an immediate $4.5 million draw on the DIP – these funds would remain available for distribution to unsecured creditors in these cases, affording what would likely be a 10-15 percent recovery. Instead, this cash is now likely out of reach for unsecured creditors, and the funds backing the deferred compensation obligations – now sheltered by the DIP liens – will likely ride through bankruptcy.

Having concluded their efforts to strategically enrich themselves, the parties seek to put in place the final piece of their strategy: approval of a DIP milestone that would require an exit from bankruptcy just 44 days from now. This timeline would preclude the Committee from undertaking any meaningful diligence as to the feasibility of the proposed plan. It would also preclude the Committee from examining – and if appropriate, challenging – the accuracy of the proposed valuation. And of course, it would effectively prevent the Committee from fully investigating the existence of any other potential sources of value for unsecured creditors that may exist, including claims arising from the transactions that preceded these bankruptcy cases.

The proposed expedited timeline is not necessary – or appropriate – under the facts and circumstances of these cases. This fact is laid bare by the proposed KEIP, which would afford KEIP participants a meaningful bonus even if the Effective Date does not occur until February 28, 2021. In light of this metric – a metric that Golub, as Prepetition Lender, necessarily approved – it is difficult to understand how an extension beyond December 31, 2020 would be harmful to the estates or to the Debtors’ prospects for a successful reorganization. The Committee thus proposes that a 60-day extension of the Debtors’ proposed timeline is appropriate….

The Committee does not per se object to final approval of post-petition financing, but it does object to the Debtors’ foreclosing all possibility for a return to unsecured creditors at the outset of these cases, particularly when the Prepetition Lenders, old equity and management stand to gain from the proposed transaction at the expense of unsecured creditors.”

“Termination Date” shall mean, at the Post-petition Agent’s election, the earliest to occur of: (a) the date on which the Post-petition Agent provides, via facsimile, electronic mail or overnight mail, a Carve Out Trigger Notice; (b) the date that is twenty-five (25) days following the Petition Date if the Final Order is not entered in form and substance satisfactory to Agents and Lenders by such date; (c) the date of the Final Hearing, if this Order is modified at the Final Hearing in a manner unacceptable to Agents and Lenders; (d) the closing date of the sale of all or substantially all of the assets of the Debtors; (e) the date on which the which the Post-petition Debt is Paid in Full; and (f) December 31, 2020, or such later date as Agents and Debtors may agree in writing.

The Debtors' investment banker went through the motions in what was pretty much pre-ordained to be a "fruitless" search for third party financing and in respect of which all roads led to prepetition lender Golub. In a declaration in support of the Debtors' DIP financing motion, [Docket No. 13] the Debtors' investment banker provides: "In this case, obtaining access to debtor-in-possession financing was difficult because all or nearly all of the Debtors’ assets are encumbered under the existing capital structure, which, along with the Debtors’ uncertain financial condition, restricts the availability of, and options for, debtor-in-possession financing. To avoid a protracted and expensive priming fight, which the Debtors could not afford, the Debtors and their advisors believed that their only alternatives were to (a) obtain Golub’s consent to the priming of its liens by a third-party lender, (b) locate a third-party lender willing to provide debtor-in-possession financing on an unsecured basis with priority over that of administrative expenses, (c) find lenders willing to refinance out Golub and provide incremental liquidity, or (d) find junior financing and a new secured lender. Indeed, based on a review of Golub’s lien position and our preliminary analysis of the Debtors’ potential enterprise value, the Debtors believed that there was not an equity cushion available for the Debtors to obtain debtor in possession financing based on priming Golub’s liens over their objections, nor would the Debtors’ business be able to sustain its value during a contested priming fight with Golub.

Given these constraints, all parties contacted were unwilling to provide actionable debtor in possession financing junior to Golub.

Due to the Debtors’ financial position, their existing leveraged capital structure, and the small size of the financing need (which would not generate sufficient return on invested capital to compensate a third-party lender for participating in the financing), the Debtors were unable to identify any interested third-party financing parties. The size of the debtor-in-possession financing request alone did not meet many of the initial qualifications of larger third-party financing sources. Nor were potential financing parties willing to provide financing junior to Golub due to the amount of existing secured debt relative to the Debtors’ financial position (Golub made clear it was not willing to subordinate its first lien position to a third party lender). In addition, any senior financing that did not include Golub’s consent would have inevitably resulted in non-consensual priming fight, which had the potential to draw out these Chapter 11 Cases and result in increased professional costs, threatening the Debtors’ ability to emerge as a viable reorganized entity. For the foregoing reasons, the Debtors determined that reaching out to any additional third party financing sources would be fruitless and unlikely to result in any financing proposals." 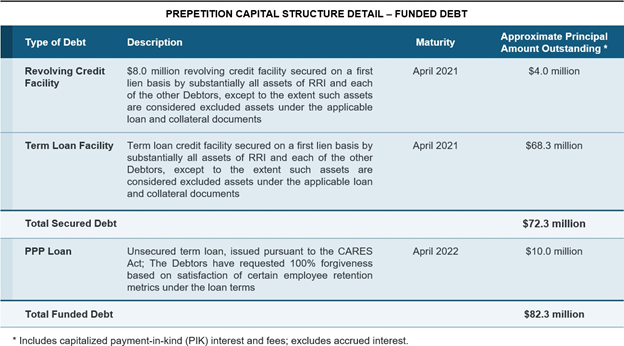