On August 11, 2019, Sanchez Energy Corporation and 10 affiliated Debtors (OTC Pink: "SNEC," “Sanchez Energy” or the “Debtors”) filed for Chapter 11 protection with the U.S. Bankruptcy Court in the Southern District of Texas, lead case number 19-34508. In their lead Petition, the Debtors, an independent exploration and production company focused on the acquisition and development of U.S. onshore unconventional oil and natural gas resources, noted estimated assets of $2.16bn and estimated liabilities of $2.85bn.

In a press release announcing their exit from bankruptcy, the former Debtors…emerging as Mesquite Energy…stated: "In connection with the restructuring and pursuant to the plan of reorganization, the Company eliminated substantially all of the debt from its balance sheet, which totaled approximately $2.3 billion."

Cameron W. George, Mesquite Energy's Interim Chief Executive Officer, commented. “With a clean balance sheet and substantial repositioning of our cost structure, we have taken the hard but necessary steps to become profitable in this low commodity price environment….We have navigated truly unprecedented times, including the ongoing pandemic, global market volatility and a commodity price collapse in which oil prices fell below zero for the first time. Our successful emergence today is a testament to our resilience as a company and the tireless work and commitment of our entire team.”

The press release is also notable for the presence of two names and the absence of one. Named to the emerged Debtors' new Board are Wilson B. Handler of Apollo Global Management Inc. ("Apollo") and Nathan H. Van Duzer is Managing Director, Special Situations at Fidelity Investments ("Fidelity"). Both Apollo and Fidelity were senior secured noteholders (turned DIP lenders), with DIP lenders expected to recover between 11-53% (and that on new money DIP loans). Not named to the Board (and not mentioned at all) is former Sanchez Energy President and CEO Tony Sanchez III.

For Apollo and Fidelity (and other DIP lenders) this has not been much fun. Accused by several groups of unsecured noteholders of being underhanded in their role as DIP lenders long before anyone had ever heard of COVID-19, things absolutely melted down thereafter; with the DIP lenders declaring an event of default (later withdrawn) in respect of the DIP facility at the end of March 2020 (based on the Debtors' inability to file a "credible" Plan on time, afflicted as they were with COVID-19) and with the new money portion (initially $175.0mn but reduced to $150.0mn) of the DIP facility ending up highly exposed.

These DIP lenders have not only lost a large percentage of their DIP commitments but also the totality of their senior secured notes claims ($500.0mn principal); $175.0mn of which was to be rolled-up into DIP-level financing (this supposed, early stage benefit having already reduced to $50.0mn following the objections of unsecured noteholders). Much of the blame for the fiasco will undoubtedly be left to the now (departed?) Tony Sanchez III, whose many supposed operational and ethical shortcomings slowed down the Chapter 11 process long enough to allow the Debtors to be hit by the COVID-19 bus. It is unlikely that he will be forgotten…or missed.

The following is an unchanged summary of classes, claims, voting rights, and expected recoveries showing changes (Defined terms are as in the Plan and/or Disclosure Statement):

The results were as follows:

In a declaration in support of the Chapter 11 filing (the “George Declaration”), Cameron W. George, the Debtors' Executive Vice President and Chief Financial Officer, detailed the events leading to the Debtors’ Chapter 11 filing. The George Declaration states: "…a confluence of events has adversely impacted the Debtors’ businesses. Such events include, among other things, the prolonged and continuing period of commodity price decline and volatility now lasting nearly half a decade, and the resultant and related financial difficulties associated with managing high levels of debt under such market dynamics. Further, a large portion of the Company’s acquisition activity occurred in a substantially higher commodity price environment, leading to the incurrence of significant indebtedness to fund transactions to grow and develop its businesses and resulting in burdensome interest expense obligations that can no longer be serviced by the diminished present and forecasted cash flows from the Debtors’ assets. The Company has also faced unique challenges arising from the integration and management of the large and complex Comanche Assets (as defined below), acquired with a partner in 2017, which rapidly multiplied the size and scale of the Debtors’ businesses. The Debtors were successful in navigating these individual and cumulative obstacles by, among other things, reducing costs, cutting capital expenditures, and taking other proactive measures. However, absent a new money investment and significant deleveraging of their capital structure, the Debtors will soon lack sufficient liquidity to (i) fund ordinary course operations; (ii) invest in a strategic E&P asset development program; and (iii) satisfy the aforementioned ongoing payment obligations under their debt documents."

On the subject of the Debtors' liquidity crunch and the current status of discussions with stakeholders, the George Declaration continues: "In anticipation of potential looming liquidity constraints, earlier this year, the Debtors commenced discussions with both their existing stakeholders and potential third-party investors with respect to a comprehensive recapitalization and/or restructuring solution.

Among the primary drivers of these anticipated liquidity constraints were (i) a $35.2 million interest payment due on July 15, 2019 for the 6.125% Senior Notes (the ‘July 15 Coupon’), and (ii) a $18.1 million interest payment due on August 15, 2019 for the 7.25% Senior Secured Notes… based on the status of those negotiations prior to the payment date for the July 15 Coupon, the Debtors elected not to pay the July 15 Coupon and instead entered a 30-day grace period in respect of such coupon in order to preserve liquidity and continue negotiations with stakeholders as long as possible. Negotiations with the Debtors’ stakeholders continued throughout the grace period. Although the Debtors have not reached an agreement with their stakeholders on the terms of a comprehensive restructuring transaction, the Debtors have secured $175 million of new money debtor in possession financing (‘DIP Financing’) from the members of the Secured Notes Ad Hoc Group (as defined below). 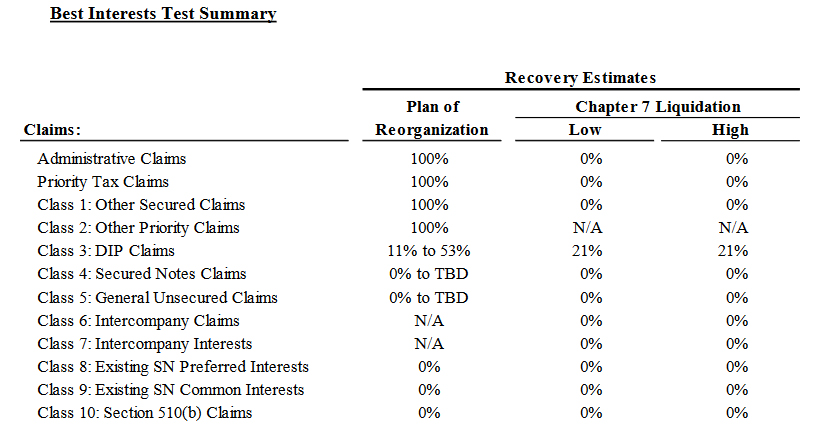 About the Debtors (as described at filing)

Sanchez Energy Corporation (OTC Pink: SNEC) is an independent exploration and production company focused on the acquisition and development of U.S. onshore unconventional oil and natural gas resources, with a current focus on the Eagle Ford Shale in South Texas. Through organic and significant acquisition activities, the Debtors have assembled a strategic, highly concentrated position in the Eagle Ford Shale and are generally considered among the most active operators in the basin. The Debtors, along with certain of their non-Debtor subsidiaries, also hold certain other producing properties and undeveloped acreage, including in the Tuscaloosa Marine Shale (the “TMS”) in Mississippi and Louisiana.