The Debtors, whose October 2020, COVID-driven restructuring efforts raised approximately $1.4bn of new capital, clearly under-estimated the length and impact of the pandemic; with a just commenced pilots' strike, "if prolonged," likely to have a further material impact on the Debtors' liquidity and financial position. In urging the pilots "to end their strike and engage constructively as part of this [restructuring] process," the Debtors note that with stakeholder support they anticipate their ability to "restructure the Company’s debt obligations, reconfigure its aircraft fleet, and emerge with a significant capital injection…in 9-12 months."

In a press release announcing the filing, the Debtors advised that: “The purpose of the filing is to accelerate SAS’ transformation by implementing key elements of its SAS FORWARD plan. These steps are consistent with SAS’ announcement on May 31, 2022, that SAS FORWARD involves complex multiparty negotiations and that the Company might seek to utilize one or more court restructuring proceedings designed to assist in the resolution of SAS’ financial difficulties and help accelerate the implementation of SAS FORWARD. Through this process, SAS aims to reach agreements with key stakeholders, restructure the Company’s debt obligations, reconfigure its aircraft fleet, and emerge with a significant capital injection. SAS expects to complete its court-supervised process in the U.S. in 9-12 months."

The Debtors’ President and Chief Executive Officer Anko van der Werff, commented further: “Over the last several months, we’ve been working hard to improve our cost structure and improve our financial position. We are making progress, but a lot of work remains and the on-going strike has made an already challenging situation even tougher….Becoming a more competitive airline will require the full team’s effort and burden-sharing from all stakeholders. We urge SAS Scandinavia pilots’ unions to end their strike and engage constructively as part of this process."

In a declaration in support of first day filings (the “Hilden Declaration”) [Docket No. 3], Erno Hildén, the Debtors’ Executive Vice President and the Chief Financial Officer, provides: “The COVID-19 pandemic has battered the airline industry. SAS is no exception. Over the past two years, SAS has experienced substantial reductions in revenue directly attributable to the COVID-19 pandemic and measures put in place to prevent it from spreading. These measures, including travel bans, border closings, and social distancing policies, have directly and significantly impacted the demand for air travel. As a result, SAS’s revenues during fiscal years 2020 (the early part of which pre-dated the onset of the COVID-19 pandemic) and 2021 fell approximately 56% and 70%, respectively, compared to fiscal year 2019.

SAS has continued to experience operating losses in the billions of dollars in the past two fiscal years. That financial distress was triggered largely by the emergence of COVID variants, including Delta and Omicron, which caused passenger demand to recover at a much slower pace than anticipated. In that regard, business travel, a critical source of pre-pandemic revenue for SAS, fell dramatically during the last two fiscal years compared to pre-pandemic levels and continues to be substantially below historical levels (particularly in the case of intercontinental travel).

SAS also faces mounting competition in the European markets from low cost and ultra-low cost carriers and in its long-haul markets by network carriers. These competitors generally have lower labor, aircraft and other costs, lower levels of debt, and superior access to equity capital when compared to SAS. Also, the closure of Russian airspace as a result of the ongoing war in Ukraine led the Company to suspend most long-haul routes to Asia. The situation also has led to increased operating costs with respect to the Company’s long-haul traffic and spiking jet fuel prices.

The Company also has been unsuccessful in reaching agreements with labor to reduce labor costs. Indeed, on July 4, 2022, the day before the Commencement Date, the SAS Scandinavia pilots’ unions formally instituted a strike involving approximately 900 pilots.  The strike is expected to result in the cancellation of approximately 50% of scheduled flights for the duration of the strike, which is not yet known. The Company estimates the strike will cause it to lose $10-13 million each day.

Without concessions from these key stakeholders, and in light of the significant uncertainty and strain the labor action places on the Company, the Company concluded it could not complete the necessary debt-for-equity exchange and attract new equity capital from the market. Accordingly, the Company decided it would be prudent to file chapter 11 now, while it continues negotiations with lessors, to maximize its current liquidity runway and finalize its DIP financing (which will lengthen its runway) thereby mitigating the adverse effects of the strike on its cash position and preserving its prospects for reorganization.”

An earlier pandemic-driven restructuring effort was completed in October 2020 with that effort diluting then existing shareholders by approximately 95% and leaving each of the Government of Sweden and the Government of Denmark holding approximately 21.80% of the Debtors' equity (see structure chart below). In addition to converting SEK 2.25 billion of debt to equity, the October 2020 restructuring raised proceeds corresponding to approximately SEK 12 billion before issue costs and hence restore equity by an amount corresponding to SEK 14.25 billion. NB: At the time, the SEK was at about 10.4 to the USD.

Elements of the October 2020 retructuring included:

As of the Petition date, the Debtors had outstanding funded debt obligations in the aggregate principal amount of approximately $1.35bn.

The Debtors provide: "The Company is in well advanced discussions with a number of potential lenders with respect to obtaining additional debtor-in-possession financing for up to USD 700 million (the equivalent of approximately SEK 7.0 billion), to support its operations throughout this court-supervised process."

According to the Debtors: “SAS, Scandinavia’s leading airline, with main hubs in Copenhagen, Oslo and Stockholm, is flying to destinations in Europe, USA and Asia. Spurred by a Scandinavian heritage and sustainable values, SAS aims to be the global leader in sustainable aviation. We will reduce total carbon emissions by 25 percent by 2025, by using more sustainable aviation fuel and our modern fleet with fuel-efficient aircraft. In addition to flight operations, SAS offers ground handling services, technical maintenance and air cargo services. SAS is a founder member of the Star Alliance™, and together with its partner airlines offers a wide network worldwide. ” 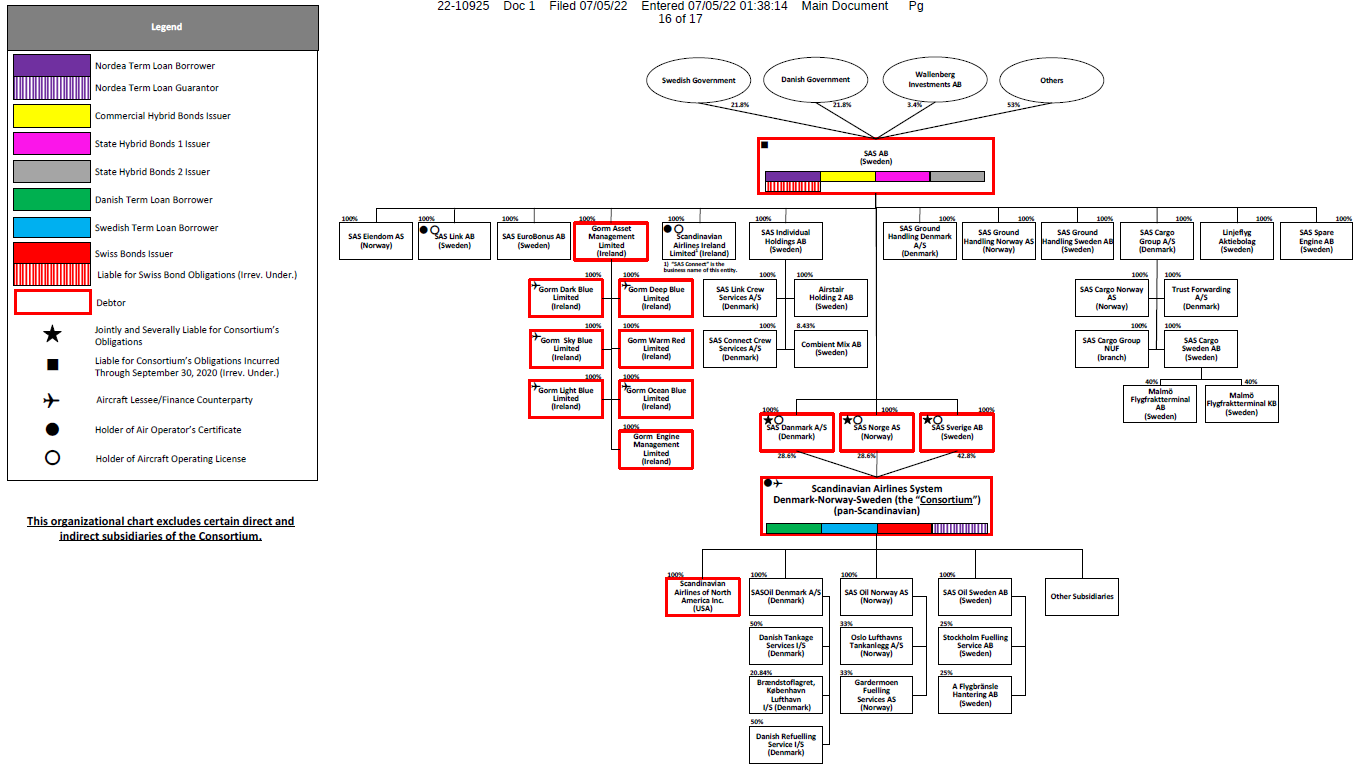