At filing, the Debtors are 27.09% owned by John Fredriksen's Hemen Holding Ltd.

In a press release announcing the filing, the Debtors advised that: “The Chapter 11 cases are opened to facilitate a balance sheet restructuring which will enable Seadrill to continue to operate its modern fleet of drilling units. It is expected that this will lead to significant equitization of debt which is likely to result in minimal or no recovery for current shareholders. As a consequence of the Chapter 11 cases, Seadrill will submit an application to the Bermuda Supreme Court for the appointment of Joint Provisional Liquidators under Bermuda law to oversee the Chapter 11 cases in conjunction with the Board of Directors of the Company.

At the point of filing, Seadrill has approximately $650m in cash and does not require debtor-in-possession financing.”

The Debtors’ CEO Stuart Jackson commented further: “We are working closely with our stakeholders to ensure we achieve an outcome that gives us the flexibility to weather the low points in our industry cycles, whilst positioning us well for market recovery.”

The Slide Back into Chapter 11

The Debtors have been limping along under a series of short forbearance agreements since the middle of September 2020; also the point at which they engaged their current team of legal and financial advisors. Negotiations with lenders as to shifting interest to PIK and renegotiating covenants (ie, net leverage and debt service coverage) had been going on for more than a year before that, with those negotiations ultimately shifting to an unsuccessful effort to develop a consensus around a full-blown restructuring.

On December 16, 2020 the lenders in their "AOD facility" (under which Asia Offshore Rig 1 Limited, Asia Offshore Rig 2 Limited and Asia Offshore Rig 3 Limited are borrowers) "utilised" (ie grabbed) $97.2mn of AOD’s cash contained in restricted accounts to repay a corresponding amount of the $210.0mn outstanding under that facility. These lenders are also amongst those who comprise the "Ad Hoc Lender Group;" whose apparent unwillingness to support a proposed restructuring and refusal to extend their own forbearance agreement is apparently what ultimately pushed the Debtors into Chapter 11 (with AOD facility borrowers seeking shelter first, see further below).

On January 15th, the Debtors announced that they would not make the semi-annual 4% cash interest payment (there was also a 2% PIK element to the interest which was nominally made) due on that date in respect of their 12.0% senior secured notes due 2025 (the “Notes,” issued in connection with the earlier bankruptcy).

On February 7th, the Debtors announced that those Asian affiliates that were AOD facility borrowers had filed for Chapter 11 (in the same bankruptcy Court as the present filing), noting that: "As a consequence of the Chapter 11 filings, the forbearance agreement announced by the Company on 3 February 2021 in respect of nine out of the group's twelve senior secured credit facility agreements has terminated [these are the forbearance agreements first arranged on September 15, 2020]." These February 7th cases are to be administered with those filed on February 10th.

Not included with the Debtors are those 29 affiliates (collectively, "Seadrill Partners") which filed (again, same Court) on December 1, 2020; these cases are to be administered separately The  Debtors do not intend to seek joint administration of these chapter 11 cases with the Seadrill Partners Cases.

The Debtors have struggled, however, to build the requisite consensus amongst their senior secured lenders who have provided financing to the Debtors across 12 silo-ed credit facilities and hold "disparate views…about the proper approach to this restructuring."

The Debtors provide [Docket No. 25]: “Seadrill has been engaged in active negotiations with creditors across its capital structure for the better part of the last year, including with a coordinating committee of various lenders under the Company’s 12 secured credit facilities (the ‘CoCom,’ and such lenders, the ‘SCF Lenders’), an ad hoc group of SCF Lenders (the ‘AdHoc Lender Group’), and an ad hoc group of holders of 12.00% senior secured notes due 2025 (the ‘NSN Group,’ and together with the CoCom and the Ad Hoc Lender Group, the ‘Secured Lenders’).

Over the past several weeks, Seadrill was nearing an agreement with the CoCom on the terms of a proposed restructuring. But the Ad Hoc Lender Group opposed the plan and refused to provide a forbearance for the facilities it controlled, including the AOD Facility. Thus, despite Seadrill’s continuous efforts, the Company was left in a default without a forbearance on certain facilities, and faced the threat of enforcement by the Ad Hoc Lender Group. To avoid such enforcement and the accompanying destruction of value, the Debtors have filed chapter 11 petitions to obtain the benefit of the automatic stay while they continue to operate their business and negotiate with their various stakeholders in an effort to maximize the value of the estates."

At filing the Debtors had the following indebtedness: 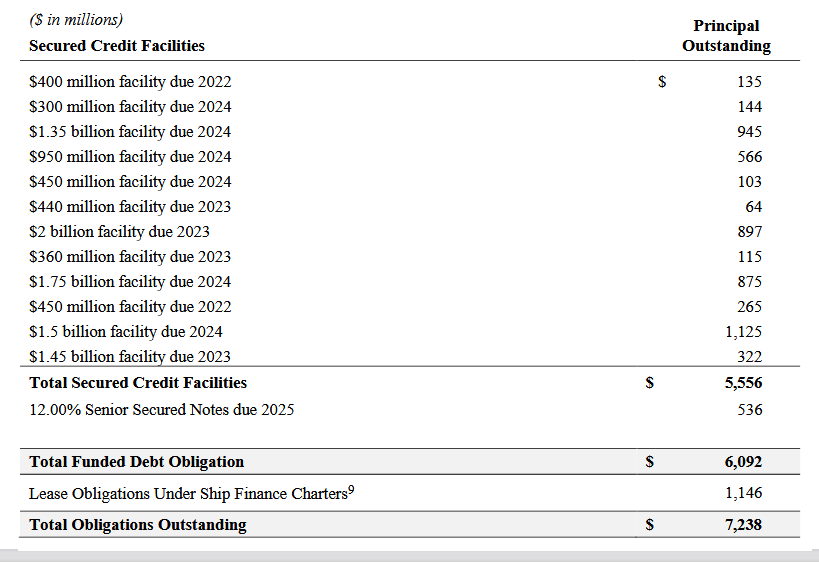 The following table shows just how silo-ed the Debtors 12 credit facilities are and why the Debtors ultimately failed to build consensus across their senior lender group: 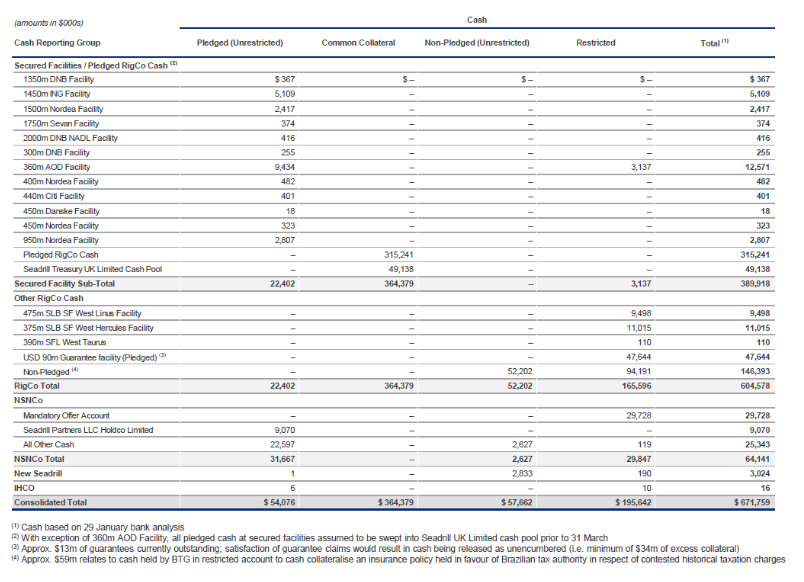 According to the Debtors: “From shallow to ultra-deep water, in both harsh and benign environments, the Debtors set the standard in offshore drilling. The Debtors safely unlock oil and gas resources, helping their customers to deliver energy around the world. The Debtors’ customers include super-major and major oil & gas companies, state-owned national oil companies, and local independent offshore exploration and production companies."

The Debtors latest 20-F adds: "We are an offshore drilling contractor providing worldwide offshore drilling services to the oil and gas industry. Our primary business is the ownership and operation of drillships, semi-submersible rigs and jack-up rigs for operations in shallow to ultra-deepwater in both benign and harsh environments. We contract our drilling units to drill wells for our customers on a dayrate basis. Typically, our customers are oil super-majors, state-owned national oil companies and independent oil and gas companies.

Through a number of acquisitions of companies, second-hand units and newbuildings, we have developed into one of the world's largest international offshore drilling contractors. We own 35 drilling rigs and we manage and operate 20 rigs on behalf of Seadrill Partners, SeaMex, Sonangol, Sonadrill and Northern Drilling.

We are recognized for providing high quality operations, in some of the most challenging sectors of offshore drilling. We employee 4,538 employees across the globe. We are incorporated in Bermuda, and have worldwide operations based on where activities are conducted in the global oil and gas industry."

FIC Restaurants, Inc. – Operator of Friendly’s Restaurants Files Chapter 11 After Years of Loss-Making Operations Topped Off by COVID-19; Will Liquidate After Sale ($2mn Base Price) to Amici Partners Group