In October 2012, private equity house Advent acquired a controlling interest (now 60%) in the Debtors for an undisclosed amount (rumors were @3.0bn) from Ares Management LLC ("Ares") and the Ontario Teachers’ Pension Plan ("OTPP"), with these two funds remaining as minority shareholders.

In June 2020, Apollo Capital Management (having reportedly bought $600.0mn of deeply discounted first lien loans), Angelo Gordon & Co. and Gamut Capital Management LP sued Advent, seeking to "block a transaction the company is pursuing with a group of mutual-fund managers who hold a larger block of Serta’s debt." That legal challenge was successfully rebuffed at the time, at least to the extent it looked to enjoin the Debtors from proceeding with the restructuring proposal championed by Eaton Vance, but as described further has not been resolved in the two and half years since.

In a press release announcing the filing, the Debtors advised that: “SSB has entered into a Restructuring Support Agreement with key financial stakeholders that will significantly reduce the company’s debt and enable the company to continue making critical investments in its business and brands. To implement the restructuring contemplated by the agreement, most of SSB’s U.S. corporate entities have initiated a voluntary pre-arranged court-supervised process under Chapter 11 of the U.S. Bankruptcy Code.

Today’s filings do not include SSB’s Canadian or Puerto Rican operations.

The restructuring will substantially reduce the company’s funded debt from approximately $1.9 billion to approximately $300 million and enable the company to continue making critical investments in its business and brands. The company has received a commitment for a $125 million exit ABL Credit Facility available upon SSB’s emergence from Chapter 11."

Shelley Huff, the Debtors' CEO, added: “With the support of key financial stakeholders, we are taking steps to strengthen our financial position. After the conclusion of this process, we will have a stronger financial foundation to drive profitable growth and continue delivering the high-quality, innovative products that our company is known for. Looking ahead, we will remain focused on launching new innovations, further building a high-performing and resilient supply chain and expanding the commercial side of our business to meet demand for our trusted brands and products.”

The Restructuring Support Agreement (attached as Exhibit B to Docket No. 29) has been agreed to by approximately 81% of the company’s first lien, first out priority term loan lenders and approximately 77% of its first lien, second out priority term loan lenders (collectively, the “consenting creditors”), as well as a majority of SSB’s existing equity holders (the “consenting equity” [ie Advent]).

As set forth in greater detail in the Plan, the Restructuring provides that:

The Disclosure Statement [Docket No. 29] attaches the following exhibits:

Under the Plan, the Debtors will also enter into (a) a new term loan credit facility in the aggregate principal amount of $300,000,000.00 (plus original issue discount), and (b) a first lien asset-backed revolving credit facility, which, as of the Effective Date, will roll up or replace the DIP Facility, to provide the Company with working capital to fund its business postemergence.

The effects of the Restructuring can be summarized as follows (NB: New Term Loan amount shown excludes original issue discount. Exit ABL Facility will be subject to a minimum draw to be determined. Excludes capital lease obligations):

The Debtors have obtained debtor-in-possession ("DIP") financing commitments from lenders led by Eclipse Business Capital LLC ("Eclipse") as agent in the form of a $125.0mn ABL Credit Facility (inclusive of a $10.0mn letters of credit facility). The DIP will augment the Debtors' "approximately $170 million of cash on hand as of the filing date, and cash generated from the company’s ongoing operations," to "support the business during the court-supervised process." The DIP financing will roll into exit financing of an equal amount with Eclipse continuing as agent.

As of the Petition date, the Debtors owe approximately $150.0mn in respect of trade debt and other potential liabilities. The Debtors consider $30.0mn of these non-vital.

Advent owns approximately 60% of the equity interests in Dawn Holdings, Inc., the Debtors’ ultimate parent. The remaining equity is owned by, among other holders, Ares, OTPP, certain current and former employees and directors of the Company, and the founders and other prior owners of Tuft & Needle.

In a declaration in support of first day filings (the “Linker Declaration”) [Docket No.], John Linker, the Debtor’s CFO provides: “In addition to its looming maturities and unsustainable capital structure, the Debtors face financial challenges as a result of the downturn of the mattress industry generally.
The U.S. bedding industry has been subject to significant disruptions recently, including a decline in industry demand beginning in 2022 as a result of slower economic growth caused by recent geopolitical and macroeconomic uncertainty, as well as reduced consumer spending as a result of higher interest rates. Prior to the demand headwinds, the industry faced significant inflation in raw materials costs, supply chain disruptions, and the adverse market effects created by the COVID-19 pandemic. While the fundamentals of the Debtors’ business remain strong, the Debtors are facing significant debt maturities in 2023.

…the Restructuring is the culmination of a years-long effort on the part of the Debtors to right-size their balance sheet. Since 2019, in conjunction with operational initiatives designed to grow its sales, the Company has been seeking a transaction that would reduce its debt and provide the working capital necessary to carry out its long term plans. As for many companies, the onset of the COVID-19 pandemic put significant pressure on this process and the Company’s business at large, threatening to derail its efforts. In response to these challenges, in June 2020, the Company closed a recapitalization transaction with certain of its existing secured lenders. Referred to herein as the “2020 Transaction,” upon closing, the Company received an infusion of $200 million in new money through a new, super-priority PTL Facility, which allowed the Company to weather the economic downturn.

Under threat from the 2020 Transaction Litigation, and with significant maturities looming in 2023, the Company redoubled its efforts to find a strategic partner, including engagement with plaintiffs in the state court action to attempt to negotiate the terms of a settlement. While settlement discussions were ultimately unsuccessful, in January 2023, the Company and the PTL Lenders reached agreement with respect to the terms of a recapitalization transaction, culminating in the Restructuring Support Agreement and the Plan.

According to the Debtors: “Serta Simmons Bedding (SSB) is one of the leading global sleep companies. With a 150-year heritage in delivering industry-leading sleep solutions and a mission to help people sleep better so they can live healthier lives, the company is headquartered in Doraville, GA, and owns top brands such as Serta®, which has five other independent licensees, Beautyrest®, Tuft & Needle® and Simmons®.”

The Linker Declaration adds: "The Debtors manufacture, sell and distribute their bedding products to individual consumers through a number of channels. The Debtors primarily sell their products in the United States through dealers which, in 2022, included approximately 2,200 authorized independent retailers,
including one or more mattress specialty stores, as well as furniture stores, department stores, furniture rental stores, mass merchandisers, and juvenile specialty stores. The Debtors also sell their products (i) to hospitality customers, such as hotels, casinos and resort properties, through SSB Hospitality, LLC; (ii) to third party resellers, who purchase overstock and discontinued models through four (4) warehouses operated by World of Sleep Outlets, LLC; and (iii) directly to consumers through their e-commerce platforms and retail stores. The Debtors also license their intellectual property for use by third party manufacturers of bedding products." 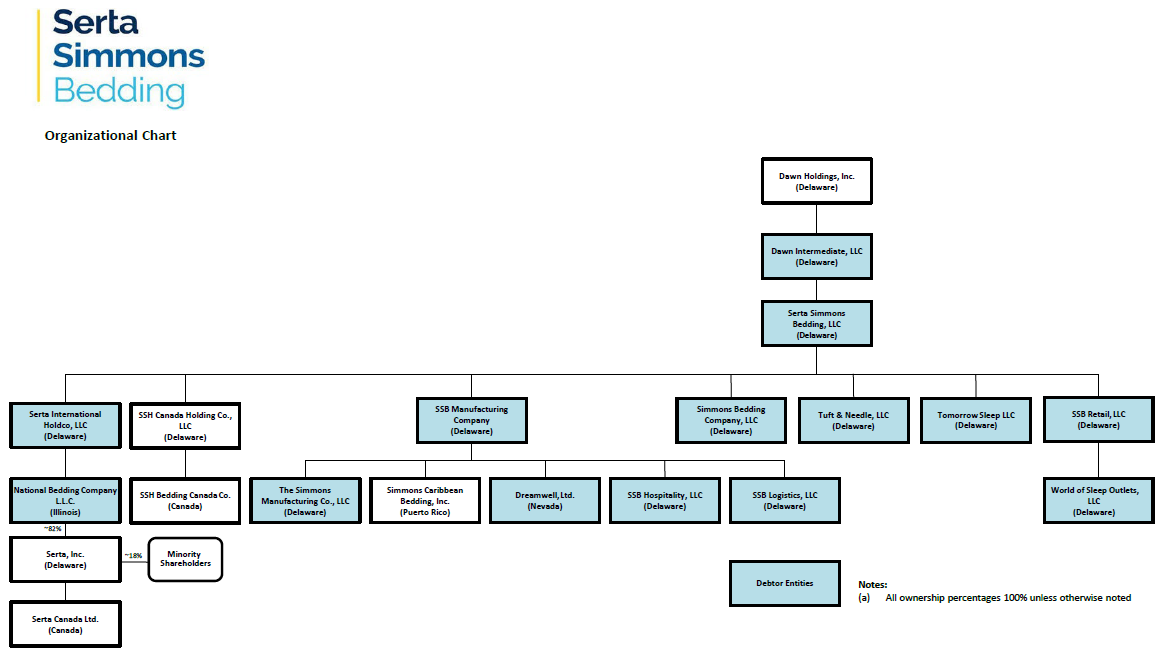