In March 2014, the Debtors were acquired by an entity indirectly owned by funds managed by London-based private equity firm Charterhouse Capital Partners LLP (“Charterhouse”) for a reported $2.3bn.

The Debtors first circulated their Plan and Disclosure Statement (now filed at Docket Nos. 17 and 18, respectively) on June 14th and, although they are touting it as a "pre-packaged" Plan, are soliciting votes from holders of first and second lien claims sitting in impaired classes 3 and 4.

In a press release announcing the pre-packaged Chapter 11 filings, Skillsoft advised that it: “has entered into a Restructuring Support Agreement ('RSA') with an overwhelming majority of its first and second lien lenders. The RSA is expected to result in a comprehensive de-levering of the Company’s balance sheet by reducing the Company’s existing first lien and second lien debt to $410 million from approximately $2.0 billion, with total debt (including working capital financing) aggregating $585 million, lowering the Company’s annual cash interest by approximately $100 million (the “Restructuring”).

As of the date of this release, holders representing approximately 81% in value of the Company’s first lien debt and 84% in value of the Company’s second lien debt have executed the RSA, indicating their commitment to support the Restructuring. The Restructuring is expected to provide the Company with significant additional liquidity and a right-sized pro-forma capital structure, while minimizing operational disruptions by ensuring all holders of general unsecured claims, including the Company’s vendors, suppliers, and other trade creditors, will be paid in full. Additionally, it is expected that no employees will be affected as a direct result of the Restructuring, ensuring that Skillsoft customers continue to be well-served."

John Frederick, Skillsoft’s Chief Administrative Officer, commented, “While our core business remains strong, with attractive profitability and cash flow characteristics, our debt levels are too high. We need to invest further and that requires our debt levels to come down to free up cash to further enhance our offerings. We look forward to benefitting from a stronger balance sheet and enhanced financial flexibility as we continue investing in new products, solutions and content to drive value for our customers and growth in the business. We appreciate the broad support of our lenders, who will become the new owners of the Company and recognize the inherent value in the Skillsoft brand. We also thank the entire Skillsoft team for their ongoing hard work and commitment to our company and our customers and are grateful to our vendors and business partners for their continued support.”

The RSA (attached to the Plan at Exhibit A) provides, among other things, that:

The Frederick Declaration (defined below) sums up: "The Restructuring provides that:

The Frederick Declaration provides: "Skillsoft has commenced these chapter 11 cases to implement a prenegotiated, comprehensive consensual restructuring (the 'Restructuring') through a prepackaged plan of reorganization that will substantially delever the Company by reducing its balance sheet liabilities from approximately $2.1 billion in funded debt to approximately $585 million in funded debt upon emergence."

The following is a summary of classes, claims, voting rights, and expected recoveries (defined terms are as defined in the Plan or Disclosure Statement):

The Frederick Declaration provides: "The Company, with the support of the Consenting Creditors, may enter into an exclusivity agreement with a potential third party purchaser of substantially all of the Company’s business and is continuing negotiations with this party regarding a potential Alternative Transaction (as defined in the Restructuring Support Agreement). In light of the Company’s deteriorating liquidity position, immediate need to access the DIP Facility, and the need for the certainty of a fully-agreed reorganization path if the Company does not consummate a transaction with the potential third party purchaser, the Company has commenced these chapter 11 cases (with the support of the Consenting Creditors) and is seeking to implement the Restructuring contemplated by the Restructuring Support Agreement; however, if the ongoing 1negotiations with the third party are ultimately successful, the Company, may seek to amend the Plan and Disclosure Statement (to the extent it obtains the support of the Consenting Creditors) to reflect the Alternative Transaction prior to the Confirmation Hearing.

In a declaration in support of the Chapter 11 filing (the “Frederick Declaration”), John Frederick, the Debtors’ Chief Administrative Officer, detailed the events leading to the Debtors' Chapter 11 filing. The Frederick Declaration provides: “A combination of factors has led to the Company’s present restructuring. In recent years, the Company experienced customer attrition as a result of, among other reasons, steep market competition that has been exacerbated in recent years by the entry of global enterprise technology companies into the space in which the Company operates. The Company’s core markets have also seen aggressive growth from companies that provide free access to certain services that overlap with services that the Company provides its clients, serve as aggregators of services similar to those provided by the Company, and/or specialize in a subset of the services offered by the Company. The friction the Company has faced in adapting its business model to address market shifts in a timely matter, along with inconsistent growth across the Company’s core business segments and integration issues with recent acquisitions, such as SumTotal, have also limited the Company’s ability to use its resources to their full potential.

Like so many others, the Company is also facing adverse near-term business consequences from the macroeconomic effects of the COVID-19 pandemic. While the Company has been successful in operating under its business continuity plan and has kept its operations largely uninterrupted in the midst of this global crisis, COVID-19 has or may impact several of the Company’s key business initiatives, including Percipio migrations and content development. The Company and its advisors also project that COVID-19 may result in decreased order intake and delayed customer collections in FY21, which could decrease the Company’s operating liquidity significantly.”

The Debtors have arranged a $60.0mn debtor-in-possession (“DIP”) financing facility to be provided by certain of its first lien prepetition lenders and with Wilmington Savings Fund Society, FSB, serving as administrative agent. Certain of these lenders have also committed to provide the Debtors with additional liquidity upon exit from the restructuring process in the form of a $110.0mn exit facility, less any amounts outstanding under the DIP financing, which will be rolled into the exit facility upon emergence . 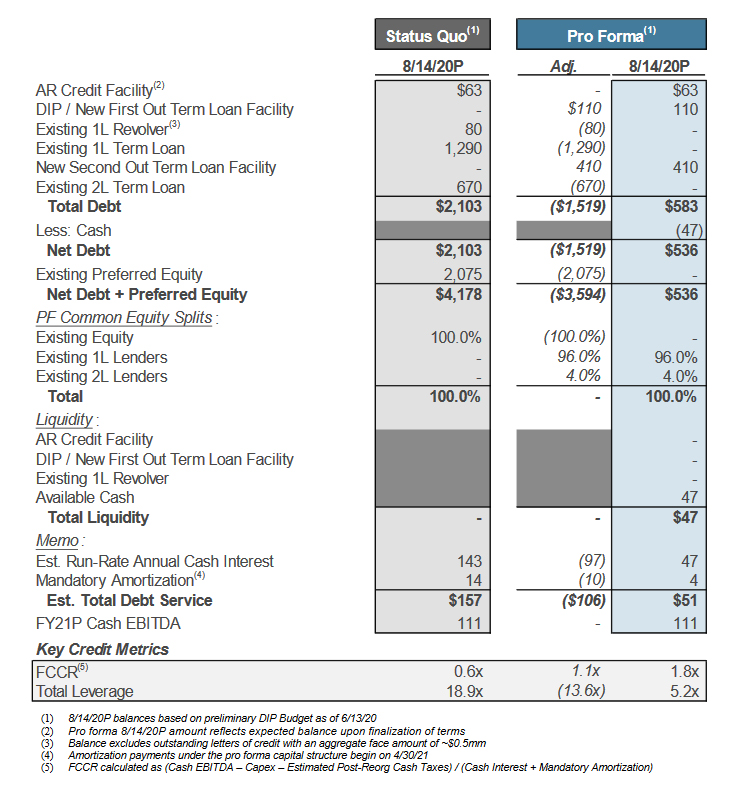 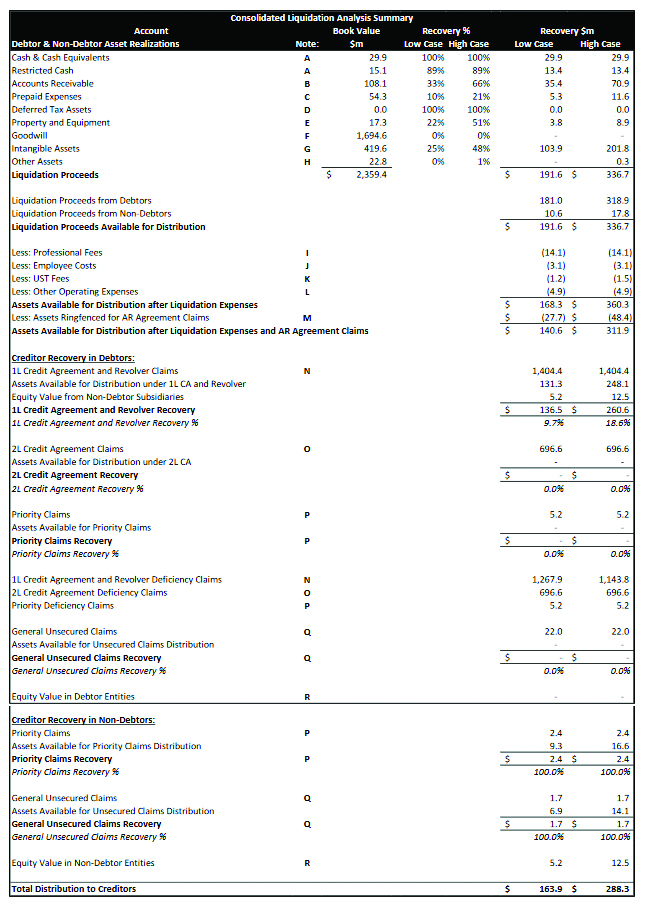 According to the Debtors: "Skillsoft delivers online learning, training, and talent solutions to help organizations unleash their edge. Leveraging immersive, engaging content, Skillsoft enables organizations to unlock the potential in their best assets – their people – and build teams with the skills they need for success. Empowering 36 million learners and counting, Skillsoft democratizes learning through an intelligent learning experience and a customized, learner-centric approach to skills development with resources for Leadership Development, Business Skills, Technology & Development, Digital Transformation, and Compliance." 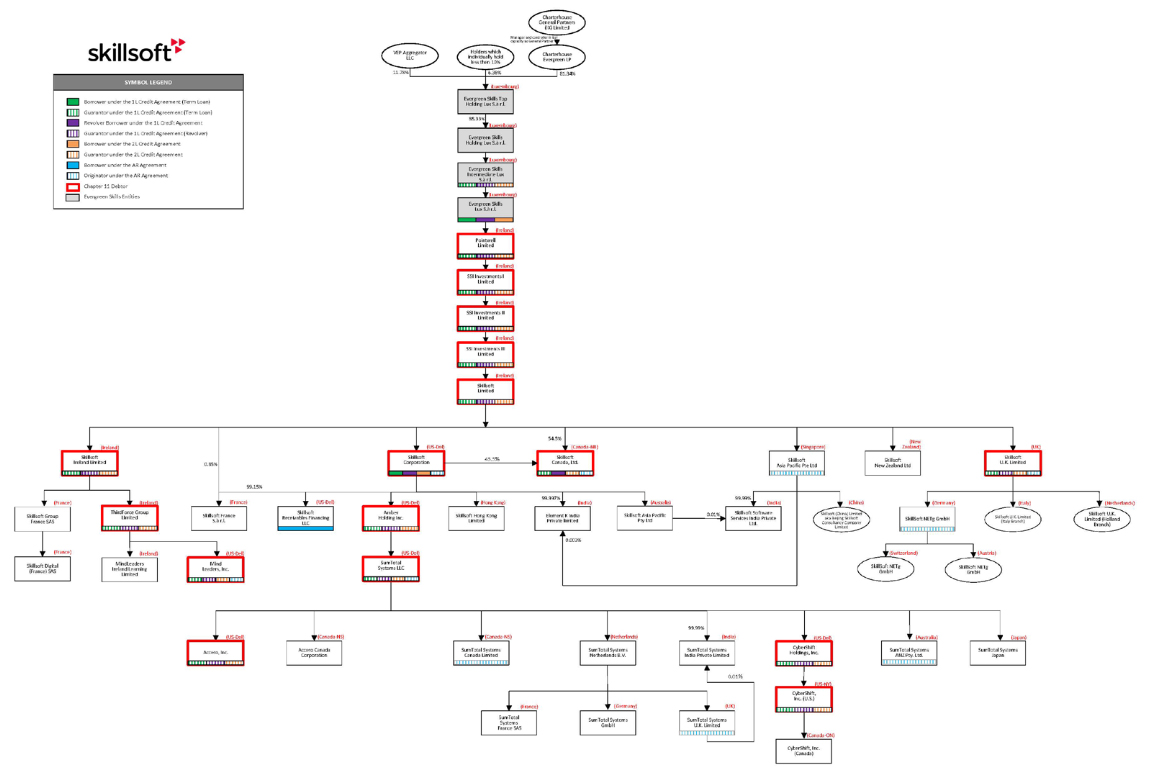